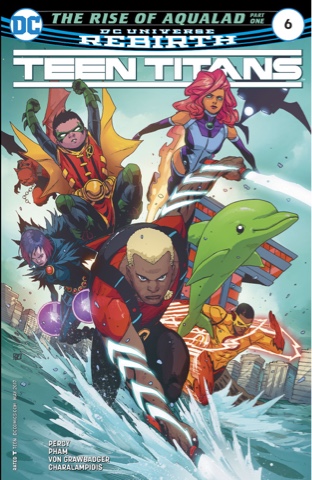 The big deal this issue is the addition of new Aqualad Jackson Hyde to the book. He's front and centre on the main cover by penciller Khoi Pham and colourist Jim Charalamipidis. He shares the spotlight on Chris Burnham and Nathan Fairbairn's variant with Starfire. And the story officially starts, with the title and credits, when he appears on page 10.
It's what comes before that, though, that had me excited... page after page of the existing Titans members hanging out, swapping banter as a mystery bubbles in the background.  There's Beast Boy and Robin exchanging pleasantries... 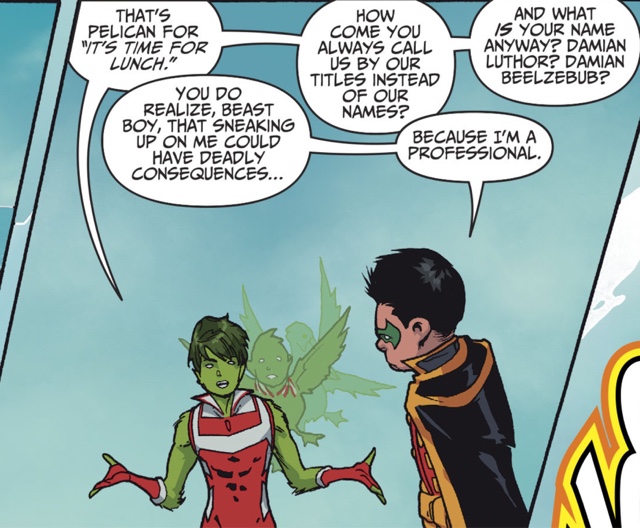 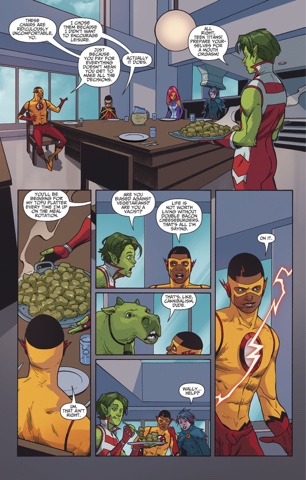 ... and plenty more. The fun continues as an alarm triggered at the San Francisco Titans Tower brings more of a nuisance than a threat, in the shape of a TV interviewer arranged by the limelight-loving Gar.

Writer Ben Percy straddles a line that has the members not breaking the Fourth Wall, but almost in on the joke. It makes for the best this book has been since it kicked off with a League of Assassins story that quickly became tiresome.
As for Jackson, introduced nearly a year ago in the DC Rebirth Special and unseen since then, he has potential; his water control powers and tattoos recall a pre-2011 version of Jackson, with the most obvious difference being newly blonded hair. Where previous Jackson has a girlfriend, this one has a boyfriend, Kenny... but not for long. Kenny seems rather easily weirded out for a kid living in the DC Universe, which makes for a nice change; some people just want a quiet life and a person who hasn't yet come to terms with his sexuality isn't likely to be comfortable on the verges of the metahuman community. He's run off, but he's likely to live a lot longer. Maybe someone can introduce Jackson to that nice Bunker boy.
The mystery this issue involves people going missing in the waters of San Francisco Bay following a big breakout from a local jail. Events build nicely to a superb cliffhanger splash.
Percy and Pham make a terrific team, with Pham nailing the comedy beats as accurately as the drama, whether it's the scary moments or the quieter concerns Jackson's mother has for her son. Veteran inker Wade Von Grawbadger keeps things looking sharp while the colours or Charalampidis are neither too bright nor too dull - on the porridge scale they're just right. 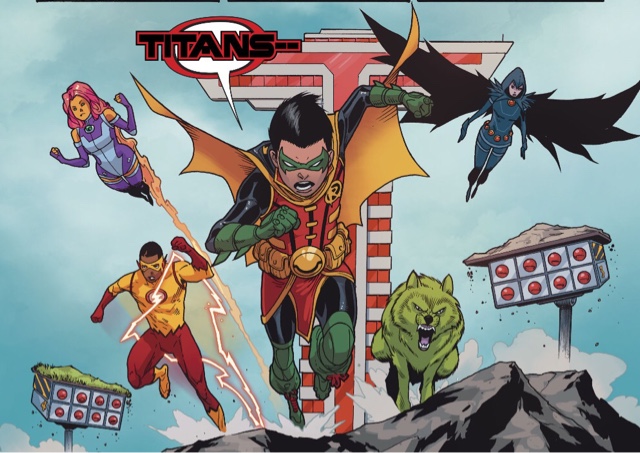