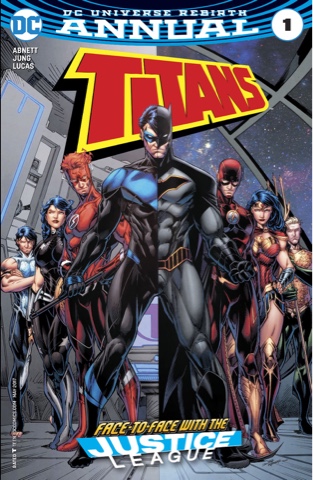 Eight people in a locked room. No one knows how they got there. Confusion turns to paranoia. Accusations are made. Secrets emerge.
No, it's not 1997 sci-fi thriller Cube, it's the 2017 Titans Annual as writer Dan Abnett continues to stir the DC Rebirth mystery meat pot. He's been at it over a year now, since the Titans Hunt mini-series, and he's not disappointed me yet.
This issue? Maybe a little.
So yes, the set-up has Nightwing, Donna Troy, Tempest and Wally West Flash transported, individually, into an impregnable stronghold. Also there are Batman, Wonder Woman, Aquaman and Barry Allen Flash. Because they arrived individually, no one can be sure anyone else is who they say they are. 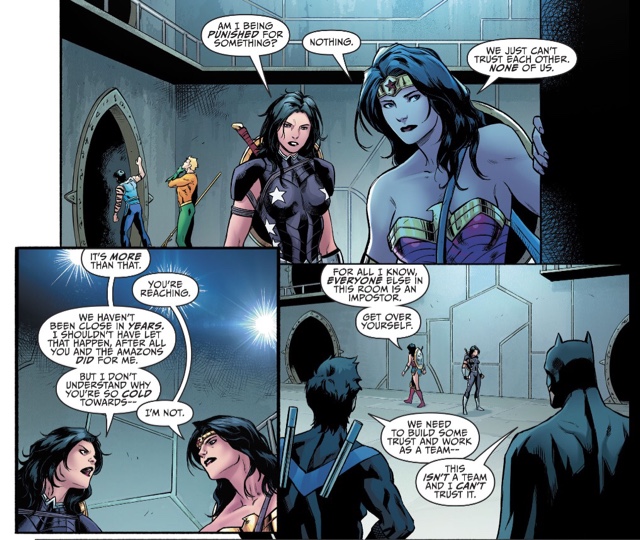 That's a bit of a weak 'because'. Admittedly, the DC Universe is full of shapeshifters, able to duplicate people done to the molecular level. Some of them, like Martians, also have telepathic powers that might allow them to convince others of things, sow the seed of paranoia and amplify it.
But Batman and Nightwing have known one another for a couple of decades. Barry has been around Wally half his life. And so on. What's more, Aquaman has telepathy.  Wonder Woman has a lasso able to compel truth. 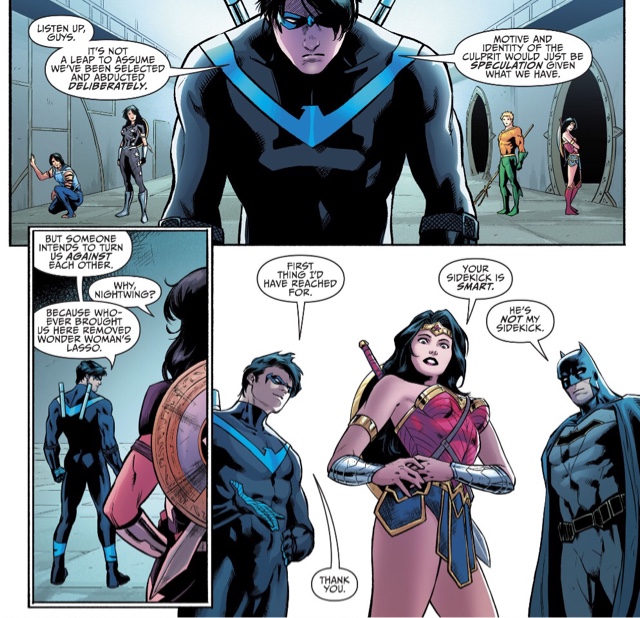 Oh. Well, Aquaman has telepathy and all these people know one another well enough to feel whether they're the people they say they are. So when Batman refuses to give Dick a pass, or Diana treats Donna like this... 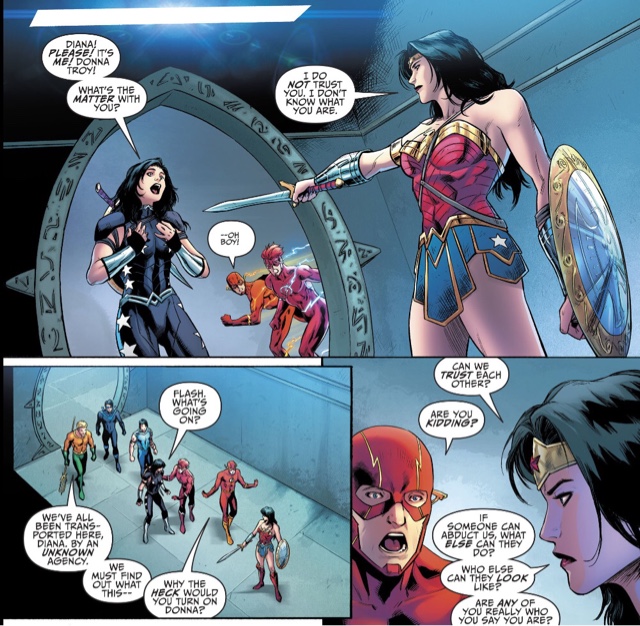 ... it doesn't ring true. What does convince is the cackling villainy of the guy running the show. 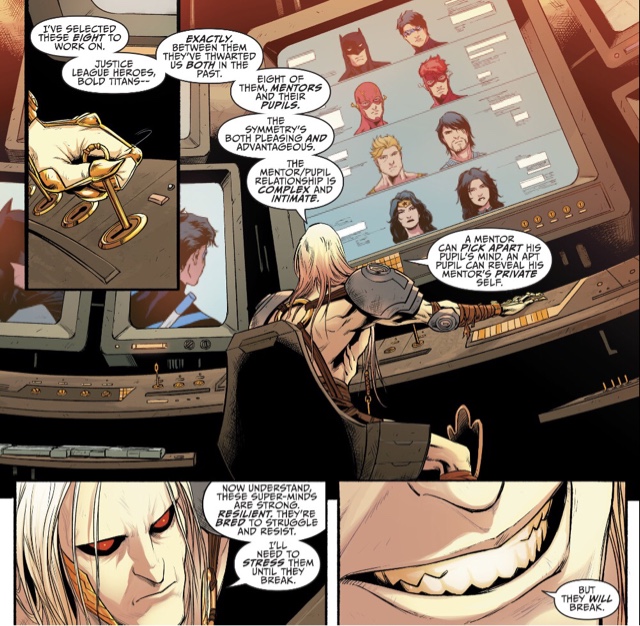 The Key is one of my favourite JLA villains. Sadly, he hasn't got his old key-shaped headdress on, but he is recognisably the guy from the League's heyday. And this time he's in league with several mystery someones.
Despite my problem, there's a lot to like in here. Abnett gives us pen portraits of the Titans, Leaguers and how they relate in this post-Flashpoint, rebirthing world. It can be a bit awkward, but it was ever thus. 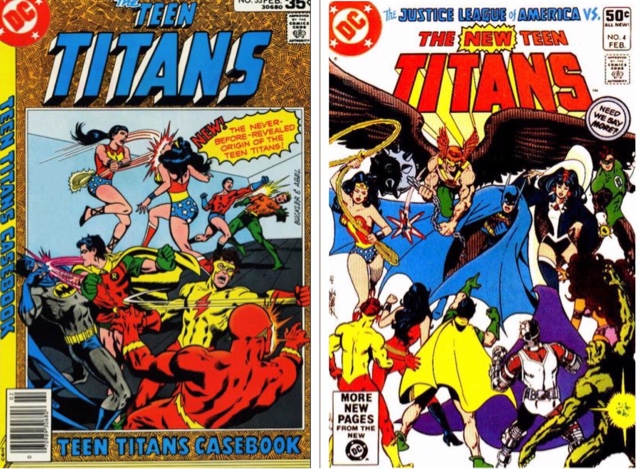 A game of 'who's the leader?' is, on the one hand, amusing; on the other, it's a bit depressing that two groups whose members are so linked, who have overcome so much, can't calmly work together immediately, with one big exception. 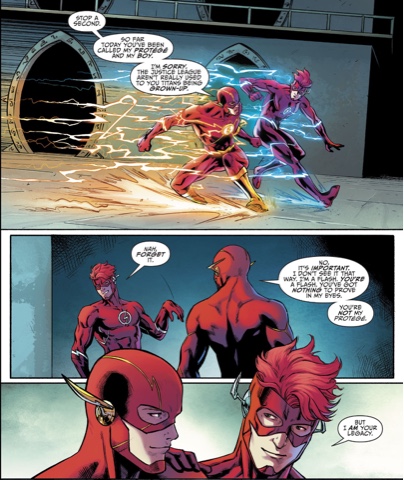 The most disheartening relationship is that of Donna and Wonder Woman, there's barely anything there. Diana is outright nasty. I gave up on the current, Greg Rucka-written Wonder Woman series, so I'm not sure if her mood is connected to that book's storyline in which she's learned that Everything She Knows is Wrong! Mind, she seems certain enough of Donna's beginnings. 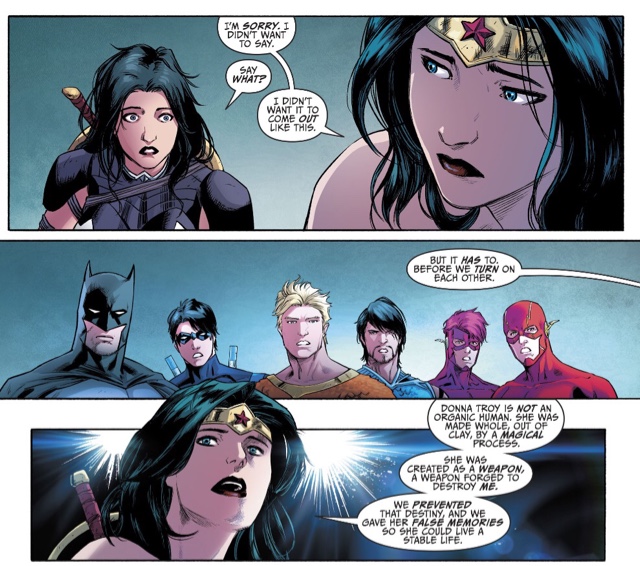 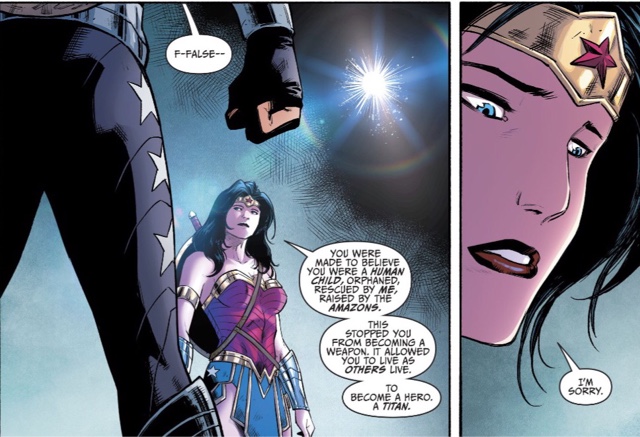 That's the origin from the David and Meredith Finch Wonder Woman run, and while here it sounds like a pure copy of Diana's traditional beginnings, believe me, there it's a lot more unpleasant. Abnett does readers a favour by glossing over the details, but boy, I hate that Donna is presented as still being made of magical clay - the few writers over the years who treated Diana as a golem were way off base, she was a clay doll made human by Olympians. And if Donna was made the same way, she's just as human.
Kubert School graduate Minkyu Jung recently worked on Nightwing but didn't make as big an impression as he does here. He makes storytelling look easy, with sharp panel-to-panel transitions, body language and expressions. Jung really shines in the fight scenes, producing a dynamic ballet, one beautifully coloured by Adriano Lucas. 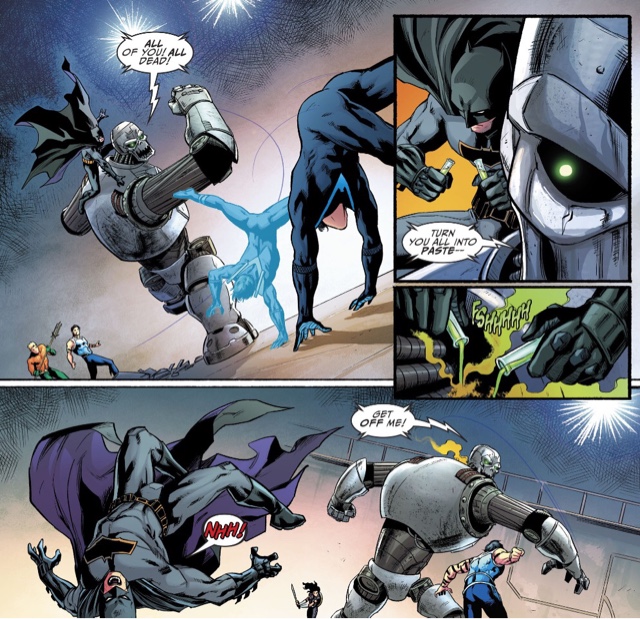 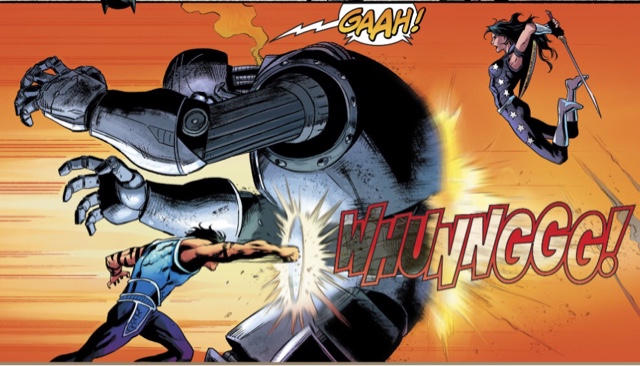 The art's not perfect - he's not mastered low-angle shots - but I'm excited to see what happens when he gets a regular series. That's a hint, DC.
The regular Titans artistic team of penciller Brett Booth, inker Norm Rapmund and colourist Andrew Dalhouse - credited as simply 'artists', which is a nice nod to teamwork - give us a striking cover.
The book ends on a note of mystery, but I'm fine with that; this issue provides enough story to satisfy me while stoking the fires of the ongoing DC Rebirth riddle.
But I don't half want to give Donna a hug.
Adriano Lucas Andrew Dalhouse Brett Booth Dan Abnett DC Rebirth Minkyu Jung Norm Rapmund Titans Annual #1 review