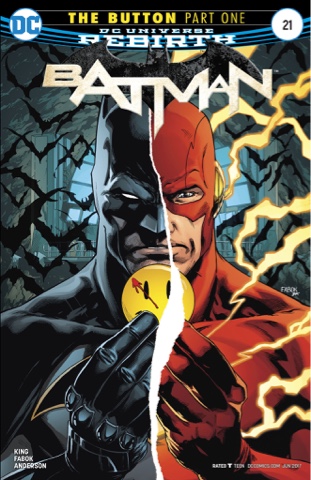 This is the one we've been waiting for - it's the return of the Samuroids! 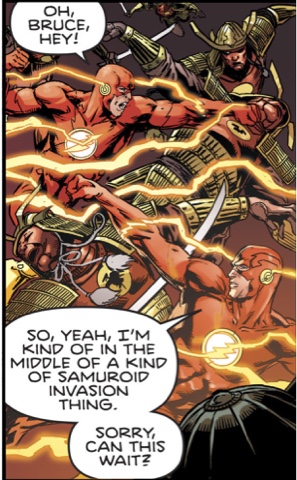 Not seen since, I think, 2008, the Silver Age Flash villains are back and on amazing form. It takes Barry Allen at least a minute to defeat the katana-crazy robots. Meanwhile, back at the Batcave, Batman is flipping ... flipping the smiley face button he recently found in his lair. As he mulls over what it might mean, a TV screen shows a game of ice hockey. 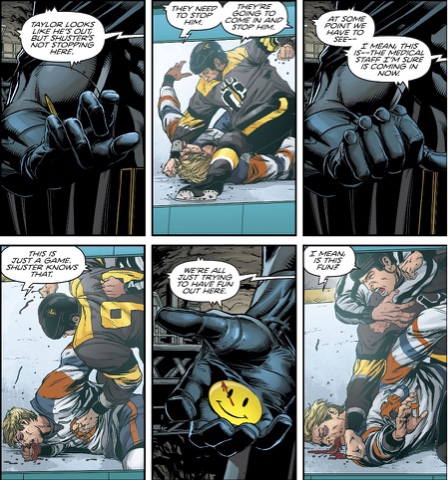 One viewer is not enjoying the match. 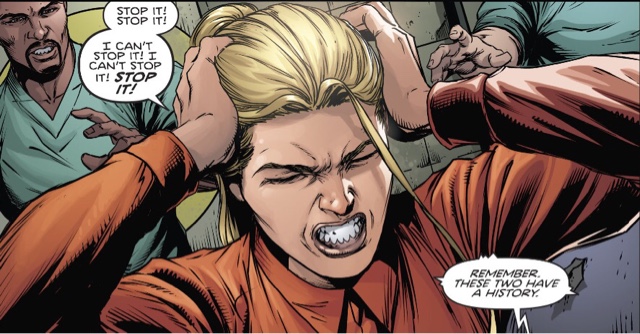 It's Saturn Girl of the 31st-century Legion of Super-Heroes, locked up in Arkham Asylum for the Criminally Insane for some unrevealed reason. Where the other patients see an especially brutal sports fixture, Imra recalls - imagines? - an apocalyptic superhero battle.
Back at the Cave, Batman tosses the button aside and it lands by Psycho Pirate's Medusa mask. 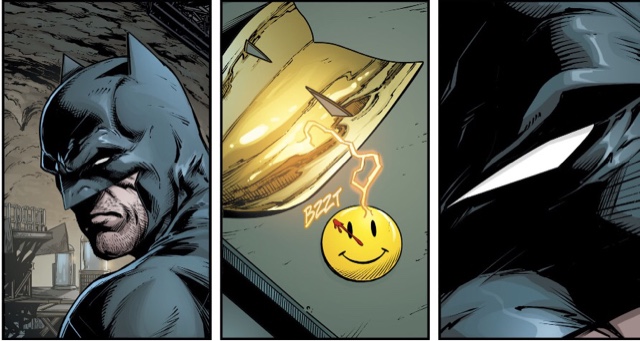 The Caped Crusader calls Barry Allen and tells him what happened - they've been trying to figure out where the bloodied button with the otherworldly radiation comes from - and that's when we see the Samuroids. 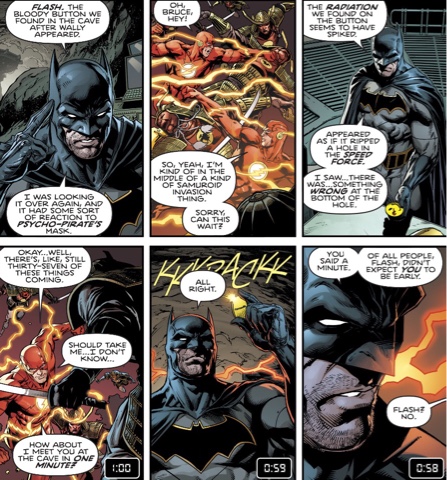 A minute isn't very long... unless you're being pummelled by the Fastest Villain Alive, who shouldn't actually be alive. 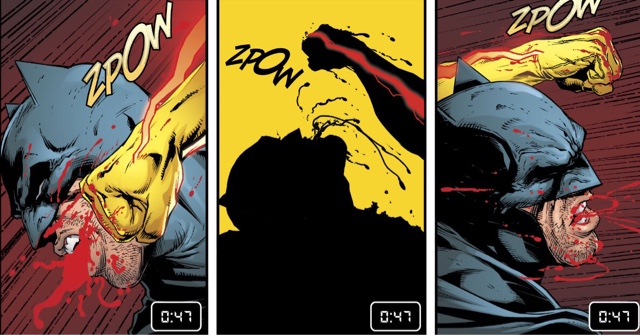 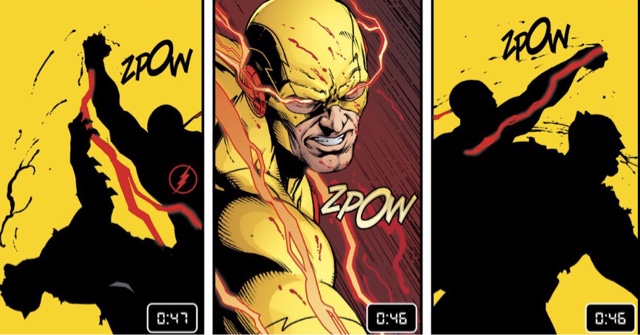 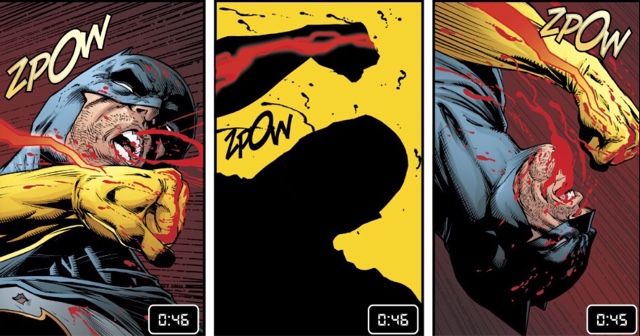 By the end of the fight Batman is a crumpled mess. And Professor Zoom? Dead again. He looks into the face of God and is struck down. This recalls the old Green Lantern story in which an alien, Krona, dared to watch the creation of the universe and pretty much kicked off the Crisis on Infinite Earths. The button story is linked to the overarching DC Rebirth mystery which has readers suspecting the current DC Universe has been created by Dr Manhattan from The Watchmen. 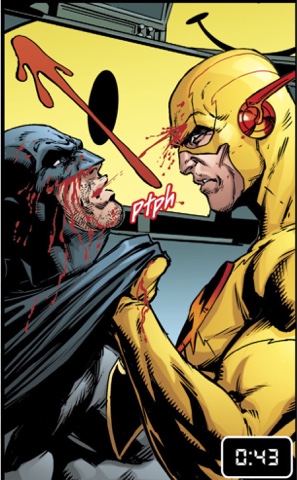 This issue certainly has plenty of nods to the Alan Moore/Dave Gibbons series, from the dual narrative to the nine-panel grids to the blood Batman spits at Zoom (and may I just say, Bruce, Alfred brought you up better than this) mirroring the red streak of the Comedian's button.
The button having a connection to the Medusa Mask makes sense, it belonging to the Psycho Pirate, one of the few people who remembers the Multiverse that was wiped out by the Crisis. Why Reverse-Flash is back I can't guess, but it's good to see him as he's one of the few DC villains who really brings the fear factor, being utterly mad, hate-filled and fast enough to kill you, and everyone you've ever known, in a flash.
Writer Tom King loves his formalism - his Omega Men series with Barney Bagenda sees him playing with repeated structures to great effect - and he seems to be having fun here. The way the innate tension of the countdown to the Flash's arrival dictates the story beats is impressive. I could have lived without two pages of Batman-playing-with-button alternating with the ice hockey, because panels of someone flipping a pseudo coin is dull, and sports commentary is extremely dull. Still, if Alan Moore could have his tedious pirates in Watchmen, Tom King can have his sports and flipping.... and I don't doubt he's going to knit things together in a fascinating manner. I'm already intrigued by callbacks to the Flashpoint event. 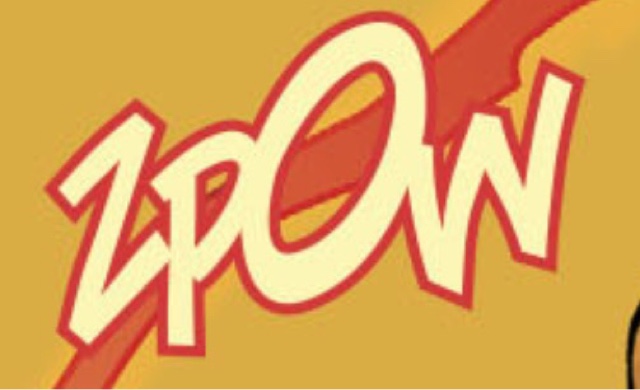 Jason Fabok's artwork is strong and sharp and a total treat, he draws a fantastic Batman, an equally good Flash and a nightmarish Professor Zoom. Coupled with the colouring of Brad Anderson, this is compelling work - those panels of Zoom pummelling Batman, echoing the villain's colours, are outstanding, and ZPOW! may be the best character-specific sound effect ever. 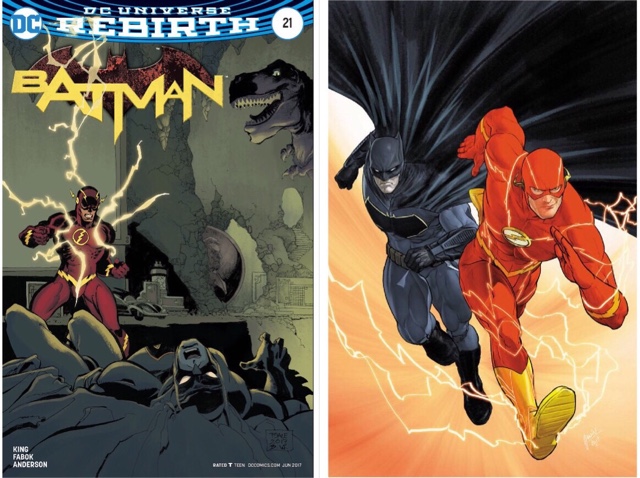