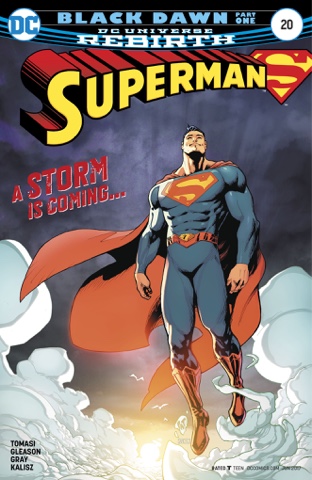 It's a lovely spring day in Hamilton County. Jon Kent is seeing if he can fly. 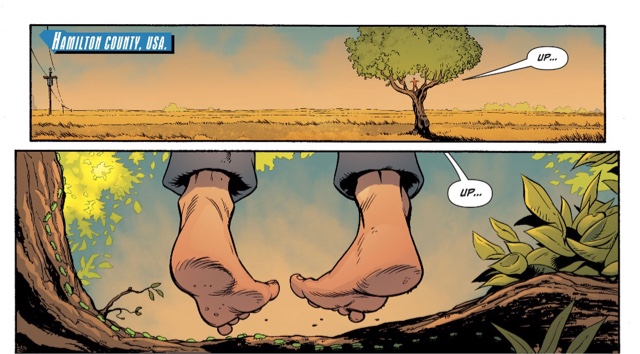 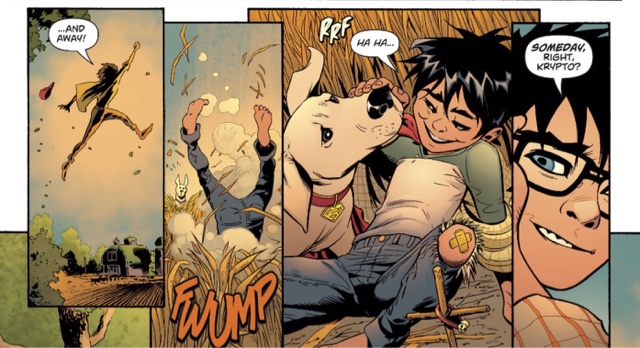 He can't.
Clark Kent is causing people to,look up, up in the sky as Superman.
And Lois Lane Kent White Smith (long story) is getting used to being plain old Lois Lane Kent once more.

Back Indoors, the darkness brings visitors from Gotham City. Bats are attracted to barns, but Lois isn't having it and orders Batman and Son into the house. 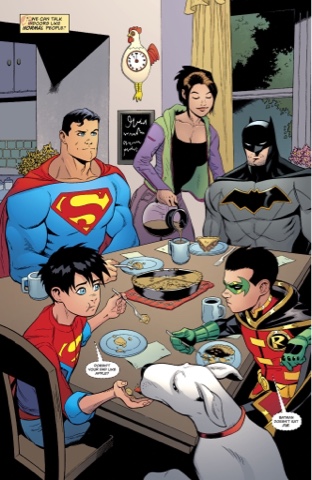 Pleasantries over, Batman gets down to business. He's analysed Jon's body chemistry in a bid to work out why Jon's recently arrived super powers have been cutting out. He doesn't have answers but Batman does have information. 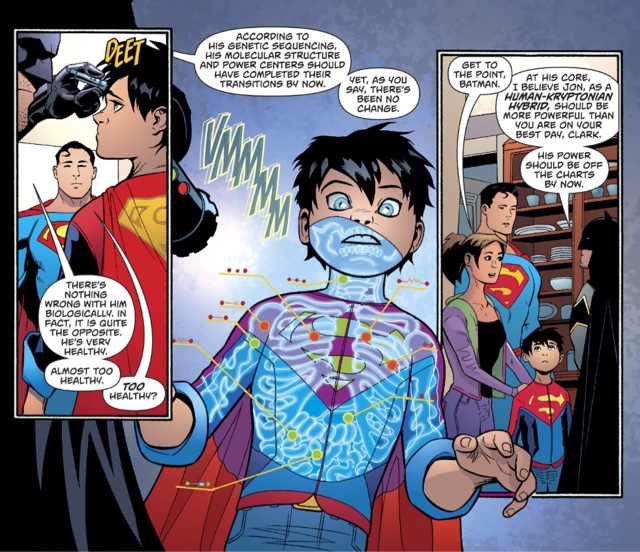 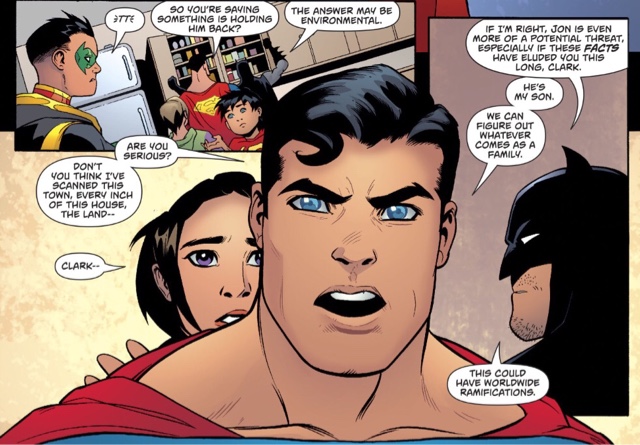 Now there's a surprise. I assumed that a child of Lois and Clark would at best gain half his father's power levels, but if Bruce is correct, that's rather exciting for Jon.
And worrying.
What could be stunting Jon's development? It has to be environmental factors, thinks Batman. 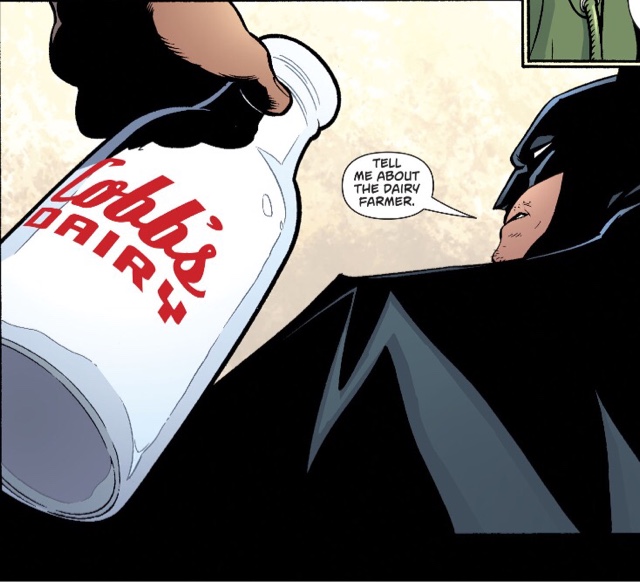 I think we all saw that coming and I agree, homogenised milk is the work of the devil. Time for the Caped Crusader to meet creepy Cobb Brandon's Bovine Bruiser, Bessie...
After the excitement of the Superman Reborn arc it's lovely to have a breather issue. Sure, there's action down on the Cobb Farm, but most of this issue is character work - small happenings and conversation. There's no infodump relating to the merging of two Supermen and two Loises - I expect that to come in Action Comics - just a day in the life of an almost-ordinary family and their weird 'relatives'.
The usual writing credits are reversed this time, with Patrick Gleason listed before Peter J Tomasi, so I'm taking it he had more input into this issue; I can't tell and that's a compliment. The partnership between these two guys is seamless by now, as they produce one of the most consistently enjoyable, high quality comics around. The Kents - and how lovely to be able to write that again without a qualifier - are as delightful to be around as ever, while Bruce adds a touch of spikiness that only emphasises who Superman is. 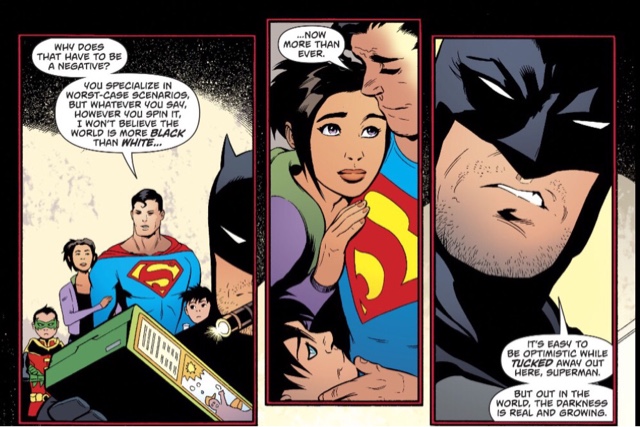 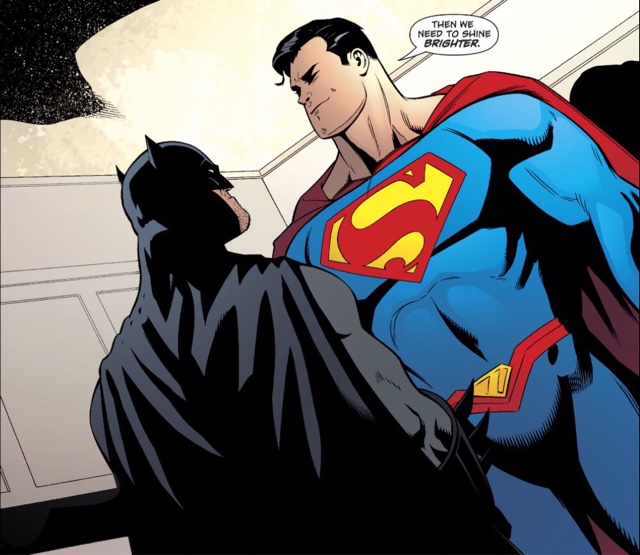 And Damian is the toned-down version I like best, not so much arrogant assassin as very smart smartarse ... which isn't to say he doesn't mind his manners around Clark and, especially, Lois.
While I'm no fan of the Bat-God version of Batman, I do like being reminded that he trained in the sciences, so it's a small thrill to see him as Superman's go-to where the mysteries of Jon are concerned. And how cool is that machine he uses on Jon? I'm sure I had a projector toy that did that.
That's the work of Gleason the ace penciller, with inks by Mick Gray, who sounds lovely. I can't remember where I first saw Gleason's work - probably Aquaman, about three relaunches back - but it's terrific to see how he's grown, building on his strengths while eliminating such weaknesses as occasionally awkward jawlines. Here there's consistently great storytelling, and every page has some little extra. It's tough to pick a favourite, given the strong linework of Gleason, wonderfully liquid inks of Gray and always appropriate colours of John Kalisz. Rarely has an art team been so equally accomplished at sunny and moody scenes. If pushed, it's a toss-up between dinner with the Kents and Batman's Brandon farm recce.
Actually, it's this... I love seeing a chap so goofily in love with his wife. And is it an accident that Gleason's depiction of Superman's telescopic vision is more like 'binocular vision', giving the impression of hearts as he looks at his wife and son? I doubt it. 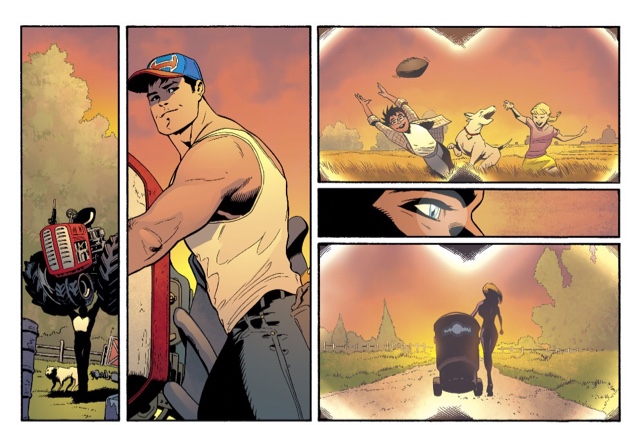 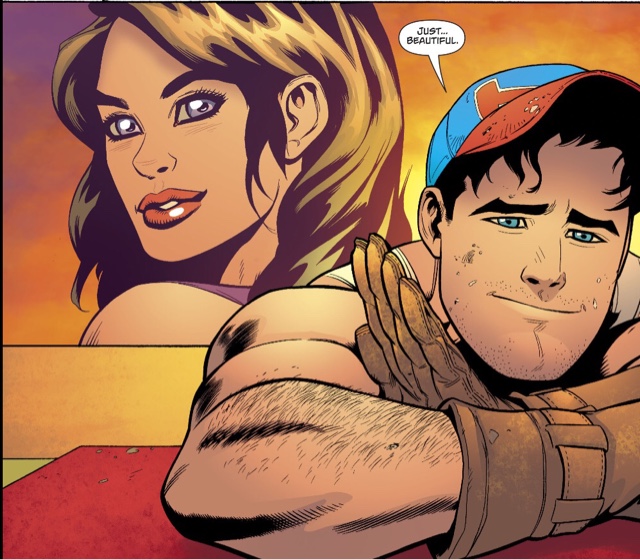 Oh, and I smiled at the little red and blue birds accompanying Superman on his splash page flight. Maybe the souls of the extra Lois and Clark going to heaven? 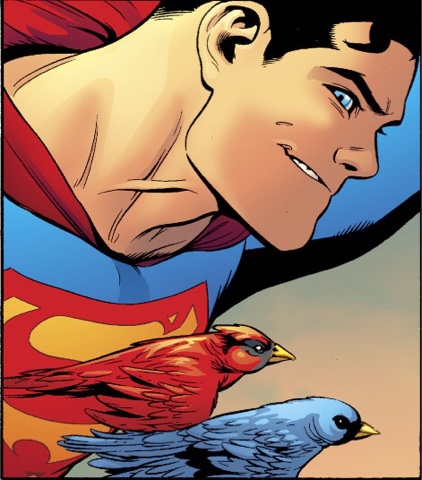 Gleason and Kalisz gift us the gorgeously optimistic cover a new beginning deserves, while the variant by Jorge Jimenez and colourist Alejandro Sanchez is stupendous- look at how even Superman's 'shadow self' seems friendly as heck. And to think the spit curl was apparently banned in the New 52. 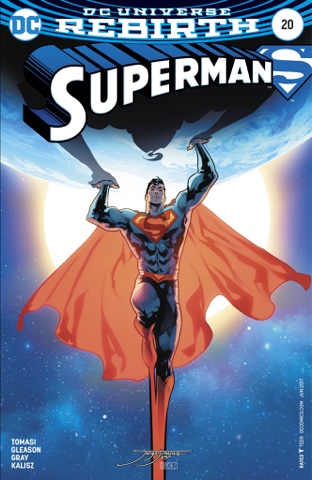 If you know of an old Superman fan who isn't reading this series, grab them and put them onto it – they'll think it's all their birthdays at once.
Alejandro Sanchez John Kalisz Jorge Jimenez Mick Gray Patrick Gleason Peter J Tomasi Superman #20 review