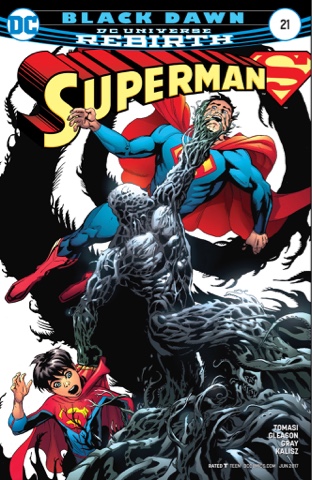 Jon Kent and Damian Wayne wake up to learn Batman is missing. He left while the kids, Clark and Lois were sleeping, determined to find a connection between the milk of neighbour Cobb Branden's cow, Bessie, and Jon's super-arrested development. Before they can go and investigate, who should come calling but Cobb himself, and his granddaughter, Kathy. Bearing gifts. 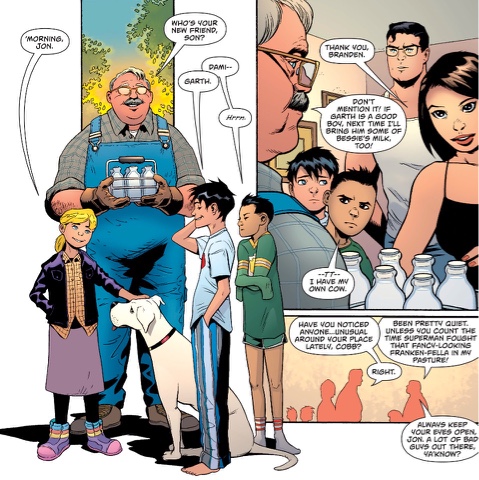 More of that infernal milk. And if there was any doubt Clark no longer trusts Cobb, it's in that Man of Steely glare.

As he leaves, Cobb seems to recruit Krypto as a spy. 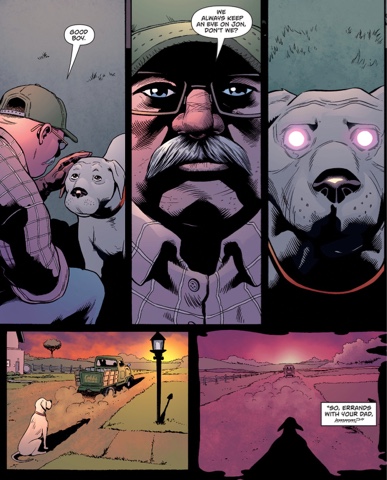 So far I've been thinking Cobb a nuisance, able to get away with ... whatever because Clark and Lois have been too busy to notice his shenanigans. But if he can mentally control a Superdog, Cobb really is a threat to the family. Even more so if he's this chap. 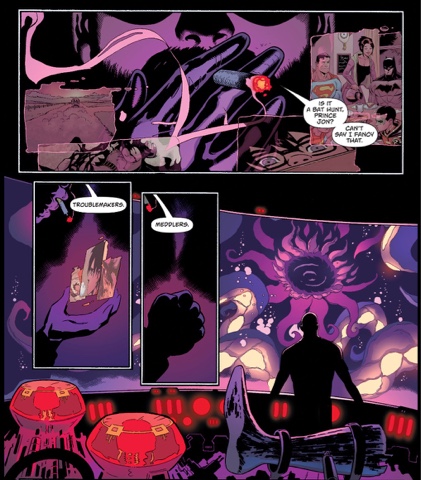 A foot as a trophy? A cigarette? How many old Superman villains with a cosmic background smoke? Terra Man, maybe. I'll admit it, I'm stumped, but sticking with my Brainiac guess - certainly, he'd have access to an interplanetary zoo of the type that might supply such monsters as we see this issue. Just keep them shrunk for ease of handling and enlarge to order!
As Superman and the Super Sons search for Batman, Cobb brings his 'distraction' into play at the Hamilton County State Fair (Hamilton seems to throw these every other week). 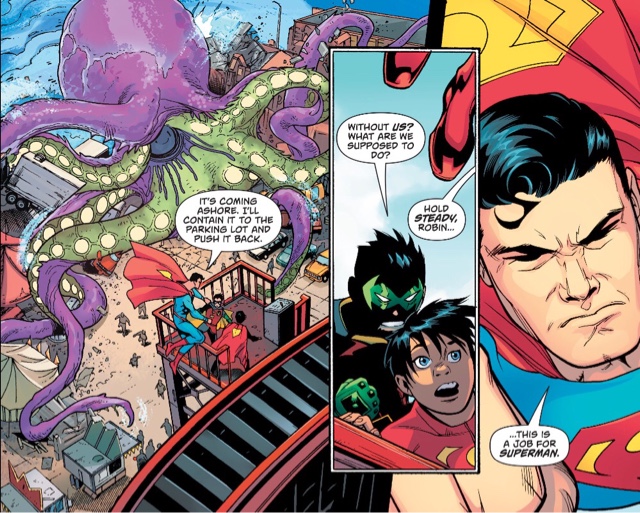 Now that's a distraction - the giant octopus monster Clark and Jon fought months ago in Alaska, that was controlled by space crystals. Superman tells Jon and Damian to stay put while he fights the beastie, but when a second line of menace appears, inky humanoids, they've no qualms about jumping into the fray. 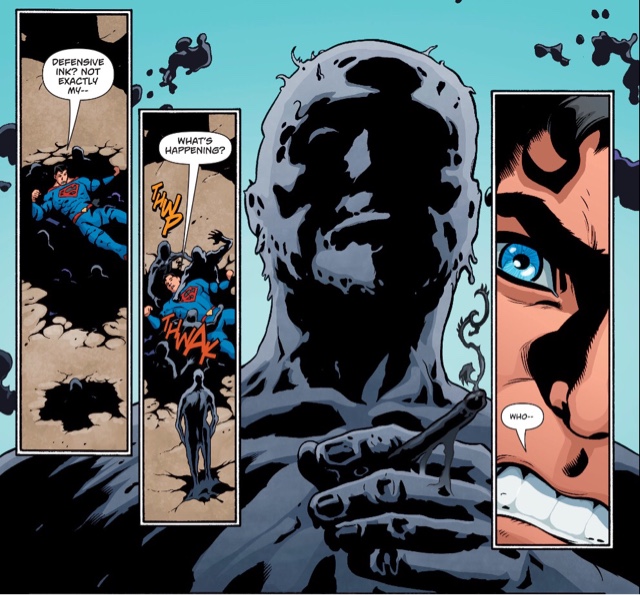 Along the way, Jon is asked to use lethal force on the octopus, and he doesn't hesitate... to say No. Jon is his father's son and won't kill if he can help it. Sadly, someone gets badly hurt as a result of this decision - and still there's no sign of Batman.
Superman again benches the boys while he heads for Dead Man's Swamp, having finally been told by Jon about his recent adventure there with Kathy. Speaking of whom, she's none too pleased when she finds Damian and Jon fighting. And it turns out she can stop them...
There's more to Kathy than meets the eye, it seems, adding another layer of mystery to a book choc-full of them. What's in Bessie's milk? Who is Cobb really? Has Batman been pasteurised?
The Caped Crusader isn't seen at all this time, but it's hard to miss him when there's so much going on. Patrick Gleason and Peter J Tomasi's script is expertly paced, with terrific character moment, and they provides tons of fun things for the former to draw in his other role as penciller. There's the cosmic calimari, of course, but there's also an opening dream sequence showing us what Jon wants most; the visit by the Cobbs, with the idyllic inset panel behind Branden; the ever suspicious Damian; Krypto, shadows providing the outline of a cape; and those extremely creepy ink men, especially the one animated in the form of Cobb's bad self. A trio of inkers - Mick Gray, Joe Prado and Ray McCarthy - complement Gleason's linework, while John Kalisz' colours are a delight; I love that he isn't afraid of brights, and extra points for remembering Damian should have a darker skin tone than Jon. 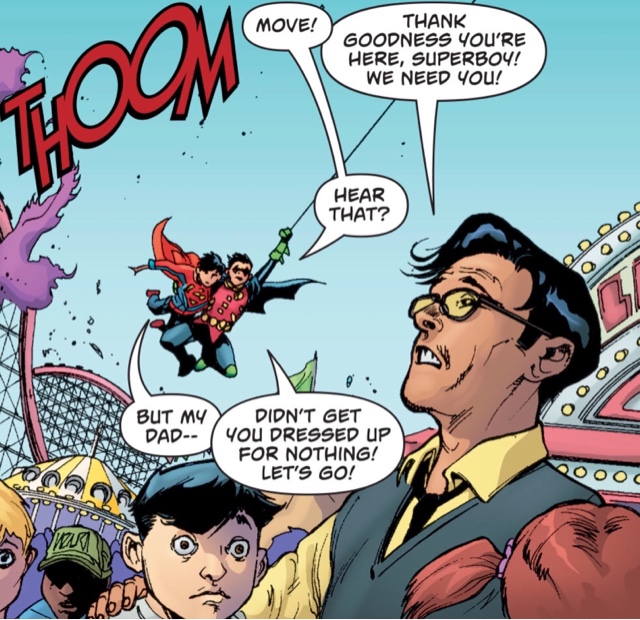 It's excellent to see Jon being crowned town hero, even if it is at the expense of his dad, and Damian adds spice to the country corn bread. My only quibble is that Lois gets even less to do than last time, vanishing from the book early on - she's one of the best reporters on the planet, no pun intended, and really should be investigating Cobb from another angle. 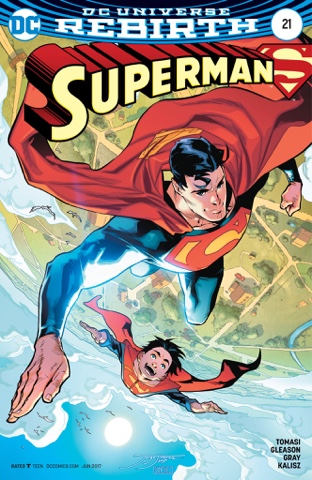 Gleason, Gray and Kalisz are the team behind the spectacular main cover, while Jorge Jimenez and Alejandro Sanchez - artists on the sister Super Sons title - provide the teasing variant, another beauty.
It's hard to choose a favourite moment from such an entertaining issue, but how about this? 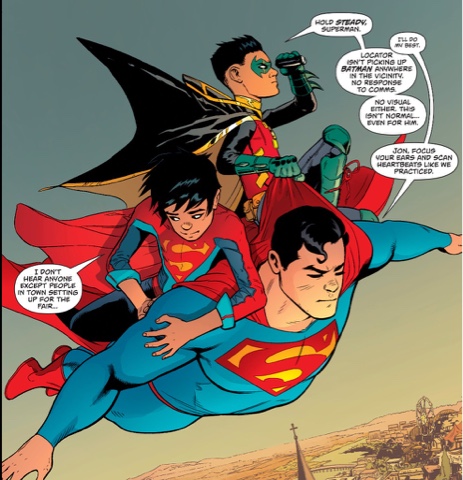