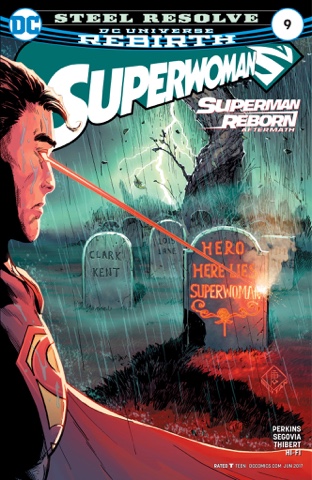 After Superman Reborn,  here's Lana Lang Reborn - the super-powers she recently gained were killing her but at the start of this issue, she's healthy once more. Spat out of the Kryptonian warsuit that was keeping her alive, covered in cosmic-amniotic fluid, she's a little dazed.

As she regains her composure, Superman's all-purpose robot, Kelex, has some news for Lana. 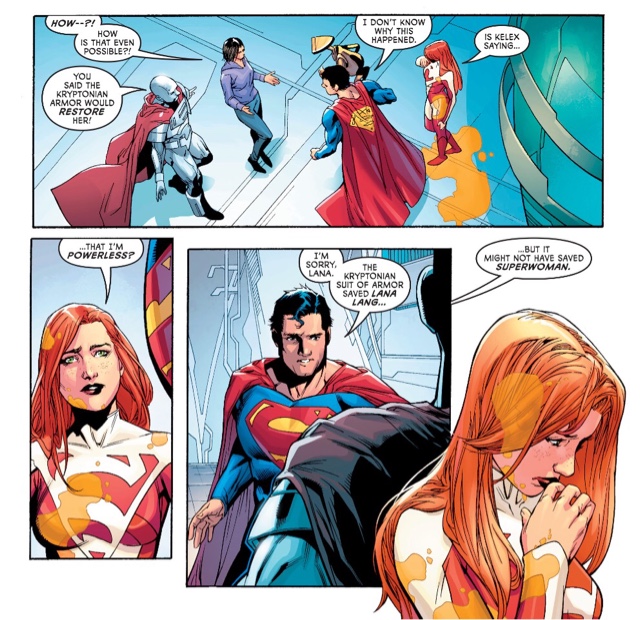 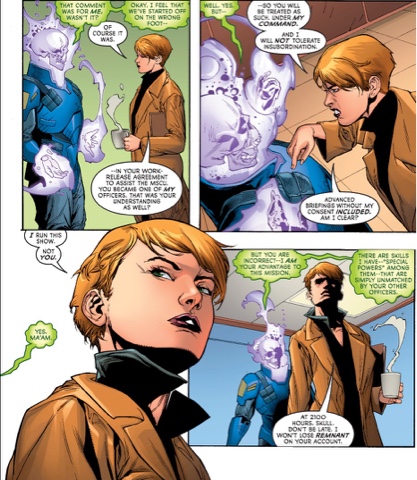 The former convict has been released into Maggie's hands after helping save Metropolis from the criminal convolutions of Lena Luthor. He's keen to help recapture escaped super-baddies, but overstepping his authority. He means well.
A few days later, Lana is back at the family farm in Smallville. She's miserable at the loss of her powers, tying to clear her head with some fresh air and hard work. Boyfriend John Henry Irons - the superhero known as Steel - is as supportive as you could wish for. 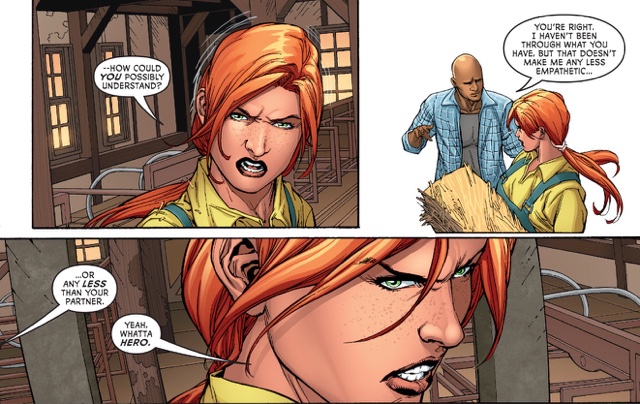 And Lana is a total cow.
Rather than pack his bags and leave Lana to wallow in her misdirected anger and pointless self-pity, John calls Superman in, hoping her oldest friend can somehow help. 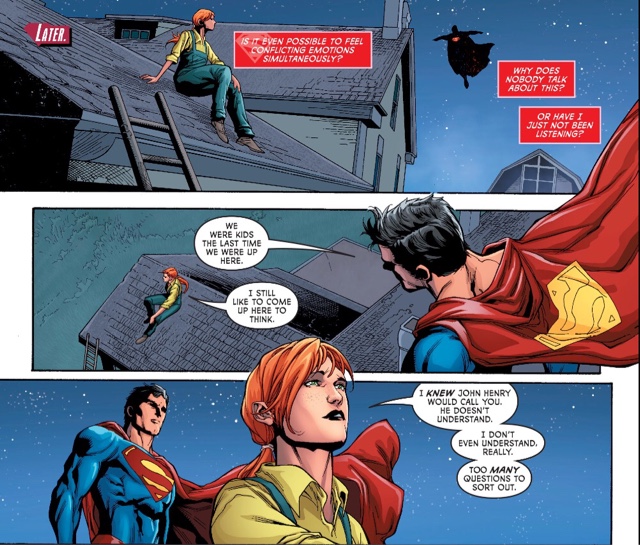 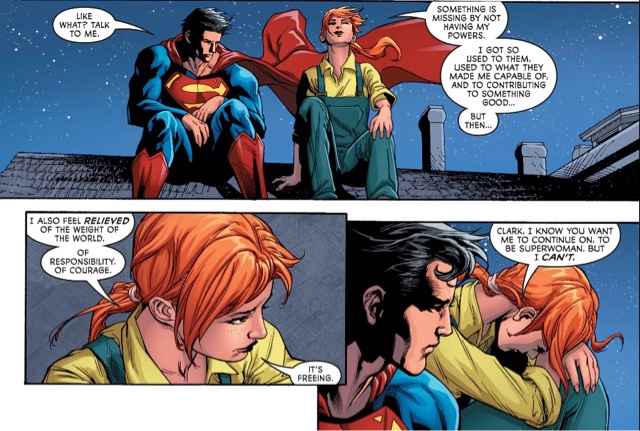 How she knows he wants her to be a hero, I have no idea. Anyway, Superman takes her back to Metropolis, just in time for an emergency. 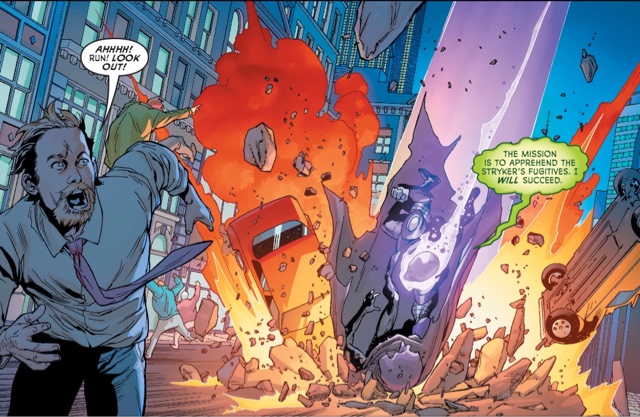 Minor league super-scumbag Remnant doesn't prove much of a threat to a Superman/Atomic Skull team-up, but he does provide Lana with a chance to be a hero without powers. The moment, and the discovery that her stint as Superwoman inspired people, cheers Lana up.

And not before time! She's spent issues whining and bitching, and she loses her powers and still isn't happy. I had hoped new writer K Perkins - who did great work on Supergirl - would ignore Phil Jimenez's characterisation of Lana as super-stressed to the extent of meanness. But here she is once more, snubbing Lois's phone calls, rejecting the supper Natasha's sweated over in a bid to make her feel better and yelling at John Henry.
That's Perkins being professional, respecting the previous storyline. It's commendable... but is it the best idea? Lana became mostly unlikeable throughout this book's too-long opening story, and the sooner she gets back to the spunky, fun character she was a couple of years back, in Action Comics, the better. The Superman Reborn universal reset would have allowed that easily, the whole opening arc could have been wiped out and Lana given powers in some new manner... heck, how many different ways has Guy Gardner found to be a hero?
Mind, I'd rather the whole Lana-as-Superwoman idea were dropped - like Lois, Lana has never needed powers to be awesome, and her stint in this book has actually diminished her. For the first time in my life, I don't like the character. She needs to go back to supporting status, be given time out of the spotlight to find herself again. No more powers. Forget the comic book farm that somehow continues with no workers and only the occasional visit by the owner. Use that science editor job Phil J gave Lana and get her back to the Metropolis media world, where she's worked so well in the past.
I'm not saying cancel this book. This is the best issue of Superwoman in many months. With a less-sprawling story and artwork as good as anything we've seen previously, I definitely enjoyed it. But how about a change of focus? 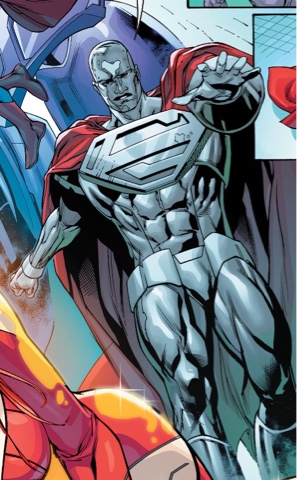 Keep Lana as a featured player, but bump up the roles of Steel, Natasha, teenage magician Traci 13 and Maggie. Bring in the Daily Planet staff and bar owner Bibbo and his daughter. Reintroduce Jose Delgado and Rose & the Thorn to the Superman mythos. Then change the title of the comic to World of Metropolis and show us what living in this City of Tomorrow actually means. Phil J was going this way already, but he used too many characters at once; rotating the core cast every few issues would give everyone, and their stories, room to breathe while building a bigger, brighter picture.
And for goodness sake, keep Perkins and artists Stephen Segovia and Art Thibert. I may be unsure of the direction, but I know craft and style when I see it. Perkins shows she can handle the book's cast, and I already know she can pace a story for maximum drama, hitting the action and emotional beats with aplomb. She also gives us the best street name ever.

Inker Thibert contributed to the Superman books for years in the Nineties, and he never fails to bring a powerful vibe, while Segovia's smart compositions and strong character work make Metropolis sizzle. A two-page sequence of Superman flying Lana over the concrete canyons is thrilling, while Lana and Clark on the farmhouse roof has a quiet poetry. Every page, coloured by HI-Fi, is a treat. Segovia and Thibert's Steel is especially strong, I hope they get to draw him in action soon. 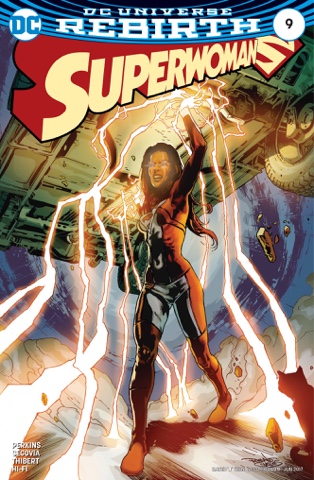 Billy Tan's regular cover is amusingly gloomy, while Renato Guedes - another Supergirl veteran - produces an eyecatching variant... the face doesn't look like Lana, but it's great to see him back at DC, and points for the cat.
Superwoman continuing beyond Phil Jimenez' tenure is one of life's surprises. I'm ready for Perkins and Segovia to give me a few more.
Art Thibert Billy Tan Hi-Fi K Perkins Renato Guedes Stephen Segovia Superwoman #9 review