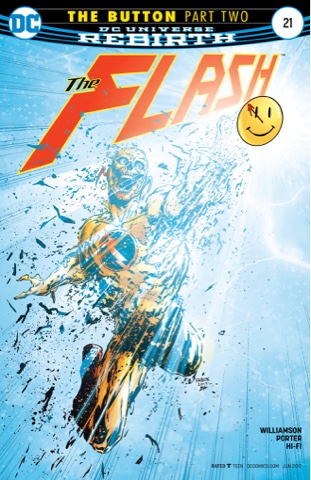 The Reverse-Flash, Professor Zoom, is dead. Batman, savagely beaten by him, is recovering. And the Fastest CSI Alive is on the case. 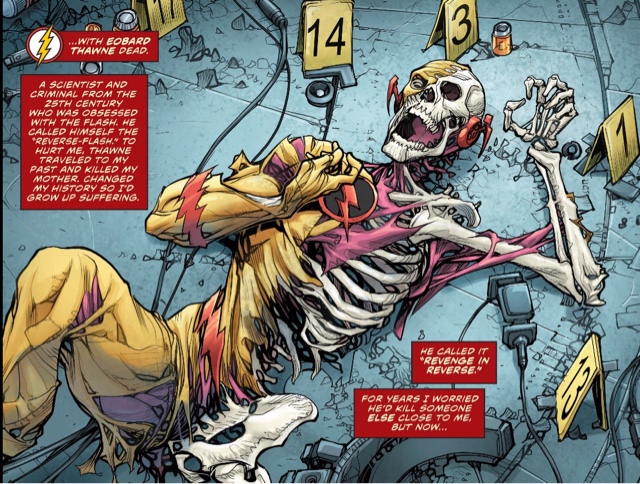 Finding his own energy signature all over Zoom's corpse, Barry fears that perhaps he's Zoom's killer, at some point yet to come.
In Bruce Wayne's bedroom, the heroes discuss Zoom's claim, before he dropped dead in front of Batman, that he'd seen God. Batman admits to seeing something disturbing himself. 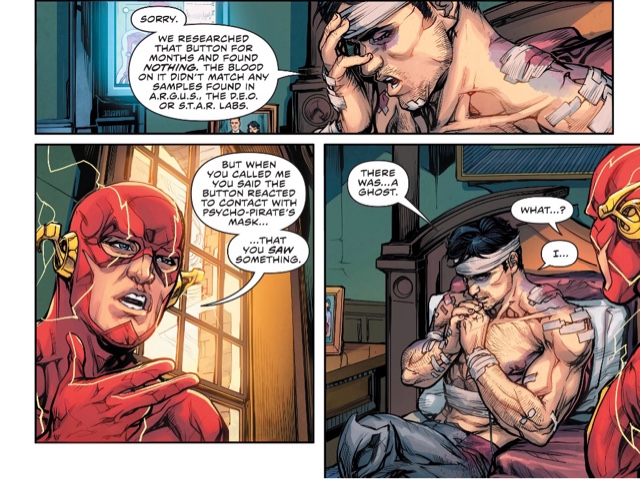 Barry admits to a vision of his own. 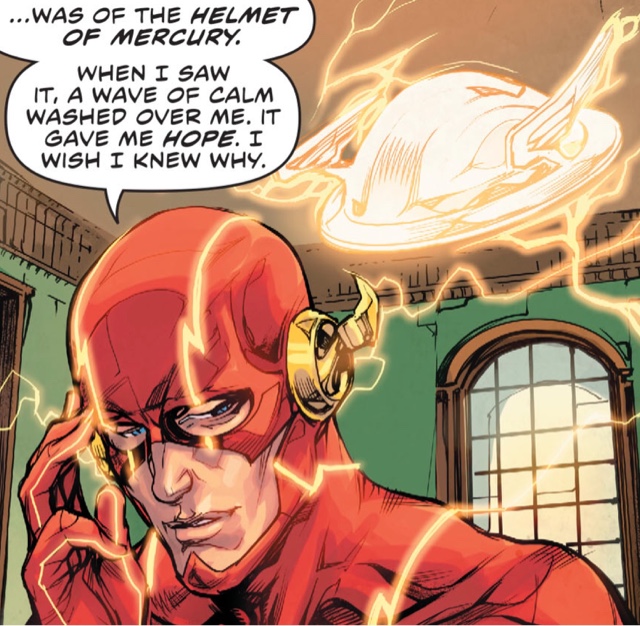 After Batman assures Barry that the reality changes post Flashpoint weren't his fault, he leaves Batman to recover, not telling him he plans to investigate the circumstances of Zoom's death via time travel. This means a trip to the Justice League's most interesting room, to collect his Cosmic Treadmill. Soon, Barry is heading into the past... with Batman at his side; of course the Caped Crusader would guess his intent, and insist on accompanying him.
And deep in the timestream, they see something that redefines 'enigmatic'. 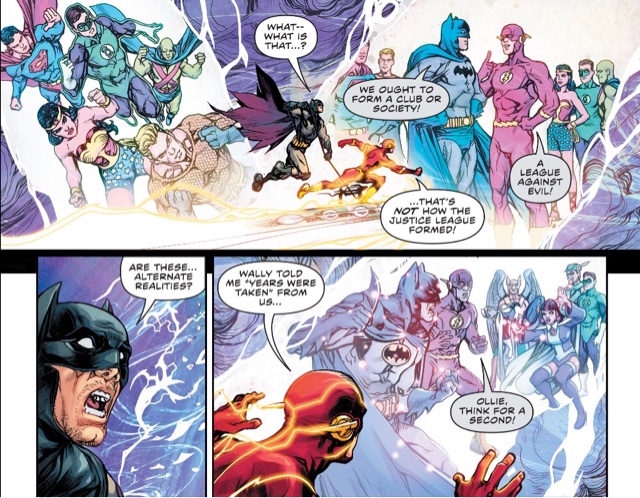 And then they meet... well, that would be telling, but let's just say 'long-lost relative'.
Oh, and there's one more sequence this time that will undoubtedly prove significant. The first page of the story. 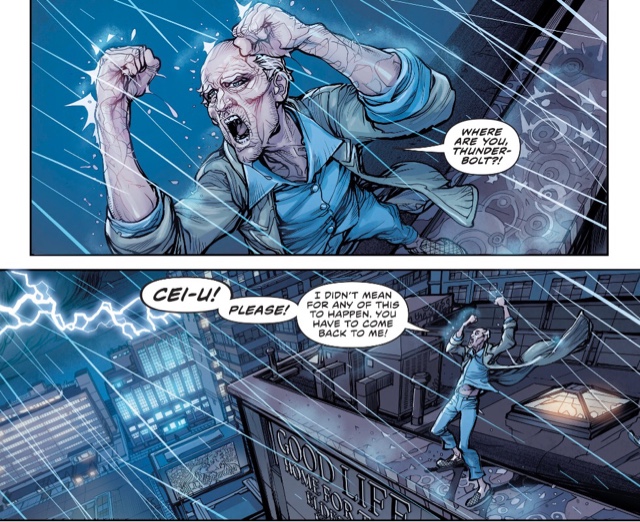 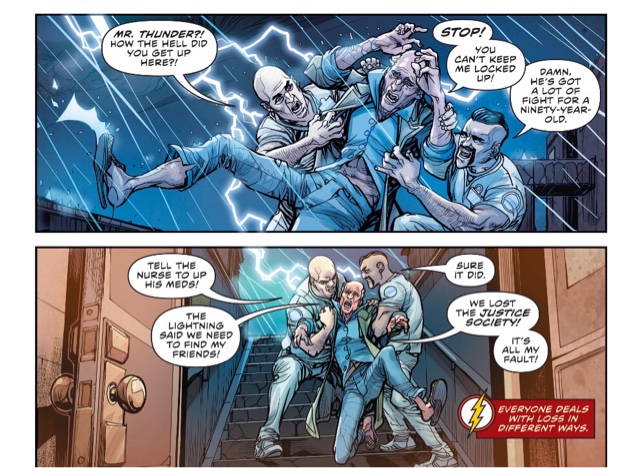 Yes, it's Johnny Thunder, the Golden Age hero who controlled one of the most powerful beings in creation. Also, a member in good standing of the Justice Society of America, whom Barry seems to have forgotten existed, given he doesn't recognise original Flash Jay Garrick's helmet.
Mind, look at those suits in the background of the Watchtower sequence. 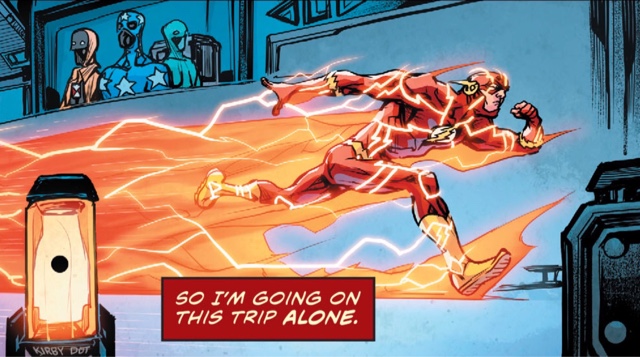 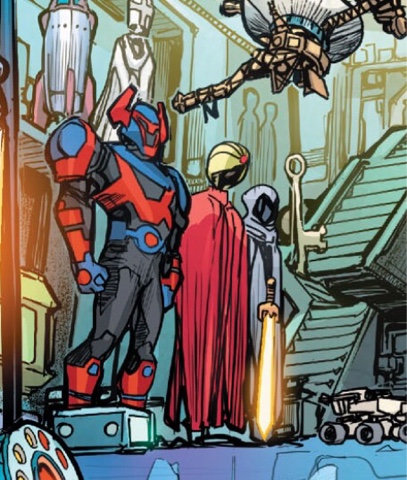 Star-Spangled Kid. Hourman. Sargon. The Spectre (maybe). Deliberate hints that reality is slyly bringing back the world's first super-team under Barry's nose, or just a few Easter eggs too many (that doesn't go for the tiny detail in the corner - genius)? 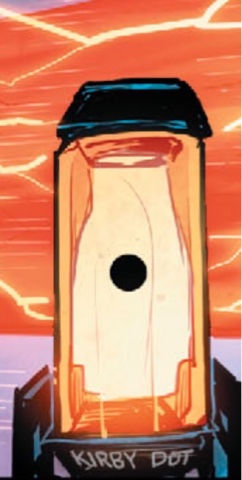 A more serious puzzle is that Barry would think, for one second, that this is the last he'll see of Zoom, as he clearly does. This was a lunatic time traveller. Even if he's reached his endpoint, an earlier version could pop up at any time - look at all the occasions Kang has bedevilled the Avengers from different points in his personal timeline (he's doing it right now in Mark Waid's run, fair drove me off the book it did - well, along with the hazy artwork).
I did enjoy seeing Bruce, despite knowing his friend is a detective by profession, patronise Barry. 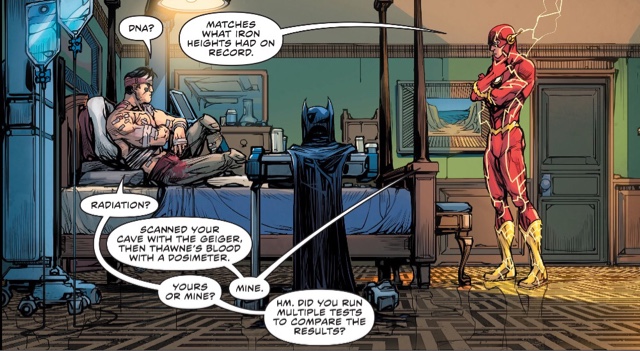 And is anyone even vaguely surprised that Bruce Wayne's bed wouldn't look out of place in your average hospital ward?
What does the Silver Age JLA vision mean? Hopefully that the majority of the team's history is being reinserted into continuity.
Dripping with history and hints, this continuity porn bonanza is just my cup of tea. I realise the DC Rebirth mystery which began last May is due to continue for another year or so, but if DC keeps putting out issues like this, I won't be bored in the meantime. Who knows, there may be genuine clues that will help us work out just what Dr Manhattan (presumably) has been up to.
Writer Joshua Williamson picks up the baton from Tom King, who wrote part 1 of The Button in last week's Batman #21, and runs with it, seemingly having enormous fun keeping the plates spinning and adding a few more. The easy friendship between Barry and Bruce is heartening after the coldness of Batman in much of the New 52 Justice League stories.
As for the art, it's Howard Porter back drawing a Justice League story. And it's not just the really rather good Howard Porter who drew the team back in the Nineties, it's the Porter of 2017, a craftsman and stylist who is never content to rest on his considerable laurels. The storytelling choices, the characterisation of the heroes... it's superb from start to finish. With the likes of the fascinating opening spread and the eerie moment with Wally, it's hard to name my favourite visual, but I think it's this. 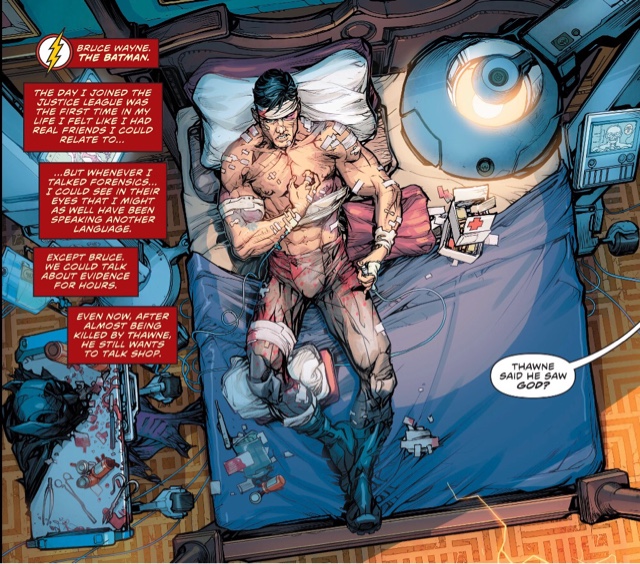 Bruce Wayne, beaten up but not beaten down. Pondering the mind-blowing evidence, but not panicking. The calm centre of a cosmic storm.
The Hi-Fi colourist earns their keep, filling the lines with well-chosen hues, amping up the drama, while the work of letterer Steve Wands is as sharp as ever - look at the attractive placement of the conversational balloons in that Batman bedroom scene above.
The issue is topped off by three fine covers. There's a time barrier variant from Porter with colourists Hi-Fi, an international don't-show-the-smiley-button image from Mikel Janín and an electrifying lenticular cover from Jason Fabok and Brad Anderson. DC, you are spoiling us. 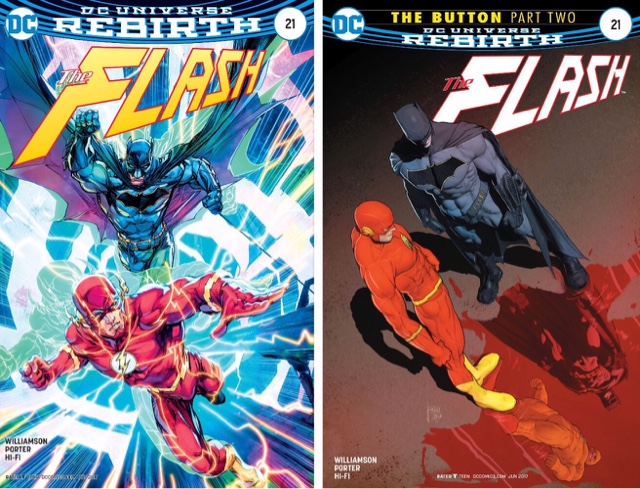 I doubt anyone would need to have read the first part of The Button to get plenty of enjoyment from this issue, it's a rich romp through DC history as two of the company's top detectives strive to solve the biggest mystery of all. Now, if Flash and Batman would only bring in the Elongated Man - DC's actual best gumshoe - they might just crack it.
**** 4/5
Brad Anderson Hi-Fi Howard Porter Jason Fabok Joshua Williamson Mikel Janín The Flash #21 review