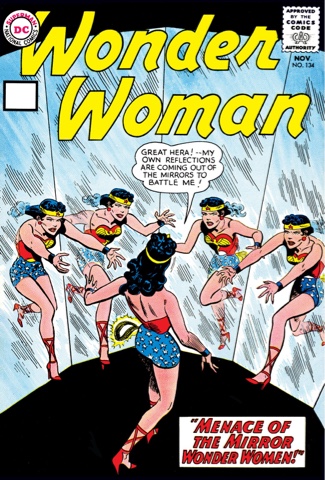 Wonder Woman is taking a good, hard look at herself when she gets a shock. 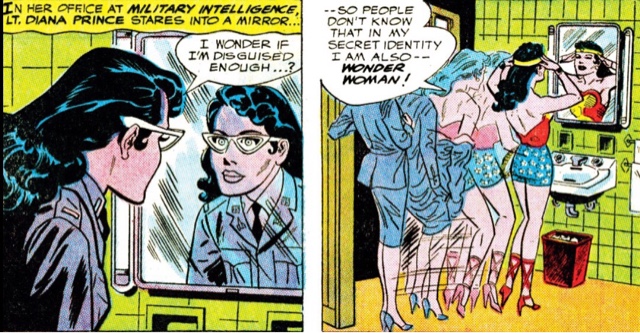 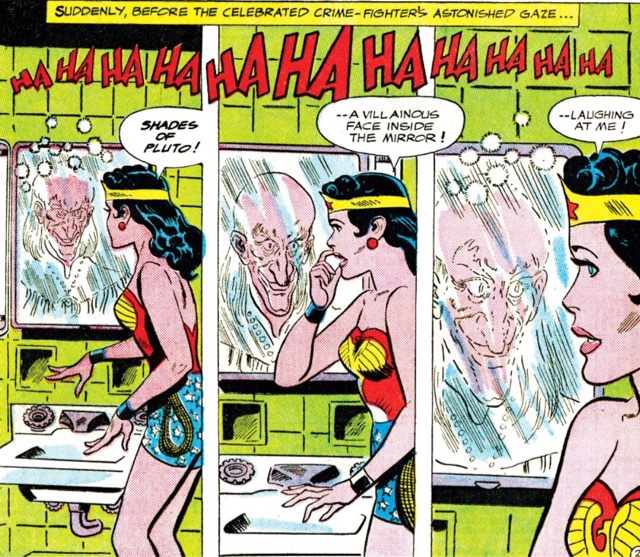 The face vanishes and Diana tells herself she imagined it, besides, she has a date with hunky Steve Trevor. He's come to take her to an amusement park, which he reckons will relax the busy superheroine. Why she chooses to come out of Diana Prince's office when she's just been worrying about people seeing through her disguise is beyond me - Steve, obviously, is too dim/loved up to notice. The fact they're perfect for one another is hinted at by the fact both are going on a date in uniform, the pathetic workaholics.
Diana doesn't mention the man in the mirror, neither does she admit seeing him again on a double glazing truck. Distraction comes in the form of gunfire. Wonder Woman doesn't believe it, it has to be her overactive imagination. 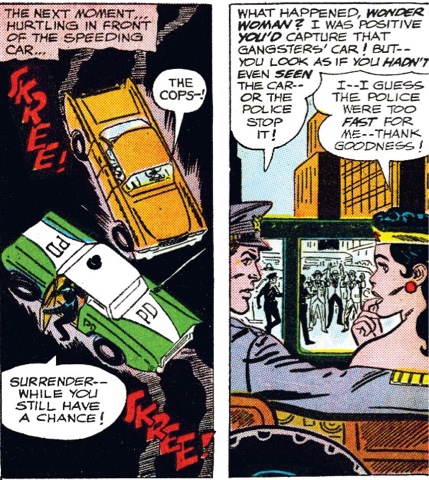 Nope, it's the real thing, but happily, police are on the scene. As with anything else that ever happens, Steve takes this as a sign. 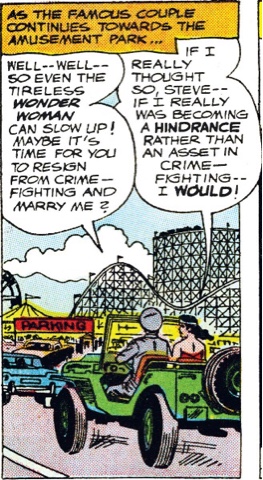 Nice try, flyboy.
At the showground, she's unnerved yet again as the face stares at her from a photo booth. But good old Steve provides the distraction she needs. 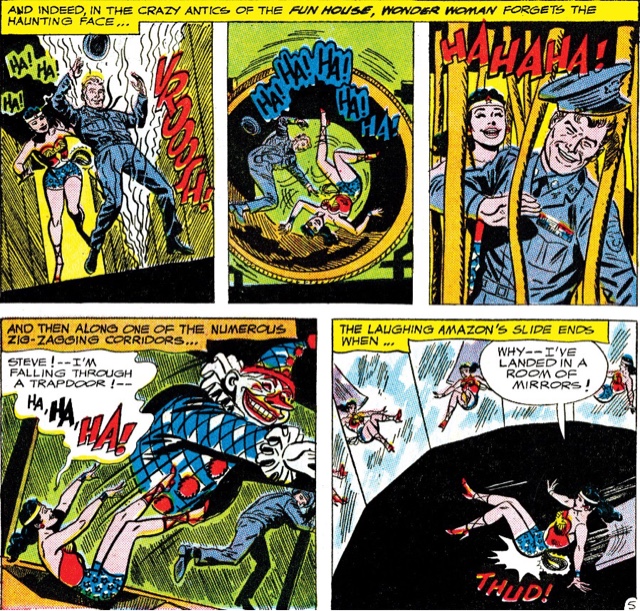 In the hall of mirrors, though, the fun fades.
Inside a strange mirror world, Diana meets the being who's been taunting her. 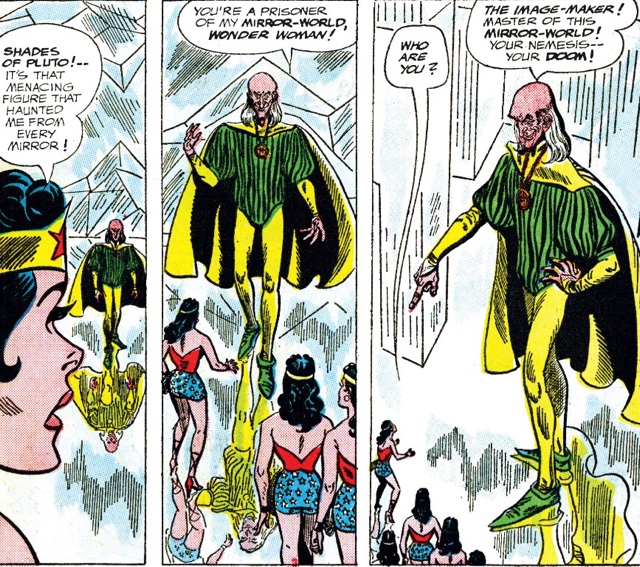 Finally, Diana snaps out of her funk and attacks the giant, before he explains his scheme. 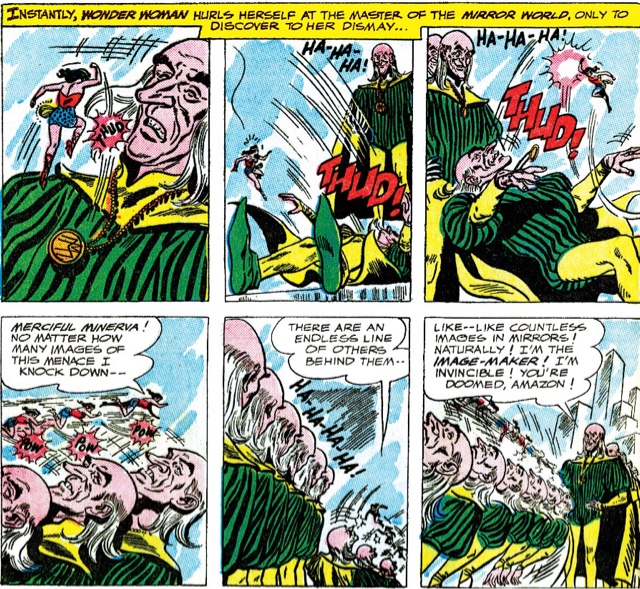 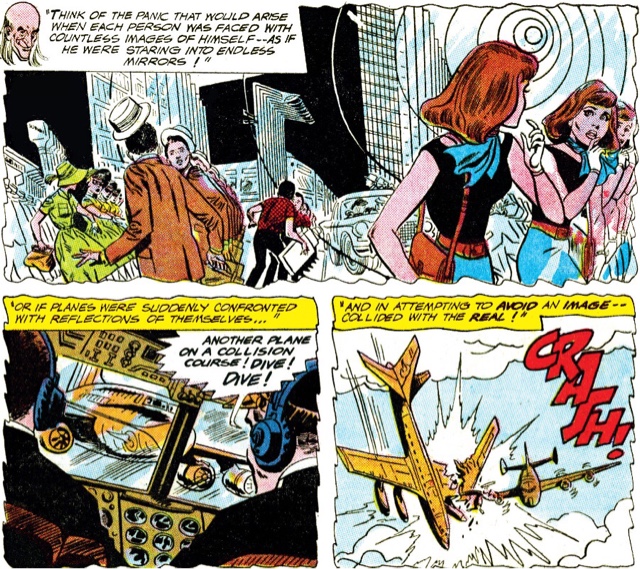 Unperturbed, Diana attacks once more and again comes face to face with herself. Or rather, selves. 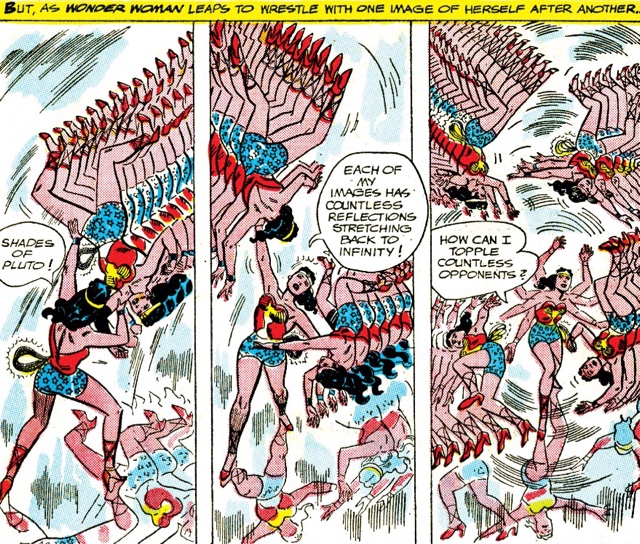 There are just too many, she can't beat them physically. But the Image Maker seems to like playing games, and gives the Amazing Amazon one last chance. If she can outrace her reflections, he'll abandon his plot. 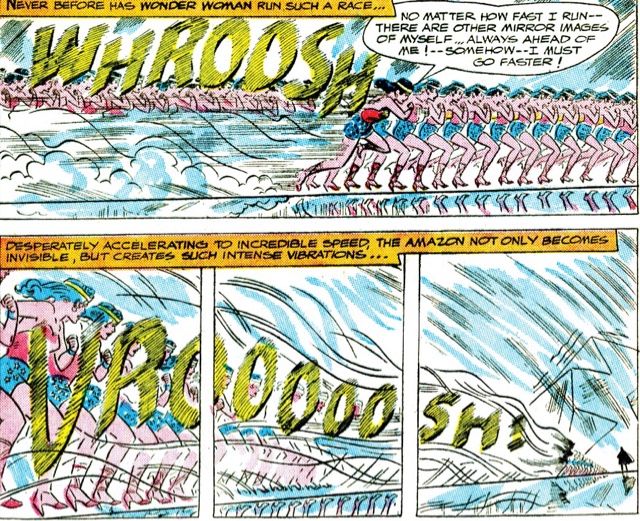 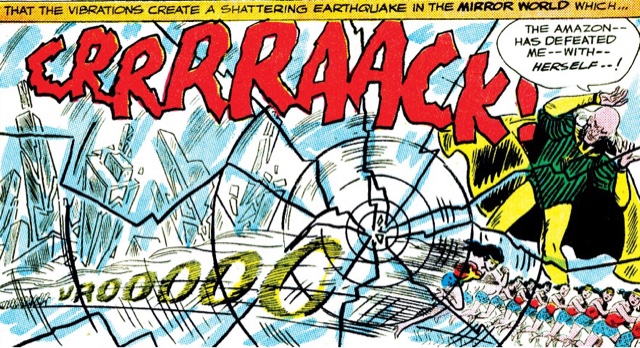 More by accident than design, she wins the day... but it is her unmatched speed that does it. Soon, Diana is back with Steve, who's oblivious to the travails his best girl has gone through.

I just love Steve's gormless expression in that last panel. Actually, I love every page as drawn by Ross Andru and Mike Esposito. They defined Wonder Woman in the early Silver Age with their art, the figures naturalistic but the tone wonderfully quirky. And the way they capture everyday folk - including that young woman who's rather Mary Tyler Moore - is a visual time capsule. What's more, their action sequences were up there with any of their contemporaries. Blow up pretty much any panel and you have Pop Art. 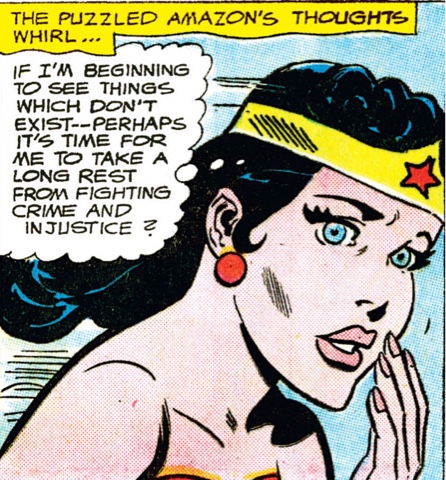 There's a real screwball quality to the look of the book which, sadly, isn't present in Robert Kanigher's script. Kanigher was an amazing writer, whose contributions to comics include the co-creation of Sgt Rock, the Silver Age Flash and The Metal Men (again with Andru and Esposito).
But Wonder Woman? By the time this issue appeared he'd been on the book a few years and thrown out Marston's strong, fun-loving heroine, replacing her with a character who, while a top superheroine, was the wettest of women. Diana spent her time doubting herself, crying over Steve, fearing that as a super heroine she was too unfeminine to ever be a bride.
We still get big, daft superhero moments - the fight with the horde of duplicate Dianas is an artistic tour de force - but it's such a small part of the story, Kanigher seems far more interested in set-up and self doubt.
And yet... this is the first issue of Wonder Woman I ever read as a boy, passed on to me by a neighbour whose brother bought it years earlier, and it's fair to say I turned into a Diana fan. It probably helped that as I was reading these old issues, I was enjoying the JLA issues that were appearing around the same time, in which Diana was a pure superheroine, and early Bronze Age Groovy Di Prince, in which she was a determined adventurer. It was a few years before I discovered the Golden Age Wonder Woman, the full-blooded heroine who was more likely to wrestle a man than cry over him, so I didn't know how far she'd fallen by her 134th issue. 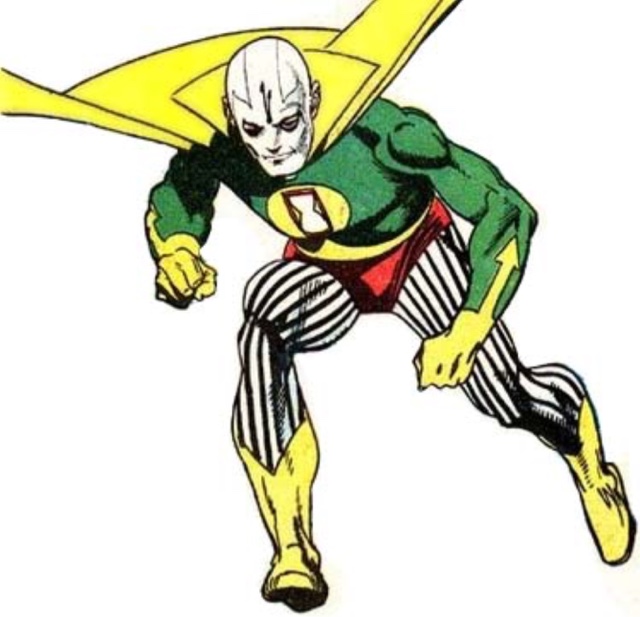 I enjoyed the Image Maker. I was a kid, so the sheer lunacy was appealing, and I like the costume, which recalls Atom villain Chronos, a big favourite of mine. As an adult, I might wonder if the Image Maker was somehow reflecting Diana's self-doubt, inadvertently helping her conquer it, but sharp as Kanigher was - I once spent an afternoon with him and 'sharp' doesn't begin to cover it - I don't think psychological mirroring was his game here. He wanted to entertain, and entertain he did.
Kanigher, Andru and Esposito pull off the same trick in the issue's second story, which stars Wonder Girl. Not Donna Troy - this was before Bob Haney accidentally made Wonder Girl a separate character in Teen Titans - but Diana herself as a teenager. 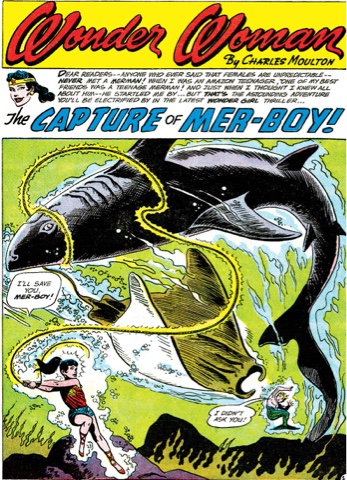 Teenage crushes are the pivot around which The Capture of Mer-Boy spins, but there's more to this than young romance. Where Menace of the Mirror Wonder Woman kicks off with a splash that does nothing but duplicate the cover, this tale is advertised with a sensational feat. And then the story proper begins… 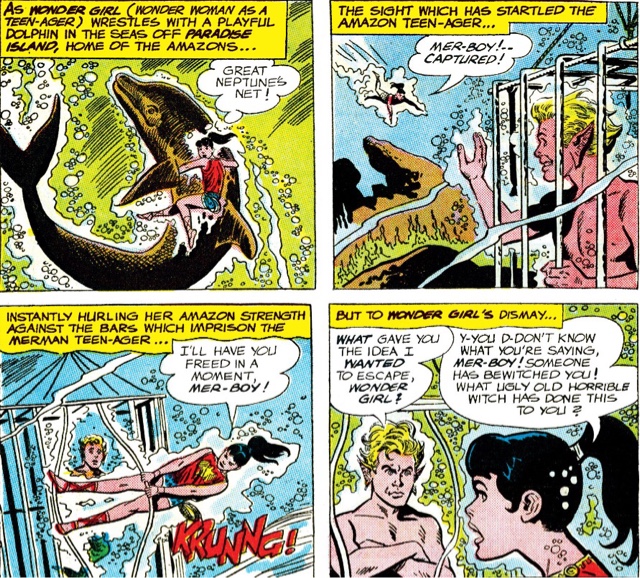 That's some gal. But why does Mer-Boy seem less than thrilled at being saved? Is he under a spell? Sort of.

Nothing for Diana to do but take her sobbing self home to Mom. Wonder Queen has wise words.

We flash back to the last time Wonder Girl encountered her finny friend.

And yes, it seems daft that she's getting ready for life as a heroine, but Kanigher is careful to have her say, later, that she's preparing for the day she may become  'a Wonder Woman', not 'the Wonder Woman'. She doesn't know what's in store.
So what happened to make Mer-Boy so desperate for affection he'd rather be caged than hang out with Diana? 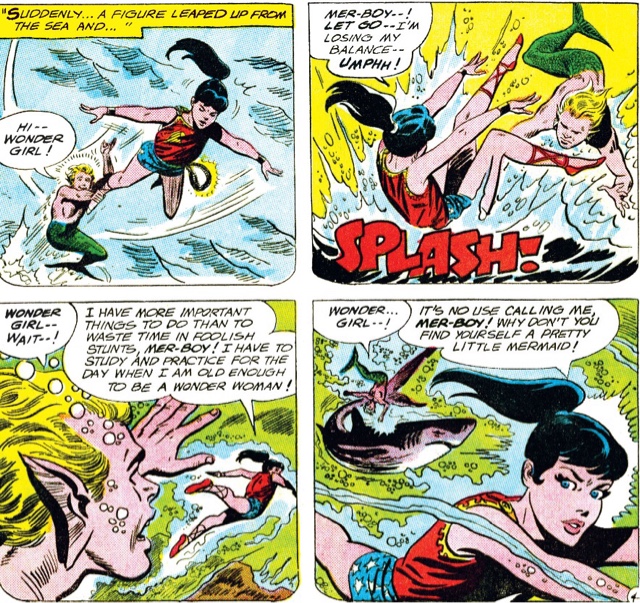 What else but a misunderstanding? Diana rescues her sometime suitor and is terrified when he seems to be injured. 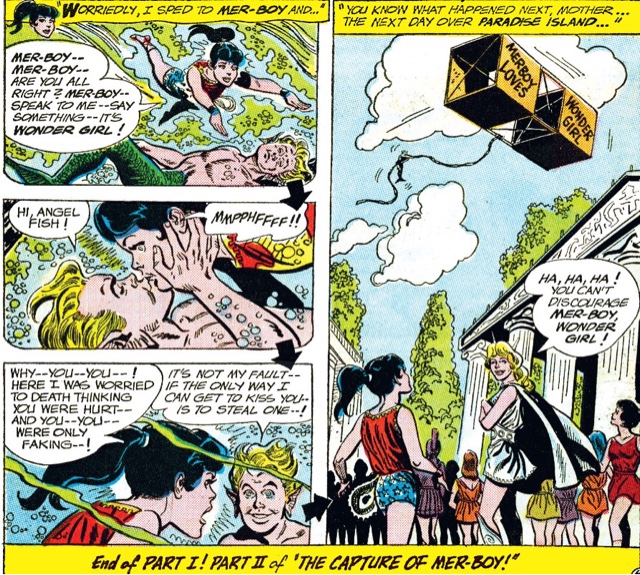 The wee sneak. Queen Hippolyta - who as a kid I thought was something to do with the Statue of Liberty - thinks his behaviour is cute.

Mer-Boy's kite cut-ups risk ending in tragedy when his giant vessel fails. He could die. Worse, as a man he could, apparently, short circuit all the Amazon's physical gifts. Somehow I don't think this kid is going to 'set foot' anywhere, but the scare does give Diana a chance to show what she can do. 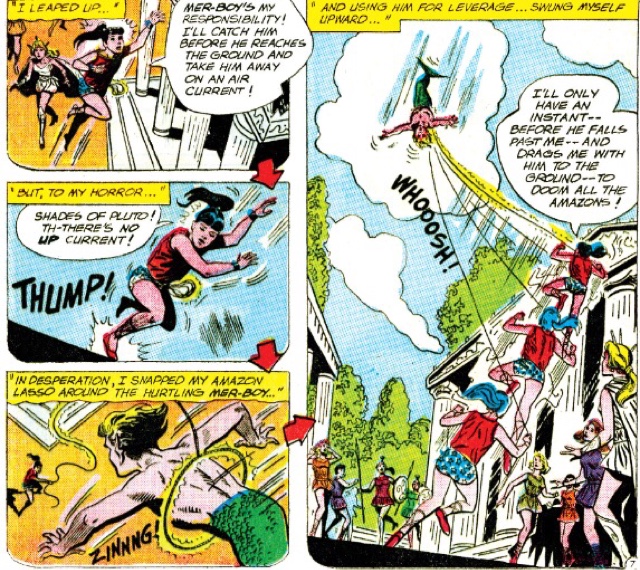 Awesome.
Realising that she never gave Mer-Boy a chance to explain why he was so upset with her, Wonder Girl flies off to catch up with the teen explorer's boat. The minx mistakes the young Amazon for a big bird and, obviously, fires a net into the air to snare her. No creature must go uncaged! Wonder Girl, though, can't be hampered by a mere net.

Mer-Boy is still acting rather wet. A dejected Diana is about to give up on Mer-Boy once and for all, when danger strikes. 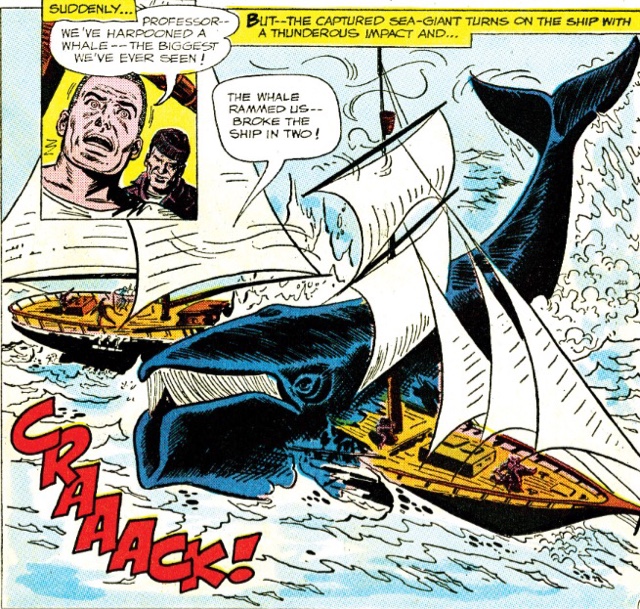 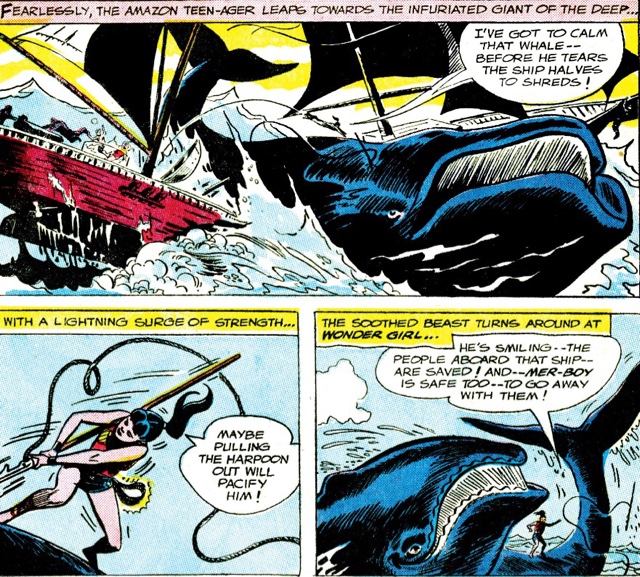 The crisis is soon over but Wonder Girl has bashed her bonce!

Aw, Mer-Boy still loves her. In a shallow, adolescent way.

Isn't it sweet that he calls her 'Angel-Fish', the way Steve Trevor will one day call Diana 'Angel? I loved this story, which really shows Diana to be a teenage powerhouse. Sure, there's that old business about the Amazons losing their powers should a stinky man step on Paradise Island, but we also see that Wonder Girl trains to be able to glide on air currents... so much more impressive than the modern Diana, who flies just because she can. I also appreciate that rather than just bash the out-of-control whale, Wonder Girl goes the soothing route - she won't hurt a living thing if she can help it. And while there are a lot of soppy emotions in this story, we're dealing with teenagers here, and passions - imaginary and otherwise - run high.
Once again, Andru and Esposito do a bang-up job on the art, whether it's the joyous Queen Hippolyta, the unnamed blonde hussy, the daffy Mer-boy or the fearsome sea creatures. 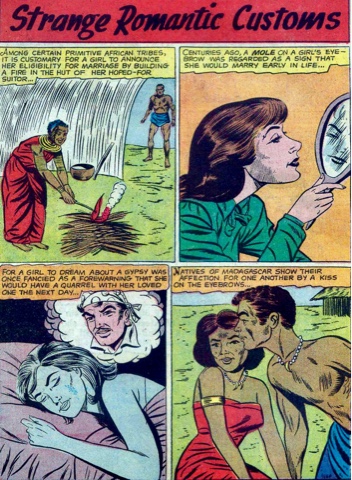 With two ridiculous romance pages that leave no doubt as to whom DC was pitching this book at, a feature on birds with awful map rendering and a letter column that suggests a fun team-up we never saw, this is a terrific example of the Wonder Woman I first knew. It's available on ComiXology and I heartily recommend it. 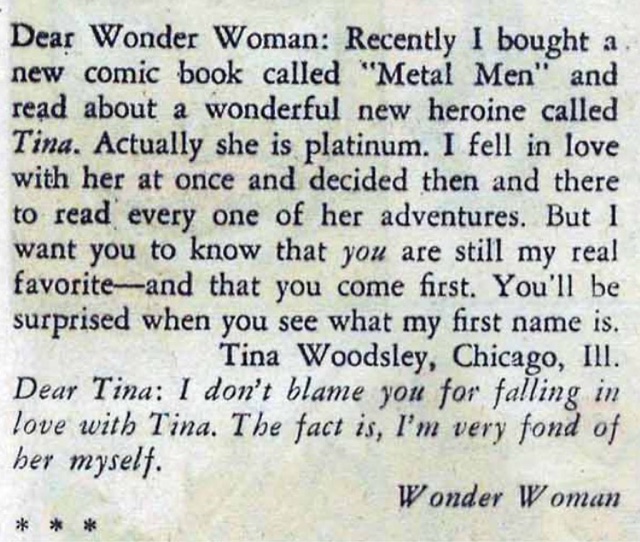