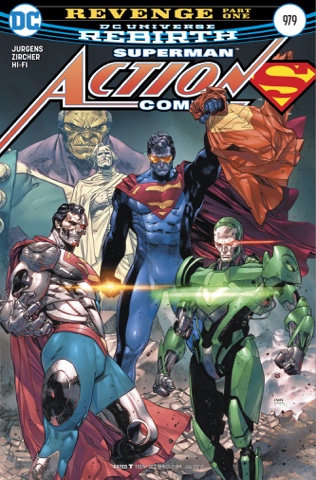 Clark and Lois are in the market for a property. Now they're both back at the Daily Planet a long commute to Hamilton makes no sense, says Lois. So they're looking at a duplex - top-floor, so Superman can better fly off on business - and hoping son Jon won't be too upset about moving to the big city after spending his whole life as a country boy. 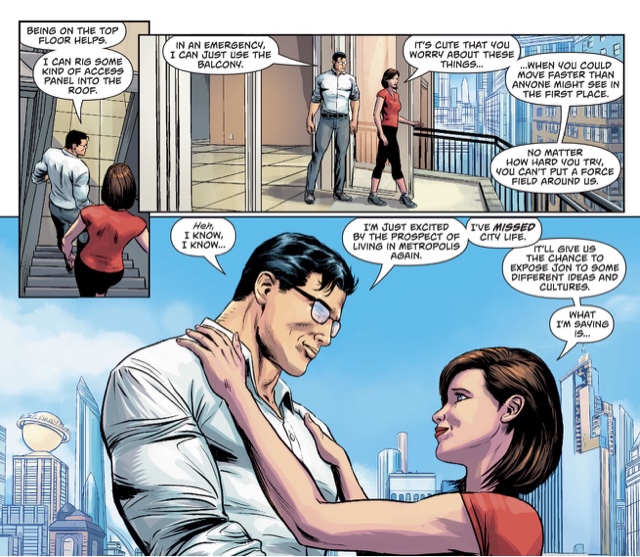 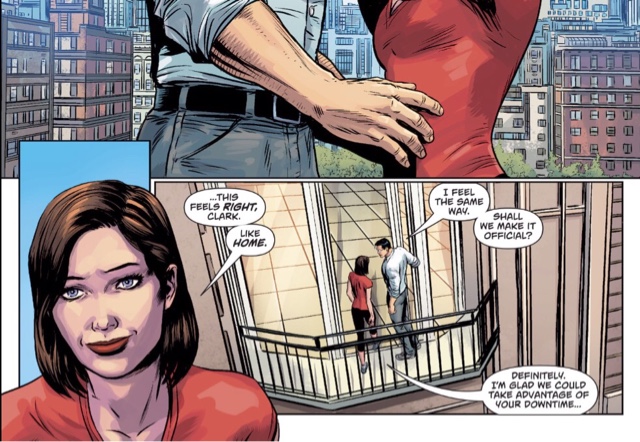 That's that settled. In the Himalayas, one of the bigger parts of Superman's existing property portfolio lies in ruins, easy prey to scavengers. 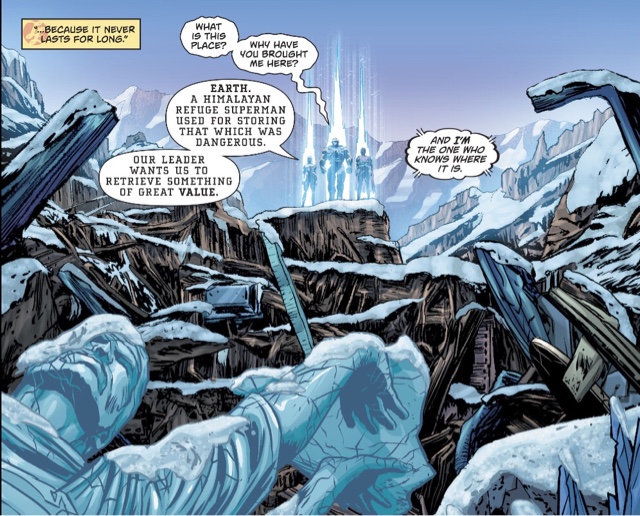 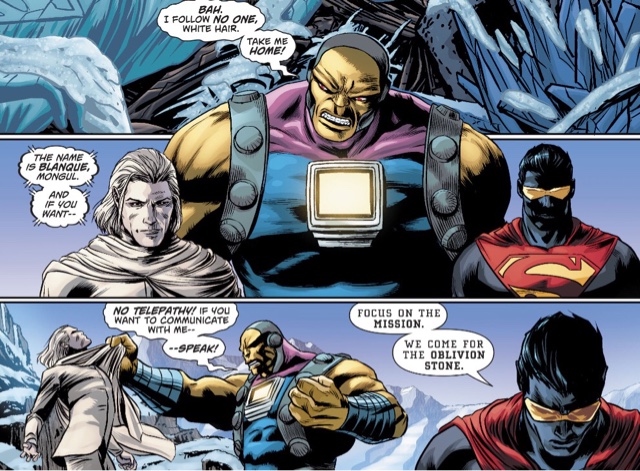 Even a wrecked Fortress of Solitude isn't going to escape Superman's notice for long, so he hotfoots it to the site, where he finds even more devastation than he feared.
On the Moon, the new Superman Revenge Squad isn't exactly a criminal glee club. Mongul, used to ruling rather than following, is unwilling to accept being given orders by Hank Henshaw. It's like he's forgotten who - or rather, what - Henshaw once was... 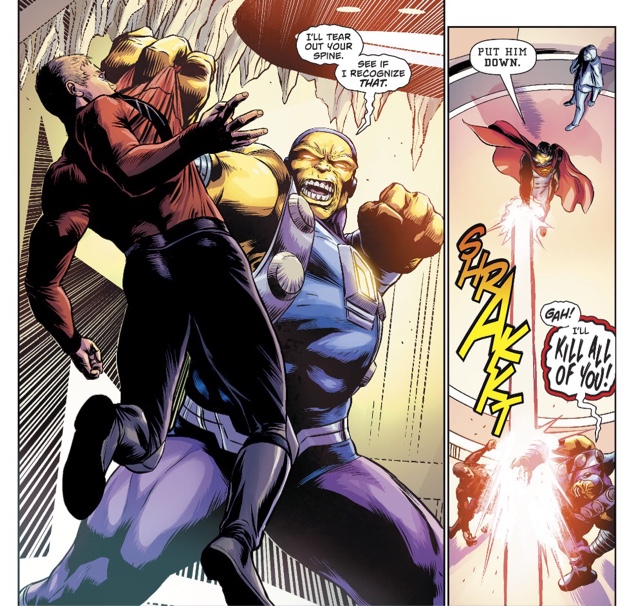 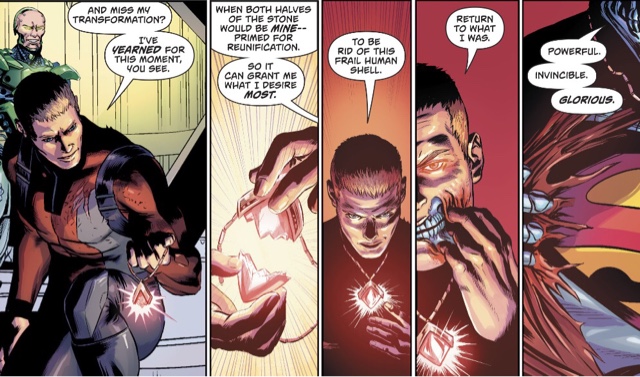 This is a terrific issue from the primary Action Comics creative team of writer Dan Jurgens and artist Patch Zircher. They give us the everyday stuff I love - I'm delighted the Kents are moving to Metropolis, so much so that I won't whinge about Lois's 'long commute' not making a great deal of sense when her husband can fly at super speed. I can't see Jon being too upset about leaving Hamilton given what's happening over in the Superman series, which presumably occurs after this issue; either that or Jurgens doesn't wish to distract from this story, which is fair enough.
It's gratifying to see that having already brought evil mentalist Blanque from his Lois and Clark mini-series back into play, Jurgens now addresses the Oblivion Stone and mysterious Fortress residents Dratania and Klon, I hope we hear their stories one day. It seems they're modern Mon-Els - unable to survive on Earth, kept waiting for an ever- distracted Superman to free them from an unpleasant prison. And I'm very glad to see the question of Superman's detaining of Blanque addressed.
As part of Mongul's recruitment to the new Revenge Squad, we see him woken from the dream prison he's been in of late - after a glimpse at his predictably un-sweet dreams - think 'Mongul smash', especially as Jurgens has him sounding a tad Hulky, which makes me smile.
It's a splashy beginning but anyone familiar with Mongul will instantly realise this isn't 'real life' - not that I mind, as Zircher and colourists Hi-Fi find a perverse beauty in brutality. The shot of a sleeping Mongul is just dazzling, typical of the art this issue. 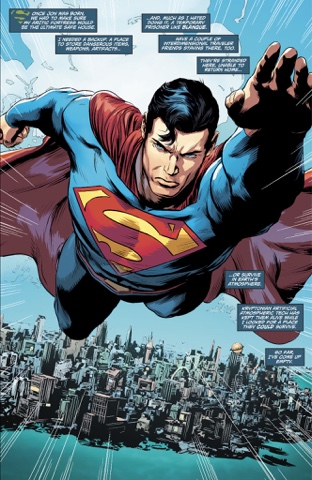 My favourite bit of business is the splash panel of Superman flying, a typical Metropolis cityscape behind him - talk about 'suitable for framing'. It's also splendid to see a montage of our hero's flight to the Fortress, over the ocean and through the desert... we really don't see enough of This Kind of Thing.
The return of the original Cyborg-Superman, presumably as a result of the Superman Reborn storyline, means we get back a classic villain while Supergirl, presumably again, sees her father disconnected from the concept.
Letterer Rob Leigh's work is as sharp as ever, his Eradicator font being particularly pleasing. I like that of late when Superman's Doomsday problem has come up it's been about the day he 'died' rather than died, no quotes. It always bugged me that DC would say Superman died when he patently didn't, he was beaten to the point at which his body shut down, allowing him to be revived by Fortress technology. 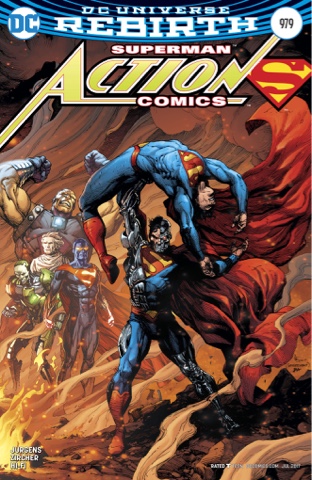 Both the regular and variant covers focus on the Revenge Squad and it's hard to choose between them. Illustrator Clay Mann and colourist Tomeu Morey win by a whisker with their nicely balanced, beautifully delineated group shot, but Gary Frank and Brad Anderson's vision has an excellent flailing Superman.
This is the first part of Revenge, a storyline crossing over with Suicide Squad, where the inevitable General Zod has been of late. Given how scary that version of the character is, I'm intrigued to see how he'll do against a Superman who's as powerful as he's ever been, and a little more focused. Let's hope that chapter's as enjoyable as this lead-in.
Revenge was also the title of a song in the fun Sixties musical It's a Bird, It's a Plane, It's Superman. If Henshaw and company burst into song any time soon, I shall throw money.
**** / 9/10
Action Comics #979 review Brad Anderson Clay Mann. Tomeu Morey Dan Jurgens Gary Frank Hi-Fi Patch Zircher Rob Leigh