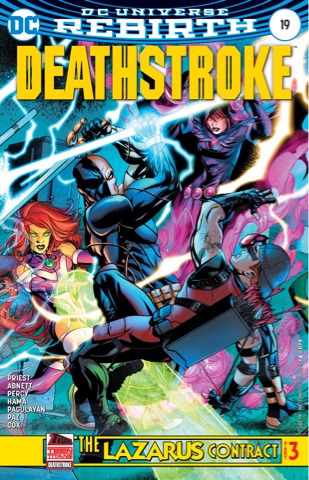 Deathstroke has become the Fastest Killer Alive and Wally West is on his trail. He's also the chattiest, explaining to Wally, aka The Flash, the deal he made with Dick Grayson several years ago, one centred on his daughter Rose. 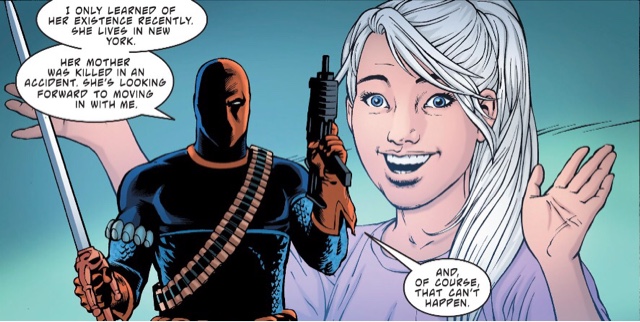 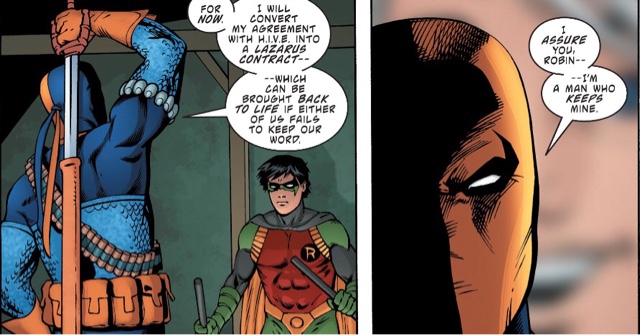 Here and now, Wally's friends in the Titans, and the Teen Titans, try to stop the other Wally West, Kid Flash, from feeling guilty about his part in Deathstroke gaining super-speed. Well, some try to make him feel better. 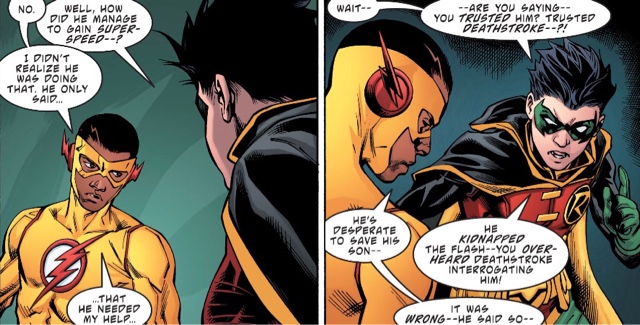 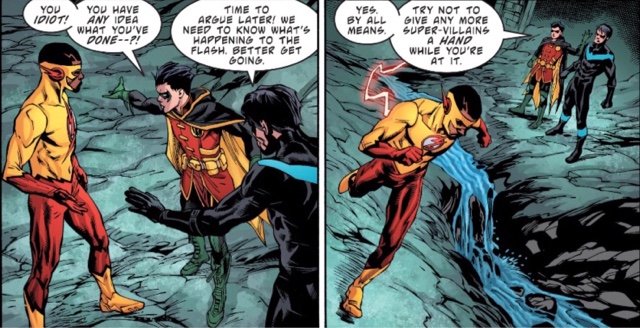 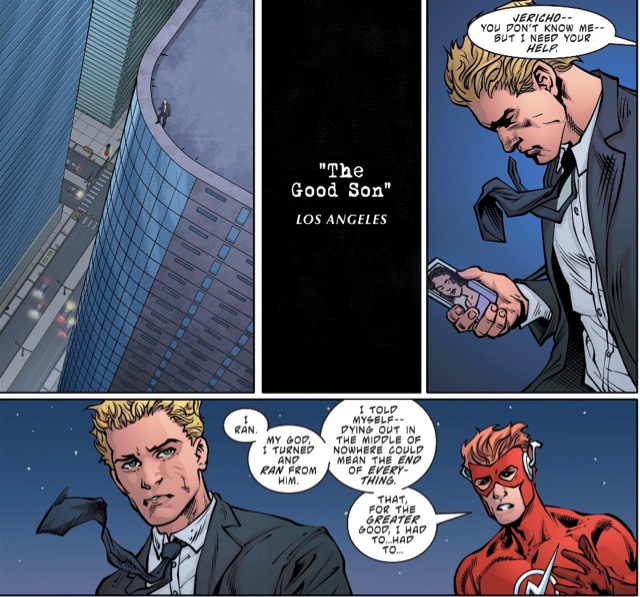 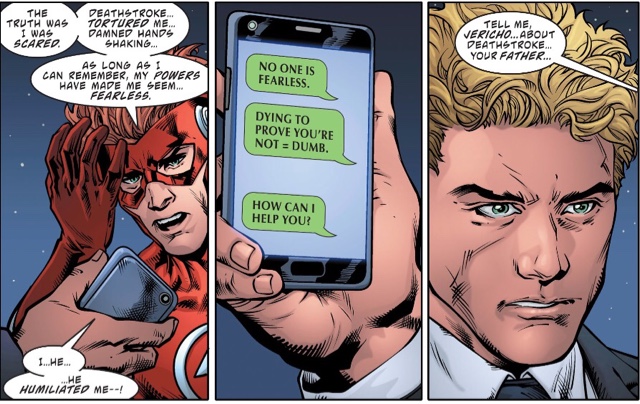 As for Slade, he's hellbent on travelling into the past and stopping his other son, Grant, dying in battle with the Titans - but not before he ties up existing business, post haste. 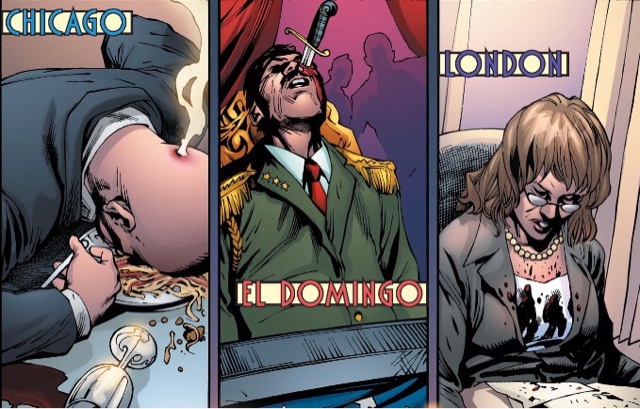 Part 3 of The Lazarus Contract fair sizzles, moving Deathstroke's time travel plot forward while filling in bits of the past. We get more flashbacks of Life with the Wilsons (it wasn't the Brady Bunch) and see that Rebirth Jericho is a lot more stylish than the original, pre-Crisis guy, with his perm/sideburns head ensemble and ridiculous costume. The new outfit isn't great - he looks like a Madman cosplayer, and the Grifter-style mask is way too Daddy Slade - but at least he no longer looks like a refugee from the Bolshoi Ballet. 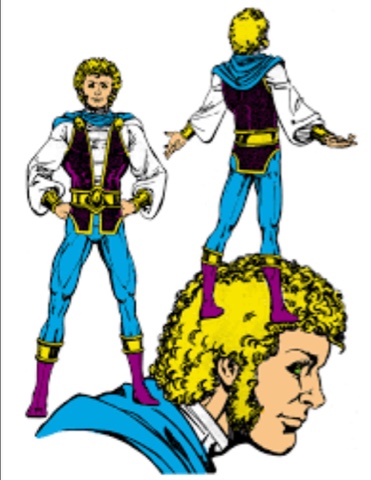 I do prefer Eighties' Jericho's mode of communication. He got past muteness by signing, teaching his fellow Titans American Sign Language; new Joe Wilson can, apparently text super-fast. 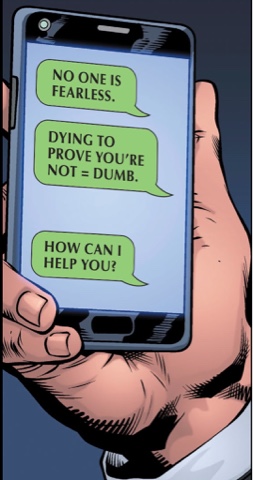 Mind, this does give letterer Willie Schubert a chance for some fancy footwork, as the text translates to word balloons. 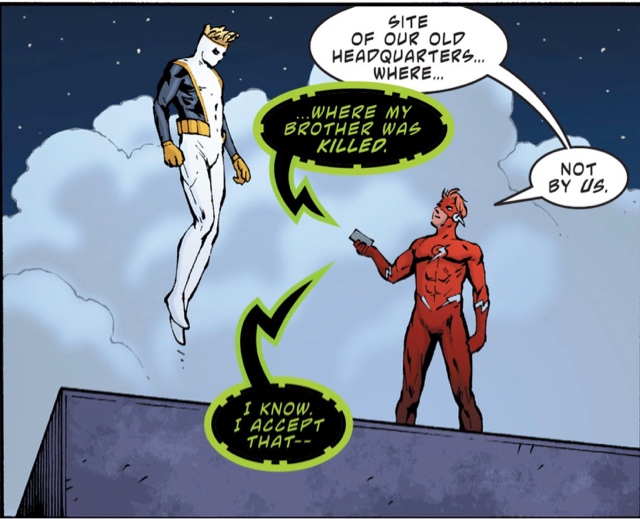 Willie Schubert! Where have you been? A couple of decades back he was a regular name in the comics, his slanted fonts as distinctive as the work of Tom Orzechowski or Bob Lappan. And it made me smile so much to see him on this comic. Reading around the web, he does look to be the regular Deathstroke guy. I hope Willie's cheery choices stick around the DCU.
The other big visual treat this issue is the art, which begins with breakdowns by Larry Hama. He's best known for his writing on the likes of GI Joe, and while I knew he'd drawn a few comics, I'd never seen any of his continuity work. Well, wow - the storytelling is wonderful, and if DC don't sound out Hama on a speedster strip, they're missing a trick; just look how well he draws folk running.

Working from his layouts are penciller Carlo Pagulayan with Roberto J Viacava, and then in come inkers Jason Paz with Sean Parsons. So many names point to a rush job but this is a great-looking book; it could be that the talents of colourist Jeromy Cox smooth out the odd rough edge, but the basics have to be pretty good.
The always excellent Priest provides the script, ensuring we get plenty of insight and characterisation along the way. 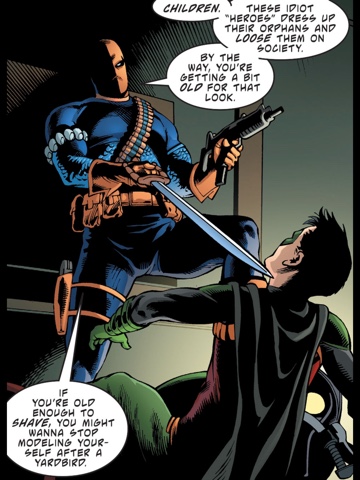 Given that Dick took Deathstroke's deal shortly after his first meeting with them, am I right in guessing that the Judas Contract never happene? If Slade agreed to stay away from the Titans, that leaves no room for the story featuring Terra, that buck-toothed Lolita of lunacy. Dumping such a beloved tale from the working canon seems odd, but it does leave room for an introduction down the line - or the addition to a Titans team of Power Girl's pal Atlee, who's been a pretty great Terra these last few years. Also, Wally says Jericho doesn't know him, so there you go.
As for the ongoing DC Rebirth mystery, it's barely touched on but we do see that Deathstroke is blaming the wrong person. 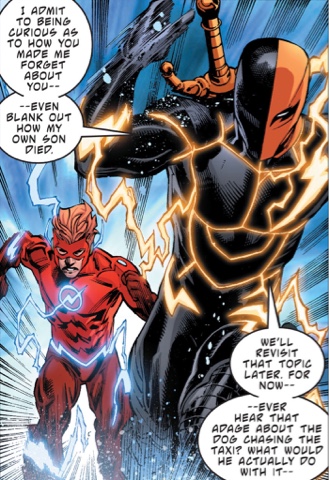 I'm not a Deathstroke fan by any means, but I do like Wintergreen, the anti-Alfred. There has to be an untold team-up in the past of the two batmen...
The covers are both decent but neither knock me out. The third of Mike McKone's connecting images, coloured by Alex Sinclair, is good, but the busy background means nothing really pops. Ivan Reis's variant, meanwhile, with colours by Hi-Fi, has a decent Deathstroke, but the tiny Titans are lost amidst the colourful crackle.
The story concludes in Teen Titans Annual #1 next week, and I'm hoping for a climax that has lasting effects for our heroes and villain.  See you there?
Carlo Pagulayan Deathstroke #19 review Jason Paz Jeromy Cox Larry Hama Priest Roberto J Viacava Sean Parsons Willie Schubert