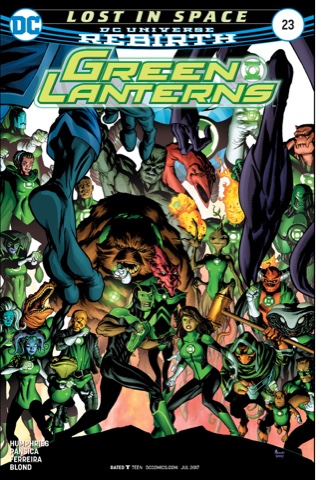 It's back to school for Jessica Cruz and Simon Baz as they're summoned to Mogo for Green Lantern training. Simon has already had some lessons, so he's on the advanced course. Jessica is well up for boosting her knowledge and fighting techniques, but after learning on the job with, first, the Justice League, then Simon, she's not happy to have had her Green Lantern symbol torn off her until Corps Leader John Stewart reckons she's ready.
And as for training under longtime Lantern Guy Gardner. 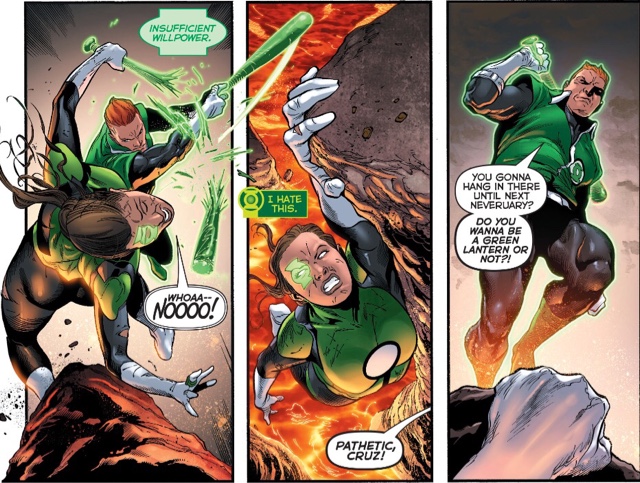 Simon is finding that trainer Kyle Rayner wants him to think again. 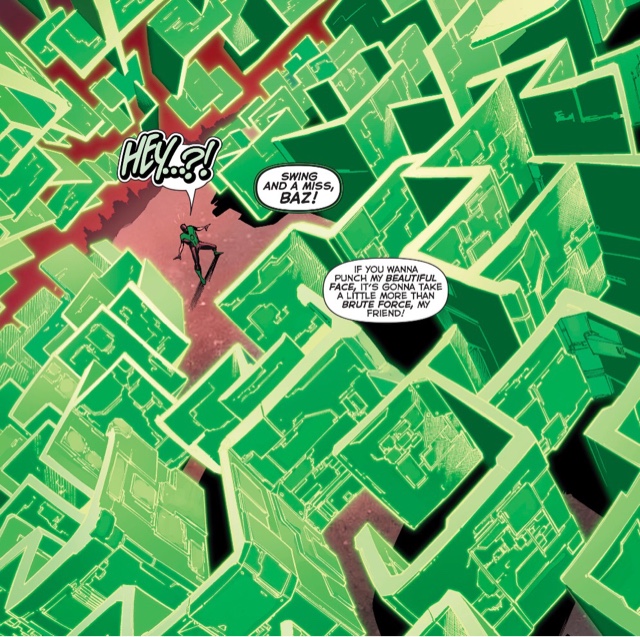 Meanwhile, the Guardian Rami - secretly twisted First Lantern Volthoom -  plots against the Corps, and despite being in the Hall of Forbidden Records, is surprised to discover a truth kept hidden. 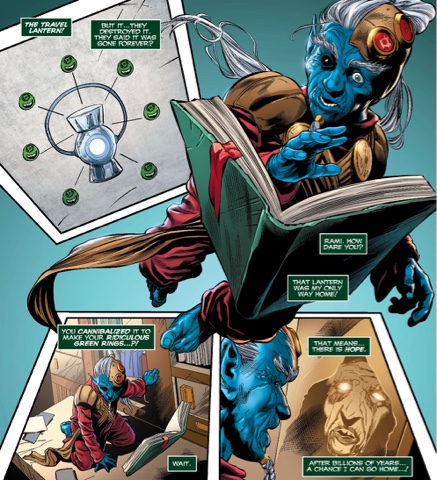 And not-Meanwhile by some ten billion years, we meet not the First Lantern, but the First Green Lantern. 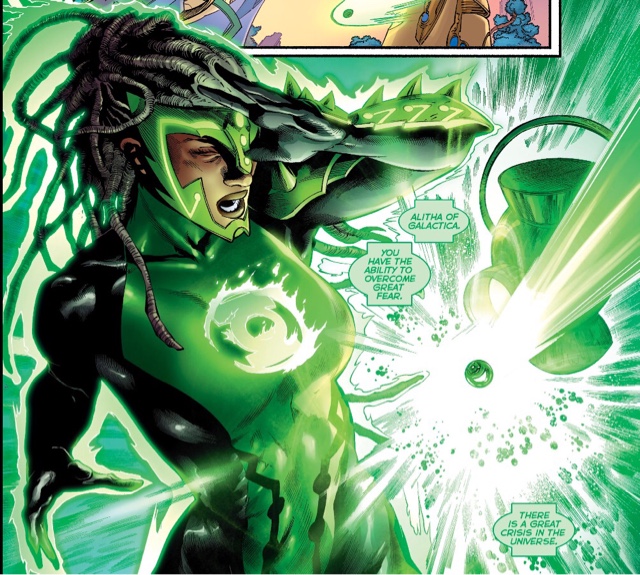 The mythology of the Guardians of the Universe has become so huge over the past 20 years that a devotee-turned-casual-reader like myself had to resort to the web to work out who current Volthoom is. I remember the pre-Crisis Volthoom's connection to Power Ring of Earth 3 and knew Jessica Cruz's ring had some link to a being of the same name, but what it was I didn't know.
That's not to say I wasn't able to enjoy the comic first; I'm a longtime reader of these things, I don't need much beyond what's on the page. Volthoom = evil cuckoo. Fine. But I couldn't not check the wikis to see if this was new....

The Travel Lantern. Does it fold up in a tiny case and go in your supervillain manbag? Apparently not, and it's been around prior to this issue. Sam Humphries' pacy, entertaining script guarantees I'll stick around awhile to see what comes next. It helps that Jessica is no longer defined by her anxieties, or Simon by his gun. They're better company, which may be why they're getting along much better; heck, Simon even has a nickname for his GL partner, J-Bird (it's super annoying).
Guy Gardner's a bit rougher on Jess than I'd have expected, given how much he's matured over the years, but if he suffered under Kilowog, he maybe wants to pass on the harsh lessons to someone else. Which makes it all the sweeter that it's Kilowog himself who gives Jessica a really useful piece of advice.
Kyle isn't so mean as Guy, but he's certainly having fun trying to get Simon to think outside of the box/gun cabinet. And it really is wonderful to see Kyle smiling after his recent travails with the Omega Men
Eduardo Pansica, who did a brilliant job on Firestorm in DC's Legends of Tomorrow anthology, brings the same energy to this issue. Every page is a model of dynamism, the storytelling is excellent and I really wish DC would get on with ordering a Firestorm ongoing for Pansica and Gerry Conway. New first GL Alitha is striking, her people have an adorable fairytale quality, while Kyle's maze is, well, amazing. Credit, too, to inker Julio Ferreira and colourist Blond for their vital contributions to this great-looking issue. 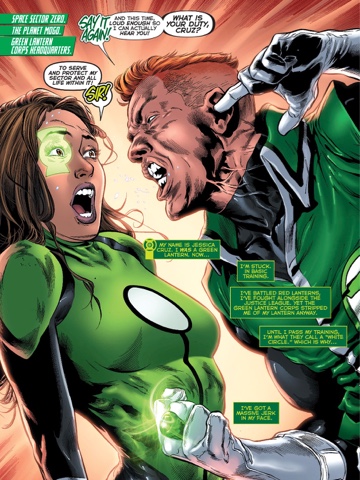 Take the splash page, for example, which could easily have been presented as a grim situation, with Guy bullying Jessica - the body language, Jessica's expression, have a slight cartoonishness that leavens the situation. The colour lines behind the characters add focus and excitement.
That page also gives the other creators, so a round of applause, too, for letterer Dave Sharpe for his smart choice of shades and backgrounds, and the entire editorial team. 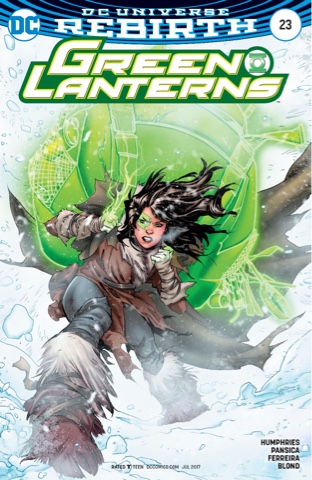 I like the idea of Mike McKone's main cover more than the result - it certainly gets across the idea that Simon and Jess are overwhelmed by the size and power of the Corps, but it's a little too busy, with the legs dangling in the foreground muddying the view. But I have to acknowledge the craft and effort of McKone and colourist Jason Wright.
Emanuela Lupacchino's illustration, coloured by Mike Atiyeh, is a nice representation of Jessica's struggles under Guy, taking a pretty throwaway panel from the issue and making it sing.
Green Lanterns #23 is an an important step in the heroic journeys of Jessica and Simon, and a jolly good Corps tale all-round. Recommended.
Blond Dave Sharpe Eduardo Pansica Emanuela Lupacchino Green Lanterns #23 review Jason Wright Julio Ferreira Michael Atiyeh Mike McKone Sam Humphries