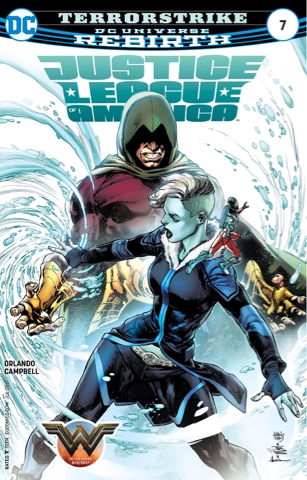 It's a downtime day for Batman's Justice League of America. The Caped Crusader is at headquarters checking out the work of weapons maker turned Secret Sanctuary fixer-upper Xenos. 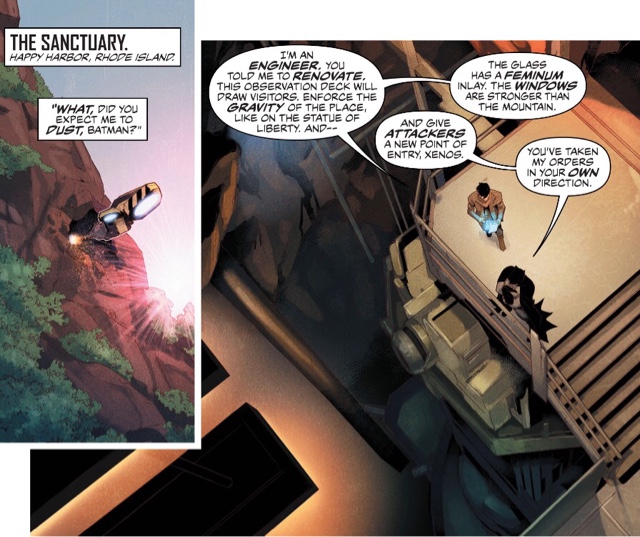 In Manhattan's Museum of Unnatural History, the Atom, Ryan Choi and Killer Frost, Caitlin Snow, have a lead on a cure for the latter's need to snatch life force to survive. 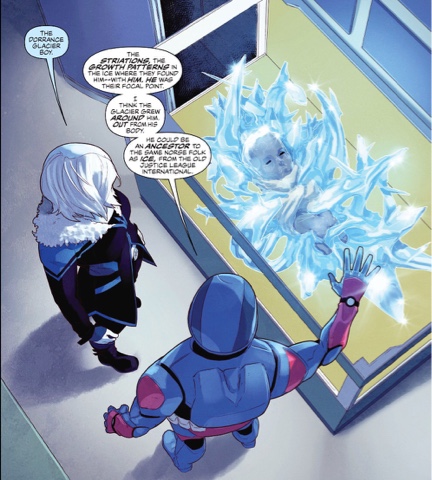 The museum guards aren't feeling so positive when a creepy-looking visitor proves you can sometimes judge a book by its cover. 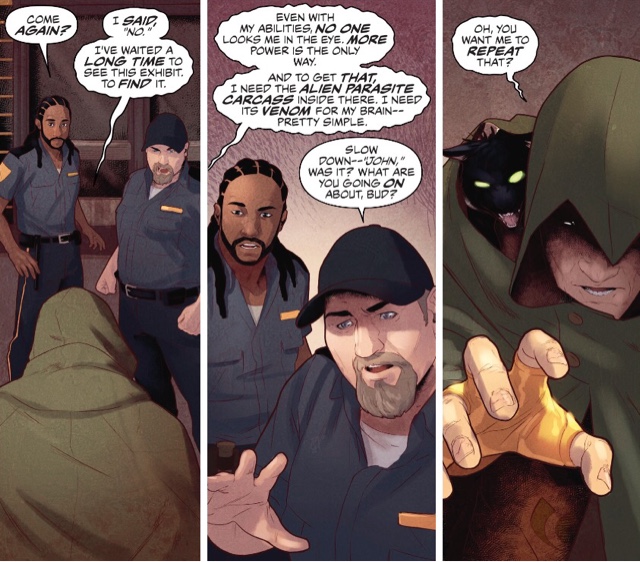 Soon it's bye bye guards, hello monster men as the stranger reveals himself as a leftover from the long-ago Bloodlines event. 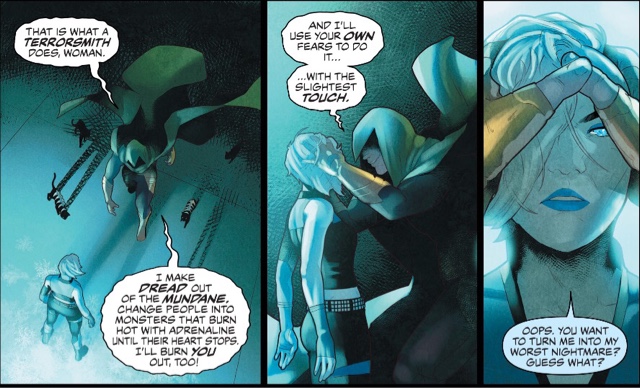 Can recent super-villain Killer Frost and neophyte hero Atom beat a man who can turn people into horrors and save the transformed guards? You betcha, with a rather neat exhibit and an attitude born of a tragic past.
This issue also features the Ray & Vixen doing a spot of outreach, and Lobo & Black Canary fighting an opponent with a name right out of the Golden Age. 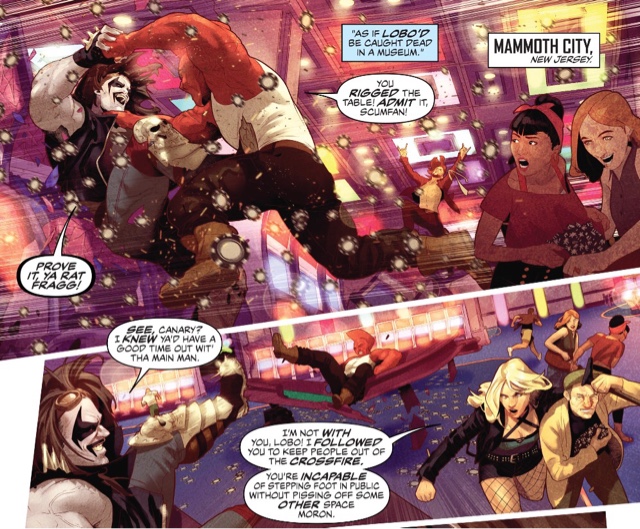 I remember the heroic Mr Scarlet appearing in JLA when I was a kid, in the Seventies. This guy seems to date from Kingdom Come, but I'm darned if I can remember him. And does this Mr Scarlet have a Pinky? 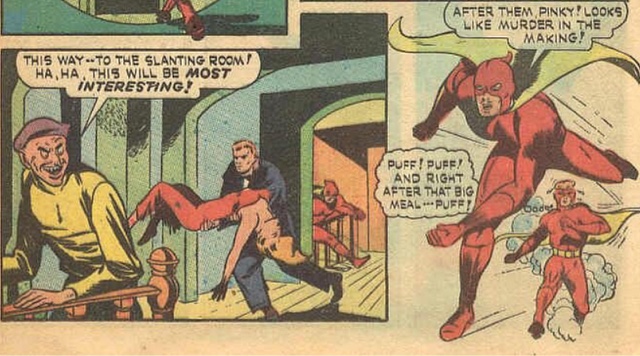 Given how quirky the original father and son act were, I'd rather like them to have a DC Rebirth.
Before a final page that seeds future stories, we get a rather endearing scene between Killer Frost and Black Canary regarding the burgeoning friendship of Caitlin and the Atom. 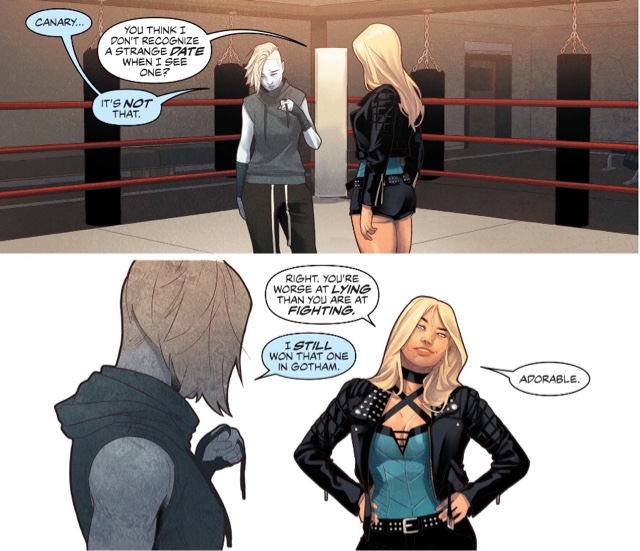 It's funny, I was dubious about Caitlin being on a hero team, but writer Steve Orlando has me cheering for the glacial gal as she strives to deal with the hand fate dealt her. I'm still not convinced that Batman would put up with, never mind enlist, Lobo for the JLA, but can't deny he's entertaining.
The question this issue leaves me with is, who is the 'she' who put Terrorsmith on the trail of dead Bloodlines alien Glonth? Given beastly transformations are involved, it could be Circe, but I could easily imagine Jack Kirby's Morgaine le Fey lurking in the shadows. Then again, Orlando's a tricky one, delightfully well-versed in the cornier corners of the DCU - take the opening page's shoutout to TV Wonder Woman's Feminum metal. So 'she' might be a gone-bad Yellow Peri. Or Aunt Harriet. I can't wait to find out.
I'm also intrigued by the mystery of the Dorrance Glacier Boy - in the DC Universe, 'Dorrance' conjures up Dane Dorrance, leader of the Sea Devils... I'd be amazed were the name a random choice.
I can't say I was itching to see Terrorsmith again, but with this series and the earlier Midnighter books, Orlando has shown a real knack for spinning presumed dead characters and concepts into gold. Terrorsmith is genuinely creepy here, not only due to Orlando's pithy prose but thanks to the full colour art of Jamal Campbell, who impressed with the DC Rebirth Vixen one-shot. Campbell's characterisations capture both the specifics and spirit of Orlando's scripts, and his action scenes really pop. And did you ever see such malevolent moggies? Particularly impressive is a splash panel showing Atom going into action, though every page rewards a close look. 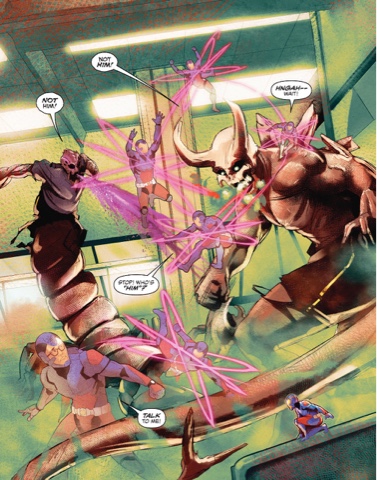 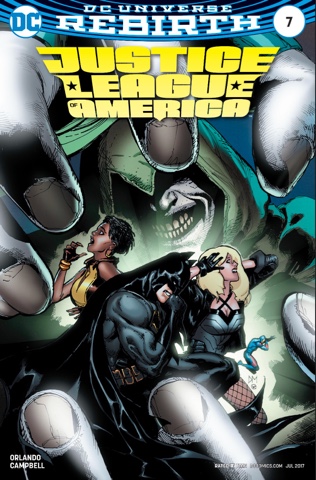