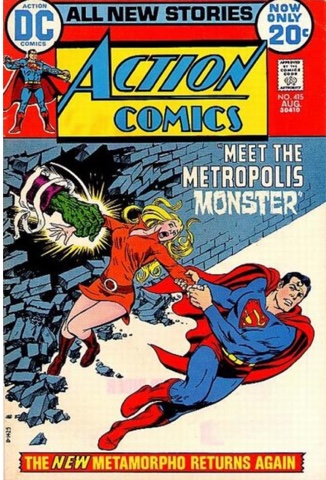 One day in Metropolis, TV newsman Clark Kent gets an unexpected visitor. 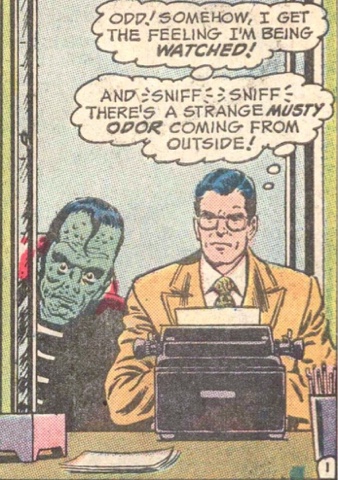 Behold the crack reporter, nothing gets past Clark. The strange visitor lunges at the mild-mannered newsman and rips open his shirt, revealing the famed chest-symbol of Superman. Luckily, Clark is alone in his office, meaning his secret is safe... and he can fight back. He kicks the brute out of the window. As the monster lunges away, Clark faces a more pressing problem - worried WGBS colleagues have heard the fracas and are trying to get into his office to check he's safe. Time for a super-speed save. 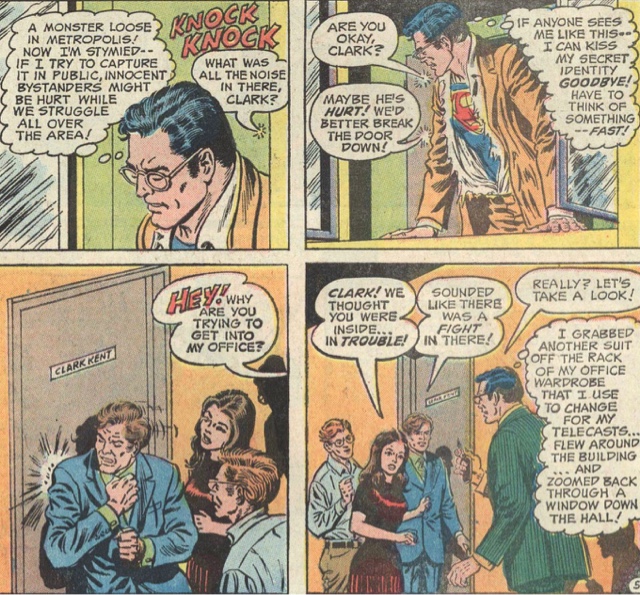 Metropolis trembles as the creature stalks the streets. 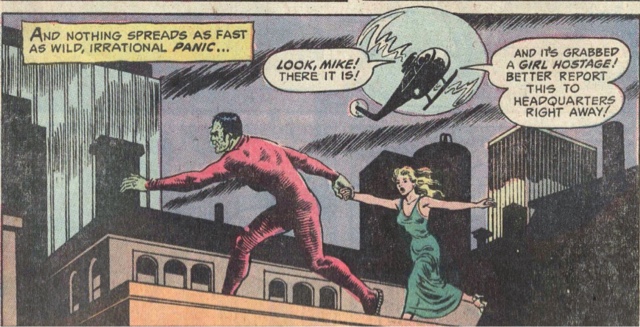 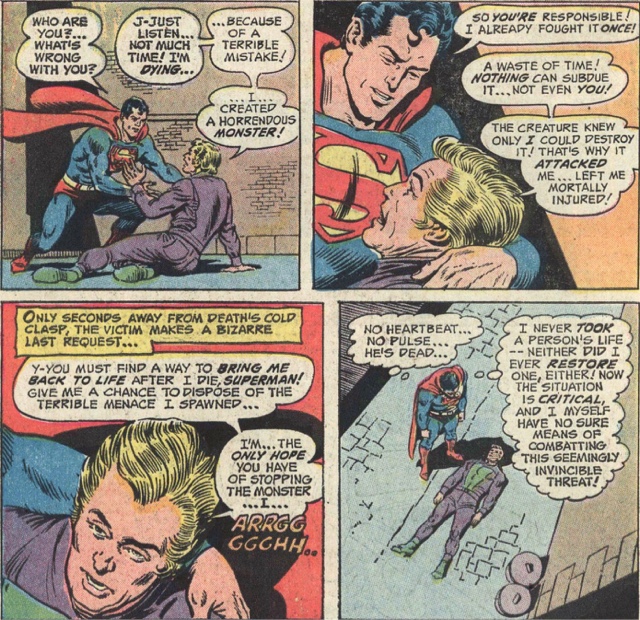 It turns out Kryptonian super-science is better than we knew. 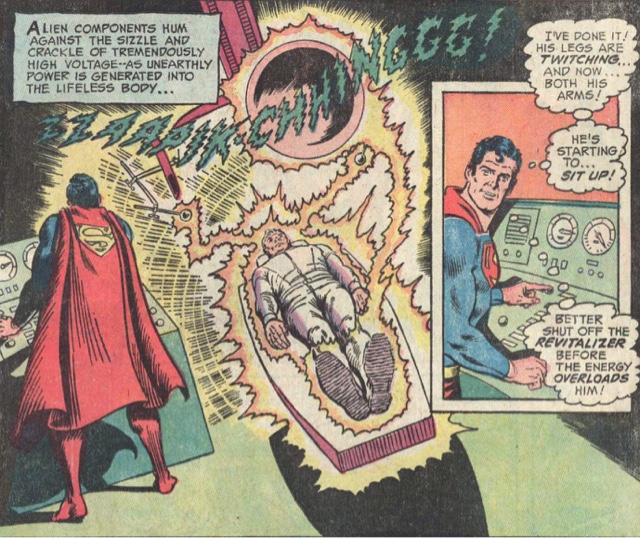 Enter the green Goliath and his... hostage? 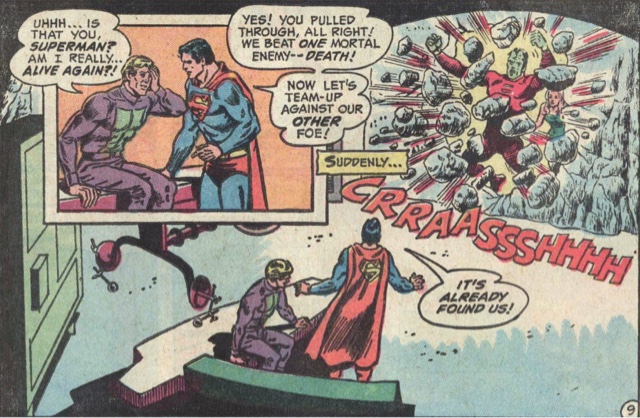 Predictably, a fight ensues. Less predictably, Superman gets a lecture. 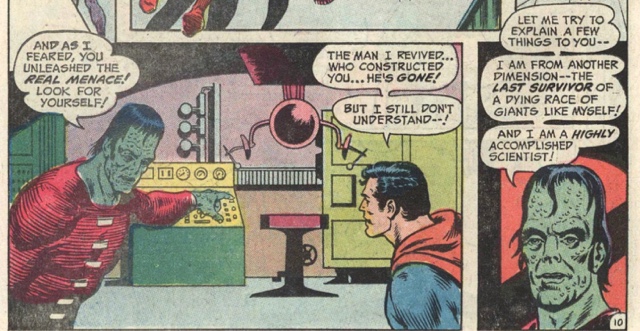 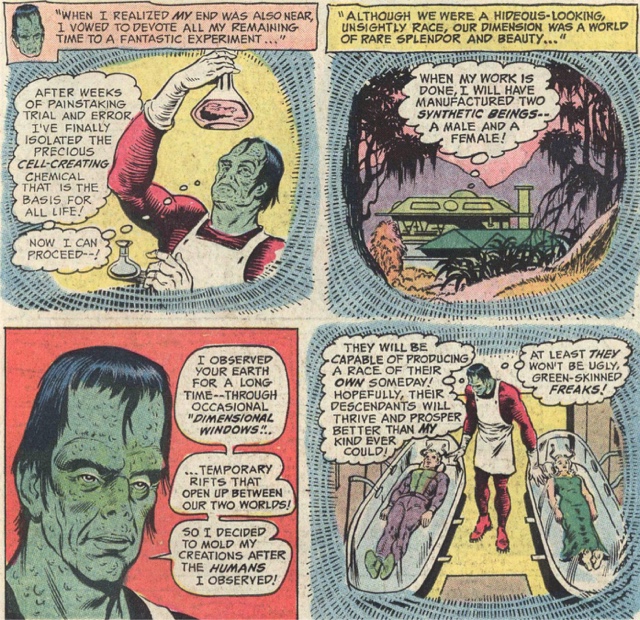 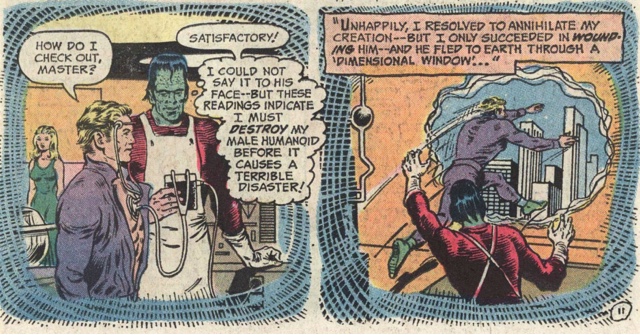 The failed fellow has pulled a similar trick now, disappearing from the Fortress of Solitude as his creator fought his saviour. He's outside in the snow, and his fatal flaw is manifesting. 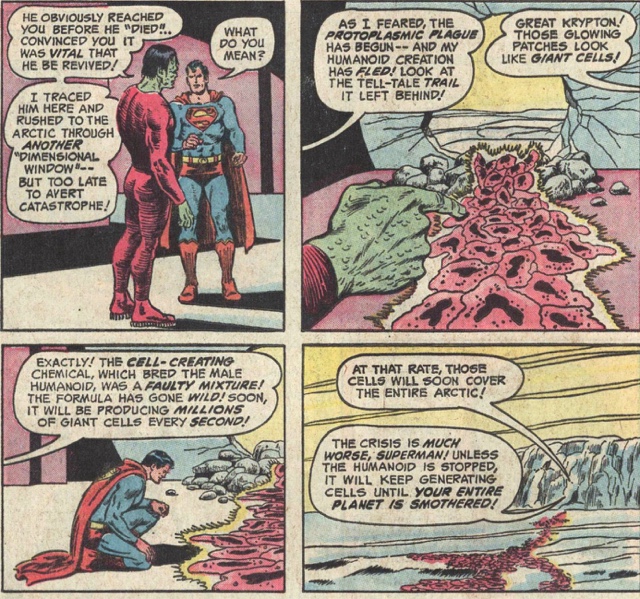 Ulp. Superman, though, has a lot more experience than a newborn pseudo-human covered in pink fried eggs. 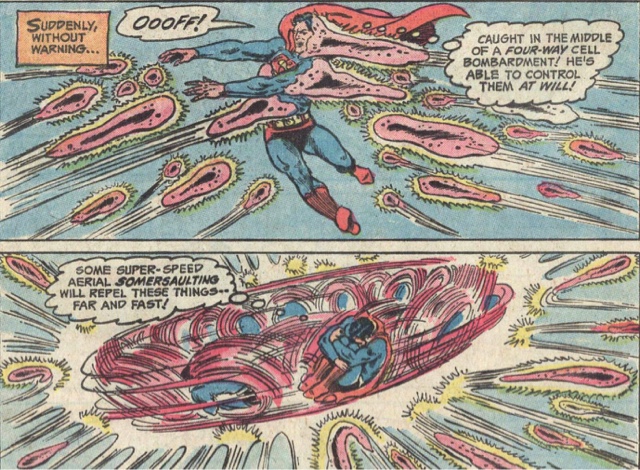 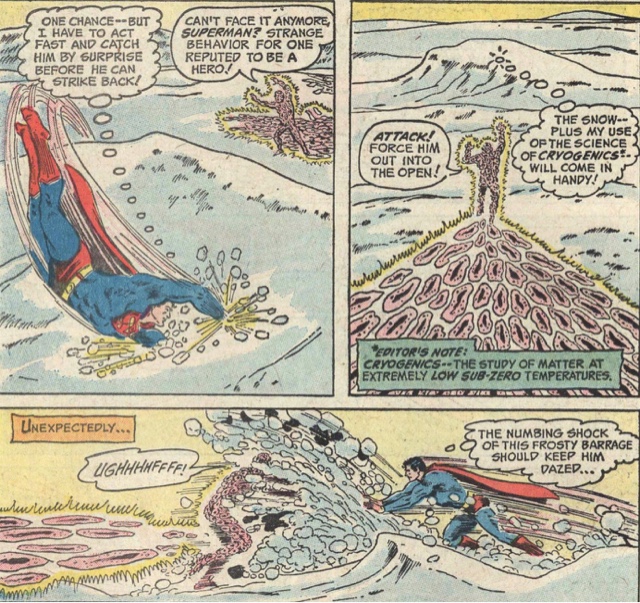 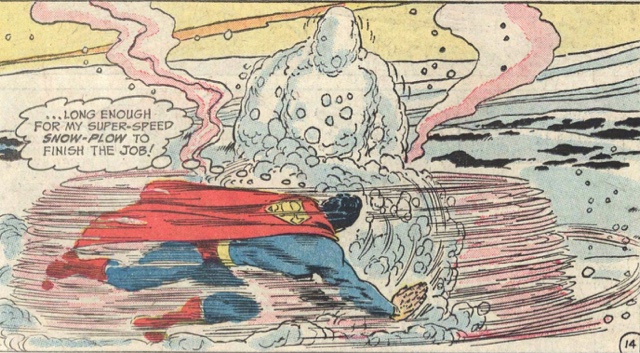 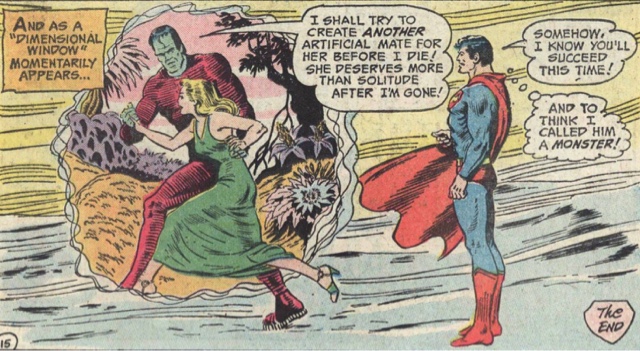 Or rather, a creepy close, as the beautiful mute follows her master back to an empty world so he can satisfy his ego by creating the perfect mate for her. Wouldn't it be kinder to leave her on Earth, where she could meet similar human types, maybe learn sign language?
More likely, the unnamed scientist has taken a shine to her and is rushing her home for a few decidedly non-clinical experiments.
That apart, I really enjoyed this story from writer Cary Bates, penciller Curt Swan and inker Murphy Anderson. The opening is a grabber, so much so that I can let go the fact that a Frankenstein Monster lookalike is hardly going to seem especially outlandish to a man who has been all across time and space.
I do like the explanations as to why the scientist 'attacked' Clark in the first place, why he grunted, and why he whiffed a bit. 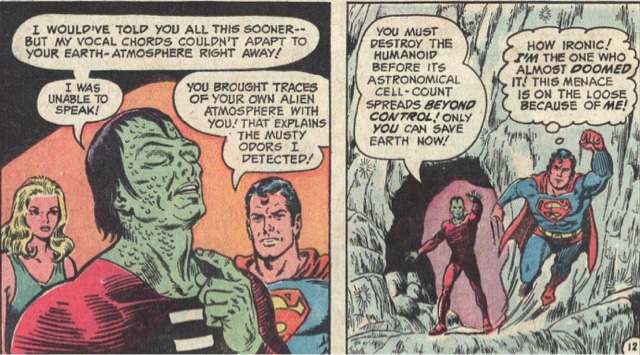 And of course, a thousand million points for the 'How ironic'. Sadly, there's no '>choke<'.
Bates might have informed us as to why the 'humanoid' wants to be brought back to life to spread the Protoplasmic Plague. Maybe he's just a wrong 'un. 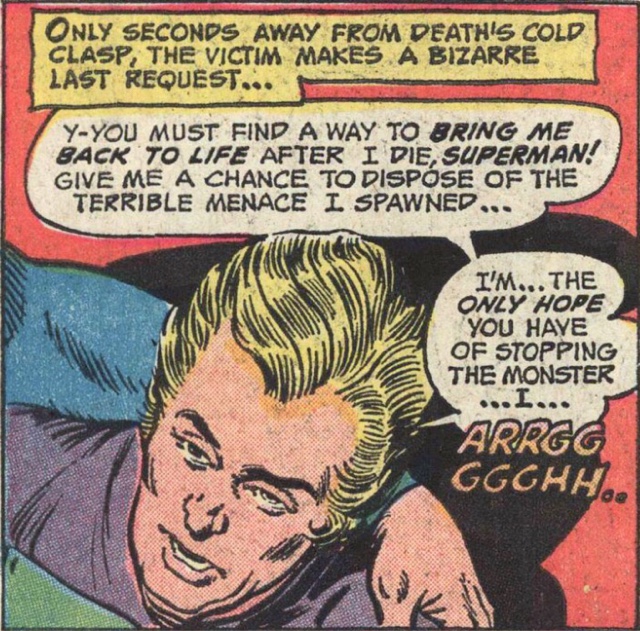 Mind, this panel is a tad ambiguous, perhaps he thinks the plague is already free and he can help if he's alive - though dissection would surely prove more useful.
And the moral of the story - don't judge a person by their looks - is a bit of a hard pill to take. It's not just the scientist's appearance that alarms Clark and has him jumping to conclusions, it's his behaviour. Rushing at Clark, menacing Metropolis... who wouldn't assume he's a real monster? And if we are talking looks, well, even the scientist considers himself an 'ugly green freak'. 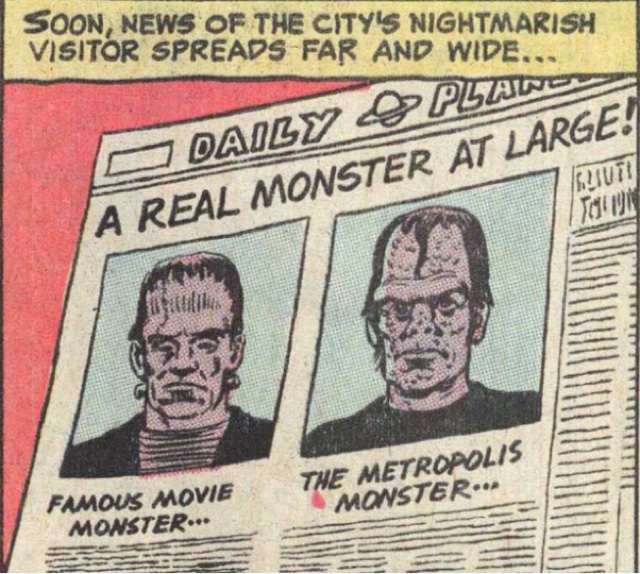 I'm curious as to why the Frankenstein comparison is never directly made by anyone in the story. The way the Daily Planet splash tiptoes around it is just daft. 'Famous movie monster' indeed! Just a few months after this, DC introduced the Spawn of Frankenstein strip, so presumably someone had checked out the copyright situation.
And today Frankenstein, Agent of SHADE, is a regular in the Superman title.
This is peak 'Swanderson' art, with Curt Swan going bigger than he was often wont to, and Murphy Anderson adding his own strength and sharpness. The art is hugely accomplished and likeable, with standout scenes including that rooftop 'romance' of monster and maiden and Superman's struggle against the space cancer.
Nick Cardy's cover is as clean, powerful and all-round gorgeous as any of his Seventies work, daring potential buyer to pass this one up on the newsstand.
As Bronze Age Superman stories go, Meet the Metropolis Monster is horribly good fun.
Cary Bates Curt Swan Murphy Anderson Retro Review: Action Comics #415 (August 1972)