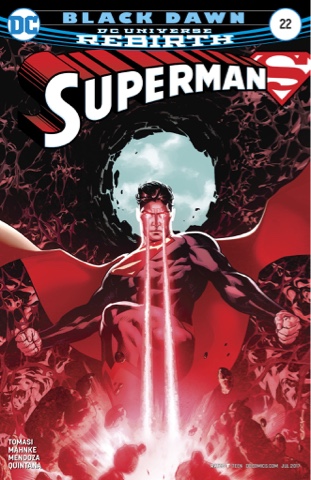 Lois Kent is worried. Husband Clark, son Jon and family friends Bruce and Damian have gone missing. And whatever can stop Superman, Superboy, Batman and Robin returning begs to be investigated. Luckily, Lois Kent is also Lois Lane, one of the world's top investigative reporters. 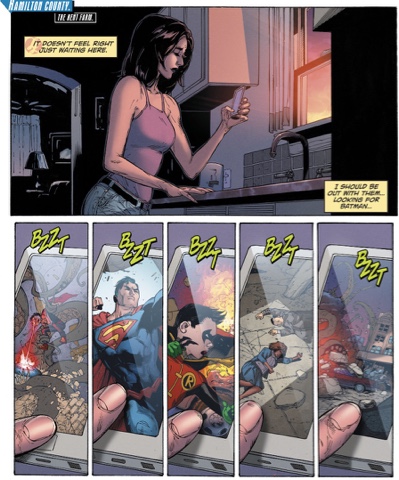 Outside her home, the tree often occupied by Jon and his friend Kathy burns. And beside it... 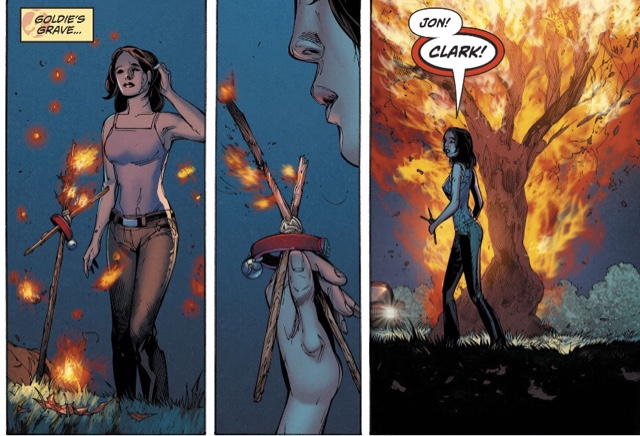 Taking the no-longer-burning twig, she leaves the family farm to see what's been going on in Hamilton. Clark, Jon and Damian defended the town against a giant squid monster, and beat it, so why hasn't she heard from them? Are they still looking for Batman, who vanished earlier? Have they been kidnapped? Or worse? In town, Lois' instincts, as honed a weapon as any super-power, kick in. 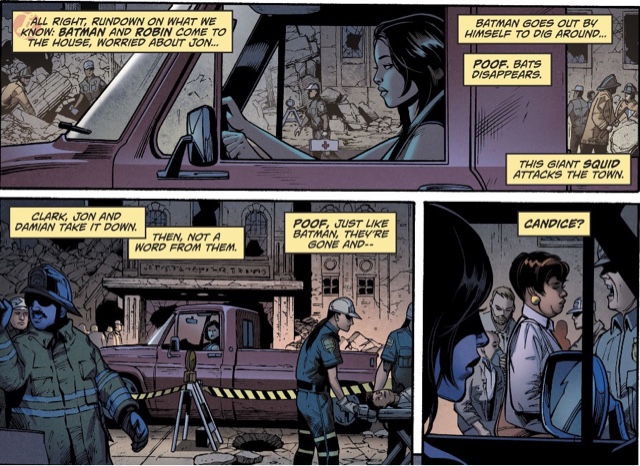 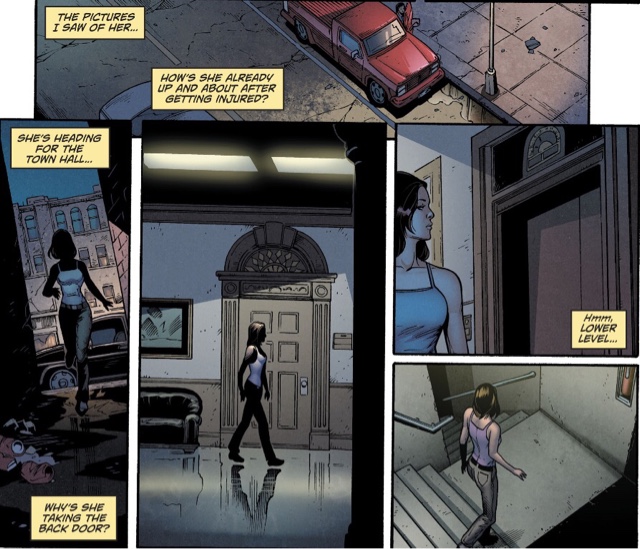 Realising there's a massive conspiracy - is the entire community a honeypot to snag her family? - Lois rushes back home, where the town's worthies are waiting. They underestimate 'Mrs Kent'. 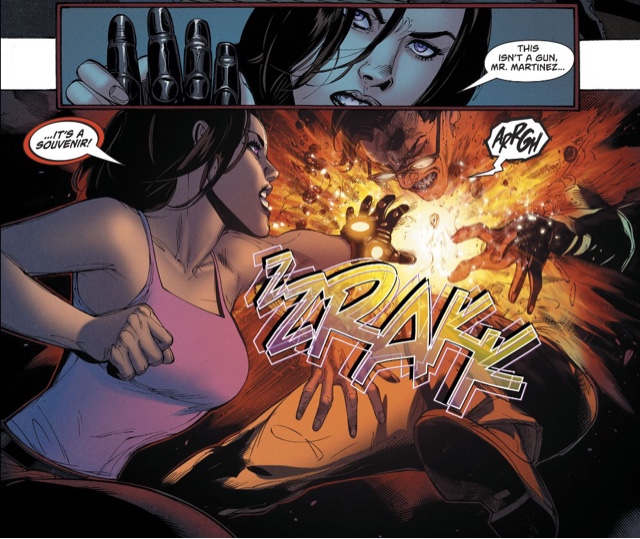 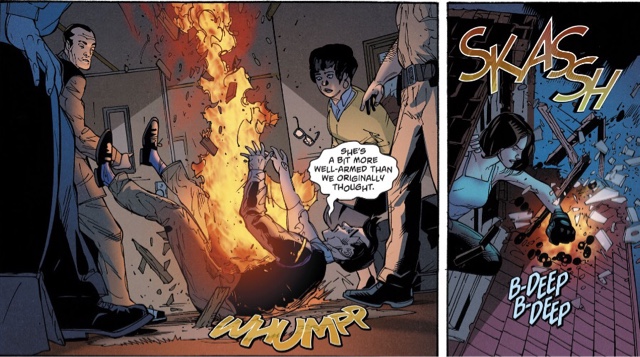 Earlier in the comic I thought, shame she's not got that amped-up Bat-Gauntlet from the Eradicator adventure on the moon handy, and here it is. This isn't a deux ex machina - for one thing, it doesn't entirely save the day - it's writers Peter J Tomasi and Patrick Gleason playing fair with the reader. There's a callback to an even earlier issue, the first, in fact, in departed cat Goldie's grave; I don't see the clue in the burning memorial, but I'm not the reporter Lois is.
By the end of this third chapter of the Black Dawn story, Lois has impressed even more, reminding us that her survival instincts easily match her reporter's chops. Superman, meanwhile, comes across a shocking sight...
I'm getting dangerously close to taking the quality of this series for granted. It's been almost a year and there honestly hasn't been a bad issue. Even the one I had most qualms about, the debut in which Jon accidentally fried Goldie, looks set to have a different light shone on it. Last issue we learnt that neighbour Kathy isn't as innocent as she seems, and has some kind of mind powers; I wonder if Jon losing control of his heat vision and killing the kitty wasn't an accident, but a deliberate act to unsettle him. She was standing just yards away, ready to introduce herself. 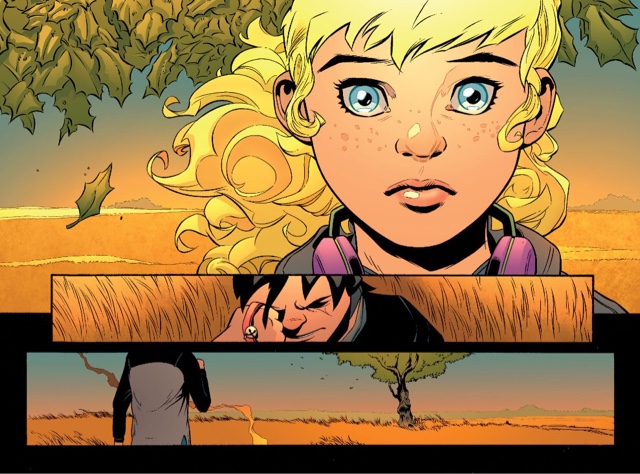 I read innocence into her expression, but it could easily be the concentration of a demon child.
The storytelling team of Gleason and Tomasi, in their work here and with the Batman Family, have developed an enviable partnership; they understand one another, and their characters, meaning we get brilliantly crafted stories in which events feel organic, the players real. The credits don't point to a single scripter - once I would have assumed Tomasi, with Gleason having co-plotted, but I'm not so sure at this point. Again, these guys are storytellers - even when Gleason isn't pencilling, as is the case this time, his visual sensibilities will be informing the script, and Tomasi, similarly, has been around long enough to have an equal hand on the storytelling tiller.
Doug Mahnke, this series' main alternate penciller, is back for this instalment, and he's always welcome. His style is a little less rounded than Gleason's but not so different that it jars - the pencillers complement one another. I suspect Mahnke is a big fan of Lois, given the care he puts into every shot.
Also impressive is the rural eeriness of the neighbours gathered in the Kent parlour, there's a sinister Ira Levin vibe. As for the action sequences, they fair sizzle. Inkers Jaime Mendoza  & Ray McCarthy, and colourist Wil Quintana add further layers of goodness, while indefatigable letterer Rob Leigh adds emotion with his fonts and placement.

Both covers are great - illustrator Ryan Sook's main shot of Clark, and penciller Jorge Jimenez and colourist Alejandro Sanchez' variant of Jon are majorly moody - but heck, where's the star of the show? Forget that 'Superman' logo, this is Lois' issue - having her on the variant, one of her classic mastheads atop an image of the ace investigator, would have been lovely. 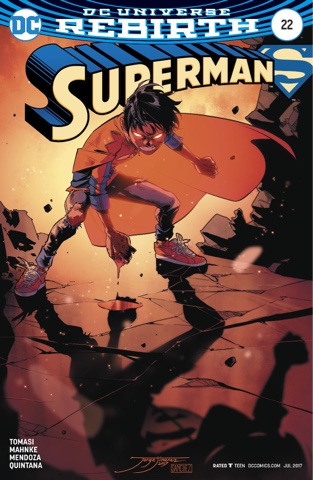 Still, the main thing is, this is a splendid showcase for one of comics' top characters - who knows, it may be a step to getting Lois back in her own series.
THE REDUCTIVE BIT!
**** 8/10
Alejandro Sanchez Doug Mahnke Jaime Mendoza Jorge Jimenez Patrick Gleason Peter J Tomasi Ray McCarthy Rob Leigh Ryan Sook Superman #22 review