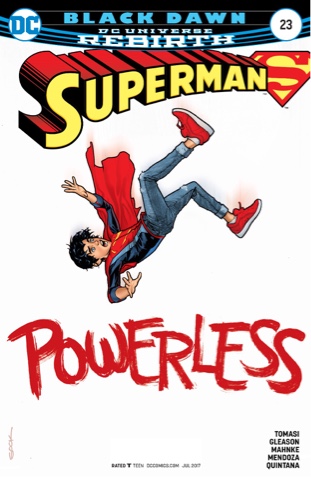 As a curious, angry Lois is telekinetically kept at bay by neighbour turned antagonist Cobb Branden, Superman examines the prison tubes containing Batman, Robin, Frankenstein and more. Lois assumes, reasonably, that Cobb is a villain, but he disagrees. 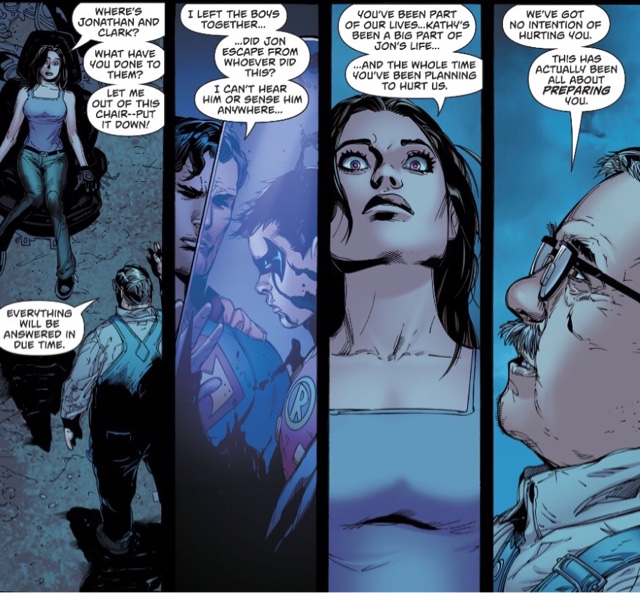 Lois fights back with her Bat-gauntlet, angering Cobb and bringing a very angry Superman to the scene, in one of the most striking splash pages I've seen in a long while - I'll even forgive the burning red eyes cliche. 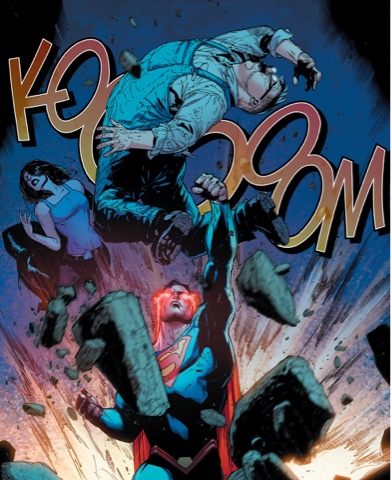 He detains Cobb but before he can concentrate on finding son Jon, who isn't with the other prisoners, a monster stampede in the town of Hamilton demands his attention.
He's not the only metahuman on the scene, and they're not holding back following the failure of some doorway to nightmare.

Superman is surprised to learn that these unfamiliar figures are actually Hamilton's civic leaders. 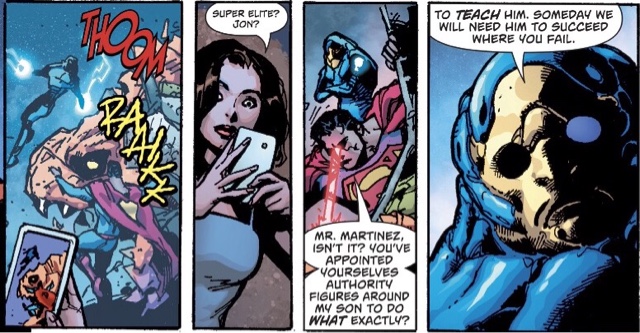 And they're also denying the newfound conspiracy against Lois, Clark and Jon has sinister motives (can a conspiracy ever be benevolent?).
Jon, meanwhile, is being forced to watch his parents' travails, and showing their spirit. 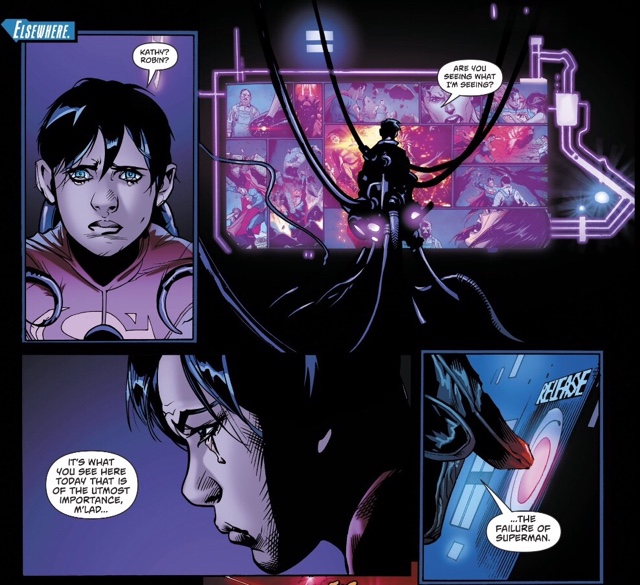 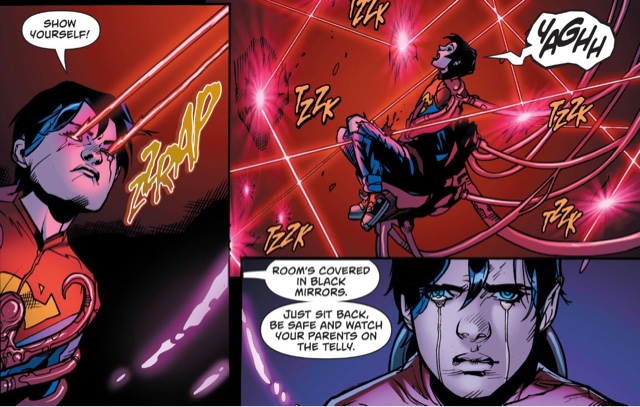 The Super-Elite don't flinch at using lethal force on the monsters, but Superman resists... and Lois pays the price. 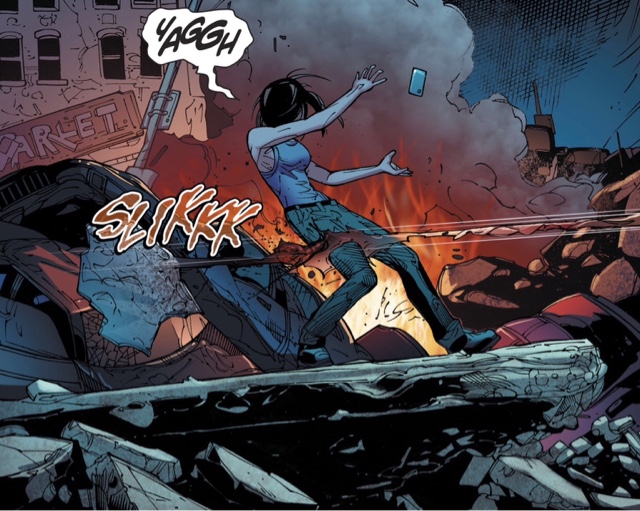 Ouch. And indeed, YAGGH. Poor Lois. I don't doubt her leg will be reattached, or grown back, or a time-reversal will mean the incident never occurred, or there's a very powerful illusion in play, but it's still tough to see one of my favourite characters maimed, and half-mad with worry for her missing son.

While the battle for Hamilton dominates the issue, the overall story moves on as Jon's captor introduces himself and reveals his motives. The master villain is an intriguing character, the antagonist in one of my favourite Superman stories: our hero really showed him who was boss that time, but this formidable foe has had a lot of time since then to perfect his scheme.
The excitement is palpable as Lois and Clark struggle against physical threats that distract them from putting the pieces of the puzzle together. They're missing super-friends Batman and Robin, and their own super-son, and don't know if the whole town is against them, or simply a select, very dangerous, few.

It's no surprise that Superman never trusted Cobb, that was obvious, but why did he never investigate? When he says...

... it's not entirely true, but he really does bear some responsibility for letting things get so out of control. The notion that recent reversals are his fault is so much on his mind that he makes a similar comment earlier in the issue.
In last week's Action Comics, set after this story, Lois and Clark's commute was a big reason for them relocating to Metropolis. Here, writers Peter J Tomasi and Patrick Gleason do a great job of giving us the rest of the equation; it's safe to say the shine has been taken off quaint old Hamilton. Smallville it ain't. The character beats are perfect, and Cobb and his unnamed - by me, anyway - associate fair radiate darkness.
Doug Mahnke's layouts are excellent throughout, it's thoughtful, dynamic storytelling, with Jaime Mendoza and Keith Champagne inking alongside Mahnke himself. All turn in quality finishes, but the scene-to-scene look is a tad less consistent than I'd like. Still, if that's the price for a fortnightly comic this entertaining, I can take it.
Hi-Fi do a bit of smoothing out with the smart colour work, while Rob Leigh letters, as ever, like a demon... or maybe, a printer's devil. The main cover, by Ryan Sook, is pretty much irrelevant to the comic; yes, Jon is powerless to help his parents, or himself, but there's no scene of him losing his powers. I like it though. Even better - though just as random - is the variant, whose simplified colours remind me of a Brian Bolland classic (and look, angry red eyes!). This one is by artist Jorge Jimenez and colourist Alejandro Sanchez.
Next issue, will Jon be corrupted by...
Alejandro Sanchez Brian Bolland Doug Mahnke Hi-Fi Jaime Mendoza Jorge Jimenez Keith Champagne Patrick Gleason Peter J Tomasi Rob Leigh Ryan Sook Superman #23 review