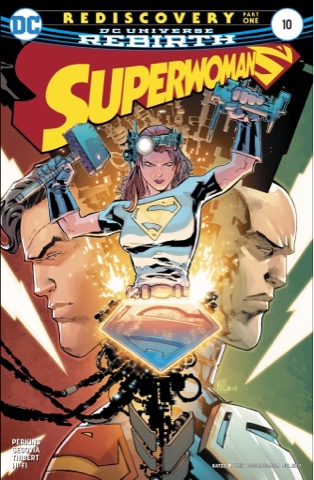 Lana Lang is fighting... someone. We can see the arms, and readers of Superman past with particularly sharp visual recall might recognise the villain as Skyhook, a monster who stole children from the streets of Metropolis.
Flash back several years and Natasha, niece of Lana's boyfriend John Henry Irons, gets herself home after her no-good dad Clay doesn't turn up to collect her from school.
Flash forward to a few months from today and in Smallville, Lane is having dinner with John Henry and Natasha, who's been remembering that typical, yet still sad, day 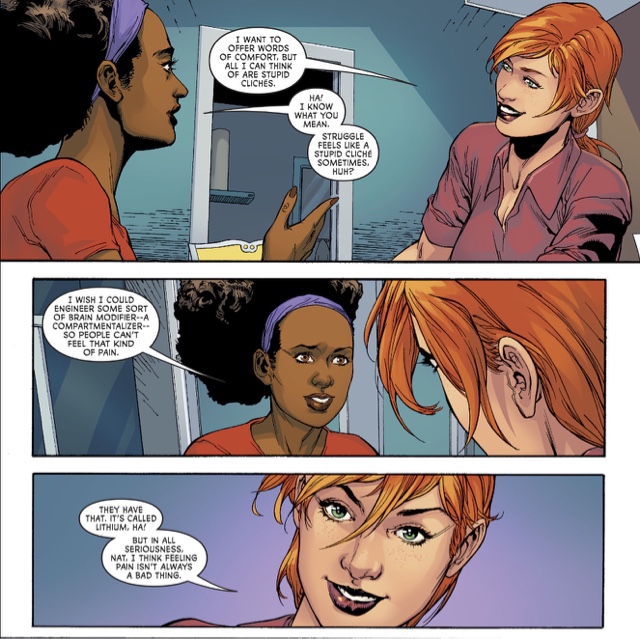 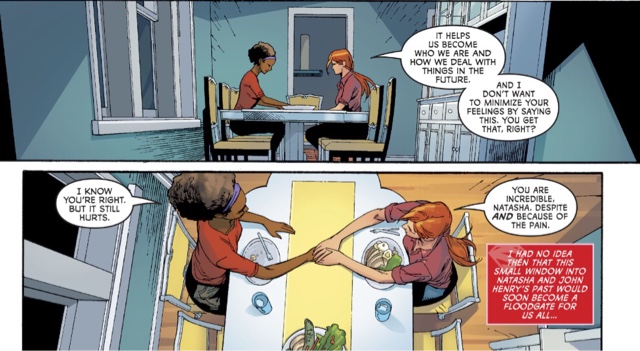 Flash forward to a few weeks ago and Lana is still having bad dreams about the day the New 52 Superman died. She wonders if Natasha isn't right about compartmentalisation. Later, Natasha and John Henry, both super-scientists, pursue a lead that may get Lana some powers back. 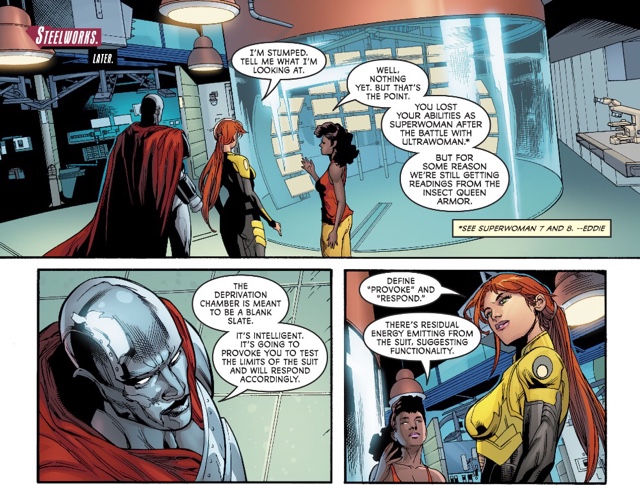 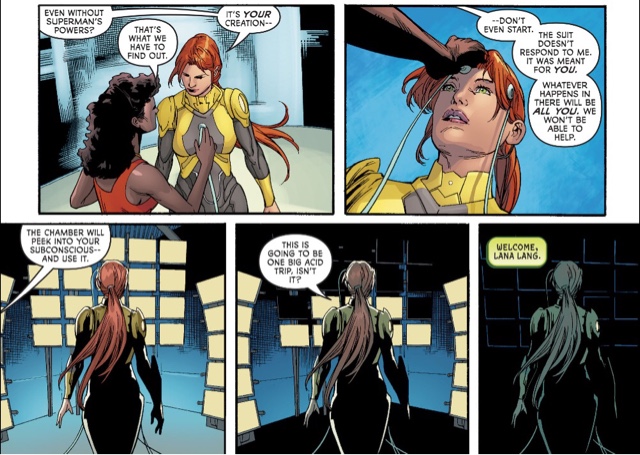 Lana is rightly disturbed by this 'danger bubble' that reveals her innermost thoughts, the secrets she's not shared - and then uses them against her. 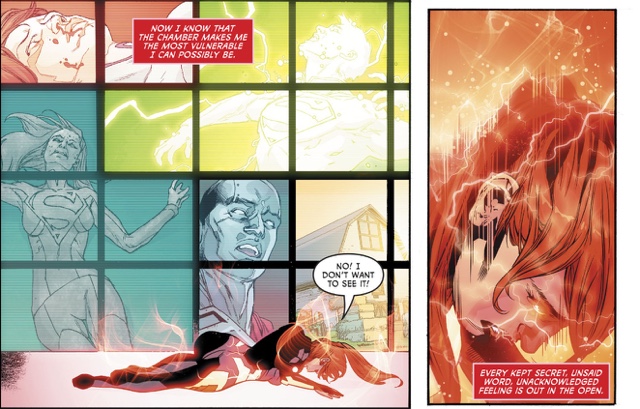 But Lana fights back, demonstrating powers she can access via the mech-suit. And in that moment of transcendence, she has a, likely final, vision of New 52 Superman, and finds peace. 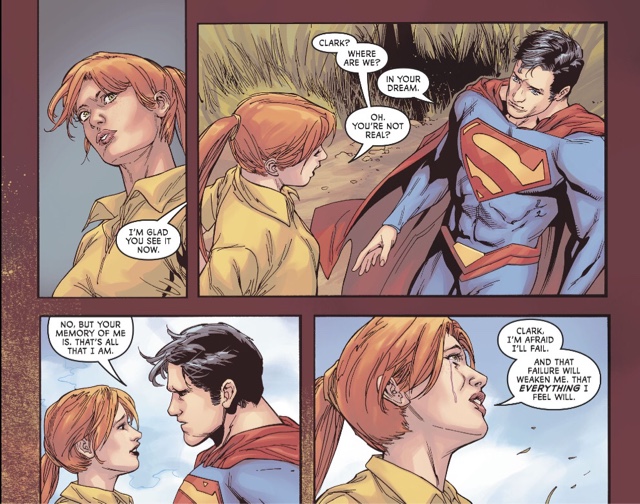 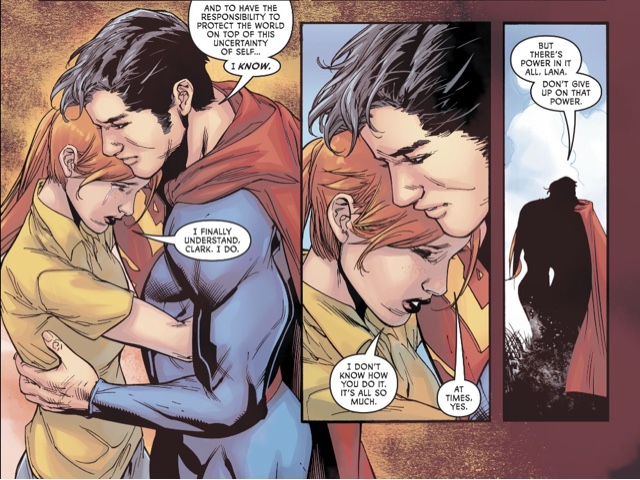 Flash forward to a few days ago and Lana, woken by bad dreams once more, hears a reference on the news that stirs her into action. 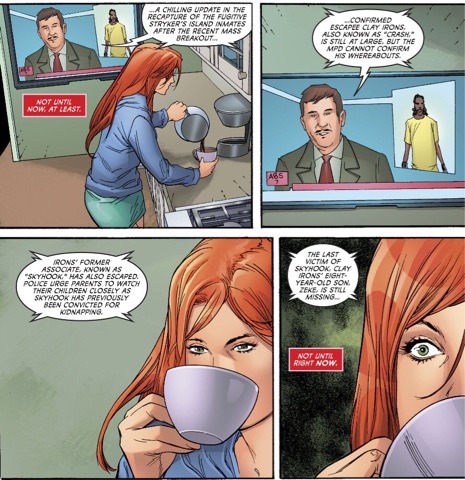 Today. Lana is fighting Skyhook. And she's not scared.
The final page is wonderful, but it's the final page so I won't spoil it. Suffice to say it's a logical culmination of the journey Lana goes on this issue. The quick-to-anger, even bitter, person of previous issues is gone; she owns those moments here, but has grown beyond them. She sees the good things she has in her life, and wants to protect them and help others less fortunate - the perfect attitude for a member of the Superman Family.
I had qualms with last issue, the first by new writer K Perkins, as it didn't get Lana out of the mood she'd been in for so long, but as I hoped, Perkins was edging towards Lana getting to a better place more organically. 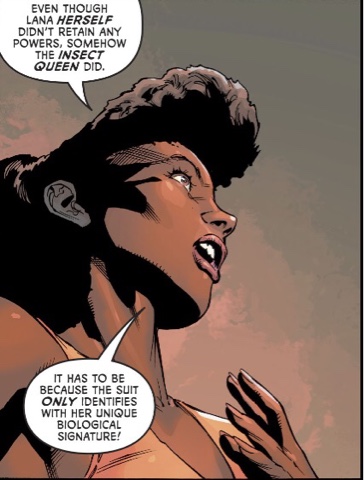 The power Maguffin is decidedly non-organic, but given Lana's closeness to Steel and Natasha, a technological way forward is reasonable. It's a shame, though, that Superwoman's new powers are so much boholden to her loved ones - the fantastic Ken Lashley/Hi-Fi cover art, recalling those inspirational posters of the Second World War, hints that Lana has a lot more agency in becoming Superwoman once more. Yes, she's flanked by Steel and Superman, but there she is, using her electrical engineering nous to forge a new path.
Ah well, at least we got a beaut of a cover.
The interior art by penciller Stephen Segovia and inker Art Thibert is pretty darn nice. I like the airier feel the book has these days; a less-intricate story means fewer tiny panels and I'm good with that - I still feel I'm getting value for money. 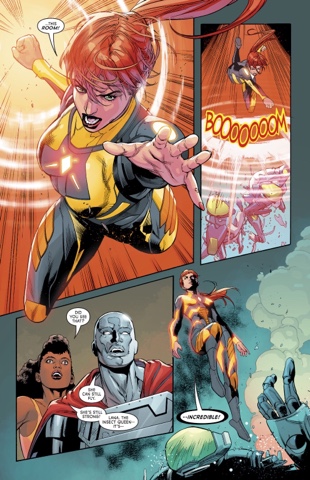 The action moments are a blast, but I get a surprising kick from well-drawn domestic scenes, such as dinner at Lana's, where the kitchen table is a flattened fried egg.
One thing I'm confused by is Lana's relationship with the wider Irons family. She's previously referred to Natasha as her niece, which isn't too puzzling as she's been with John Henry awhile - probably a year or so given the New 52 Superman's timeline - and they all live together, but here she speaks of Zeke as her nephew. The boy went missing when he was eight, we're told, which has to be several years ago, otherwise Steel and Natasha would be spending all their time and resources looking for him.
Have the events of Superman Reborn/DC Rebirth added several years to the Lana/John Henry relationship? It seems eminently possible given we know the JLA now debuted 15, not seven or so, years back... it's just a tad jarring that it seems to be a given.
Speaking of Lana's love life, I hope Perkins finds room for some downtime with Lana and John Henry, because they seem to have zero chemistry. Where is the love they speak of? Perkins, who has a knack for naturalistic dialogue, could do a fine job of showing us.
Another question: what are urban industrialists John Henry and Natasha even doing living in Smallville? Are they not bored? The Ironworks is in Metropolis, does Kansas have a bullet train too?
I have to say, despite reigniting powers in Lana, I'm appalled by the Irons submitting Lana to the 'deprivation chamber', which manages to read minds, emotional state... and manifest killer robots. Maybe a spot of beta testing next time?
Colour house Hi-Fi excel whenever they're asked to represent unearthly energy, whether it's Lana's re-emerging super-stuff or the Irons' mad science, but the team members are great at naturalism too, as shown by Lana's farm-set vision. And letterer Josh Reed deploys an attractive range of fonts throughout that complement the art. 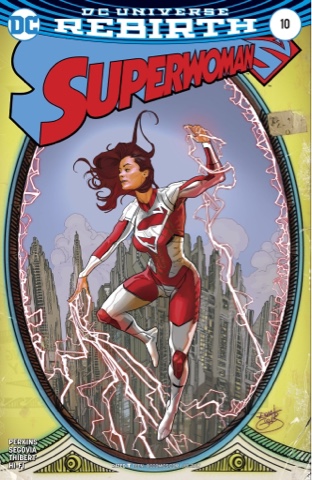