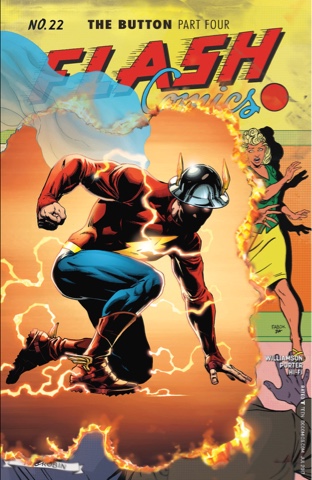 It's a race against time as the Flash and Batman bid to solve the mystery of the smiley face button which appeared in the Batcave. Using a Cosmic Treadmill to traverse the timestream, they've encountered the ever-evil Reverse-Flash. Last time they saw him, a few minutes ago in their personal perception of time, he was dead, but they're in a dimension of time, so of course he's around.
He has the smiley badge - excuse me, I'm moving to UK parlance as a 'button' is something which fastens things, not something you pin to your lapel - and is determined to outrace the heroes. Professor Zoom isn't fully focused, finding time to make threats against Barry, even as blue-tinged lightning bolts barely miss his speeding form. 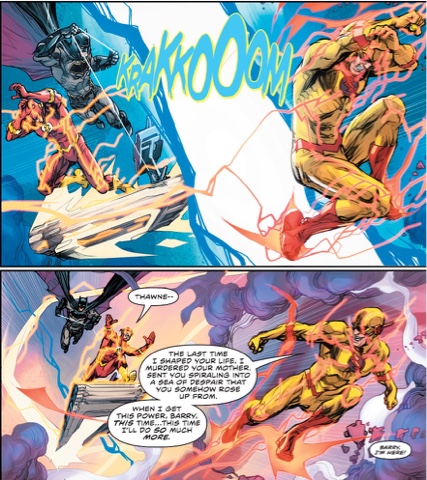 Soon, though, he's toast. It's no surprise to Barry and Bruce, but what is, is the mystery man who appears from nowhere. 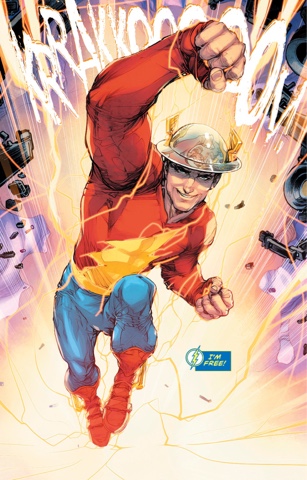 The treadmill having been destroyed, he helps them find their way home. Barry doesn't immediately recall original Flash Jay Garrick the way he did Wally West when he appeared before him, and neither does Batman know him. Jay isn't around long enough to fill them in.
Barry and Bruce visit the graves of the latter's parents and ponder the things they've seen. With Zoom dead, Jay gone, the badge lost in the timestream and the treadmill kaput, they've hit a dead end. 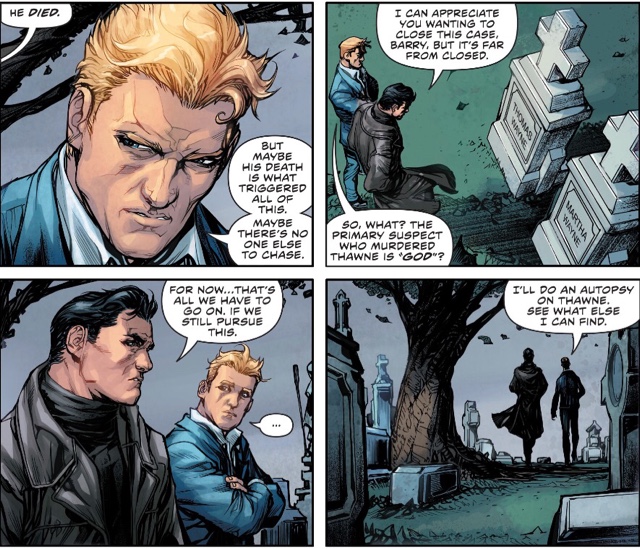 But the investigation will continue.
Later, Bruce Wayne seems to be falling in with the last request of the living Thomas Wayne he met on his journey, to give up being Batman. 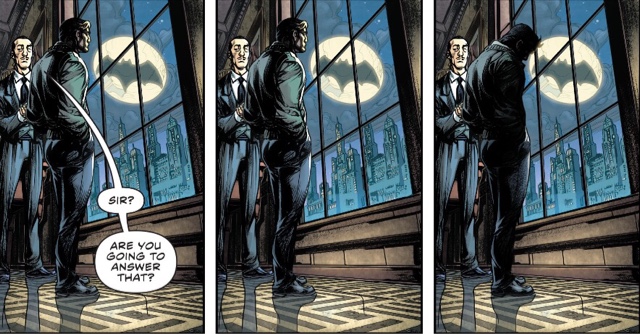 The story's final pages tie directly in with a certain maxi-series from the Eighties.
And an epilogue uses colour very effectively to set up the next chapter of the Rebirth mystery, Doomsday Clock, which is coming in November.
November. Blimey, that's a long way off for those of us who don't have a cosmic perception of time. At this point Barry and Bruce - and friends Clark and Wally - have enough evidence to justify a massive war council of heroes on the nearest satellite. But rather than taking the fight to whoever is manipulating reality, they're hanging fire, perhaps because they intuit that they really are ants on a god's farm, or because said deity - now confirmed to readers as Dr Manhattan - is interfering with their free will. Or are they biding their time until they know for certain they can avoid deadly blasts of blue lightning? Hopefully a few more clues will drip out before the autumn; heck, I'm itching to know what's up with Saturn Girl in Arkham Asylum, why isn't she using her mental powers to progress whatever her mission is?
Joshua Williamson, who developed the story with Geoff Johns and Tom King, is on a treadmill of his own. He can't progress the overall story too much but needs to give the reader enough to feel satisfied. And so far as I'm concerned, he succeeds - as a nugget of the DC Rebirth event, this is very good; sure, I'd love the book to have wound up with the return of the classic Justice Society of America and Legion of Super-Heroes, but they're likely being saved for the big finale. 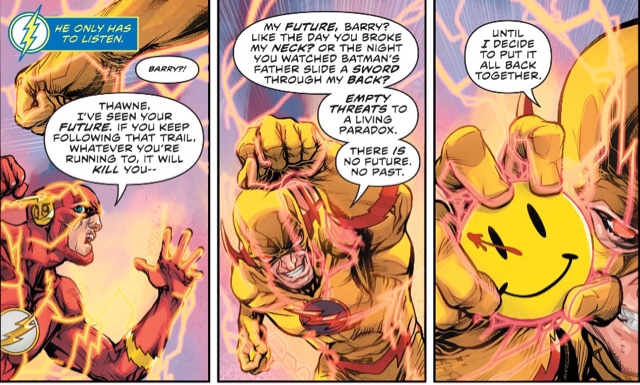 For now, I'm happy with such things as the references to the Death of Iris Allen/Trial of the Flash storyline, even if, to current Barry, that was an alternate life - I suspect that by the end of the big story it'll all be Superman Rebirthed into his canonical past. The action here is compelling, the dialogue sharp - it's very good work.
The illustrations of Howard Porter really sell the drama - they're meaty, detailed and just darned exciting throughout. He captures the madness of Professor Zoom, the danger of the time dimension, the desperation of our heroes and the charm of Jay Garrick. And when he's required to go into Watchmen mode, aided by the talents of the droids at Hi-Fi, Porter nails it. The arrival of the Golden Age Flash provides the blast of optimism such a character should, there just something about a grinning guy in a shiny winged helmet. 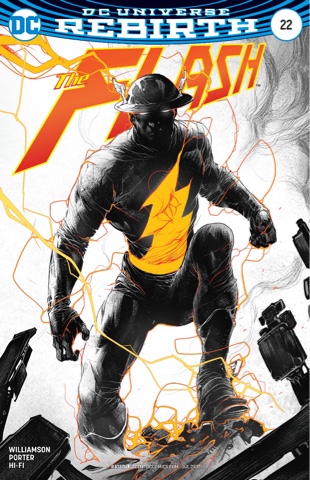 Jay also appears on the beautiful Flash Comics #1 cover homage by Jason Fabok - who handled the Batman half of this four-part crossover - and colourist Brad Anderson. He's also on the variant by Porter and Hi-Fi, which takes a different artistic approach to the interior style, and looks differently amazing - Dr Manhattan may have evolved to the state of creating life, but this is a guy worthy of the helmet of Mercury.
So that's The Badge. Sorry, The Button. Four issues of great-looking, massively intriguing DC continuity fun. Please sir, may I have some more?
Brad Anderson Geoff Johns Hi-Fi Howard Porter Jason Fabok Josh Williamson Steve Wands The Flash #22 review Tom King