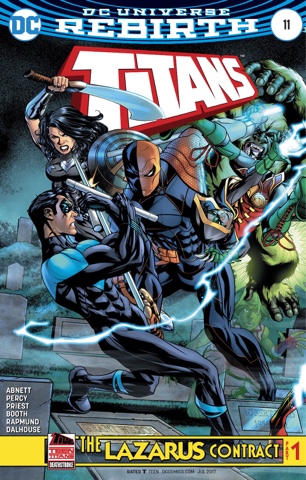 Years ago, young supervillain Grant Wilson, the Ravager, died while operating as an agent of the HIVE. His father Slade, aka Deathstroke the Terminator, blamed the Titans, who were fighting Grant at the time.
Today, the Titans are again fighting HIVE operatives.

At least they think they are. It turns out they're imposters, hired to, apparently, distract the Titans. 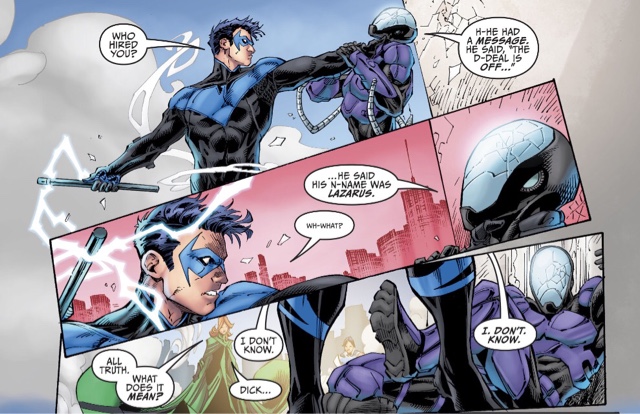 Lilith recognises that Dick responds to the name 'Lazarus' - well, she's known him for years, and is a powerful telepath.
Then a more immediate question is raised. 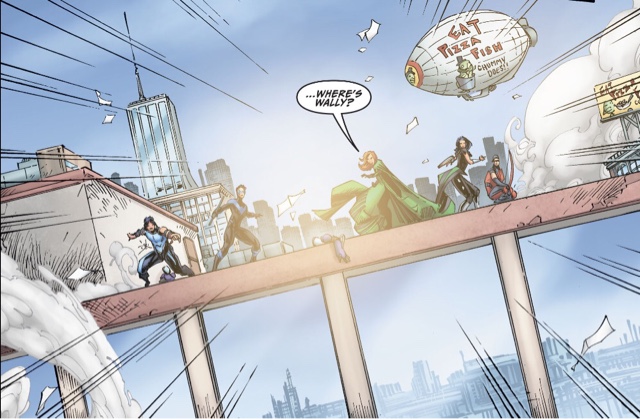 The answer is, points unknown, tethered to a cosmic treadmill and unable to resist answering his unseen captor's questions. 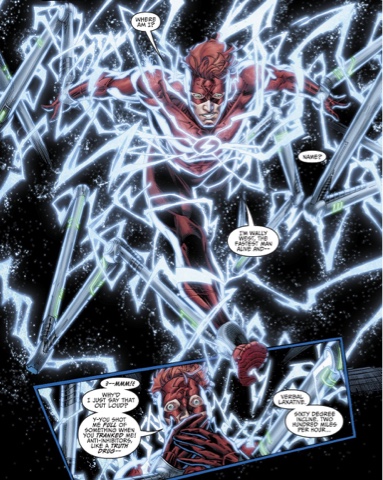 At Titans Tower, his teammates try to locate Wally, with Aqualad voicing the possibility no one wants to face 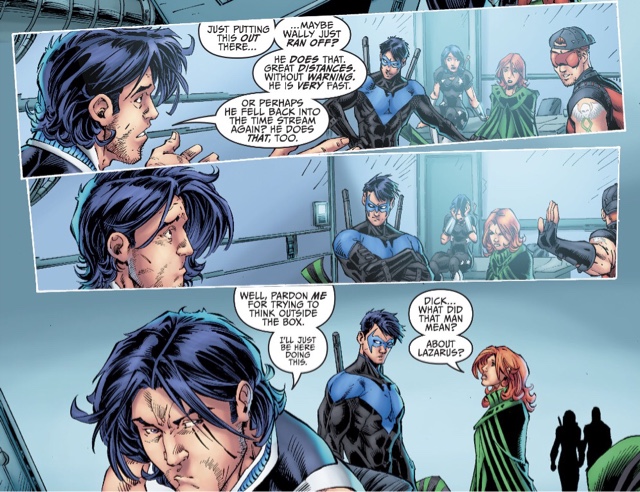 Lilith makes an attempt to get Dick to address the Lazarus question, and comes to a grave conclusion.
The mystery voice turns out to be Deathstroke, who has an offer for Wally... 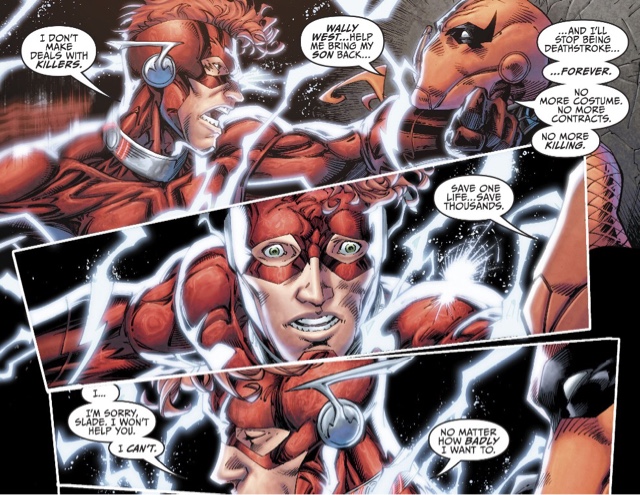 This is the first part of a crossover with sister book Teen Titans and, unsurprisingly, Deathstroke and it's a thoroughly entertaining beginning. The opening flashback tweaks the original New Teen Titans tale for a post-Rebirth world, deleting Raven, Starfire, Changeling and Cyborg and plugging in Aqualad, Speedy and Lilith. Ravager's costume is a tad different, shinier, and the setting moves to the original Teen Titans town of Hatton Corners, but it's basically the same deal.
Writer Dan Abnett plots with his Titans and Deathstroke oppos Ben Percy and Christopher Priest, and the set-up certainly intrigues. Abnett's dialogue zings throughout, with my favourite moments including Tempest's entirely reasonable idea that Wally might be awash in the timestream once more, and Deathstroke almost using the phrase 'verbal diarrhoea' (the unguarded Wally going into the intro line Mark Waid would give him in every issue of his own series is a fun touch). And how much must Abnett have loved getting 'Where's Wally?' in there? Come back next month for 'Tempest in a teacup...'
Penciller Brett Booth is making this series his own, with strong storytelling throughout coupled with nice facial 'acting' - a hospital scene with Slade and aide Wintergreen speaks volumes for both their characters, while Grant's death is genuinely moving. 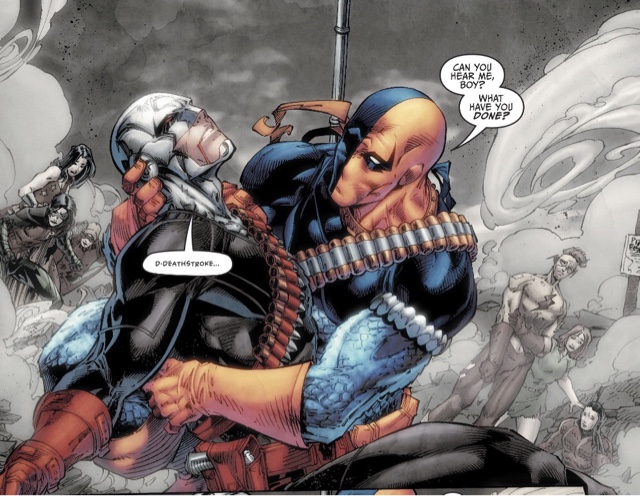 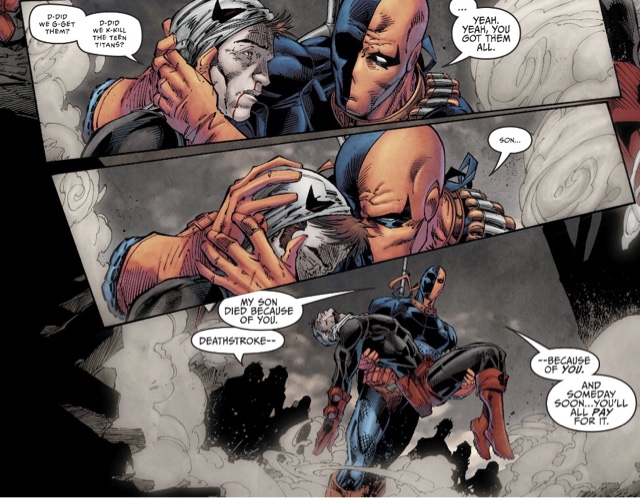 Then there's that corker of a fight scene with the Not-HIVE, and Wally's run-in (sorry!) with Slade, which crackles with tension. I dislike the amount of electricity around Flashes these days, but at least here there's a story purpose. Inked by Norm Rapmund and coloured by Andrew Dalhouse and Carrie Strachan, this is a book that blazes with dramatic visuals. The flashback colouring is especially strong. Credit, too, to Josh Reed, whose lettering is ever clear and punchy.
I don't know whether it's Booth, Rapmund or even Dalhouse who's dotting the book with references to 'pizza fish' but an IV drip isn't the place, it distracts from the story a wee bit. 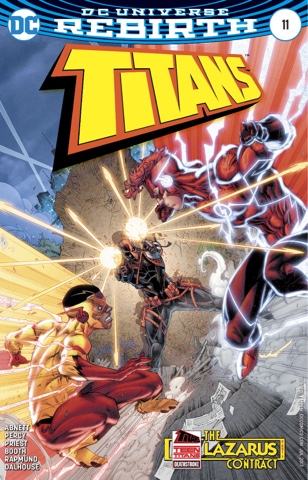 Both covers are tip-top, with onetime Titans artist Mike McKone, coloured by Alex Sinclair, making a welcome return to the concept, and Booth, Rapmund and Dalhouse absolutely killing on the variant.
Crossover title the Lazarus Contract, with its deliberate invocation of the classic Wolfman/Perez Judas Contract, gives itself a high bar to leap, but if the rest of the story builds on this strong foundation, it may just get there.
**** 8/10
Alex Sinclair Andrew Dalhouse Ben Percy Brett Booth Christopher Priest Dan Abnett Josh Reed Mike McKone Norm Rapmund Titans #11 review