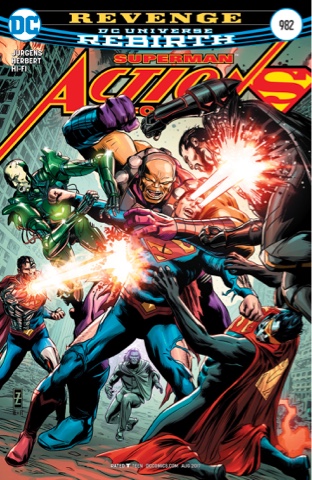 Blinded by Phantom Zone energy, Superman has retreated to his Fortress of Solitude for tests, and with a slew of his greatest enemies on the loose, he's taken Lois and Jon there for protection.
It's a sensible plan - his Arctic retreat houses some of the best defensive measures on the planet, where better to regroup, recover and plan?
Sadly, it's that very treasure house nature that makes the stronghold so attractive to General Zod, Blanque, the Eradicator, Mongul, Metallo and their - he hopes - leader Cyborg Superman. 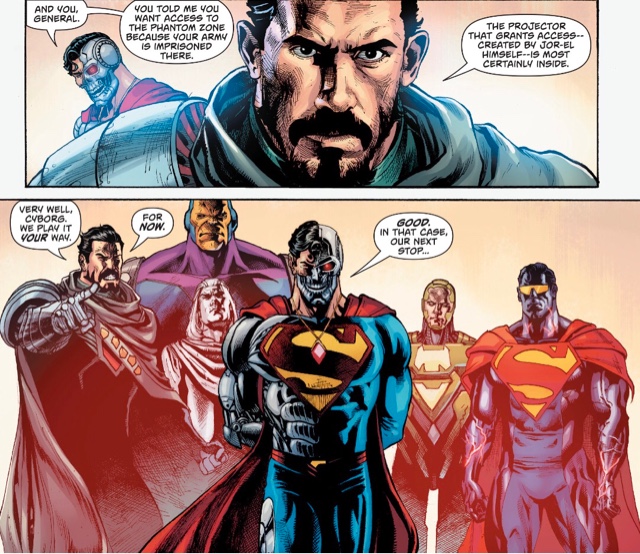 So when their foes come a-calling, just as Superman looked set to send for Justice League back-up, the Kents have to think fast...
Scenes of the Fortress of Solitude under siege bring back memories of the era-ending Whatever Happened to the Man of Tomorrow tale from the Eighties - 399 issues ago, hmm - but somehow I think this story will have less drastic consequences. Revenge Part Four is that rare thing, a middle chapter that manages to be exciting from start to finish. The tension between the bad guys - well, Zod and everybody else, basically - is lots of fun, while the matter-of-factness of Clark, Lois and Jon is good to see... there's no hysteria, more stoic resignation.
Well, except with Jon, he's having fun playing tour guide for Krypto. 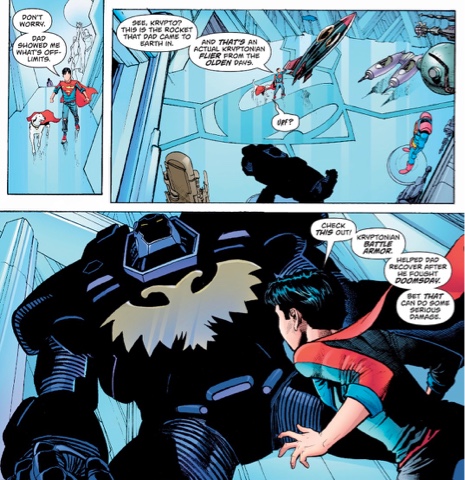 It's a sweet character moment for the new Boy of Steel, one of several standout scenes this issue. These definitely include the sightless Superman's gutsy attack on half a dozen of his most fearsome foes. The worst of them is Zod, who wants to take his decades-long anger at rival Jor-El out on his son... and possibly grandson.
Which isn't to say writer Dan Jurgens didn't make me laugh with this little Zod moment. 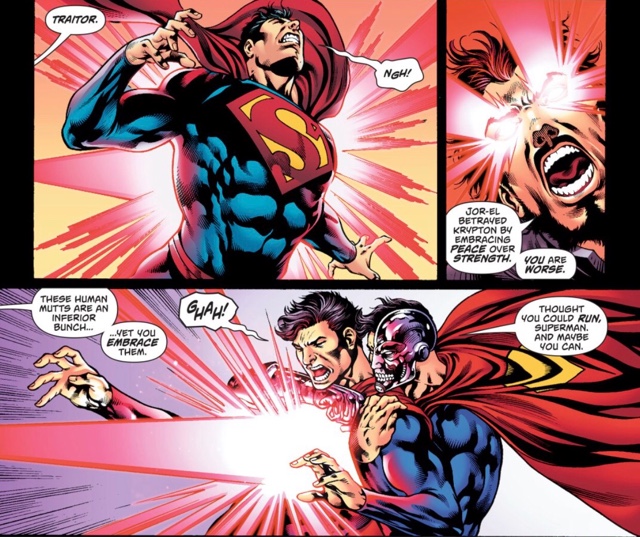 'Human mutts'? Heel before Zod!
And yes, Zod does get his catchphrase in... the guy really needs some new material.
The material on his current outfit, though, is terrific. I love this costume, I think it's regular Action artist Patch Zircher's tweak on a Jim Lee design, with Zod like a Kryptonian Samurai who's seen too many spaghetti Westerns - dig that poncho! 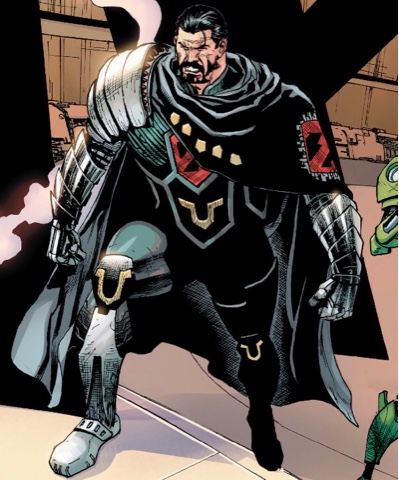 The pencils this time are shared between Jack Herbert and José Luís, both of whom excel in terms of storytelling. The 'camera' angles, the character work, the fight scene, all look superb. The arrival of the Revenge Squad at the Fortress is especially good, twice over: first we get the scene projected onto the screen-head of Superman's janitor robot, Kelex... 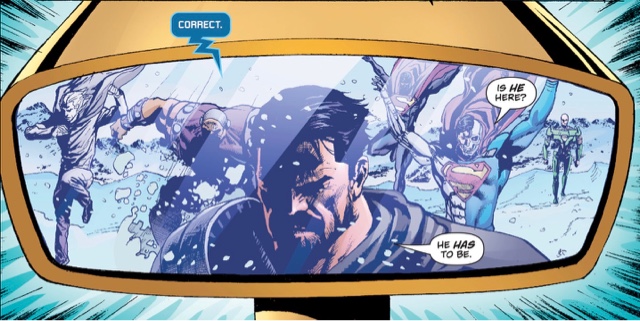 ... and then a close-up with a terrifyingly leering Zod to the fore.

I think both images are the work of Herbert, inking himself. Luís, partnered with Ray McCarthy, is responsible for one of my other favourite panels, a changing-to-Supergirl shot that screams 'instant classic'. 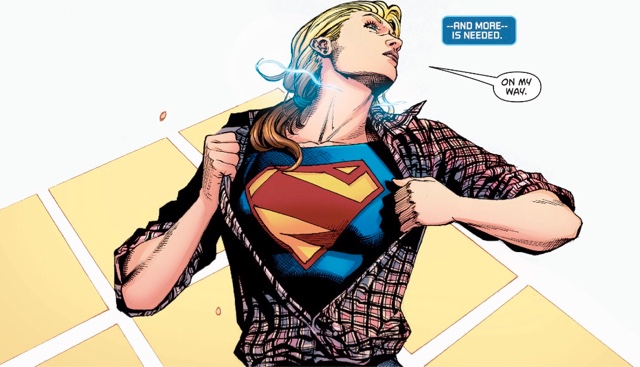 Supergirl? Yep, he may not get the League to show up, but Superman does call in some heavy hitters close to home, and the final page splash of them arriving is glorious. I think that's Luís and McCarthy again - I'm trying to find out for sure. All the artwork is beautifully coloured by Hi-Fi, while Rob Leigh is, as ever, the Lord of Letters. 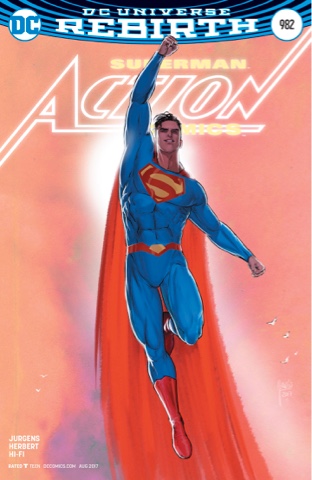 Hi-Fi also colours the cover by Zircher, who gives us a composition featuring Superman and all six baddies which manages to have dynamism and depth alike - it's elegant work. Gary Frank isn't around for the variant this time, but I'm never going to complain about a Mikel Janín illo... is it me, or is there a bit of current TV Superman Tyler Hoechlin in there?
With a terrifically structured and executed script by Jurgens - did I mention there's a very mysterious moment during Jon's tour? - and drop-dead gorgeous art by Herbert, Luís and co, this is a thrilling diversion for fans of Clark, Lois, Jon and Krypto.
Action Comics #982 review Dan Jurgens Hi-Fi Jack Herbert José Luís Mikel Janín Ray McCarthy Rob Leigh Superman