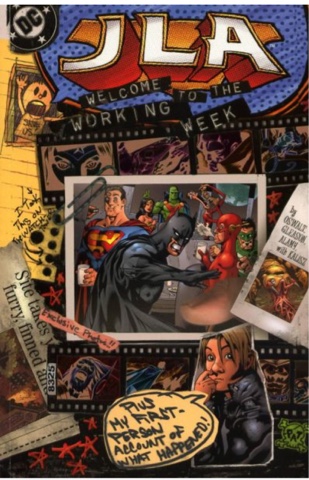 After Grant Morrison and Howard Porter's back to basics JLA exploded in popularity, DC understandably rushed out the mini-series and specials. This one I remember being announced, but as its main selling-point seemed to be that it was written by someone who worked on blah sitcom The King of Queens, I never bothered picking it up. Besides, its central conceit of an ordinary guy secretly observing the heroes in downtime sounded like another take on the Giffen/DeMatteis Justice League, and I doubted anyone could come close to the genius of that series.
Fourteen years on, Paul Hix, of the excellent Waiting For Doom podcast, mentions it as a favourite, and I head to eBay. On the book's arrival, first impressions aren't good; penciller Patrick Gleason and inker Christian Alamy's cover is an unattractive collage-type package. I see what it's going for - a chaotic Life in the Day idea - but it's too cluttered and murky for me. 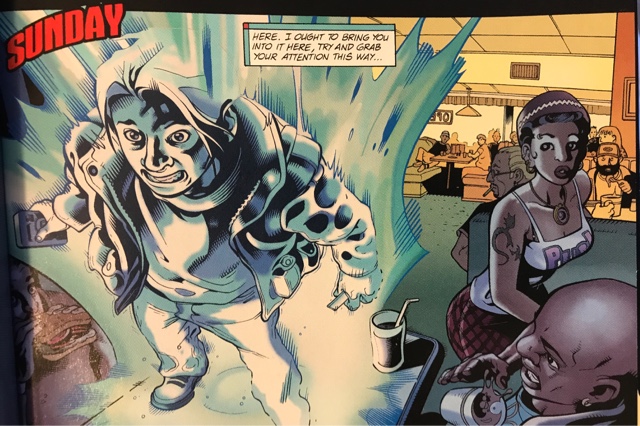 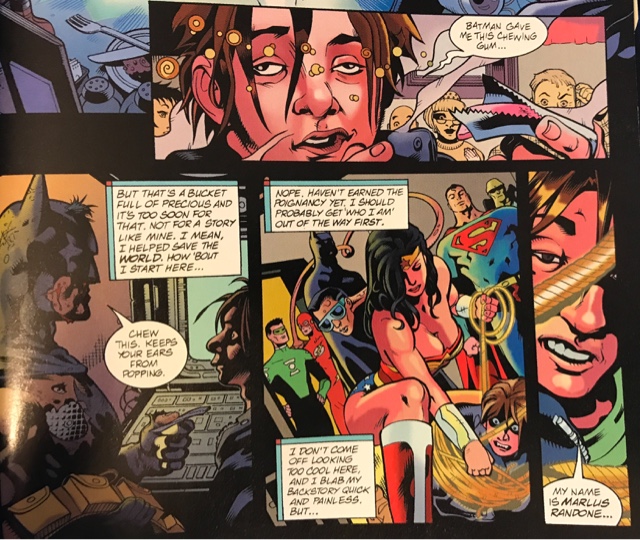 The first page of the story itself is annoyingly self-conscious, as the narrator decides on the best place to start - but it makes logical sense, our observer is a journalist. Plus, we get flash forwards which gain significance later.
The narrator is named Marlus Randone... Marlus? That has to be a nod to someone known to writer Patton Oswalt but it's a distractingly unusual name. The young writer/publisher of a magazine which takes a sceptical look at superheroes, he's been beamed up to the JLA Watchtower with his entire community when an asteroid attack brings angry alien creatures to town. This proves a chance to see the heroes up close, how they operate. 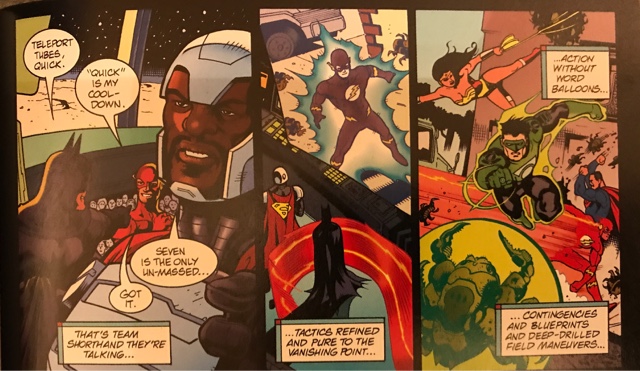 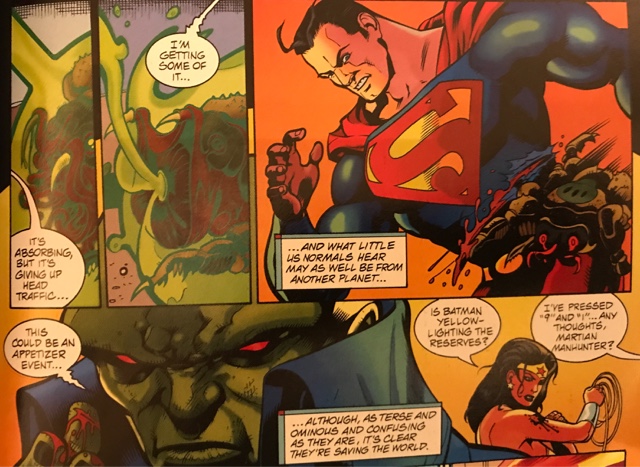 Crisis over, everyone is teleported back to Earth. Well, almost everyone. Somehow, Marlus gets left behind. He knows he'll soon be discovered, but decides to stay hidden as long as he can, get material for his mag. Somehow, he manages seven days on the satellite, sneaking a look at the monitor screens, and occasionally getting a close-up look at the heroes and visitors. Some of the scenes he witnesses are pretty surprising, from Wonder Woman training... 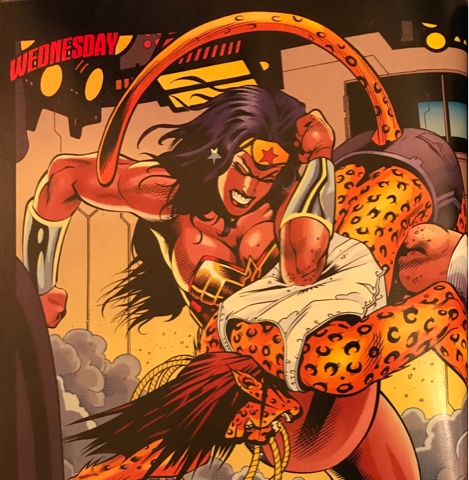 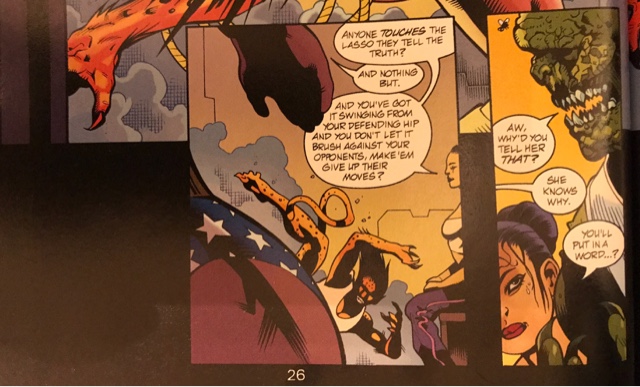 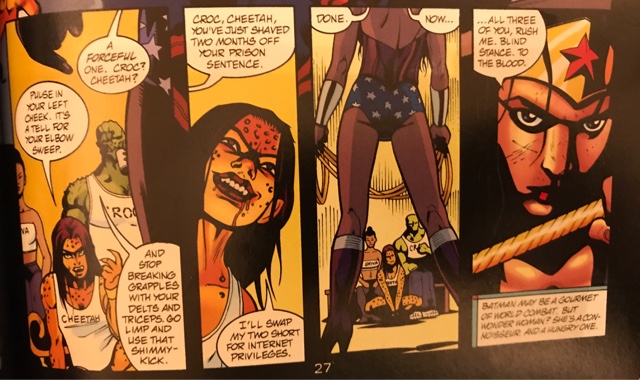 ... to Batman making a super villain rethink his ways... 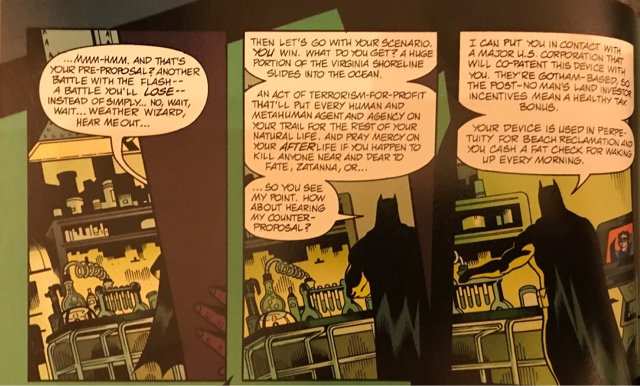 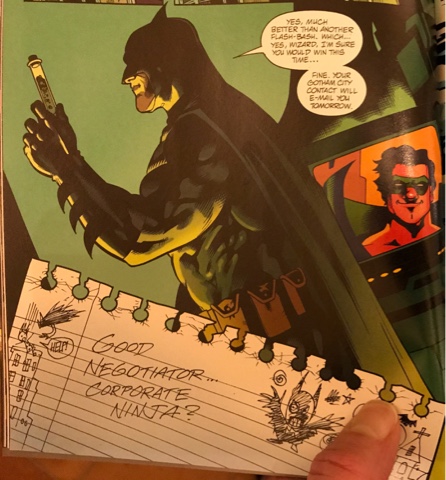 ... and Martian Manhunter mocking one of Batman's obsessions. 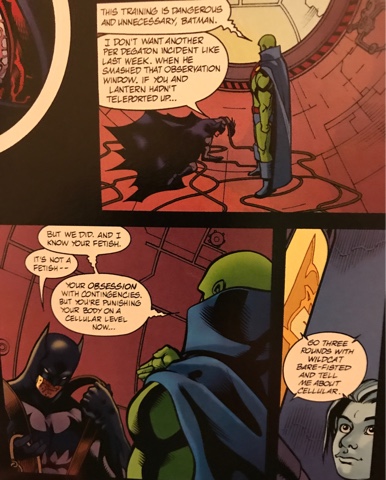 Eventually, a big crisis sees Marlus decide to make himself known.
I like this a lot. At 68 pages, it's too long, leaving room for scenes such as a headscratcher of a party apparently organised by Plastic Man. Oswalt's pop culture namedrops (Tamyra? Jeff Spicoli?) would have been lost on me even in 2003. And the drug references are simply tiresome.
But there are tons of great ideas here, such as Diana having time taken off baddies' sentences in return for training her, and Oswalt anticipating racebending on superhero TV shows. Yes, Batman's negotiation with Weather Wizard isn't something that should appear in a comic because logically, it opens a door that would cause a superhero universe to unravel. It begs the question, why hasn't Batman similarly persuaded half the villains in the DCU to sell their patents rather than invest in robbery?
But this is a special outside the regular line, and heck, it's fun to finally see a question we've all asked about villains who invent potentially lucrative tech addressed.
Oswalt's story turns out to be bigger, more clever than it at first seems - by the end, after the debut of bad guys it's a shame we've never seen again (I can see exactly why a Doom Patrol booster would like 'em), cynicism has ceded to heart.
As for the art by Gleason, Alamy and colourist John Kalisz, it's extremely likeable. They essay the action, nail the humour and boy, do they work hard - there must be hundreds of characters in this comic. The storytelling is great throughout, with the final two pages - the emotional climax - just beautiful. And a nod, too, to the always excellent letters of Ken Lopez.
So, thank you Paul Hix for putting me onto this Justice League graphic novel. It's a fascinating snapshot of a place and time in DC history, and a story that rewards reading today.
Christian Alamy John Kalisz Ken Lopez Patrick Gleason Patton Oswalt Retro Review - JLA: Welcome to the Working Week