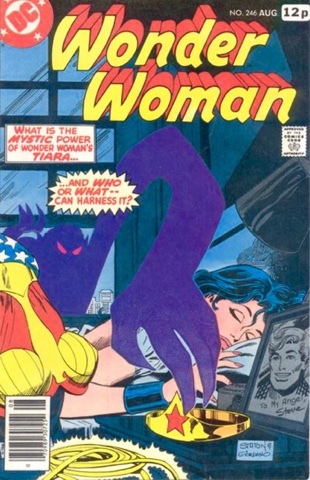 It's 1978 and Diana Prince is battling an especially stubborn foe - stains. 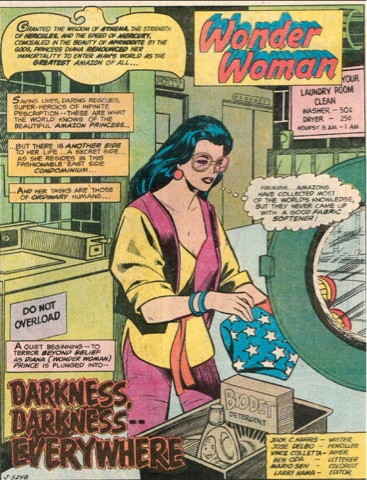 And while she's not on superheroine duty, Diana does have her trusty tool handy. 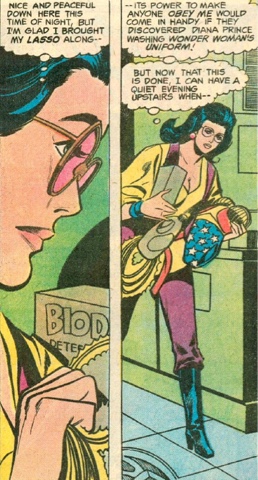 Then, her quiet evening takes a turn towards adventure, as a blackout traps a pair of neighbours in the elevator, forcing Diana to rescue them in costume. 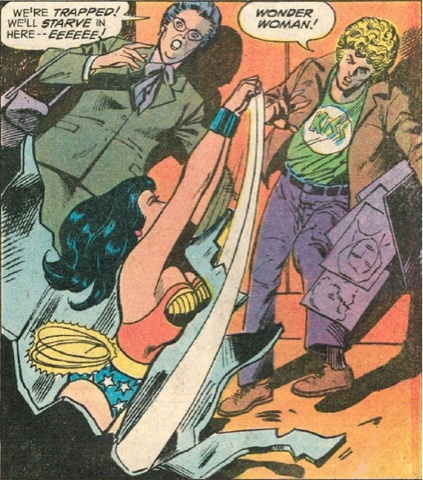 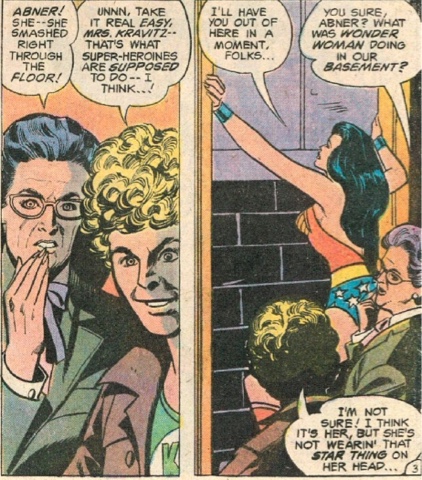 Or at least most of her costume. 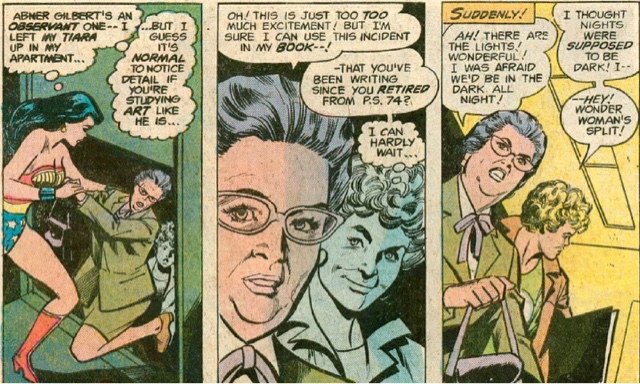 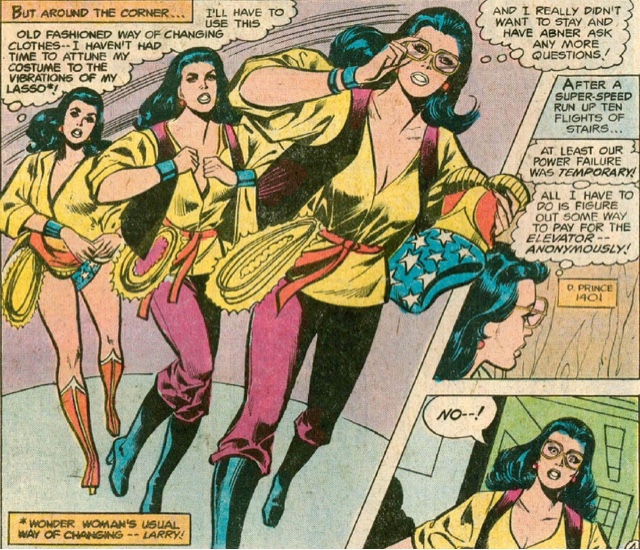 Changing back into her civvies, Diana discovers there's been an intruder in her apartment.  She soon finds out what's missing. 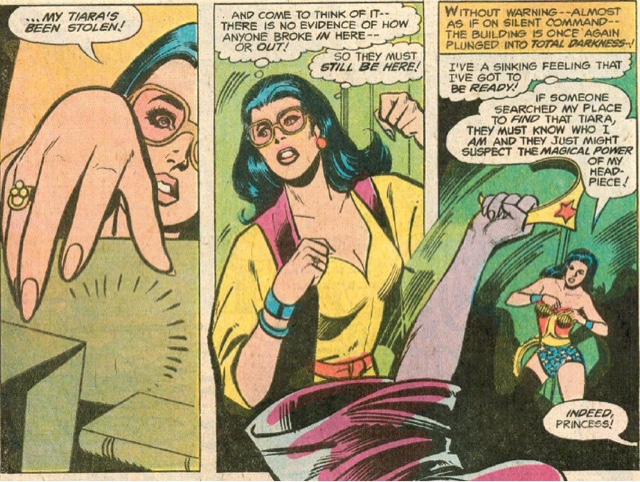 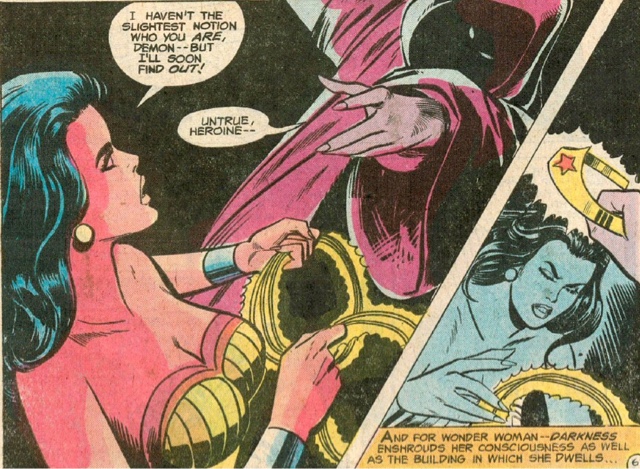 She wakes to a more familiar, welcome figure.

They're soon surrounded, first by neighbours, then by something even weirder. 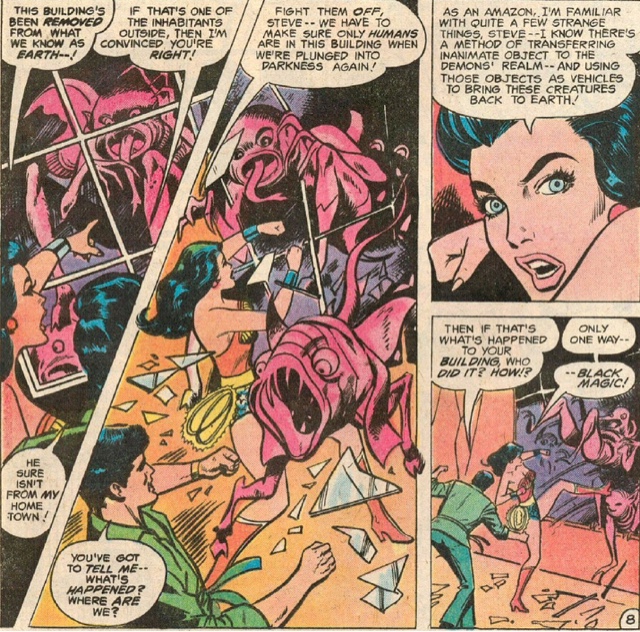 Wonder Woman and Steve make a terrific team, and soon they're out exploring the dark dimension. 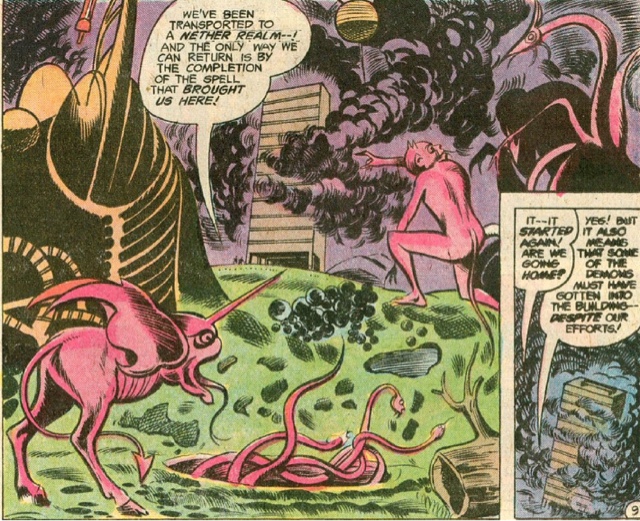 The neighbours are revolting, including, it seems, a party of swingers...

Diana acts to remove the magical smoke that flipped her apartment building from Earth to who knows where. 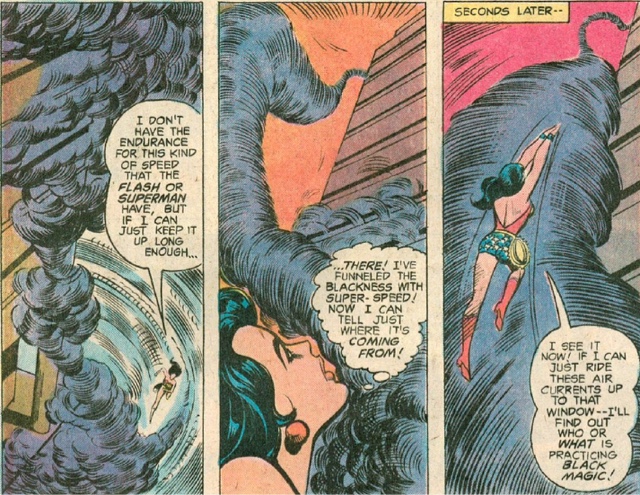 And then, a second encounter with the purple-robed figure - who now shows her face and explains why she stole Diana's heroine headwear. 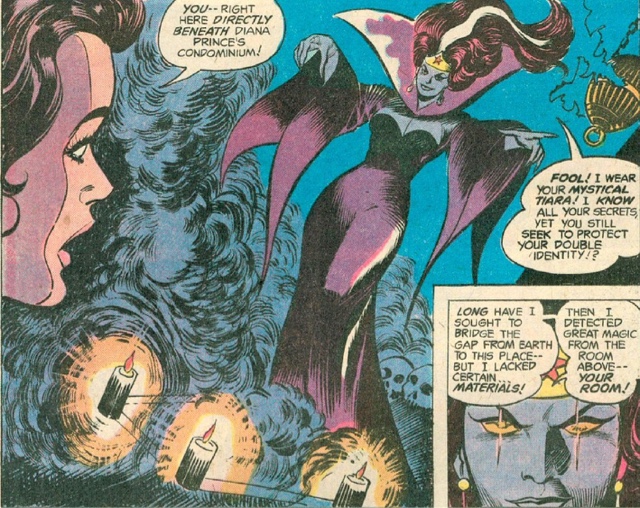 Then, we meet another tenant of Diana's building. 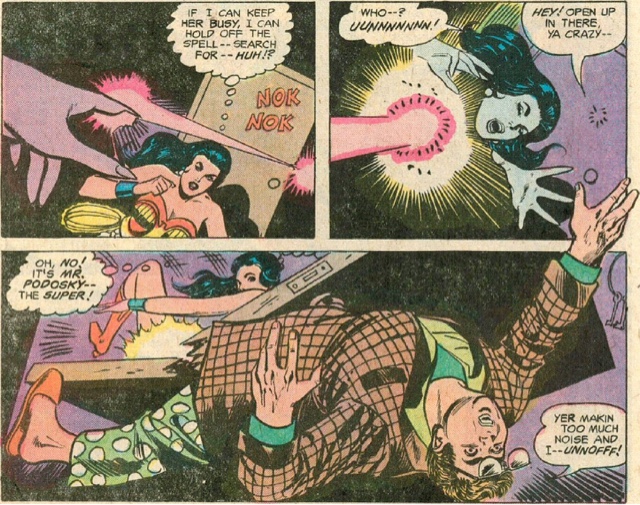 Oops. Realising she needs magical light in order to see the demons trying to get to Earth, Diana generates some - with her bracelets. 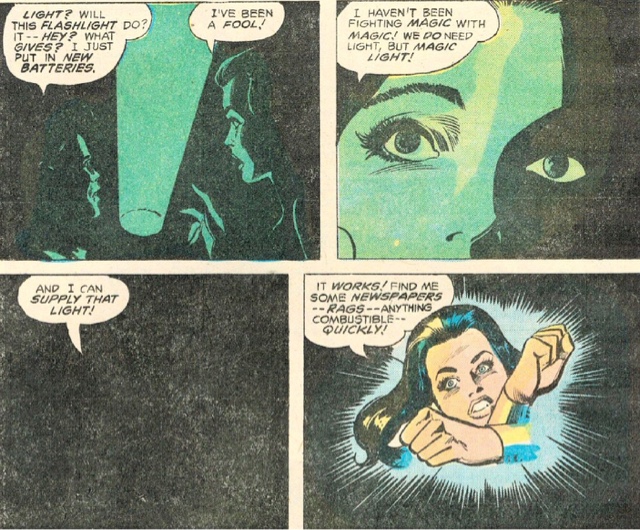 And what she sees is pretty disturbing. 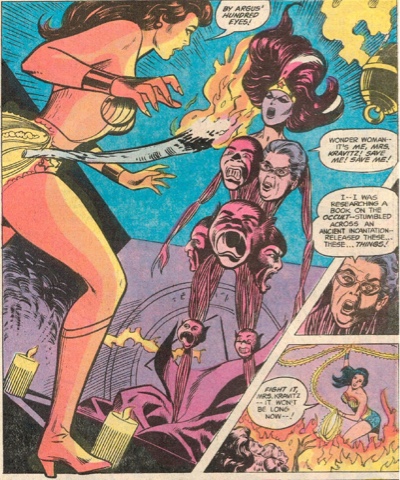 Can the magic lasso bring sanity to the situation? 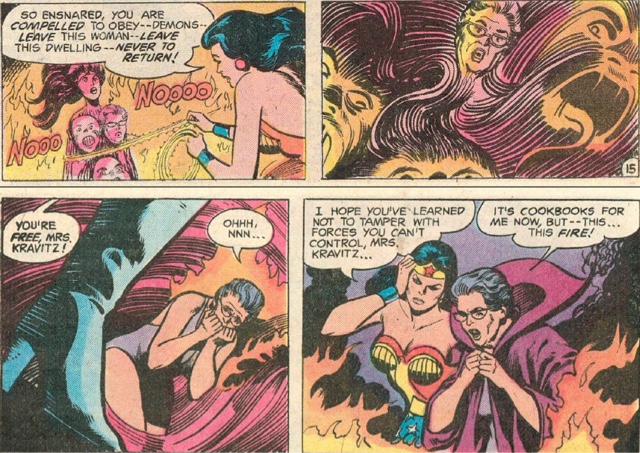 Baddies banished, Diana and Steve have a chance to catch some downtime - but new drama lies on the horizon. 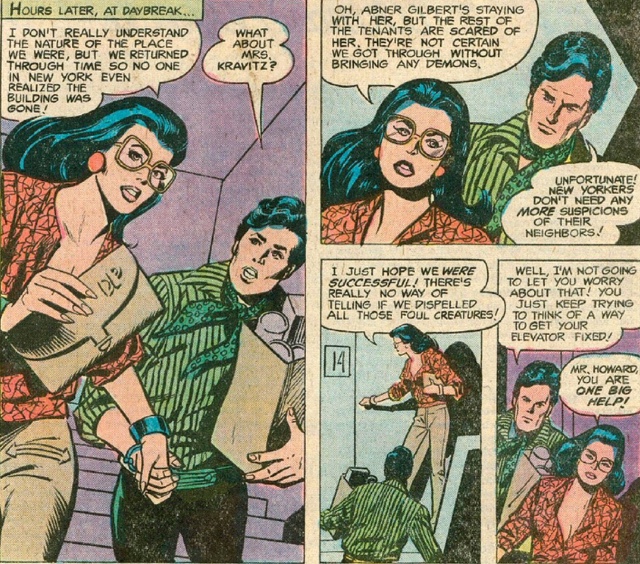 Yipes, what could be coming? Why don't I remember Inversion, the Inside-Out Man, I was reading every issue of Wonder Woman? I remember this one well, with one daft reason being that it taught me the word 'condominium'.
The better reason to remember this is that it's a wonderful one-off from writer Jack C Harris, penciller Jose Delbo and inker Vince Colletta. There's drama, humour and a rare look into Diana's home life. So far as I remember, this is the first time we met her neighbours, and as a fan of the old Private Life of Clark Kent shorts, which featured the likes of the Marigold Twins and Mrs Goldstein, it was fun to see Diana's equivalents.
I wonder if Mrs Kravitz and Abner are nods to the Kravitzes from Bewitched? Mind, the antics in this issue are less Samantha and Darrin than Rosemary's Baby... here are some seriously creepy goings on. The reveal of the demons, for example, is not what I'd expect in a Comic Code-approved book of the mid-Seventies, especially given the cuteness of the earlier imps.
Harris, a familiar name in the DC credits of the era, seems to be having a great time, giving us a fast-paced fantasy tale. I especially like that he doesn't undersell the action Man abilities of Steve Trevor... what's that, asks a younger reader I'm making up, isn't this guy called Steve Howard? Doesn't Steve Trevor have blond hair? Long story, but it's the same fella. What was really interesting to me was that Steve knew Diana's real identity at this time, and they were apparently very intimate... I wish this situation had gone on awhile longer, but sadly, it wasn't to be.
I smiled at the line, 'in the hallway, havoc' - it sounds like a Stan Lee Fantastic Four story title. And that reference to New York's Seventies blackouts made this feel very Now back Then.
In my memory, Jose Delbo's art was workmanlike, remarkable mainly for Diana's extremely ovoid head, but I love it here. His clear compositions suit the breakneck pace of Harris' script, and he conjures up a good range of character types. That comedy beat with the super works brilliantly, the two scenes of Diana changing are differently dynamic and he really sells the idea that Steve is concerned as Diana awakens. 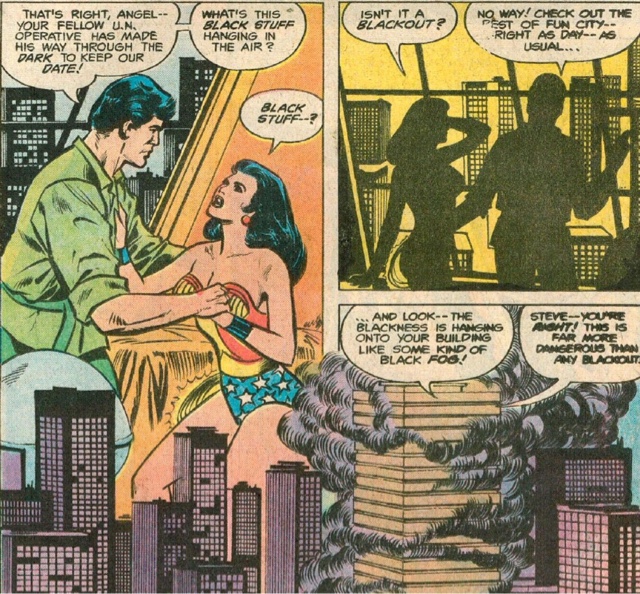 That last one appears on my favourite page of the issue - the sleep-to-waking images of Steve are followed by a lovely two-shot of heroine and hero, a terrific silhouette panel that totally serves the script, and an exterior view of the apartment building whose lack of borders make it feel that something malevolent is breaking free.
The reveal of the she-demon in the tiara is excellent too, and that close-up of her face - that's intense.
It's fun to look back at how the stylish ladies of the States dressed in the Seventies - given how behind the times Steve's get-up is, though (I don't think anyone this side of Fred Jones has worn a cravat since 1972), I probably should not assume this is fashion gospel. I wonder, though, why Delbo twice gives us ladies of a certain age in underwear... why is Mrs Kravitz in a one-piece? Why show the woman I joked was a swinger in her skimpies? If Mr Delbo, who's now in his Eighties, is reading this, do tell us; more importantly though, thank you for years of fun comic work.
Colletta's inks suit the story, dripping with darkness, while colourist Mario Sen shows real sensitivity to the material, with evocative tones and smart lighting choices. Mind, he might have come up with some other colour for the baddie's robes than the DC default of purple, which has generations of fans thinking Time Trapper. And DC stalwart Ben Oda's letters have all the oomph the story needs.
The cover is by penciller Joe Staton and inker Dick Giordano, and it's one that's stuck with me down the years - it's so darn unusual. Sleeping heroine, Ditko-esque demon, a contrast of light and dark that really pops... I love it.
And that's my reaction to Darkness, Darkness Everywhere - it's a 17-page gem from the days when Diana didn't need a massive great sword to save the day - just courage, her lasso and imaginative creators.
Jose Delbo Mario Sen Retro Review: Wonder Woman #246 (1978) Jack C Harris Vince Coletta