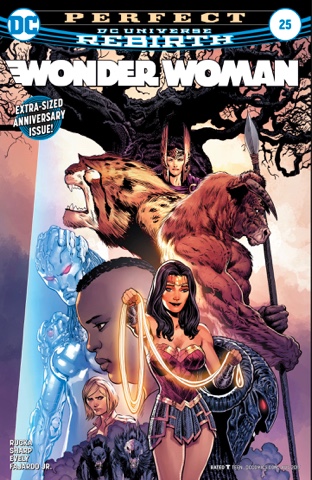 How many reviews of Wonder Woman have I begun now with, 'I'm going to give Wonder Woman another try?'
Well, it's anniversary time, the alternating Lies and Truth stories are over and it's the end of Greg Rucka's run... how could this issue not be interesting?

It gets off to a terrific start with Diana truly impressive, though strangely guarded, as she proves the MVP in a Justice League battle against Shaggy Man. And it's all downhill from there. There's a military intelligence scene with Sasha Bordeaux miserable and forgetful about something - Wikipedia hints that she was possessed by Dr Cyber - and the butchest Etta Candy ever apparently wanting to distance herself from Diana.

Veronica Cale has an interview with the FBI which no one gets anything out of, especially me... it's basically two slow, wasted pages. Then Diana visits Veronica, and she doesn't get Veronica to help either. 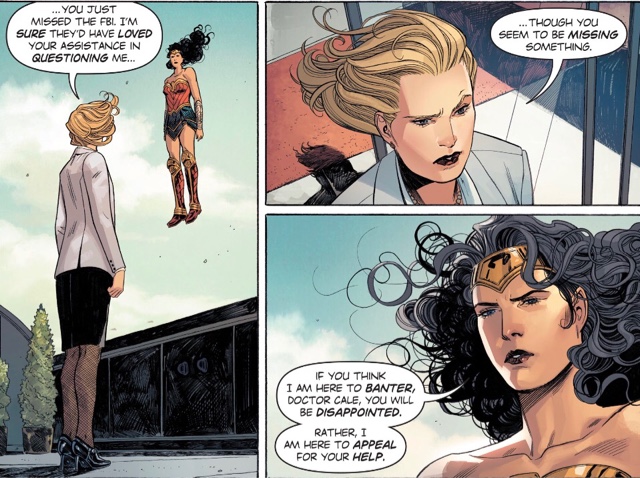 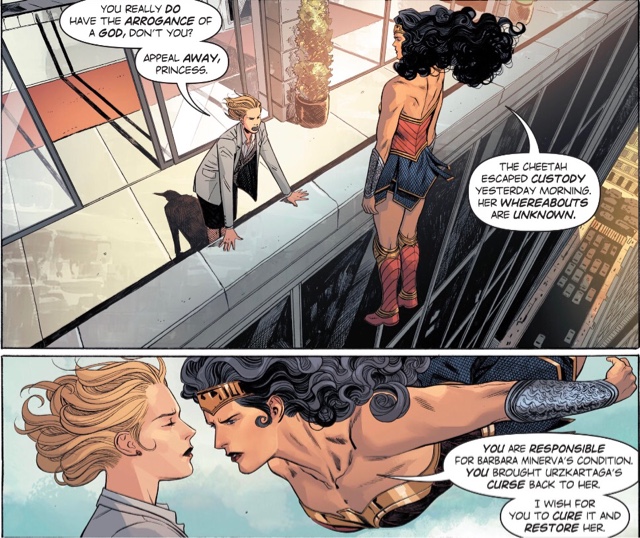 Batman and Superman have words with our heroine, they're worried, wonder if her odd mood is connected to the fact she doesn't have the magic lasso with her. She explains that her gods have betrayed her, the boys remind her that she's really a hopeful soul and should confront her disdainful deities. 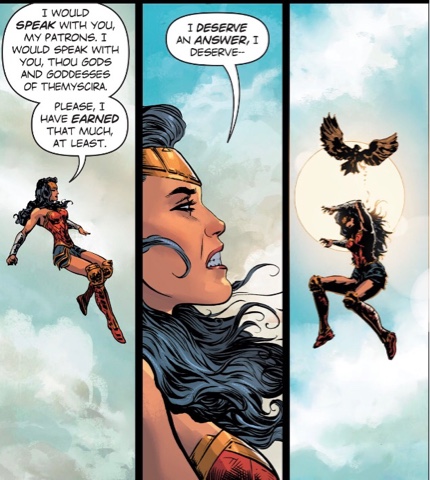 Diana goes and find them - it looks like Athena the owl poops on her - and her anger vanishes because they say that despite lying to her for years, they love her, and give her her lasso back. 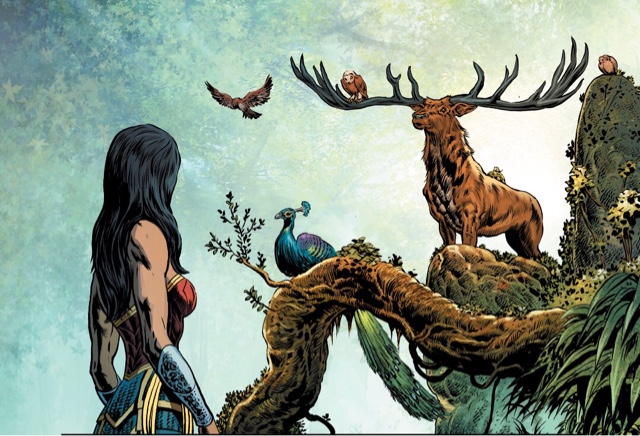 Steve Trevor has decorated Diana's new house, made a meal and shaved his beard off. He's really sad about something, but gets to bed Wonder Woman.
Maybe if I'd read every issue this one would have been satisfying; the comic is certainly pleased with itself, revealing the story title, Perfect, on the final page. But I purchased the first eight, and probably every third one since then, and every issue has proven similarly frustrating. It's all slow reveal, or no reveal. I still don't know why the Paradise Island from the Brian Azzarello run has been declared false... what's that all about? Was Diana miming her visits there, or was there a Rebirth reality check?
Diana isn't an attractive character here - she's cranky, then angry, then dim, and could she not at least have tried a few mouthfuls of Steve's food before trying a few mouthfuls of Steve... sorry, that's coarse, but that's another thing that bugs me, Diana wanting to have sex with Steve when the guy looks like he really needs a hug (maybe he's sad about being the only major cast member not on the cover).
And as with his first run, Rucka has Cale be the vaguely annoying ordinary woman immune to Diana's charm. I suspect we're meant to find her fascinating.
I laughed at the scene description here...

Can't let those pesky comic book readers know the name of a made-up place that's never appeared previously and will never be seen again, eh?
And how annoying are Diana's gods, hanging around like extras in a Snow White cartoon when they could be explaining stuff, maybe apologising?
I did like the panel of Diana literally getting in the ever-smug Cale's face. Then again, maybe if Diana came down off her floaty metaphorical mountain and stopped looking down on Cale, she might get the assistance she's after.
That shot is the work of artist Bilquis Evely, who took over when Nicola Scott left the book; I really enjoy her art, I'm glad she's gotten a regular gig since the sublime Sugar & Spike mini. Superman's body language in the scene set... hmm, my notes seem to have a gap... is superb. 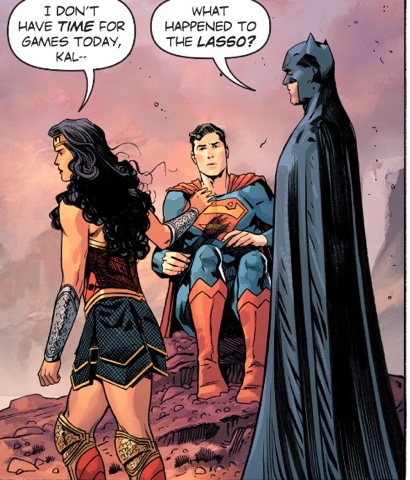 And the more ornate illustrations of Liam Sharp are perfect for Diana's mythological mission. The two art styles in the one story, though, make for a difficult fit, despite the lovely, gem-like colours of Romulo Fajardo Jr. 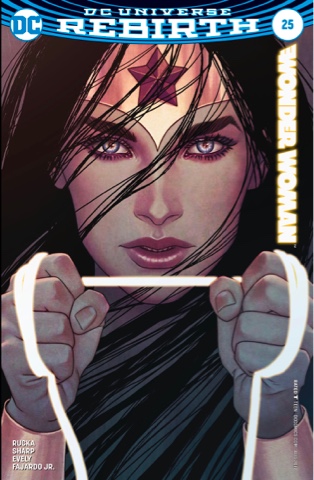 While I still dislike the default expression Diana has worn in this book since DC Rebirth began - she honestly looks dopey, half drunk - Sharp's cover is gorgeous. A UK gallery currently has his work on display and I applaud them, he's a terrific illustrator, and only getting better. The second cover, by Jenny Frison, is a stunning portrait - Diana has been blessed with splendid art since this run began (probably there's a god involved).
I suppose this is a happy ending. Diana has learned something and made her peace with it. She and Steve are together. And she has a new home shaped like an umbrella.

But as with every other issue of this series I've read, there's no wow factor. Still, new writer next issue.
Of course, I shall give it a go.
Bilquis Evely DC Rebirth Greg Rucka Jenny Frison Liam Sharp Romulo Fajardo Jr Wonder Woman #25 review