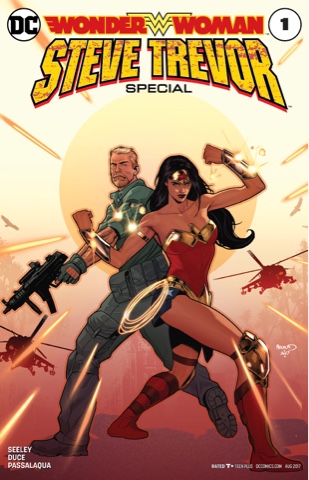 It's just another day for Steve Trevor.
A spot of monster fighting... 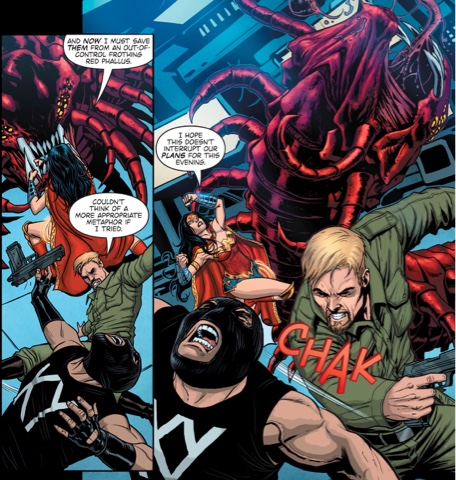 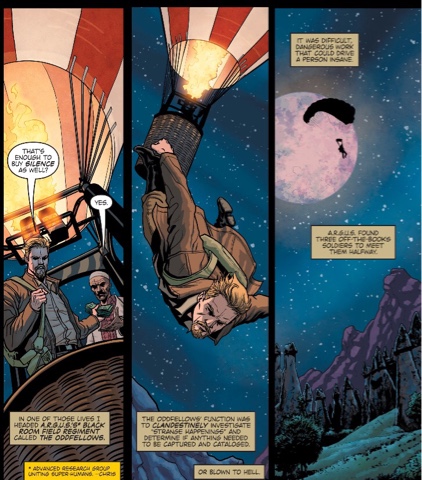 Of course, Steve Trevor being the number one Above Average action man of the DC Universe, things are going to get a little odd. Happily, he knows three rather odd fellows 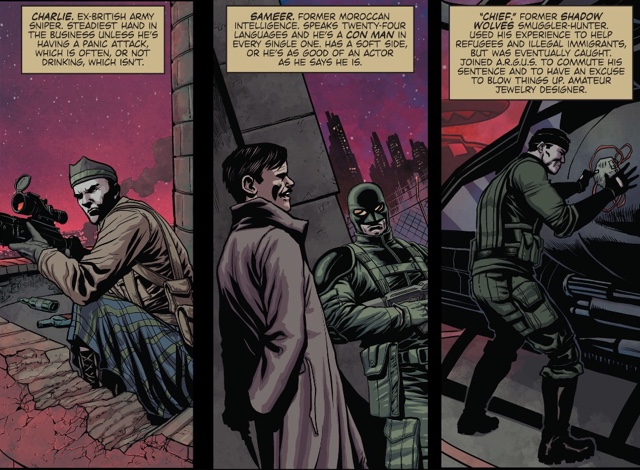 He joins them in Syria where an enchanting adventuress named Saturna is determined to steal the secrets of the mysterious Fatma.
Saturna, it's fair to say, is a piece of work. 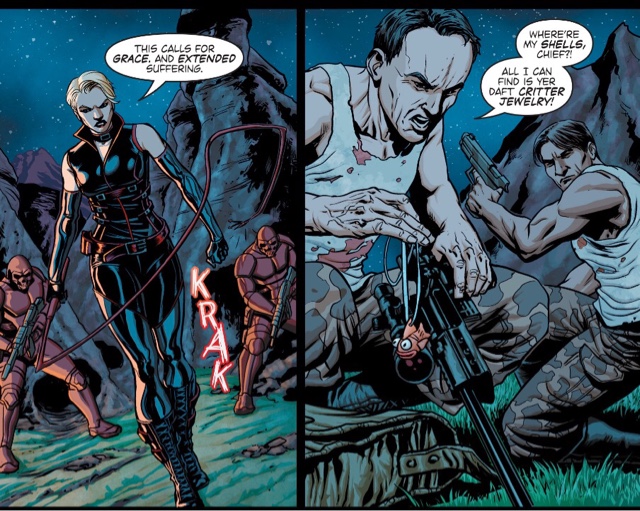 Tim Seeley has skills. In just 20 pages he gives us a sharp pen portrait of Steve Trevor, defines his relationship with Diana, introduces a wonderfully boo-able new baddie and incorporates elements of the blockbuster Wonder Woman film into the DC Universe.
I don't recall Charlie, Sameer and Chief being referred to as the Oddfellows on the movie, as they are here, but the name certainly suits them. It's not quite the big screen versions, as this story is set a century on, but they're certainly the same guys; richer even, as, for example, Chief is given a very useful hobby. Seeley's gift for dialogue really comes through with Scot Charlie, and it's just great to see Steve Trevor having actual mates for the first time ever. I'd happily read more adventures of the Oddfellows.
This issue is a done-in-one, though it does leave a splendid hint that there'll be a sequel - certainly Saturna feels like a classic Wonder Woman villain, with her Wagnerian whimsy and a name recalling the home planet of Golden Age bad girl Eviless.

Plus: whip.
Having not stuck with the current Wonder Woman series, I've no clear picture of who Steve Trevor is... beardy shirtless guy with gun seemed about it. He has the beard here, but rather more depth as we learn something about him that even Diana doesn't know.
As for the relationship between Steve and Diana, Seeley gives them real chemistry in their brief moments together - for the first time since the Eighties, they actually seem like a couple. I hope Seeley gets to write the pair again, and soon.
Another sign that he gets Wonder Woman is that the ARGUS raiders at the start of the book, with their XY shirts, are woman haters, a fine tradition in the DC Universe that's going to get you slapped, and rightly so.
Artist Christian Duce, who  I was praising earlier this week for his work on Nightwing #21, shows again why DC should sign him to an exclusive. His storytelling, character designs and presentation of action mark him out as a talent to cherish. Sameer and co don't look exactly as they do in the film, which is likely a licensing issue, but they're enough like them that their appearance doesn't jar. It's a shame Charlie's kilt isn't tartan, though!
Allan Passalaqua colours the issue with style, especially in the Turkey sequence, from the nighttime sortie to the gorgeous colours of dawn. Josh Reed's letters sit subtly on the page, ensuring every word is 'heard'. 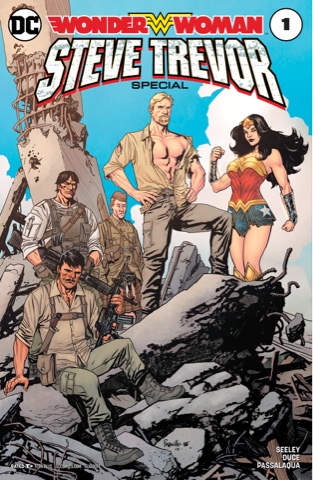 Paul Renaud's main cover is good looking, but puts Steve firmly in the subordinate role rather than as Diana's partner, and he looks like a man in his fifties. I'd have made the variant by illustrator Yanick Paquette and colourist Nathan Fairbairn the main version, not least because it features, the Chief, Charlie and Sameer.
Still, that's just backseat editing. Actual editors Chris Conroy and Dave Wielgosz have done a terrific job blending the Steve of the comics with his film counterpart, cronies and all. I got a big kick out of the tiny alternate title in the credits box the pair have put together. On the cover it's Wonder Woman: Steve Trevor Special. Here, though, it's...