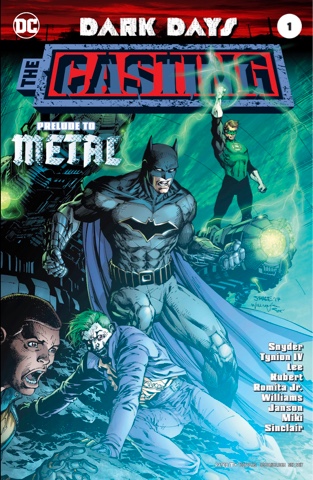 One of the big keynotes of the DC Universe is legacy - heroes and villains constantly reborn, either literally, like Hawkman, or figuratively, like the Flash. Something less talked about, but for me a big part of the appeal of the line, is scope, and that's what this comic has in spades. So what does scope, for me, involve?
Think Time. Where the superheroic era of the Marvel Universe traditionally starts with the Second World War, DC has long had stories sparked by events that occurred when the stars were young. We're reminded of this here with Hawkman remembering his origins millennia ago, and realising they stretch beyond the first life he remembers. 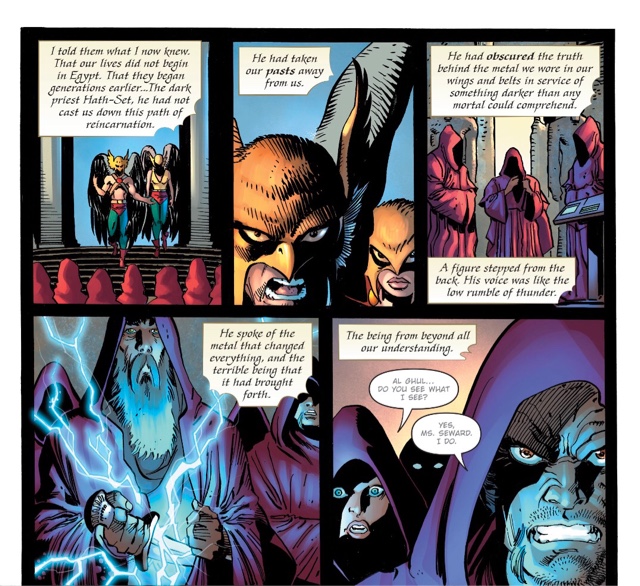 Then there's Space, with star-spanning Green Lantern Hal Jordan sent to investigate something weird in the Batcave that could mean the end of everything.
And Legend, as Batman fights a beast that should be mythical in order to gain an audience with a god.
It's this kind of scope which marks a good old-fashioned DC summer blockbuster, delivered in style by a creative team headed by writers Scott Snyder and James Tynion IV and pencillers Andy Kubert, John Romita Jr and Jim Lee.
Dark Days: The Casting picks up the baton from Dark Days: The Forge so perfectly that I can't see why the different subtitle - a Dark Days #1 and #2 would make more sense. This double-sized special carries on alternating between Batman's modern day quest to learn the secrets of a mysterious metal that hums in the background of the universe, and Hawkman's journal entries as they unveil his previously unrevealed involvement in the sometimes sunlit, often shadowy world of heroes and villains. 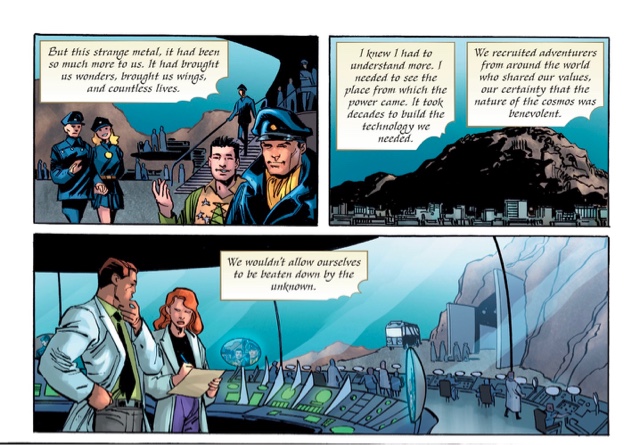 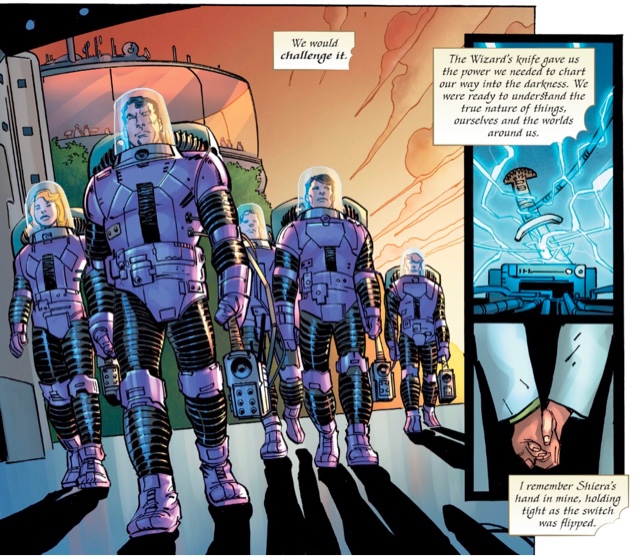 Hawkman and Hawkwoman allied with, maybe organising and financing, the Challengers of the Unknown and the Blackhawks? It's intriguing, and perhaps important for the story, but knitting Khufu/Katar/Carter and Chay-ara/Shayera/Shiera too tightly into the adventures of two of DC's cult teams risks taking away from their agency.
I'm a lot keener on the idea of the Hawks gathering the planet's immortals to learn what they know of the Nth/Ninth Metal which gives them power and longevity. Or so they thought. 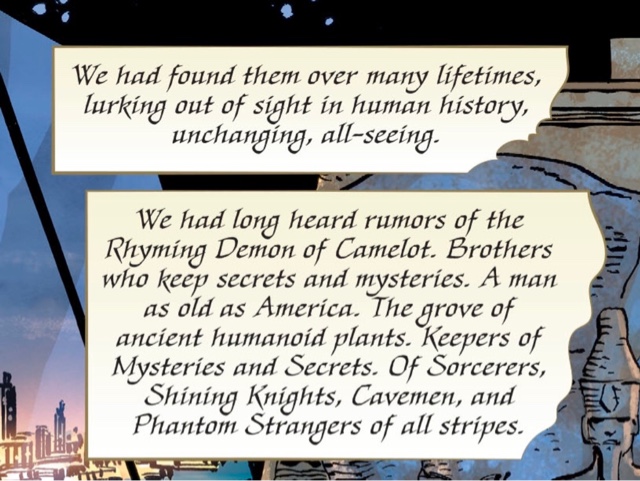 Ignoring that Cain and Abel seem to be evoked twice, that's a really nice piece of writing, inviting us to guess who's under the purple hoods (all robes in DC comics are purple, it's the Law). Ra's al-Ghul, up top, is obvious, for example, but points for anyone who can identify 'Ms Seward' without looking her up! And exactly who is for the birds? 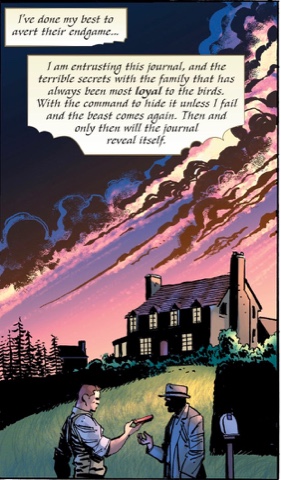 We also get a revelation about why Batman has taken in Duke Thomas but doesn't want him to be a Robin; cave paintings that point towards a surprising rivalry; a more detailed look at the Joker's recent resurrection, and more. It's intriguing, exciting stuff from Snyder and Tynion, pointing towards a Dark Crisis (the Classical gods have fled, of course there's a crisis coming...).
Despite all the high adventure, my favourite moment is pretty much a gag. 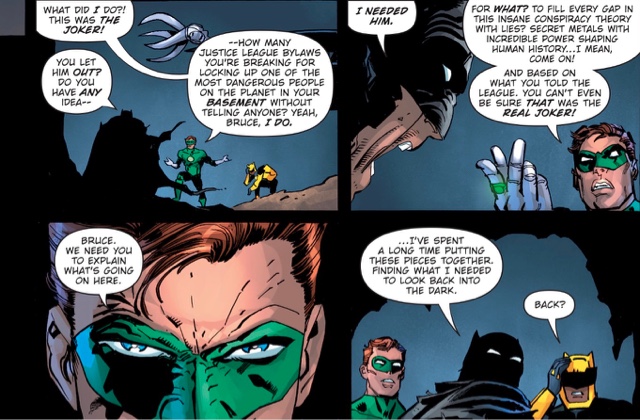 Hal Jordan, stickler for rules. Well, he is an intergalactic lawman.
The issue ends with a set-up for a coming series of specials, but I won't spoil in case you've missed the publicity.
The veteran pencillers show their experience, telling the story with nary a bump, but there's not much in the way of standout images. Some potentially big visuals are thrown away - the destruction of a DC landmark and possible death of its caretakers, for example, would fit onto a postage stamp. And the artists are occasionally hobbled by wordiness, but I'm not complaining as the odd bit of chatty exposition is forgivable in a 40pp strip that's setting up something big.
But Kubert, with more delicate than usual inks from Klaus Janson, produces a great monster moment, Lee and Scott Williams give Batman a splendid reunion with Hal Jordan and Romita Jr's depiction of the 'blink and you miss it' battle with a not-so-mythical monster, with Danny Miki, is terrific. 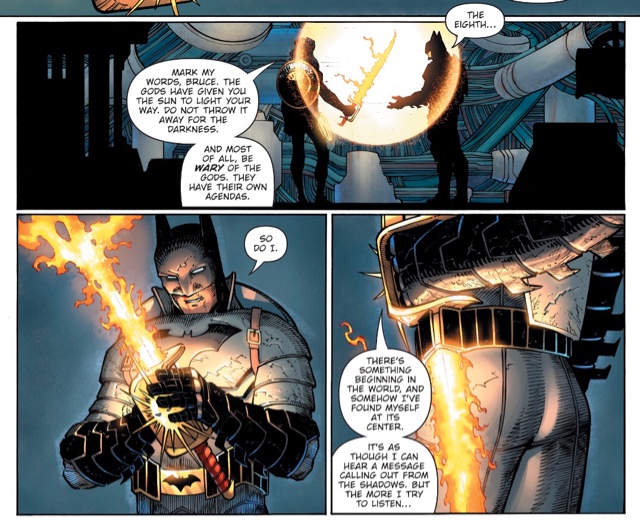 Mind, the last pair also have to draw a close up Bat-butt, and boy, does it look weird sans shorts.
Alex Sinclair and Jeremiah Skipper add atmosphere with well-chosen tones, while Steve Wands' lettering is a tour de force in terms of style and colour, from the Joker's jagged font to Hawkman's serif-laden script. 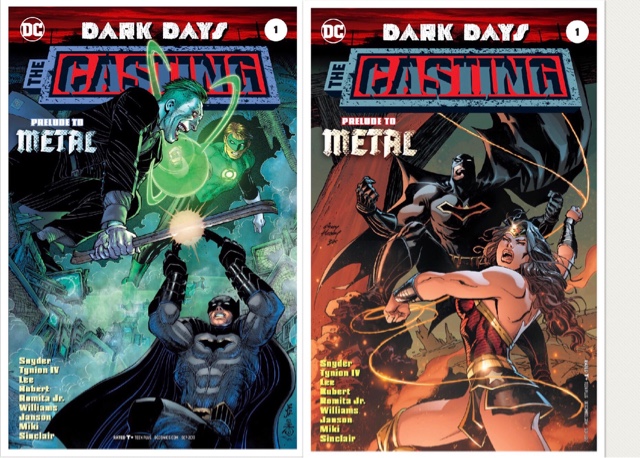