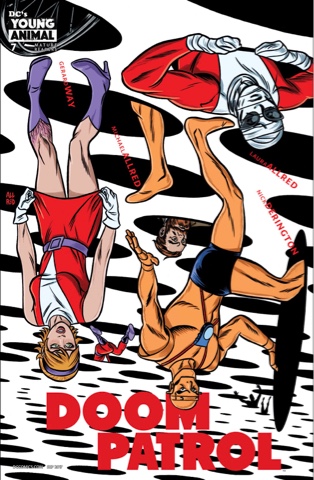 The Chief is back and he wants to lead the Doom Patrol again. Robotman isn't keen. 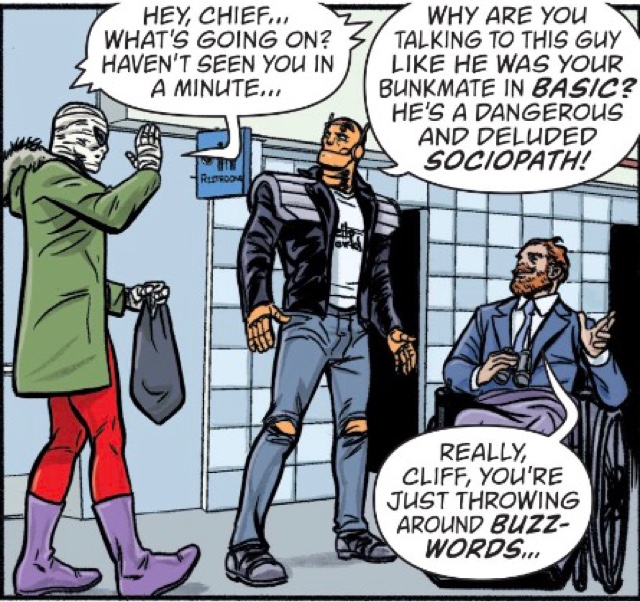 I see his point. And yet soon the Chief is getting a trial run as head honcho. 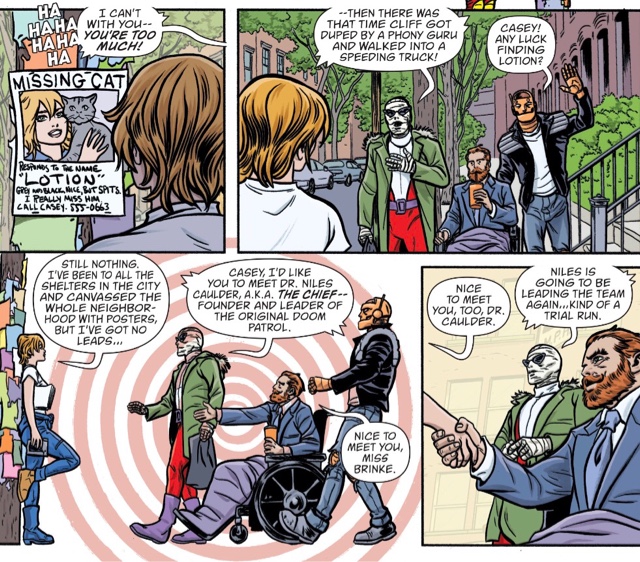 Hang on though, look at that background. Who else had a concentric circles effect when using his power? 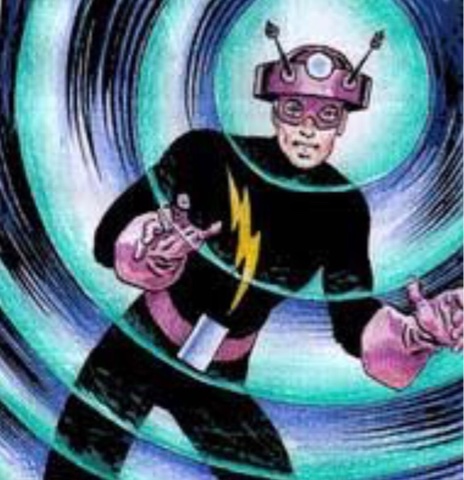 Steve Dayton, Mento. He could do things to your head. And check out what's in The Chief's lab a few images below - a mess of Mento helmets.
Mind control is the only justification I can see for Negative Man and Robotman to once more bow to the whims of a man who proved more villain than hero, despite a warning from Crazy Jane - The Chief is here outside Dannyland, so maybe he can't Mento-head her. Or perhaps his brand of crazy isn't as strong as hers. 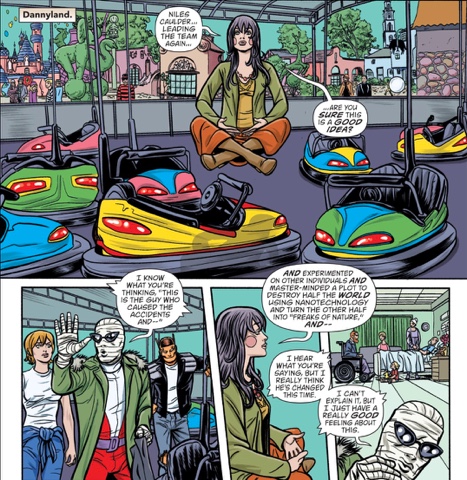 Soon, Cliff, Larry and new recruit Casey Brinke are being remade in The Chief's image, right down to Space Case being pushed into a Rita Farr uniform. 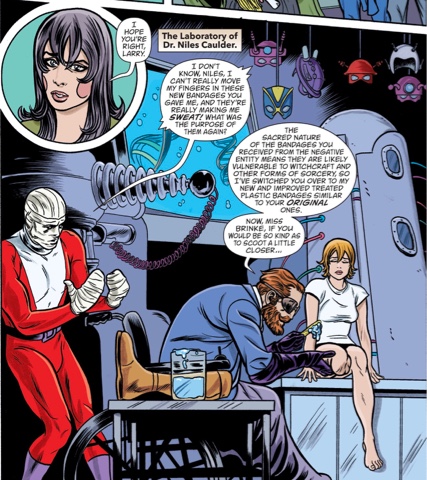 And they're listening to a tale of idiots... sorry, idyats. 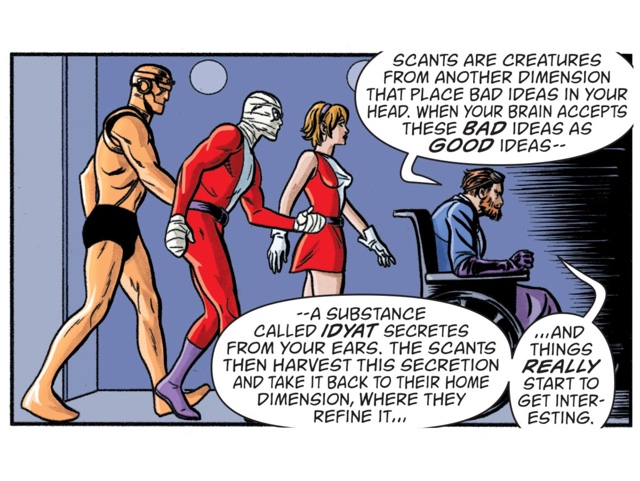 Has he been watching Avenue Q? If those aren't the Bad Idea Bears... There follows an adventure on an unknown world wild and wacky enough to break whatever spell our heroes are under.

And look, another Mento burst.
I've skipped over the Doom Patrol's Battle for the Planet of the Scants because it's the type of wacky nonsense we've seen plenty of; fun, clever, but pretty much rote. I'm more interested in the reunion of Cliff, Larry and The Chief, Niles Caulder. Is the Chief controlling Robotman, Negative Man (and Space Case)? Or is that fly that's been around Niles since this volume debuted, and which pops up here, an insidious insect, a weevil mastermind? The Chief does seem contrite at the end or, at least, addled. 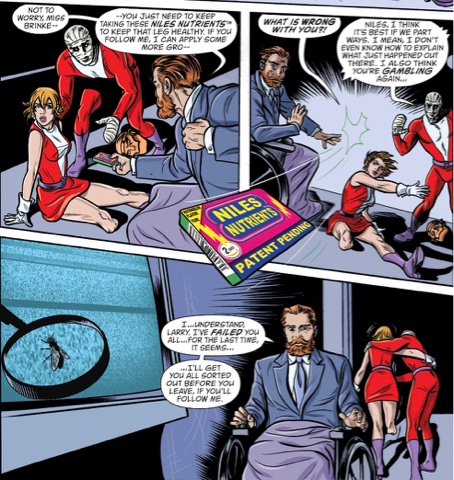 It makes sense that Casey, who doesn't have the long history with Niles that the boys have, is more able to resist his charms. Not totally, but she seems to snap out of it first. 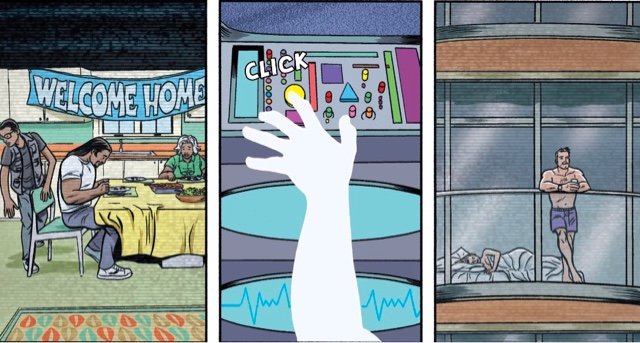 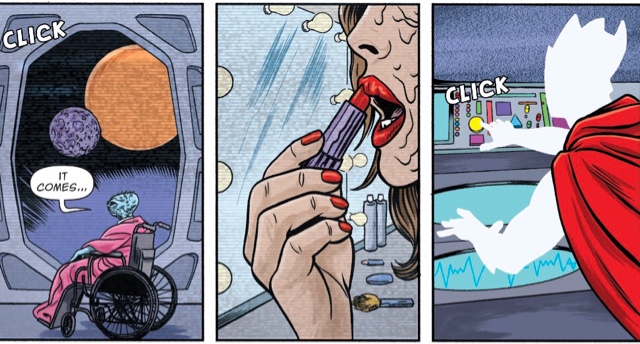 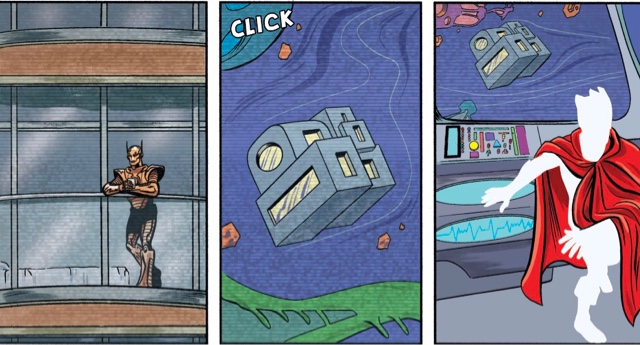 Oh, and what does this page mean, which pops up as an unannounced interlude? The Bronze Age Robotman? An unknown playboy? An alien Niles? Rita, hiding her melting face with make-up? Writer Gerard Way is intriguing me.
This issue also picks up on the subplot involving Casey's missing cat, Lotion, and sets up the coming $#!+ storyline, which looks a lot ruder as transcribed by regular artist Nick Derington, who drops by for the final two pages of the book. Before that it's all guest artists Mike Allred, on illustrations, and Laura Allred, on colours. The Scant business feels as if it's been included simply to give them the type of action sequence at which they excel. It's certainly vibrant, kinetic stuff. Oh go on then, have a look. 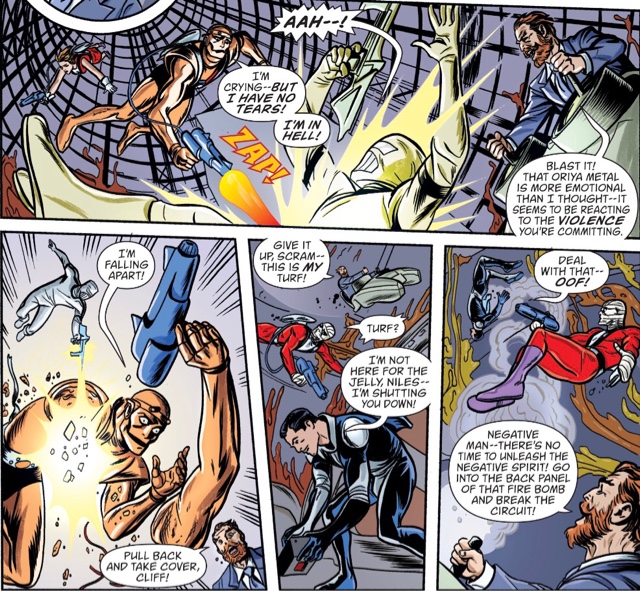 But it's everything around it that truly excites me; the Allreds create worlds that exude a delightful banality, their artistic naturalism at odds with the nuttiness of the Doom Patrol's everyday experiences. I love the throwback inset panels, the credit page headshots, the Chief's barely restrained mania... any day the Allreds touch the Doom Patrol is a good day (if you never saw MIke Allred's issue of DC's Solo title, seek it out).
The first five issues of this series were enjoyable, they had some great moments, but I'd trade all their sprawling, self-conscious lunacy for this more focused done-in-one. 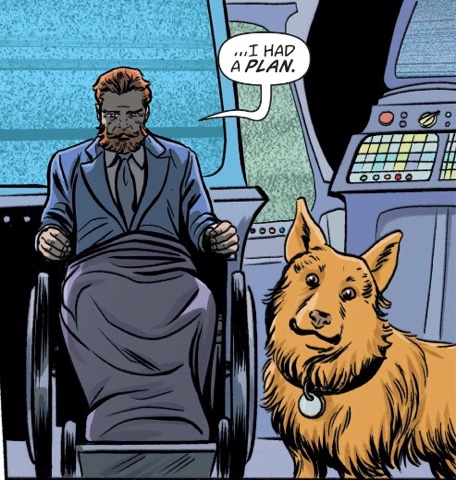 Oh, and am the only person worried for this dog? Such a pretty head... 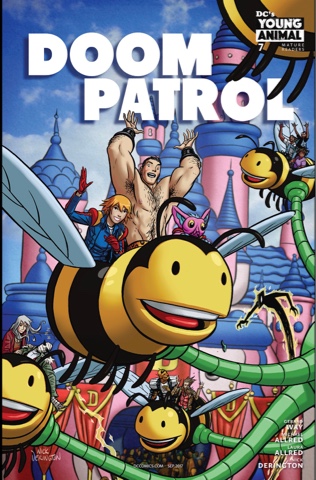