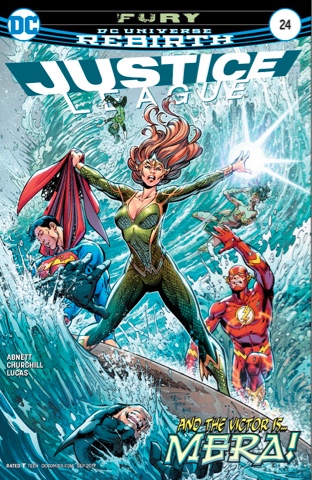 There's a colossal, unnatural storm in the Atlantic, threatening the Eastern Seaboard of the US and the Justice League are stepping up. Winds of 200mph are a threat, but when you have several members with super-speed and endurance, what's to stop you stopping it? 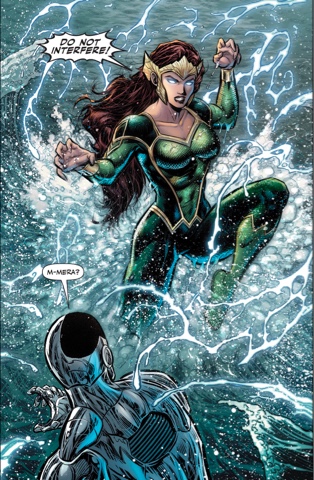 How about the wrath of a water witch? Mera plans to batter open the new mystical dome surrounding Atlantis, and find her previously presumed dead partner, Aquaman. And she's not going to be dissuaded by the League. Fight!
And what a fight it is, as Mera uses her hard water powers - or, as the kids today are calling it, Aquakinetics - to not just hold off the likes of Superman, Wonder Woman and two Green Lanterns, but take them out of the game.
Eventually, Mera calms down long enough to explain to the League just why she can't have them involved. Atlantis and the surface world have been at odds too many times, and while Mera represents only herself, an assault by the League could have devastating consequences. And in my favourite scene, Wonder Woman, warrior for peace, shows that she gets it. 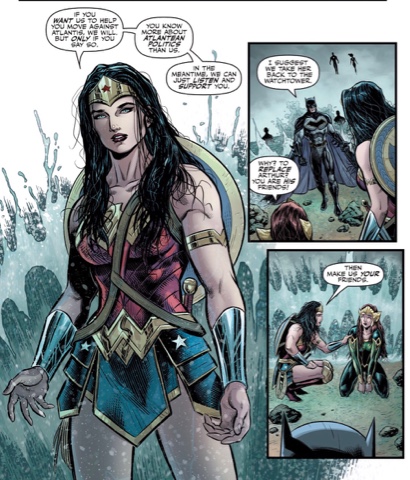 As I understand it, Aquaman writer Dan Abnett stepped in to help ongoing Justice League writer Brian Hitch out of a deadline crunch - that's fortnightly books for you. And I'm so glad he did, slipping in a superb side story that properly introduces this version of Mera to this version of the League. While there is an element of the League perhaps holding back, reluctant to pile onto the love of one of their own, the Xebel rebel is undeniably fearsomely formidable, surprising the heroes with the extent of her abilities and willingness to use them ruthlessly.
As impressive as the action is the character work, as we see Mera's vulnerable side. 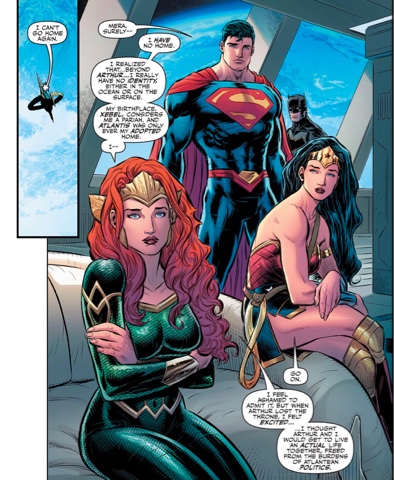 Abnett never turns in a bad read, and his Aquaman series just gets better. Here he shows that he should be given a crack at being full-time Justice League writer as soon as there's an opening. There's also a strong case here for him to take over the Wonder Woman series once upcoming writers Shay Fontana and James Robinson are done.
Illustrator Ian Churchill, meanwhile, produces strong work throughout, giving us a great-looking League and a marvellous Mera. I particularly like the contrasts between the expressions and body language of seasoned heroes such as Cyborg and newbies like Green Lantern Jessica Cruz. And just look at his Underwater Stalking Batman... 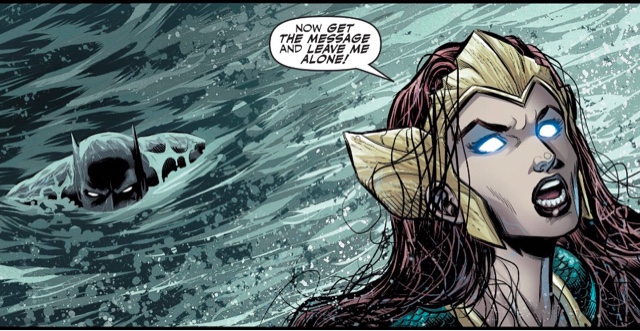 The colour work of Adriano Lucas is stunning, from the subtle skin tones to the power of the ocean, and the contrast between our heroes in the different environments - sea vs satellite - is stark, as it should be. And I love how wet Churchill and Lucas have everyone after the big fight.
The pleasantly precise lettering is by Richard Starkings and Comicraft, and in a nice touch, editor Brian Cunningham allows this issue to be dedicated to inspirational Comicraft stalwart Albert Deschesne, who died recently. 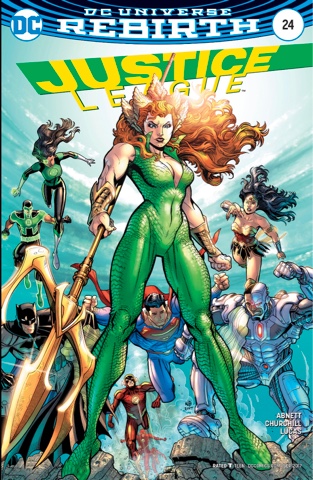 The regular cover from penciller Paul Pelletier, inker Sandra Hope and colourist Hi-Fi, and the variant by illustrator Nick Bradshaw and huesman Alex Sinclair, take the same concept and are both decent; neither really stands out.
If you're reading Aquaman you won't wish to miss this splendid spin-off story. If you're reading Justice League regularly you may welcome a break from the ongoing 'Something's Coming, Honest, It Is, Really' story. And if you simply enjoy seeing an underrated character get the respect she deserves among people who didn't realise she was their peer, this issue - and especially the final page - will have you cheering.
Adriano Lucas Albert Deschesne Alex Sinclair Aquaman Brian Cunningham Comicraft Dan Abnett DC Rebirth Hi-Fi Ian Churchill Justice League #24 review Mera Nick Bradshaw Sandra Hope