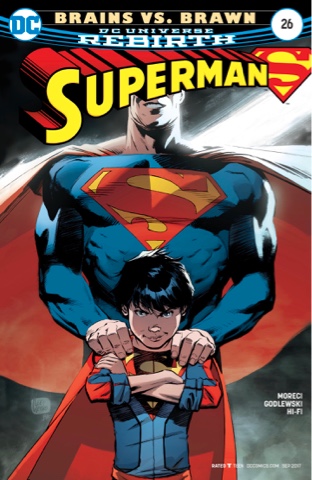 Jon Kent has been through trials by fire. He's found out his parents come from another Earth and his dad is Superman. He's fought monsters both human and inhuman. He's had his mind corrupted. He's survived several team-ups with Damian Wayne. Truth be told, he's getting a little cocky.
And when you're overconfident, and don't listen, things can go badly wrong.

Superman had thought himself a pretty decent parent, but Jon's getting out of control. Lois, though, has an idea.

What would the original Jonathan Kent, Clark's adoptive father, do? And Superman reckons it's a good suggestion - give Jon enough rope to hang himself, or to lasso the moon. With him having his son's back, what could possibly do wrong? 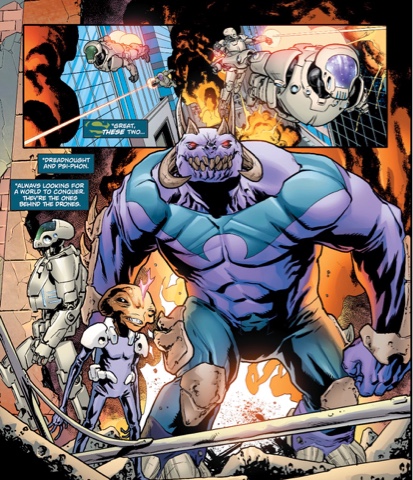 Ah.
After the enjoyable, but lengthy, Black Dawn story, this is a refreshing done-in-one from the guest creative team of writer Mike Moreci and artist Scott Godlewski. It takes the familiar Superman trope of the original Jonathan Kent being Wisdom Personified and puts a new spin-on it, as Clark tries to be the Pa Kent for a new age. While this is far from an after-school special, the idea that we never stop learning is front and centre, and it's good to be reminded of this.
The relationship between Clark and Jon, while a little strained, is basically solid; these guys love one another, and Lois loves them both. I'd love to see a sequel with Jon spending a day with his Mom. The smart structure of Brains vs Brawn shows Moreci, who produced a neat Kyle Rayner short for last year's New Talent Showcase, is growing as a writer. What's more, his father-son dialogue is excellent, and he writes a great action sequence... who knew I'd be so pleased to see post-Crisis no-marks Dreadnought and Psi-phon again? 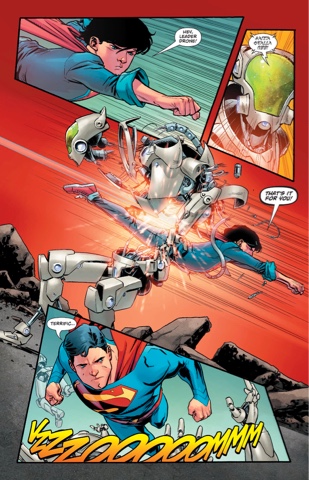 Godlewski's interpretation of the script is good. His storytelling choices are smart, there's dynamism to spare, the quieter scenes work nicely, and while his version of Jon is a little more rufty-tufty than we're used to, it suits the story and he's recognisably Lois and Clark's kid. Plus, he works hard to make the backgrounds believable, and leisurewear Clark looks brilliant. I think this is Godlewski's DC debut, and I'd be happy to see more from him. 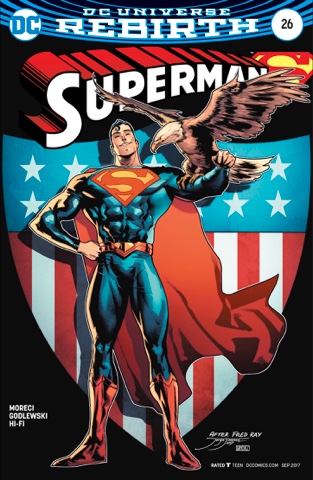 We get two cracking covers: Illustrator Lee Weeks and colourist Brad Anderson cleverly hint that Jon aims to outshine his pop, while Jorge Jimenez and Alejandro Sanchez ably update Fred Ray's famed Superman #14 cover (they aren't the first, and you can bet they won't be the last). And credit to Jimenez for crediting Ray - it's a proud lineage.
While this issue isn't by the regular creatives, I'd venture that it's nevertheless a key issue in terms of Jon's development as a hero, and Clark's relationship with Jon. And it also happens to be charming as heck.
Alejandro Sanchez Brad Anderson Fred Ray Jorge Jimenez Lee Weeks Mike Moreci Scott Godlewski Superman #26 review