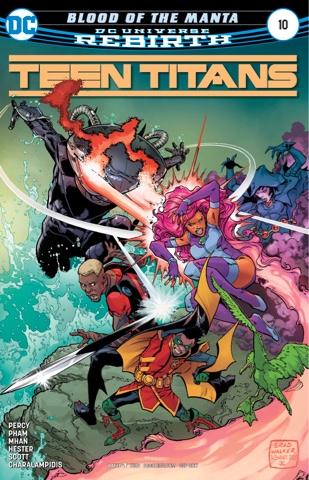 In San Francisco Bay, supervillain Black Manta tries to kill the mother of his son. But if she dies, Lucia isn't going down easily. 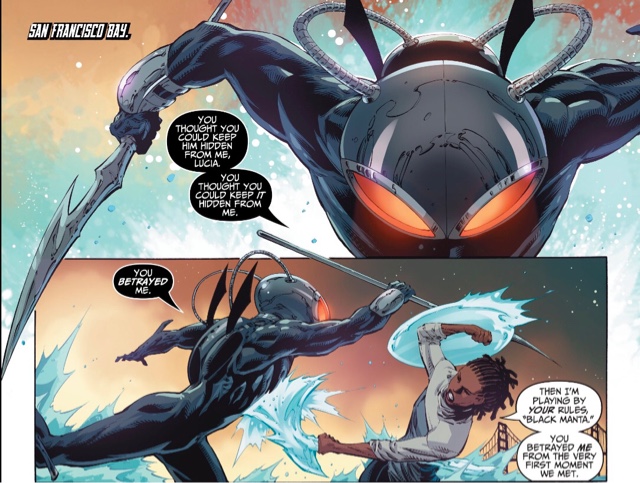 While she's been living in the heart of the US, she's from the other-dimensional realm of Xebel, with hard water powers similar to those of its most famous daughter, Mera. The warring couple's son, Jackson Hyde, turns up, and as he defends his mother, learns that Manta is his father. 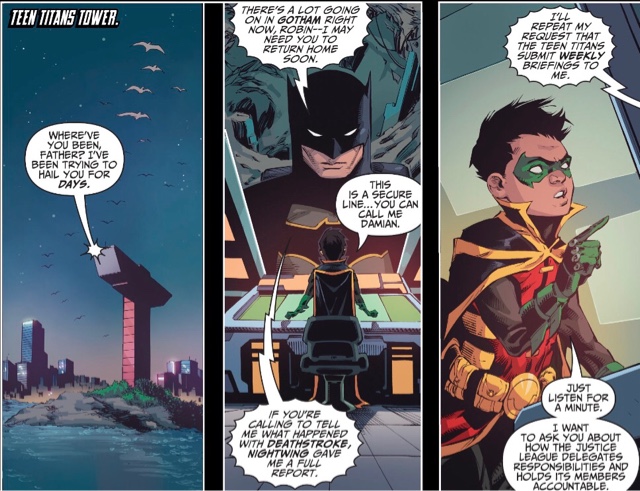 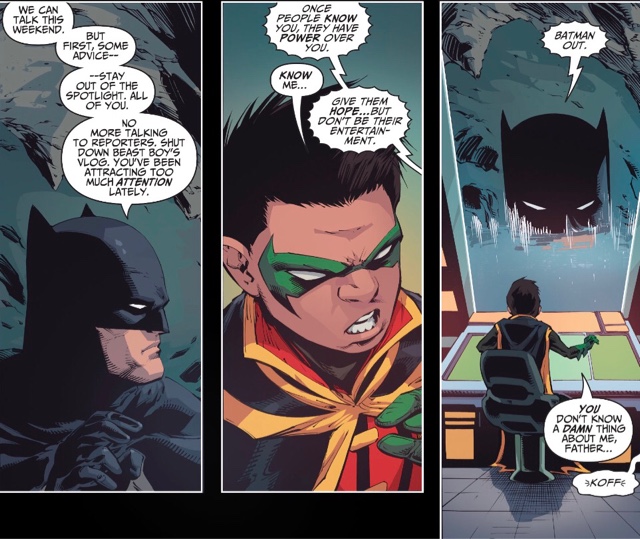 Meanwhile, Damian Wayne is talking to his famous father. Raven overhears and her empathic nature kicks in. The latest Robin isn't pleased, making it almost a relief when an injured Lucia shows up to distract them.
In town, two Titans are shopping and Beast Boy's not happy. 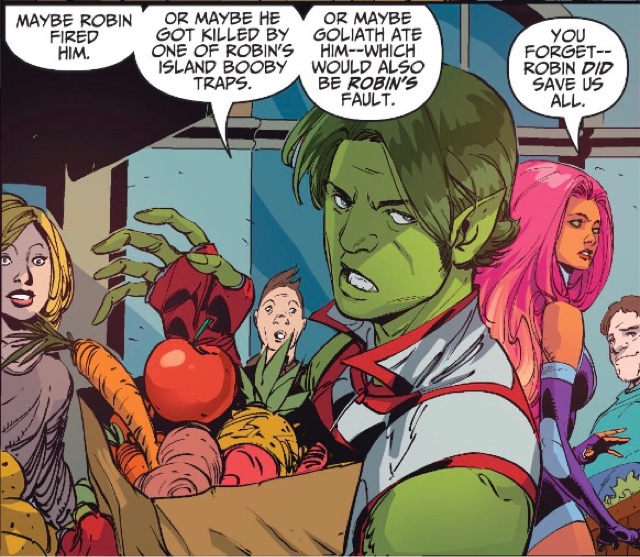 Aqualad agrees to join Manta on his quest for an object of power in return for Lucia's life, but while he's learning about the fabled Black Pearl, his mother is dying. And that's when the Teen Titans show that for young superheroes, they make pretty decent medics. 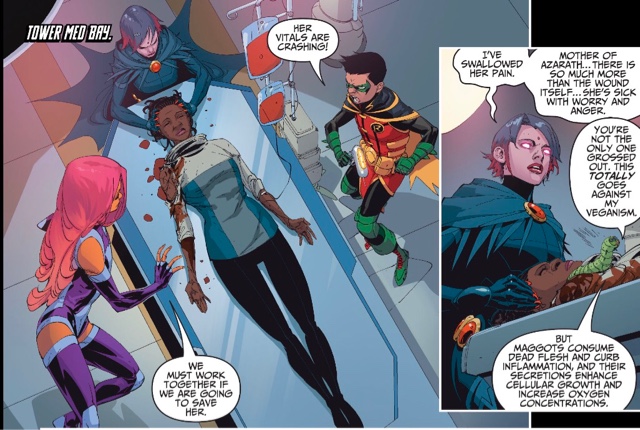 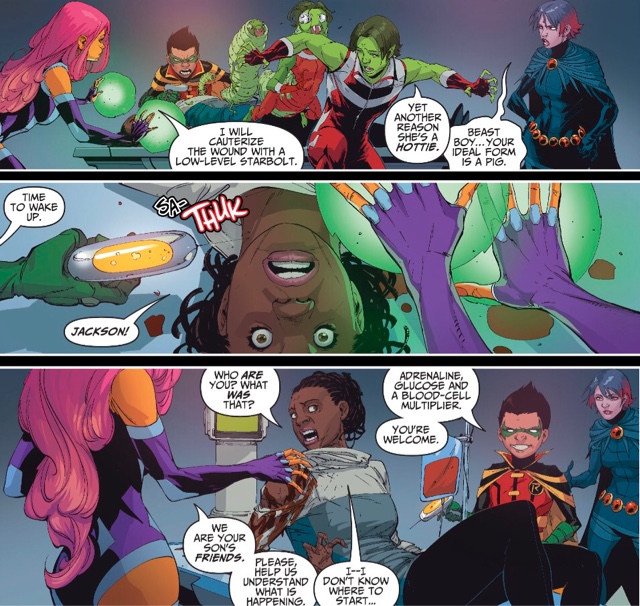 Kory, no pun intended, is on fire. And she only gets better, organising her fellow heroes into a rescue party for Aqualad. And guess who isn't happy...

This is the Starfire I love - easy to underestimate due to her sunny nature, but the consummate warrior and strategist. She's not trying to make a point about Robin's leadership capabilities, just doing what comes naturally to her. She's more experienced than Damian, and it shows.
It's a great scene in a first-rate superhero soap. The last few issues have seen writer Benjamin Percy find his feet with this series, giving us some terrific character moments and dynamics. Gar being the one to finally ask why the heck they're following the younger, arrogant, apparently unhinged Damian... Raven showing real insight into Robin... Gar's knowledge of the animal kingdom... the Titans as ad hoc medics ... Gar presented as non-sexist for possibly the first time ever... you'll notice a theme here - this is a great issue for Gar.
As for the marquee villain, Black Manta, he's on great form: vicious, imperious, and a million miles from taking a Father of the Year medal. 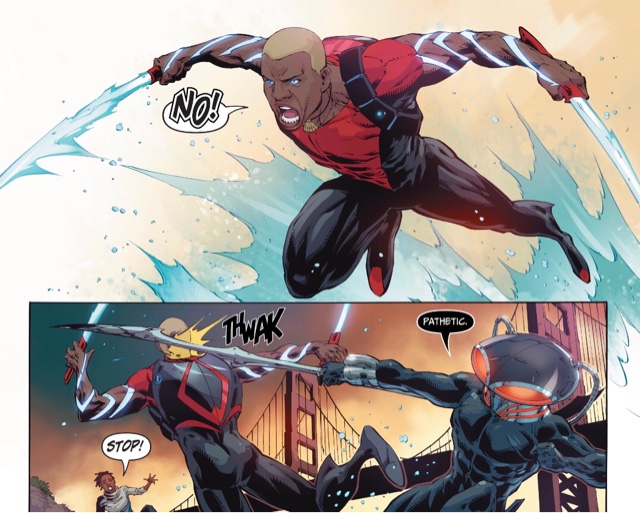 Which brings us to that Batman scene and a rare instance of his showing some concern over Damian's wayward ways, trying to reign him in. Damian's disappointment that he's apparently not living up to his father's expectations, coupled with Starfire stepping up, promises very interesting times ahead. I realise he's a popular - while divisive - character but there's no sane world in which a 13-year-old as mercurial as Damian should be followed by Starfire, Beast Boy, Raven, Aqualad and - when he returns - Kid Flash.
The bulk of this issue is pencilled by Khoi Pham and inked by Trevor Scott, while the final five pages are illustrated by Pop Mhan. Skilled veteran Phil Hester provides the breakdowns, ensuring smooth storytelling, and Pham, Mhan and Scott all do a fine job - this is a very nice-looking book. Favourite visual moments include the Manta/Lucia fight, the cliffhanger image and... 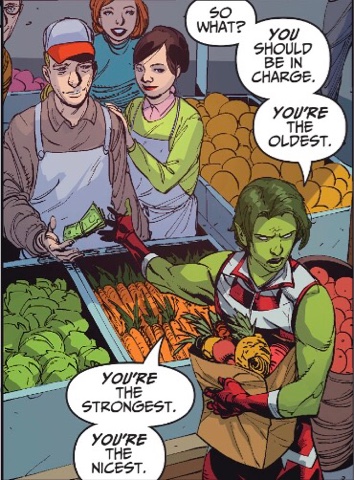 ... you know an art team is good when a visit to a fruit and veg stall is thoroughly engaging; Hester, Pham, Scott and colourist Jim Charalampidis perfectly match Gar's expression to his words, the downward angle adds interest and the reactions of this page's 'background artistes is a story in itself. There's top quality lettering, too, from Corey Breen. 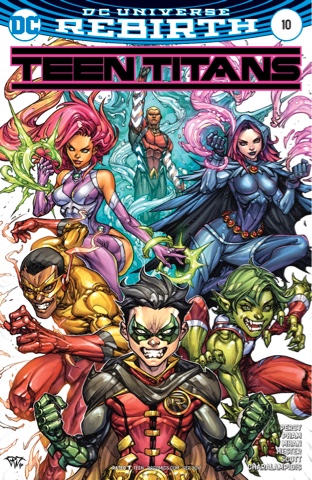 The only thing I don't like about this issue is the alternate cover by artist Paolo Pantalena and colourist Arif Prianto - half of the Titans look deranged. I like the colours and composition, though. The main cover by penciller Brad Walker, inker Andrew Hennessy and Charalampidis is better, though Aqualad's head looks weird - something about the jaw and eyes, plus, all the battle zappery obscures Manta's magnificent mask.
Still, this is a wonderful issue. I thoroughly recommend buying Benjamin Percy's Teen Titans - it's getting better by the month.
Andrew Hennessy Arif Prianto Benjamin Percy Brad Walker Corey Breen DC Rebirth Jim Charalampidis Khoi Pham Paolo Pantalena Phil Hester Pop Mhan Teen Titans #10 review Trevor Scott