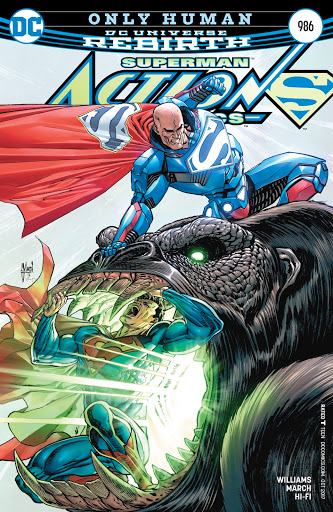 When last we met Superman and Lex Luthor, the latter was in position to kill the former, his mind taken over by the hi-tech head bugs of The Machinist. As a regular human, Lex is no physical threat to Superman, but in the Apokoliptian battle armour he's been sporting while, seemingly, inspired by Superman towards heroism, it's a different matter.

The battle rages, Superman fights back. He wants to believe Lex has indeed been guided by his better angels of late, but what if the Machinist is correct in his belief that his 'Mind-Ticks' are 'just giving people what they always secretly wanted'? Maybe Lex does, at some level, want Superman dead, but I doubt he wanted this... 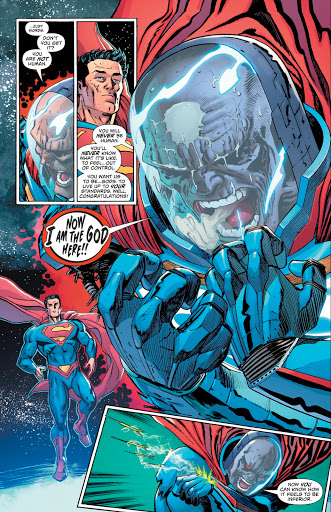 The more Lex uses armour containing technology from the God of Evil's world, the more Darkseid-like he becomes, physically at least. Can Superman help Lex pull himself together or is this the end of his stint as a member of the Superman Family?

I liked last issue's first part, but I love this conclusion. Writer Rob Williams, like Lex at one point, is firing on all cylinders, making what seemed like simply an entertaining fill-in matter. The insight into Lex's psyche, a close look at Superman's current attitude to him, the epilogue which sets up the reveal of Mr Oz... it all makes for an absorbing read. There's a particularly fine moment which sees experienced Superman antagonist Lex spell out to relative newbie The Machinist just how hard the Man of Steel is to fool.

But is Lex feeling admiration or frustration?

Another great piece of business sees Superman stop possessed tigers without striking them. 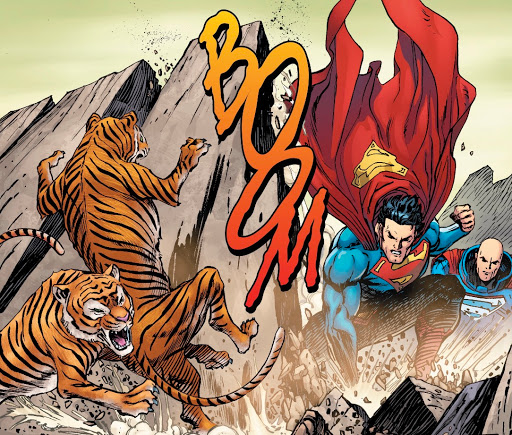 That's lovely work from Guillem March; I wasn't keen on his depiction of elephants last issue, but boy, he does a great tiger. Pretty much every page looks great, in fact, as he composes the images for maximum emotional intensity. You really see the pain our leads go through. That 'Now I am the God here!!' above, for example - it\'92s very apparent Lex is trying his hardest not to go full New Gods.

The colour work from Hi-Fi is as good as we've come to expect, while Rob Leigh never fails to impress with his lettering... I'm guessing Williams wanted the unnecessary and unpleasant double exclamation marks in Lex's dialogue. Tut!!

I'm not going into the Mr Oz business in detail as it's at the end and I try not to wreck the experience for anyone who might buy the book on the basis of my review (oh, the hubris!). But there is a dialogue clue that Mr Oz isn't from Earth, which rather knackers my Pete Ross theory.

Still, that's Next Issue fodder. For now, I'll recommend this comic even if you missed part one, as it's an exciting, emotional story for Lex; I've been fascinated by his various reformations - both real and faked - since the Silver Age of Comics, so this is totally my cup of tea. 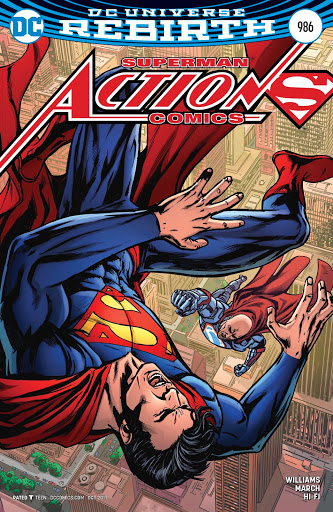 The only sadness is that the main cover teases an appearance by Titano the Super-Ape, who never shows his furry face inside. Still, it's a great image from March and colourist Tomeu Morey, as is the Truth in Advertising variant by illustrator Neil Edwards and colourist Jeromy Cox. This pair should be booked for some Superman interiors at once.

DC are giving the upcoming Oz Effect story a big push, but every issue of this title over the last year has been well worth a read. Action Comics #986 is anoth}