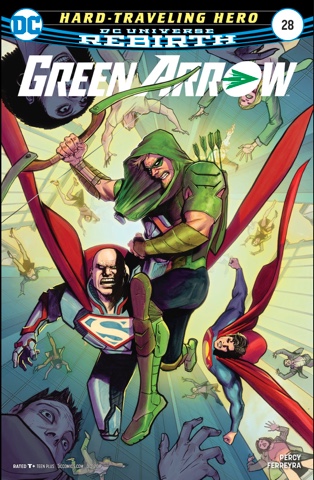 Green Arrow is on a journey. The evil masterminds of the Ninth Circle have stolen his city, his fortune and his reputation and Oliver Queen is fighting back, travelling across the US, squashing their schemes as he bids to take down the organisation.
And along the way, he's meeting local heroes. So far, GA has teamed up with the Flash and Wonder Woman, and this time he's in Metropolis seeking out...

... yep, Lex Luthor. It's not just that he reckons Superman is a tad judgemental, it's that Lexcorp has been linked to the Ninth Circle. Ollie needs to know how much Luthor knows.
Meanwhile, Clark Kent is down below, fighting the good fighting even outwith his blue longjohns.

And then, something snaps in the Lexcorp staff, and it's raining men and women. Elsewhere, people are trying to kill themselves by other means. And Luthor, despite his glass house, can't see it.
You know that Year's Best Comic Stories digest I keep hoping DC will bring back? Well, here's another shoo-in. It's a chapter in a serial that works as a done-in-one. Writer Benjamin Percy advances his A plot, keeps his B narrative purring away in the background, gives Ollie a genuinely astounding moment and looks at Superman and Lex Luthor in a fresh light.
The scene of Clark quietly keeping citizens safe is a winner, beautifully realised by Juan Ferreyra, who provides full-colour illustrations. And when he's costumed, he truly is a beacon of hope and light, bigger than life in many senses, but still the friendly neighbourhood hero a food vendor can call 'Supes'. 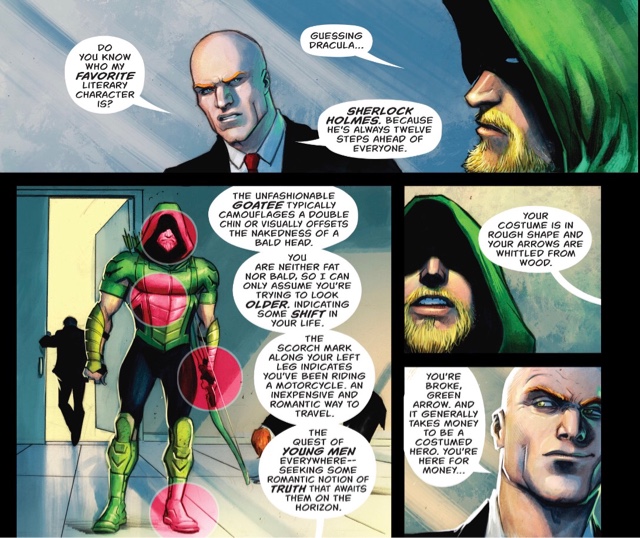 As for Luthor, I just love the idea of him as an unashamed Holmes fanboy. And he seems rather good at the old deductions. It could be rubbish, a conceit Lex thought of ten seconds previously, to amuse himself, but he pulls it off.
Ferreyra's multi-panelled pages add pace to an already fast-moving script; this is Metropolis as not just the City of Tomorrow but City of Secrets, and our heroes - and yes, that includes Luthor - have to save everyone from them. There's so much to like in the art, including but not limited to: Ferreyra remembering that Luthor was once a redhead; the wonderful sense of perspective; and the hero moment. 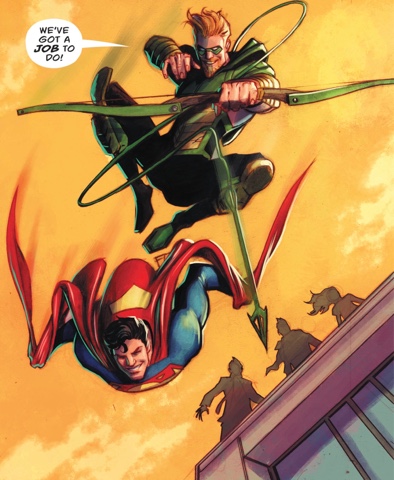 Sheer joy.
I don't want this creative team off Green Arrow, they do a bang-up job, but if the stars one day align and they're offered a Superman book, I hope they grab it with both hands. I want to see how far they can surprise us with their take on Metropolis, its citizens and visitors. 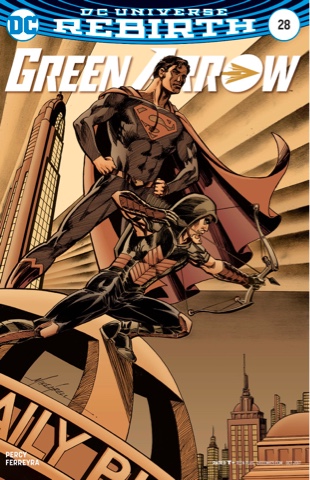