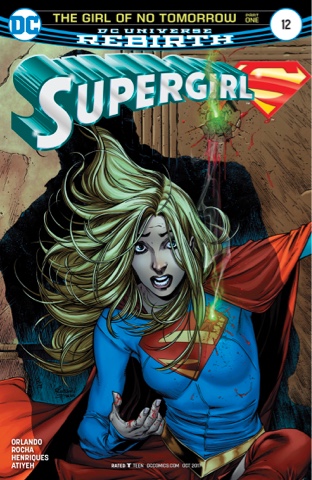 Supergirl has been shot by Cat Grant. Or has she? 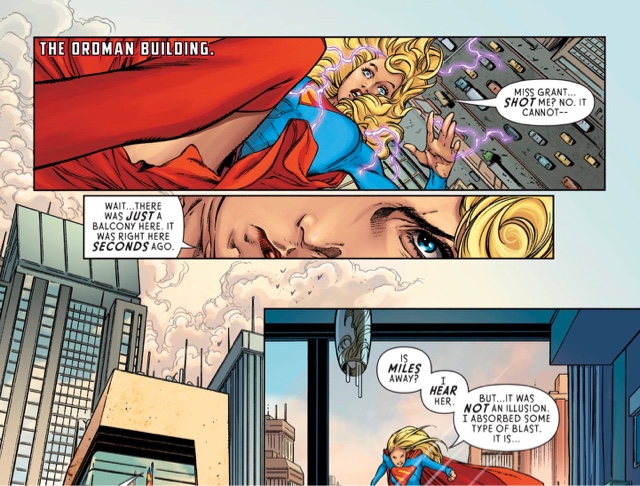 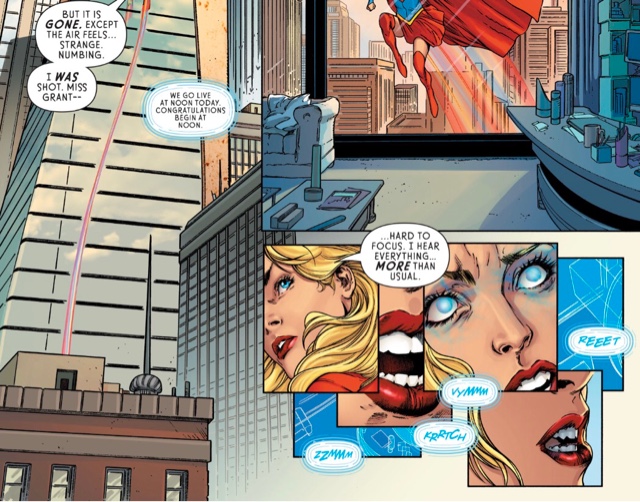 Is Supergirl truly amped up, or has the purple ray actually taken away her adeptness at controlling her powers? Rather than get checked out by her scientist friend Dr Veritas, Kara decides to show up at school, for fear her constant absences will get her kicked out. There, though, her inability to turn down her super-senses and strength ends in near disaster... 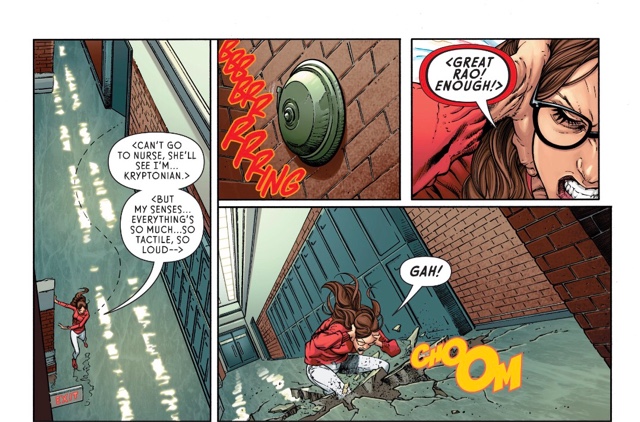 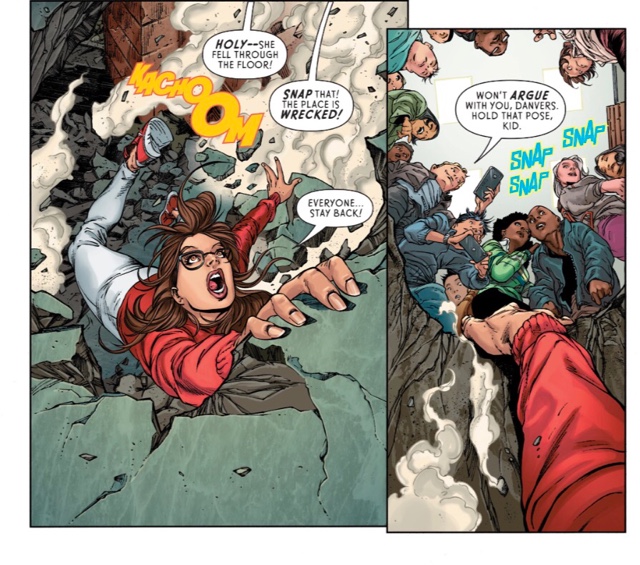 And perhaps the discovery of her secret identity by frenemy Ben Rubel. 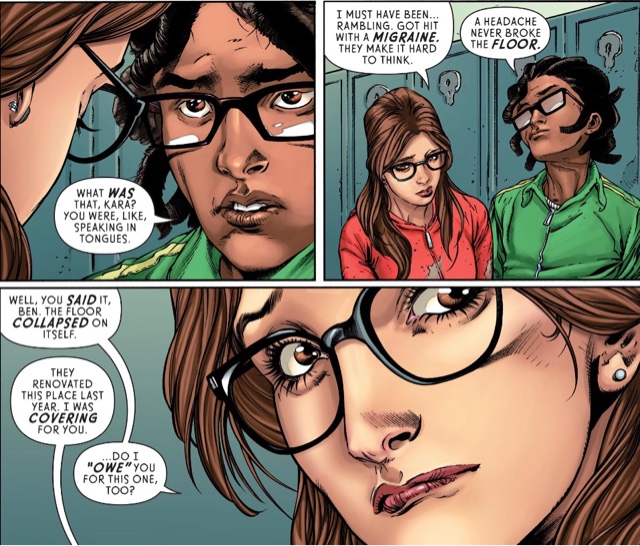 Across Metropolis, the real Cat Grant gets involved in a bitch-off with a witch. 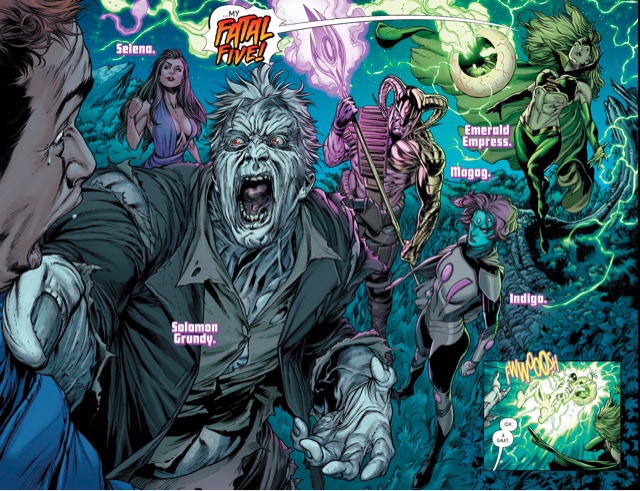 And Kara turns to a surprising person for advice. 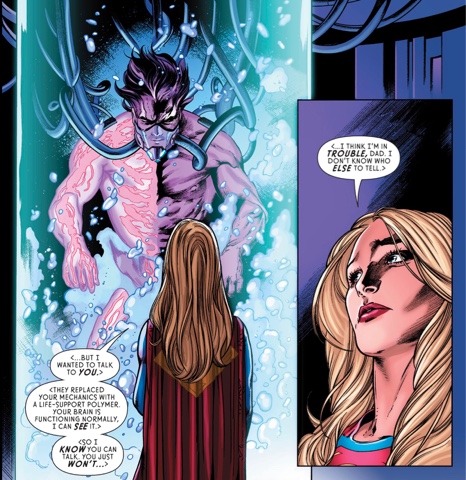 This last scene is my favourite aspect of a packed issue, even if it does imply Kara has forgotten that she's currently close to a certain super-cousin. Writer Steve Orlando's rapid scene changes make for an exciting pace, but this slower section is the heart of the issue. Orlando eschews internal monologue and thought balloons, so we know Kara only by her words and actions and here we see, once again, that Kara won't give up on anyone. Hopefully the regrowing of Zor-El's body will also right his mind.
Ben Rubel, if he's as smart as he's meant to be, has to have figured out that Kara is Supergirl, whom he recently accompanied to the Phantom Zone. And it looks like he's going to keep the secret, which should, finally, endear him to readers.
Solomon Grundy, born on New Comics Wednesday, takes the Validus role in the Emerald Empress' ersatz Fatal Five, with Magog, Indigo and Supergirl movie film baddie Selena mapping onto the Persuader and, er, well, Indigo is an android and Tharok was half-robot, so maybe... And that means Selina is the Mano equivalent, because witchcraft is just like being able to disintegrate things with your hands. Or something. Anyone?
If Orlando is ever snapped up by the TV show to write Cat Grant dialogue, I'd not be surprised, as he captures her voice superbly. Mind, her professed idea that citizen journalism means 'no spin' makes her look like an idiot - let untrained people upload anything they like and your platform becomes worthless right around the time you get sued. User-generated content has to be curated.
Oh dear, you find an old hack riding on Comet the Hobbyhorse, back to the comic...
... am I the last to notice that the Ordman Building is a tribute to former Superman creatives Jerry Ordway and Marv Wolfman. Can we expect the Wolfway Tower sometime soon?
The Emerald Empress, often the cruellest of villains, could make a great antagonist for Kara - this is not a woman who can be rehabilitated. And if she has her team attack Supergirl en masse, that could be all she wrote - magic alone is a massive threat to the Girl of Steel. Was it Selina who impersonated Cat at the start? Last issue the energy surrounding the bullet was green, hinting at the Empress or someone using green Kryptonite, this time it's purple, implying Indigo, aka Brainiac 8. Which colour is correct?
Kara deciding that school takes precedence over figuring out who attacked her makes no sense; yes, education is important, but if someone is striking out at National City's protector, that someone is planning something big. The out-of-control powers notion is a bit of a Superman Family tradition - my favourite instance being Superman #321 which, coincidentally, also featured Grundy. 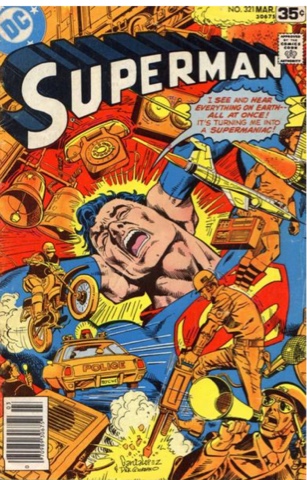 Robson Rocha joins this series with this issue and his pencils, inked by Daniel Henriques and coloured by Michael Atiyeh, look wonderful. Supergirl looks older than previously in this series, more like she did before the relaunch; the fragile doll has been replaced by a sturdier specimen. I like Rocha's compositions a lot, he beings a terrific sense of motion to proceedings, and as for his ability to capture emotion, just look at the curl of Kara's lip in the final panel of the Ben Rubel sequence, above.
The double-page reveal of the Fatal Five is stunning, I just wish the individual names weren't given so much prominence on the art - it somewhat flattens the excitement, making an action breakout panel seem like a Who's Who entry. There's a delightful sense of Calista Flockhart in Rocha's Cat Grant. Previous Supergirl artist Brian Ching has moved onto the Gotham City Garage series, I hope Rocha sticks around. 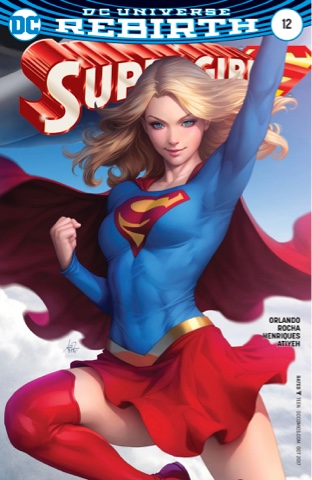