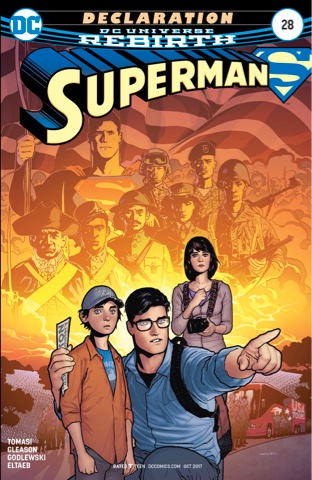 The Kent family conclude their Independence Day trip around US heritage sites, giving and learning lessons and, finally, attempting to help a very patriotic family.
Specifically, they're in Washington DC, starting with a trip to the Capitol Building, where the value of protests is noted. 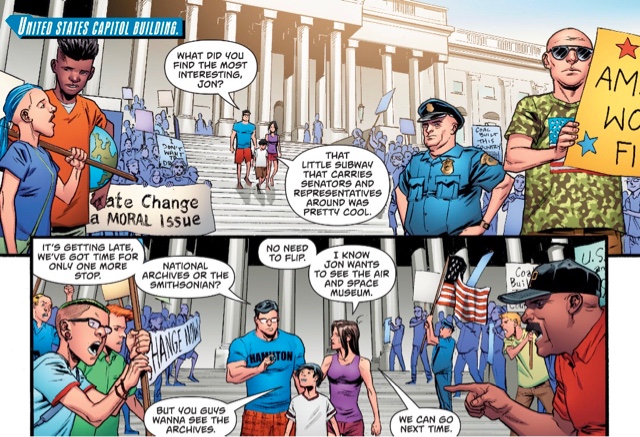 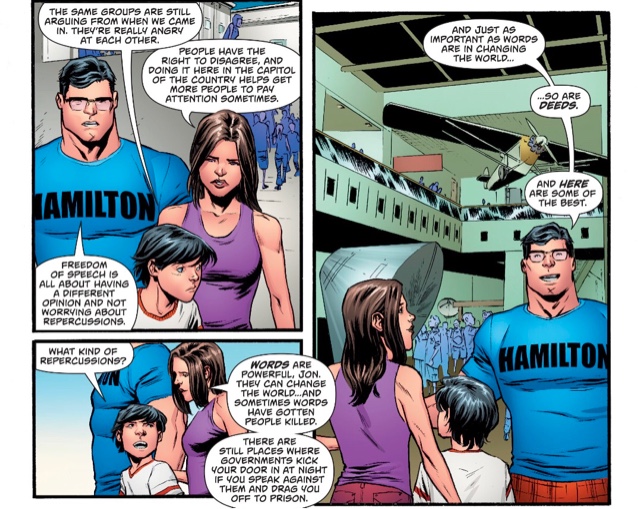 Then it's a visit to the Second World War Memorial, for a big old hunk of history. 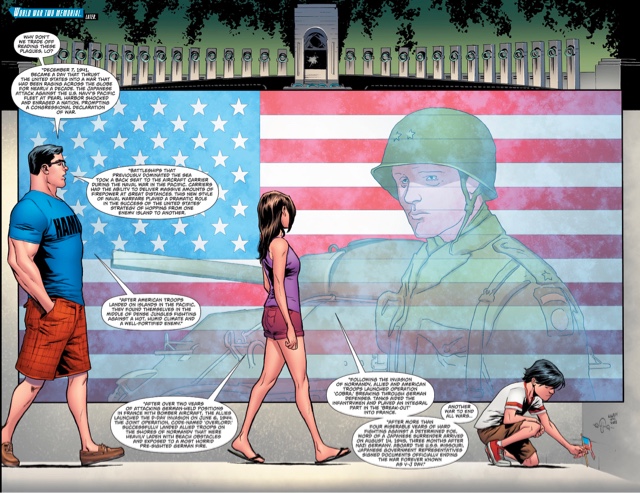 It's unnamed, but I think it's the Korean War Veterans' Memorial where Lois tells Jon about his great-uncle. 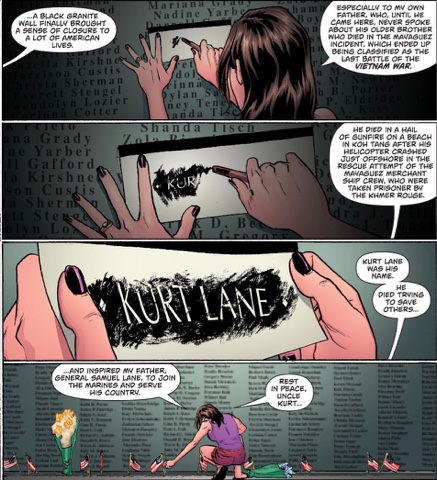 A high-flying visit to the Lincoln Memorial is another chance to recite. And finally, the Kents talk ghosts in Gettysburg National Military Park. 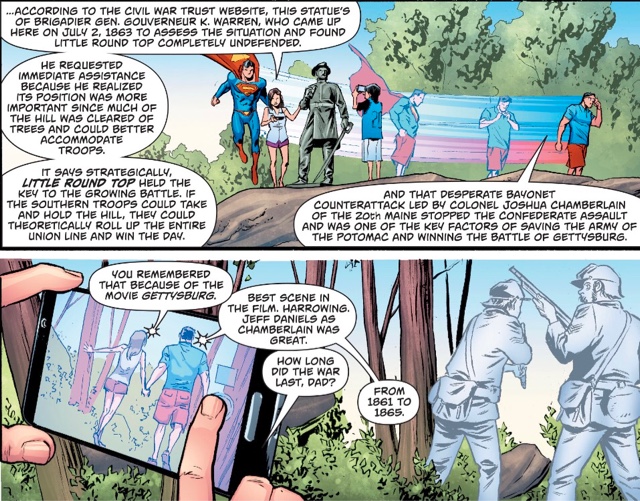 Afterwards, they get lost, but soon make some new friends. 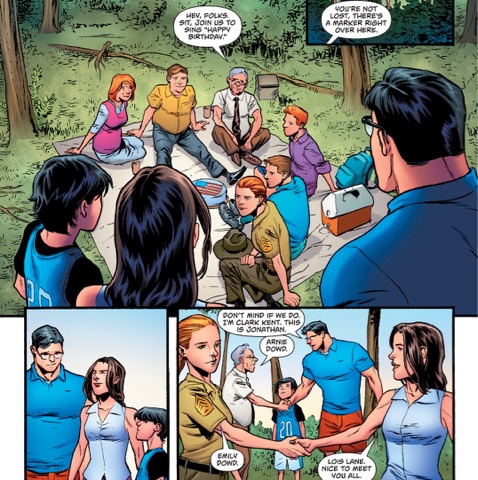 The Dowds are remembering an ancestor killed in the Civil War. 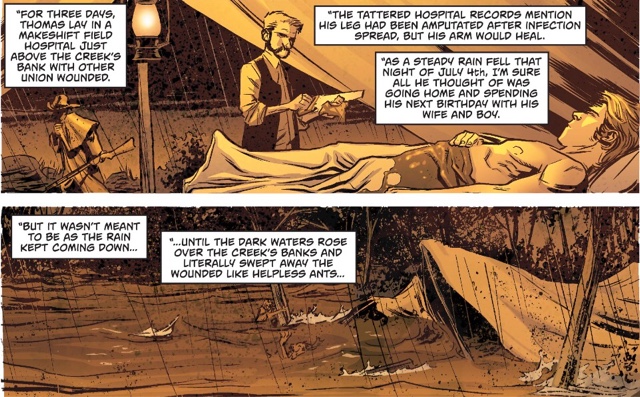 Sadly, the body of Thomas Dowd was never found...
... you may guess what happens by story's end - let's just say 'closure' and 'creepy' and leave it at that, as I don't wish to spoil the whole issue. It is good, though, that Superman does something other than recite, or hear, history.
Last issue, I enjoyed the history lesson. I know it was a tad on the nose for some people, with its focus on the past and patriotism, but it was different and I'm all for younger readers getting the occasional lesson in civics, and us oldies a reminder.
This though, was a rough read for me. Actually, I stopped reading during the longer recitations, I wanted to be entertained with my lunch and it was just too darn dry. And I can't imagine many kids making it through those passages. Is Jon really awake when he's sticking that flag in the ground?
I do try not to be backseat editor, but after last issue's talkiness, the last thing we needed was more, much more, of the same. We'd had the tell, it was time to show. We're talking Superman here, a guy who's been known to travel through time; why not take a vacation in the past and make things really come alive for Jon? Or maybe have Lois meet her Uncle Kurt? There are so many ways this story could have gone that would have been more engaging than page after page of Lois and Clark reading out loud which, frankly, makes them seem weird, like it's their actual hobby.
And there's one big loose end. See that panel in which Clark and Lois introduce themselves? By story's end Superman has done something that only a fool, and a dead one at that, wouldn't link back to Clark. All any of them has to do is find the surname of a Clark married to a Lois Lane and it's bye bye secret ID.
Maybe writers Peter J Tomasi and Patrick Gleason built this 'problem' in as a plot point for a future story - this is comics, with a family that size, one has to be a supervillain.
The craft of the story is as fine as ever - the non-quoted dialogue is great, I cherish the obvious love among the Kents. And the Dowds are convincing. I appreciate that while this story is undoubtedly a tribute to the military, it's not glorifying armed conflict; it's pointing out that people die and discussion is better. The art by illustrator Scott Godlewski and colourist Gabe Eltaeb is a treat, dynamic and open in composition, convincing in the emotional detail of facial and body language. I especially like the flashback treatment, and that 'wall of words' spread is pretty gorgeous. Rob Leigh deserves a bonus for all the lettering he had to do. 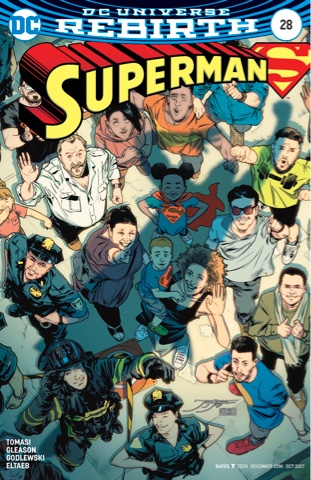 And both covers, the regular by Ryan Sook, and the variant by Jorge Jimenez and colourist Alejandro Sanchez, are stunning, and bound to show up in coffee table books decades from now.
This is a decent comic, I applaud the creators' intentions; I simply wish they'd presented the information in the hugely entertaining way I know they could have.
Alejandro Sanchez DC Rebirth Gabe Eltaeb Jorge Jimenez Patrick Gleason Peter J Tomasi Rob Leigh Ryan Sook Scott Godlewski Superman # 28 review