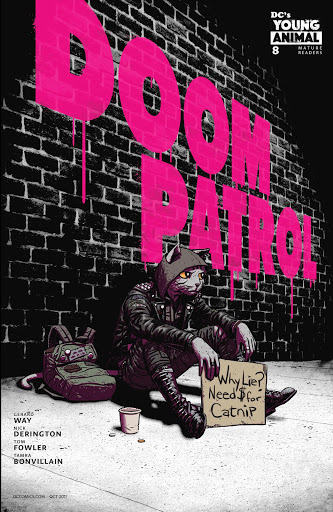 I'm a cat person. That means I have a cat or cats. I've two, actually, Emmy and Milly.

Lotion is a cat person. In Doom Patrol terms that means he's a cat who's somehow evolved into a person. Actually, 'evolved' may be a stretch, given he behaves like a slacker teenager. I'd definitely prefer a regular cat.

Casey Brink, his ‘owner’, maybe not… halfway through this issue she's snogging her previous pet. Yuk. 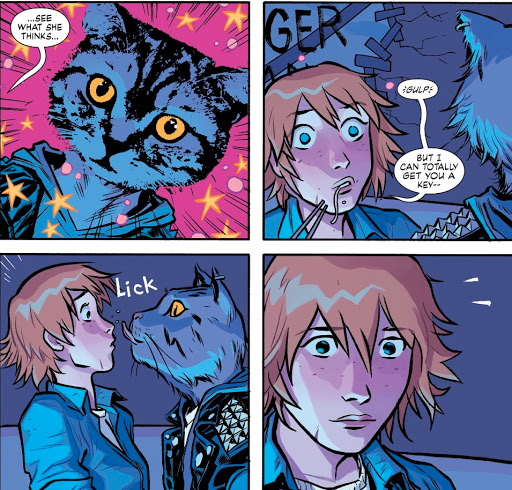 You know who Keeg reminds me of? The Chief, dropping random bits of information that may or may not be true, in order to manipulate people. I don't trust him.

Also, visually he recalls Mr Nobody of Brotherhood of Dada fame, and I'm pretty sure he's behind the scenes, waiting to screw with the Patrol. We have Casey’s flatmate, Teri None; Keeg insisting that Casey doesn't exist, which would make her a nobody; and Terry’s TV ad co-star Eddie Zilch… there's definitely a theme here.

As for what Teri’s advertising, it's that Sh!t food that makes everything taste better, including life. I'm not keen on this plotline because the 'Sh!t' name reminds me of a little kid showing their bum, thinking a bit of rudeness is clever…

I'm even less keen on the interlude with good guy paramedic Sam and his recently returned wife Valerie - she wants to find herself, he feels that as they've just found one another after four years apart they should be getting to know one another again. Then there's their son Lucius, who's a would-be devil worshipper and beyond tedious. Given how little panel time the actual Patrol members have had over the first several issues, I could do without the Reynolds family soap - if they're not interacting with the Patrol, why are they taking up page time?

My love for cats aside, I'd also like Lotion to go away, I just don't like the vibe he gives off. Which may be the point, but does the DC Universe really need another cat person, and a millennial at that? 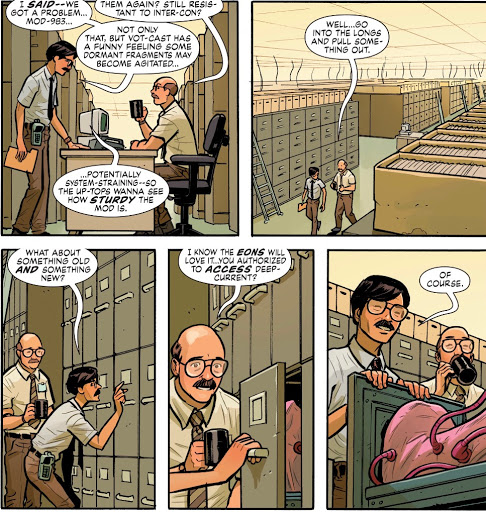 The worst thing in this issue is the opening scene, which features a couple of workaday types who look after people who dream, when they should be dead. There may be a connection to Larry’s state, but I'm too irritated by the meaningless dialogue writer Gerard Way gives them to care.

This may well be a very good issue of Way’s Doom Patrol, but I'm not sure I'm the audience for it. I've little patience for the really slow plot development - I admire Way’s capacity for tossing ideas everywhere, but I want a tighter focus. I want characters to just stop accepting things - Casey not pushing Lotion on why he's now a humanoid cat, Cliff going along with Keeg as all-purpose scientist despite doubts, Casey eating the obviously odd Sh!t because Teri suggests she does - and show a bit of agency. 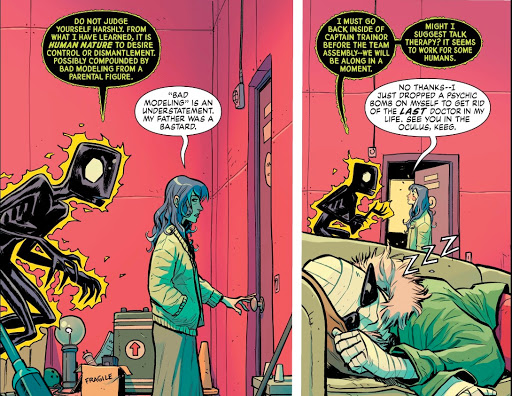 Only Jane seems to be really thinking for herself. If things don't pick up pace soon, I may be exiting Danny the Ambulance.

Nick Derington pencils this issue, with Tom Fowler jumping on board as inker; Fowler has a distinctive style when he's illustrating comics, but he subsumes that for the sale of continuity, which is rather gracious. I'd love to see Fowler fill in, solo, sometime. I'm sure Way could write a script to suit his talents as well as he served Mike Allred last issue. 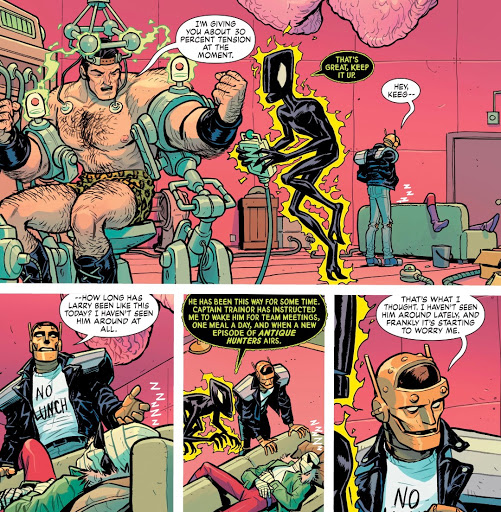 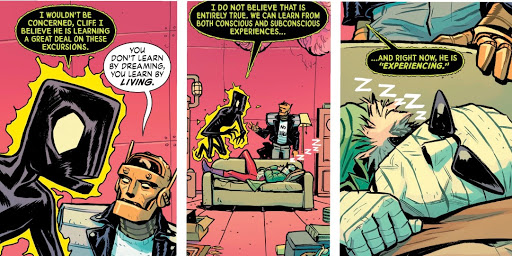 My favourite page sees Flex Mentallo being tested for something or other by Keeg - ‘Geek’ backwards, is that significant? - due in part to the wonderfully relaxing colours of Tamra Bonvillain. 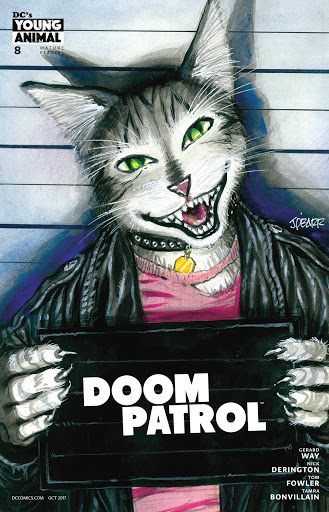 Derington’s cover is clever, though I like the logo placement more than that darn cat, while James O’Barr’s variant is freaky. Well done, but that is one creepy cat.

I used to be a cat person…