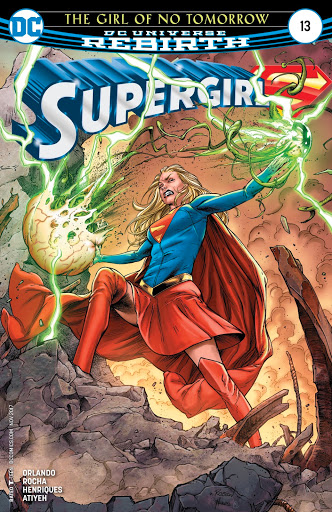 Well, this issue proved to have more ramifications for Kara than expected.

Part three of the Girl of No Tomorrow story, it concludes the Fatal Five's visit to National City. As we join her, Supergirl is fighting the Emerald Empress to protect the populace, but she has an image problem. 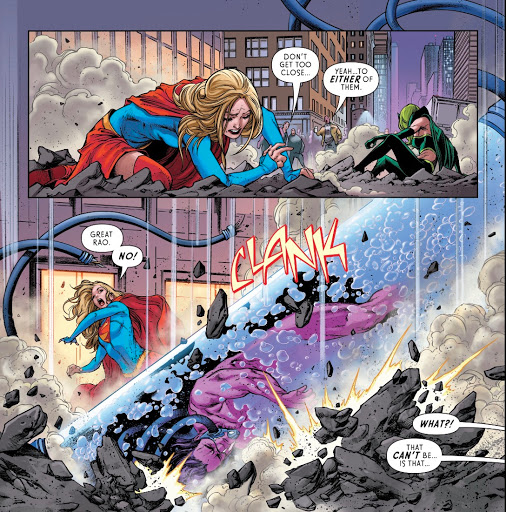 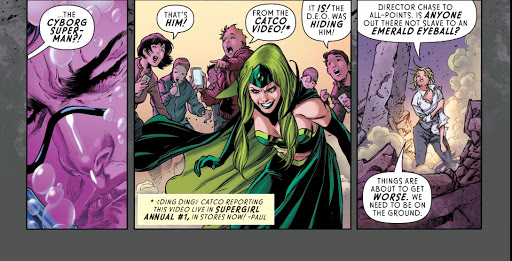 Outside the city confines, enemy turned ally Lar-On, the Kryptonian werewolf, takes on Fivers Selena and Magog, and there proves to be no honour among witches and would-be godlings. 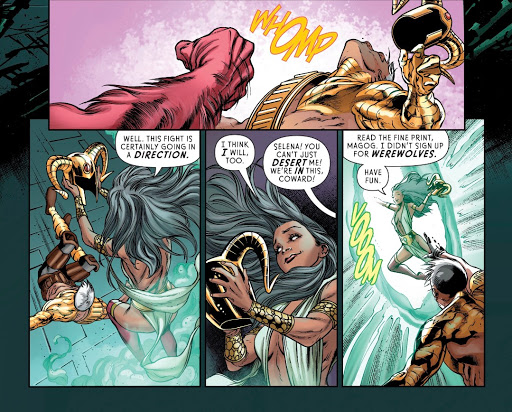 While Cat Grant and Ben Rubel take down the viral video that's wrecked Kara’s public image, our heroine shows Emerald Empress she's not the terrible person she believes Supergirl to be. 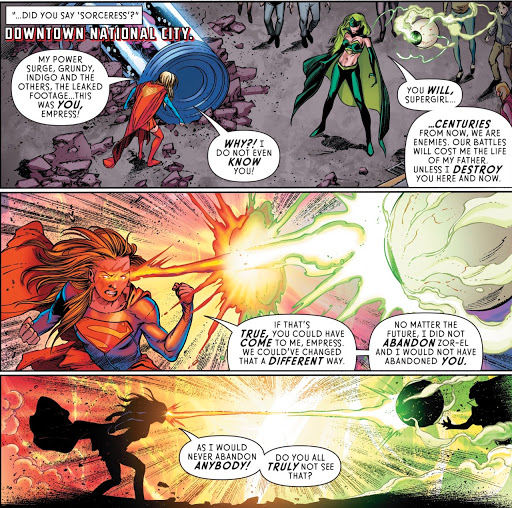 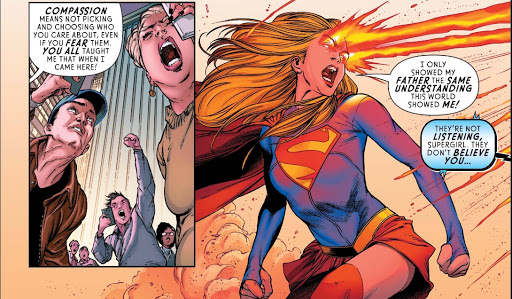 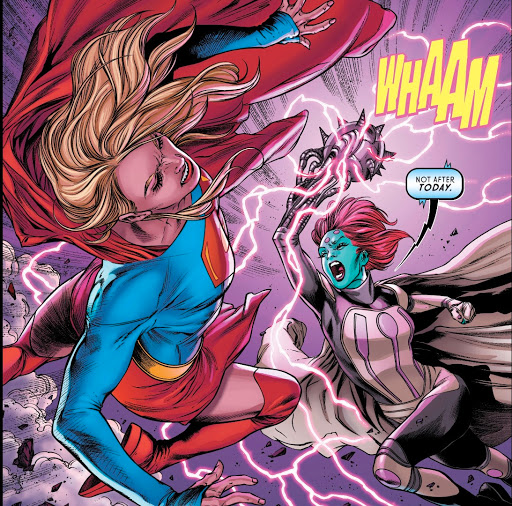 And she does rather well, until Kara gets help from an unexpected quarter…

By the end of this issue, a thoroughly entertaining collaboration between writer Steve Orlando, penciller Robson Rocha, inker Daniel Henriques, colourist Michael Atiyeh and letterer Steve Wands - the set-up this series has had for the last year has gone. Cameron Chase leaves a DEO she finds to be corrupt and is replaced by a less benevolent figure. The Danvers quit their super-spy jobs in support of her. Cat Grant goes from Supergirl’s biggest fan to her most vocal critic. And the public remain divided on whether they trust Supergirl.

None of which stops us getting a final page that has me grinning from ear to ear.

The Fatal Five fight is fun, but frustrating. Saturn Girl, whose mystery mission to the 21st century presaged the Empress’s vendetta against Supergirl, remains resolutely offscreen. We do get a mention of her by the new DEO director, but come on DC, give us Legion of Super-Heroes fans more than a bone.

While Kara thoroughly ends the threat of the Empress for now, she's left in position to be a future foil for Supergirl - good! Similarly, Selena will likely be back. As for Indigo, Magog and Grundy, they're all established DC villains, they'll make a comeback somewhere.

As for Kara’s newly increased powers, she mentions them but there's none of the struggle to control her new levels, as in the annual - I suspect they'll be forgotten about, left to quietly fade.

The status quo changes surprised me because while they're not totally inorganic to the story, they're far from inevitabilities. Chase and the Danvers would as likely stay and fight as quit the DEO. Cat would almost certainly see Supergirl’s point of view, after treating her to a biting lecture. And the public being fickle, they'd be fine until next time Kara was made to look bad.

But, Supergirl #15 in a couple of months is co-written by Orlando and Jody Houser, which likely means Houser is taking over full-time soon. It could be she wants a more suburban set-up… and it could be I’ll like that a lot. I've never been a big fan of Supergirl as agent of anyone, the cutting of direct DEO ties opens the book up to other types of tales. The new Director looks set to be a presence, but he doesn't have to be the overarching antagonist.

Whatever the direction, I hope the current art team remains, this book has taken a massive leap forward visually of late. Rocha has a real gift for dynamic layouts, Henriques provides a sharp finish, Atiyeh adds vibrancy with his colours, and Wands’ work is ever attractive. As for Orlando, he manages to make Kara inspirational without her sounding like a preacher. 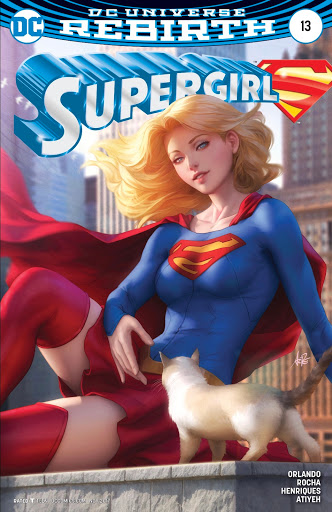 The main cover by the interior art team is decent, though not as attractively composed as many interior moments. The alternate, by Stanley ‘Artgerm’ Lau, is gorgeous and has apparently sent sales shooting upwards but come on, if we're going to have a cat, I want Streaky. Plus, that face looks like no Supergirl I've ever seen, it's more Calista Flockhart than Melissa Benoist. Oh, and I wish editors Jessica Chen, Paul Kaminski and Eddie Berganza would nix the Salkind logo treatment, it makes a classic style seem utterly dated.

This is a very good issue, but not a great one. The sudden status quo changes, the lack of real progression on the Legion front… they somehow took away from my overall enjoyment. Still, it's great that we're regularly getting a Supergirl comic of such high quality that little niggles can take away from the overall enjoyment.