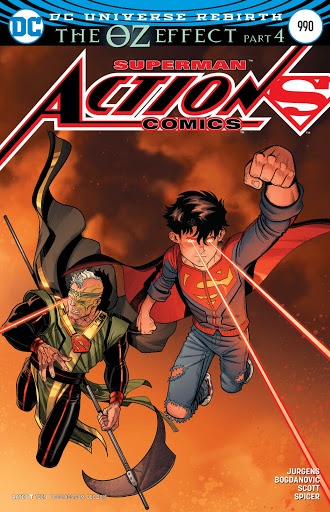 It's a case of infinite crises on Earth as Superman tries to stay on top of the conflict that's broken out everywhere. This fourth chapter of the Oz Effect opens with Superman back in the nation of Logamba, where the rebels and authorities - influenced by Mr Oz - look set to destroy one another. Time for direct action straight out of the Golden Age playbook. 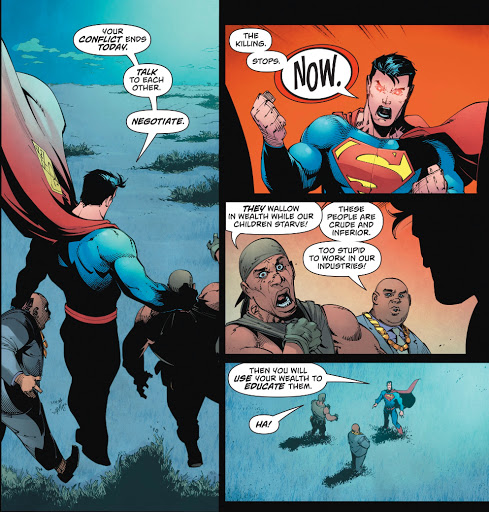 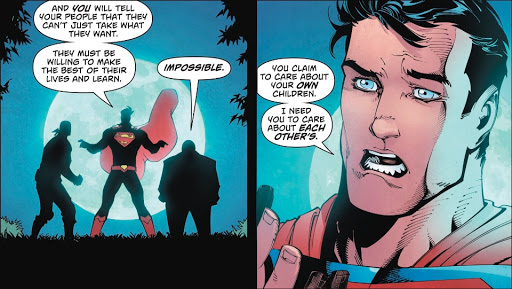 Whether Superman's intervention will presage a long-term solution, time will tell, but for now, the citizens are a lot safer than previously.

Back in Metropolis we see that, astonishingly but happily, Steve Lombard has survived last issue's shooting to once more rock those short shorts he wears. 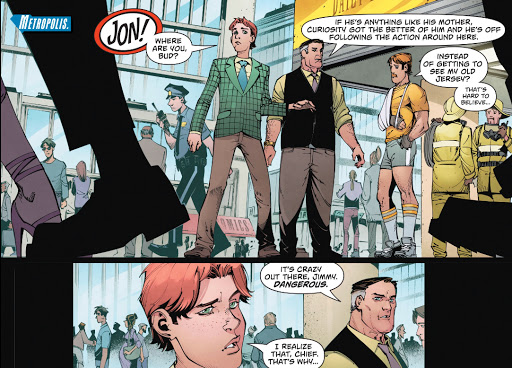 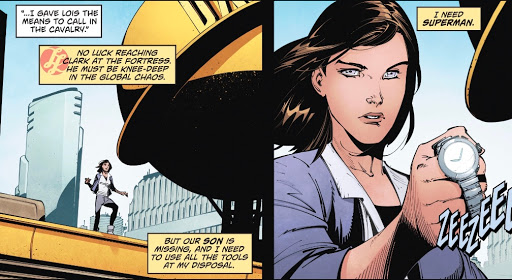 I thought Lois didn't need a signal watch, that Superman was tuned into her voice at all times; I suppose she's covering all the bases in her search for son Jon. 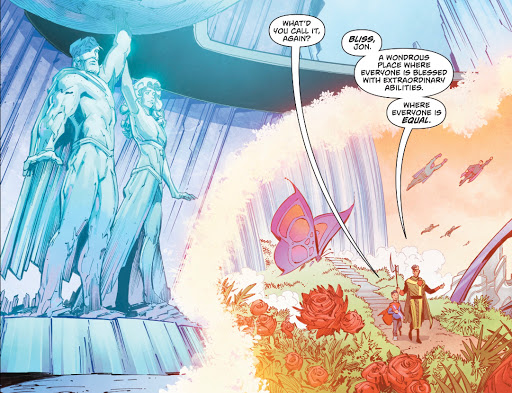 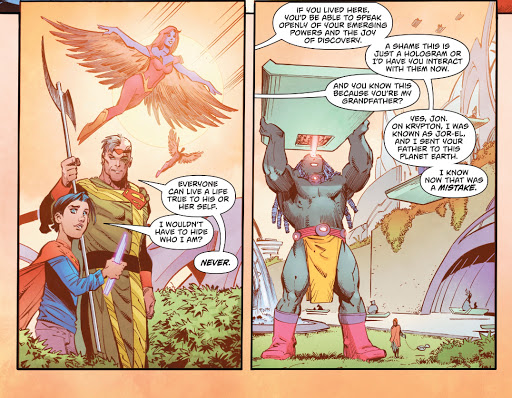 Speaking of whom, he's getting to know Grandpa Jor-El - or at least Mr Oz, who claims to be the father of the Last Son of Krypton. He's trying to get Jon on side with seductive tales of a world of super-powered folk, and frightening hints of what's to come. As his parents' son, Jon doesn't easily accept Mr Oz's story - heck, just calling a place Bliss screams Fake. But brains and powers aside, he's only a kid and might just buy what Mr Oz is selling.

As he zooms towards the source of the signal watch summons, Superman comes across Janet, the mystery woman from last issue, and other Oz cultists. 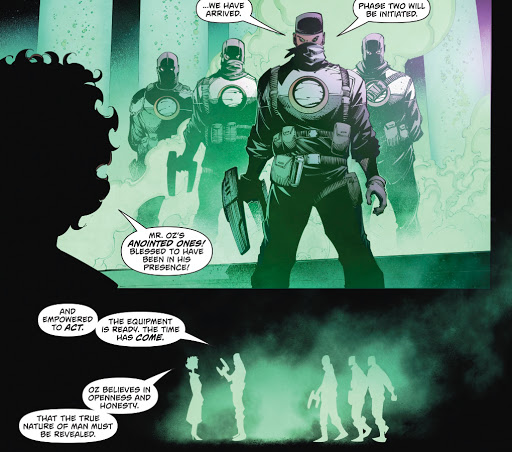 Honestly, Janet sounds like the world's most depressing speak-and-spell doll, parroting whatever Oz has told her. It's wonderful to see our hero set her right about a thing or two.

This is a fine issue all round, with writer Dan Jurgens progressing the story by pushing Jon towards a more reasoned disciplehood with Mr Oz than that of Janet. While Mr Oz could easily be Jor-El, trying to save his family, there's no getting around the fact that his murderous actions are a massive, insurmountable, obstruction towards getting Superman to stand alongside him.

Mr Oz is a lying scumbag - but I really like this exchange with Jon. 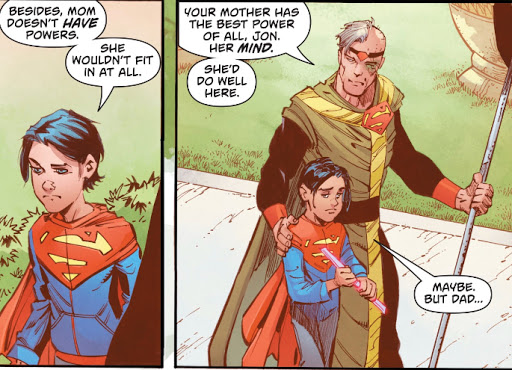 Other passing moments of note include Superman's laying out the whereabouts of Supergirl, New Super-Man and the Justice League, his choice of forename or hero name hinting at who’s a friend and who’s a colleague; and his simplistic, heartfelt plea to the Logamban leaders. And while I still miss thought balloons, but there's no denying Jurgens has a deft touch with his internal narratives, especially that of Superman.

Bringing Jurgens' words to life is penciller Viktor Bogdanovic, whose dynamic compositions help sell the intensity of events. I like how he occasionally shadows Mr Oz, hinting that he has the blackest of hearts.

Sometimes he inks himself, at others Trevor Scott and Scott Hanna provide the finishes, but every page looks great. My favourite image is a powerful splash that shows how imposing a figure as usually friendly as Superman can be. 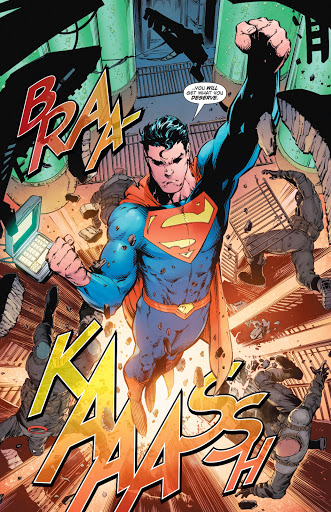 The bold colours come courtesy of Mike Spicer, while Rob Leigh, as ever, provides the sharp lettering. 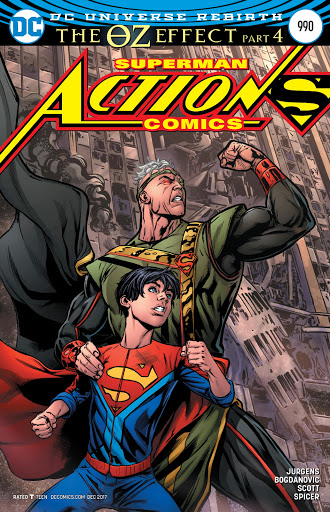 Both the regular cover by artist Nick Bradshaw and colourist Brad Anderson, and the alternate by Neil Edwards and Jeromy Cox, nicely tease the Oz/Jon situation, but I much prefer it when variant and regular cover start from different concepts.

And that's a tiny quibble, in no way preventing me from recommending this latest chapter. I'm ready for the Mr Oz storyline to wrap, but meanwhile I'm very much entertained.