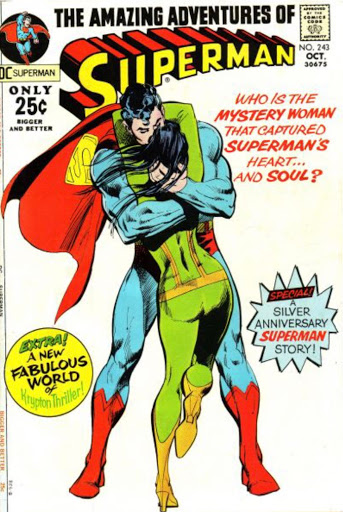 It’s 1971 and Superman is having a moment of Relevance. 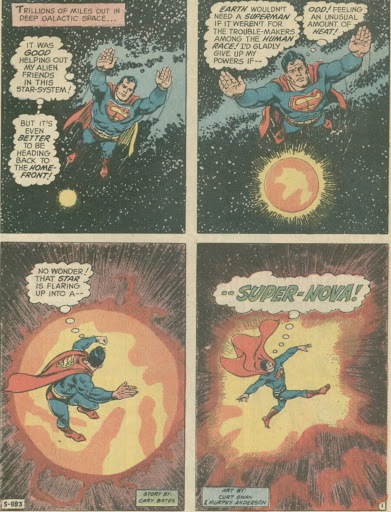 He’s not got much time to ponder life’s big questions as the exploding star sends him somewhere unknown, and Superman feels compelled to dive below the surface of a mystery planet. 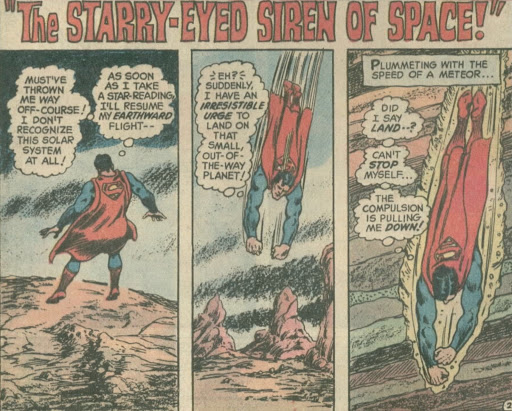 There he meets an unusual-looking fellow. 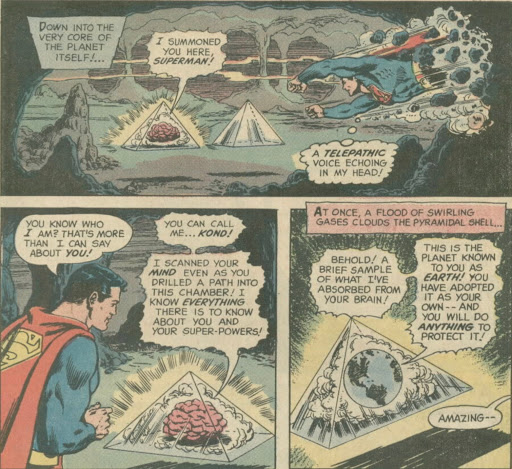 Kond explains that, bored by life as a brain in a jar, his beloved, Rija, has used her powers to take on human form. He refused to join her, feeling the whole idea of flesh was icky. Fearing she’s going to succumb to disease or injury, and knowing that if Rija doesn’t return to him within four hours she’ll be ‘doomed’ to remain mortal, Kond asks Superman to persuade her to come back. And he has a reward in mind. 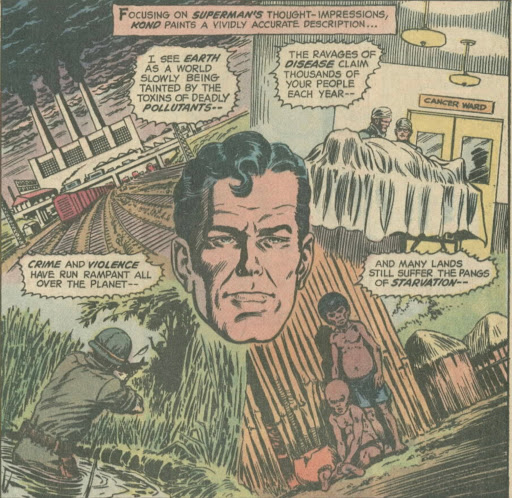 Soon Superman has his first look at Rija and yes, she’s in trouble. 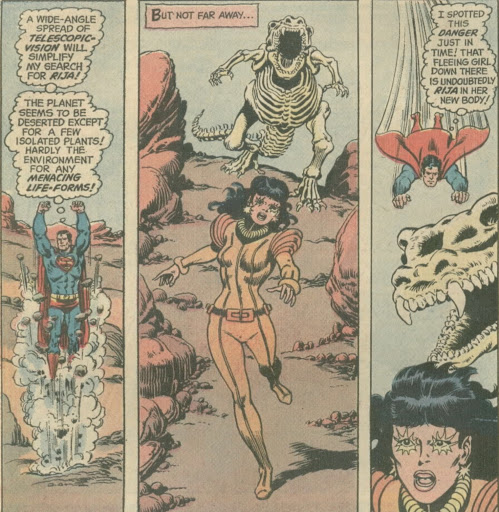 After despatching the weird creature, Superman lands, gets a proper look at Rija’s new form - and a big surprise. 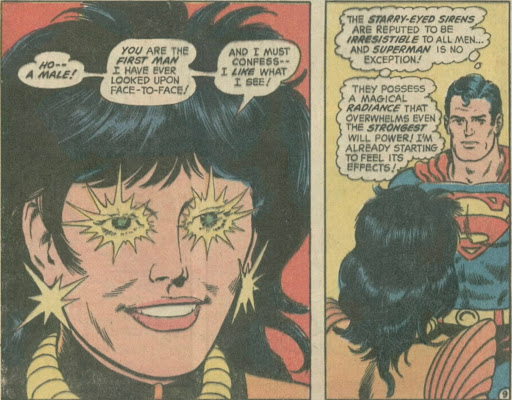 Our hero tries to resist, but you know how he is with magic. 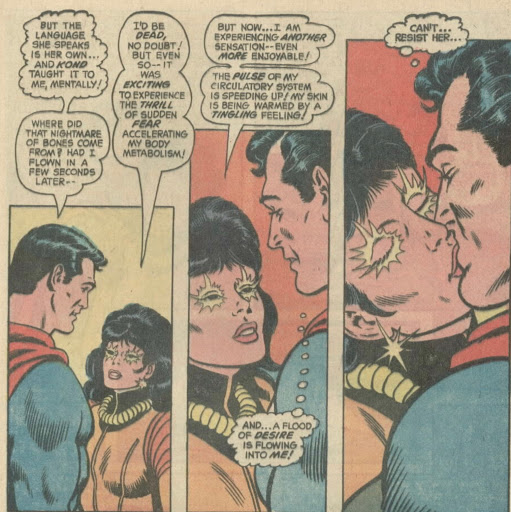 Kond, meanwhile, has gotten jealous and come out of his shell. 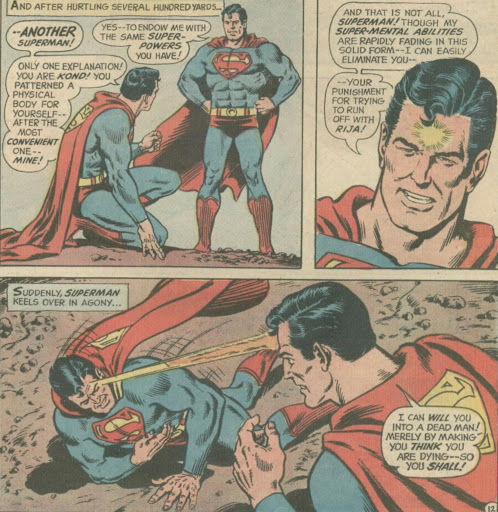 Leaving the stricken Superman, Kond catches up to Rija. 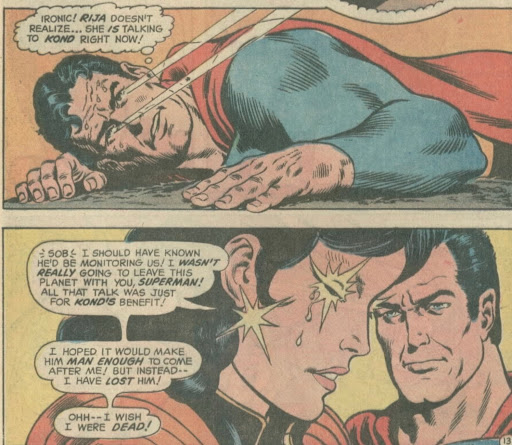 Awwww, ain’t that sweet, in a gameplaying kinda way. Time for more action to banish the soppiness.

The inexperienced Kond is no match for the energy monster; luckily the real Superman has a Eureka moment.

Time for a drastic gamble. 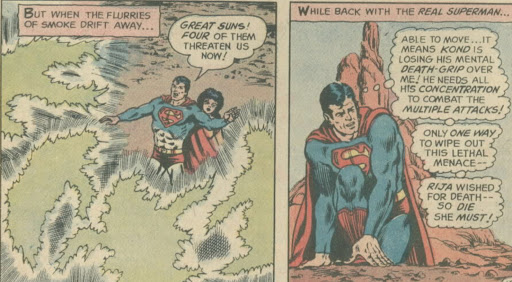 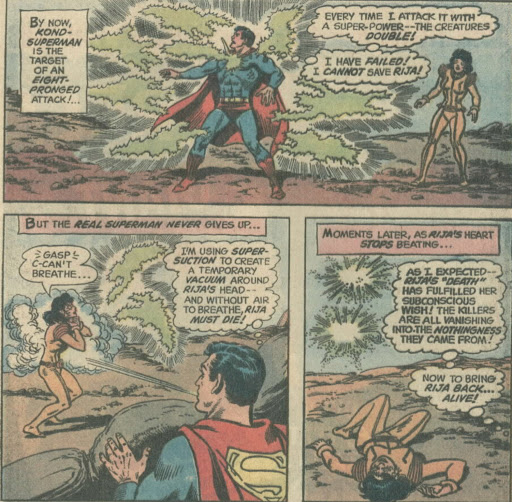 It works, and we head towards a happy ending. 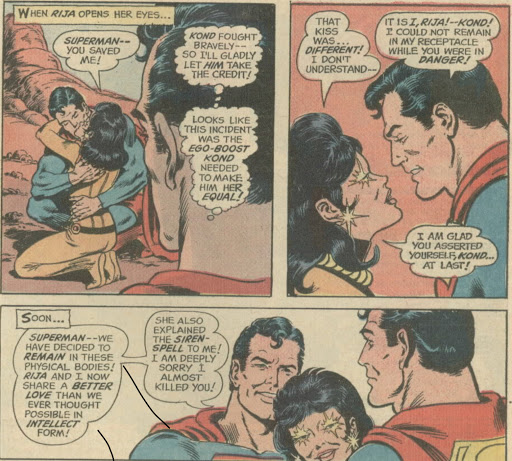 A grateful Kond is as good as his word, whipping up a quartet of potions to wipe out crime, hunger, pollution and disease. 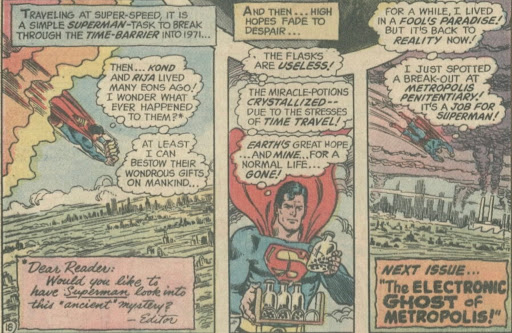 It’s a rather depressing ending to what’s been a rip-roaring Superman adventure. I remember reading this for the first time, as a kid, and assuming Superman would decide not to use the potions under the ‘if Man doesn’t earn his own happiness, it means nothing’ rule. But no, Superman was as ready as any of us would be to save the lives of people in no position to take control of the planet’s ‘destiny’. How a potion could wipe out, in the maddest example, crime, I’ve no idea, but still...

None of which takes away from the fact that this is one of the most memorable DC Comics I bought as a kid. I actually had to pluck up the courage to pick it up and take it to the counter of the local newsagent, given that cover. Drawn by Neal Adams and inked by Dick Giordano, it was the sexiest thing seven-year-old me had ever seen in an ‘American comic’ - as any DC, Marvel or Charlton import was known. Goodness knows what it did to older kids on the edge of puberty.

When you actually see her from the front, though, Rija is less attractive. Penciller Curt Swan and inker Murphy Anderson drew many gorgeous women, separately and together, over their long careers, but the Starry-Eyed Siren of Space isn’t up there. She’s like Space Lois Lane with wider features and a double crown. She’s also missing the girl reporter’s sparky intelligence, due to the fact that we can’t see her eyes properly - the starry eyes that give her siren powers actually make her less attractive to look at. How ironic <choke>.

Still, her curious nature makes for a story of rare cosmic scope. From the opening supernova to the final coloured photo of Earth from space via the montage of planetary problems, this Superman story feels huge. 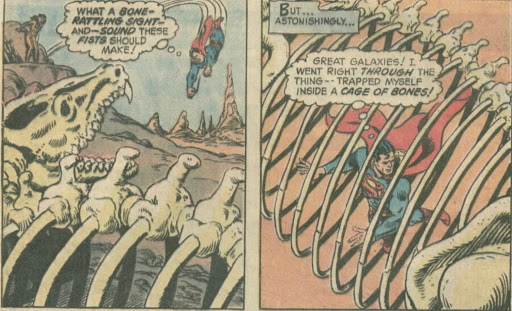 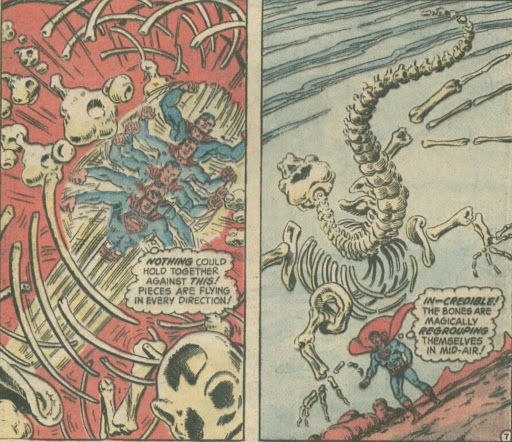 Plus, skeleton dinosaurs! The craft of the ‘Swanderson’ team grounds the weirdness wonderfully, I really can’t fault the art. The unnamed letterer also does a terrific job, the bold emphases adding to the drama.

Superman is his usual noble self, not requiring reward for helping someone, while both aliens are sympathetic and pretty darn human. It’s just a fun read with a downbeat ending, but that was par for the course in DC’s Relevance period.

A nice bit of business from writer Cary Bates is that in the Kond/Rija relationship, it’s the woman who is dominant, and it’s all the better for being no big deal

Did you notice the editor’s note on the final page? 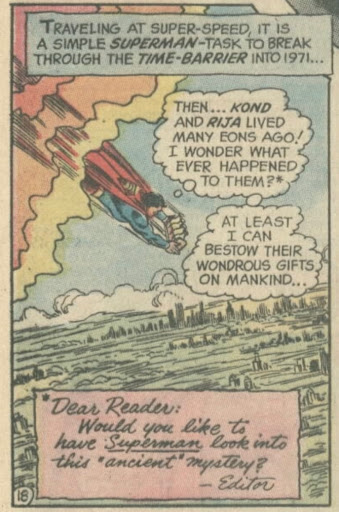 I guess readers weren’t that fussed, as we never saw the pair again. I’d have been more interested in meeting the genuine Starry-Eyes Sirens, they’re begging to show up in a Star Sapphire story.

A couple of last words on the cover. It was homaged in the Eighties by Ed Hannigan and Mark Texeira for a most surprising series. 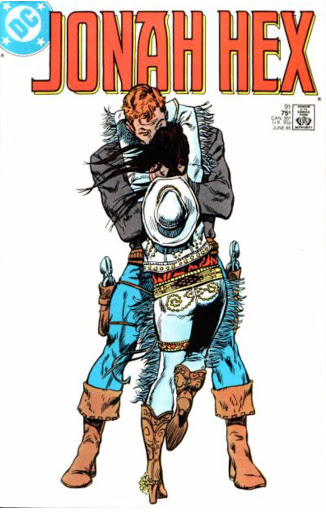 And thanks to Steve in the comments,below, I now know that Adams himself homaged it a couple of years back! 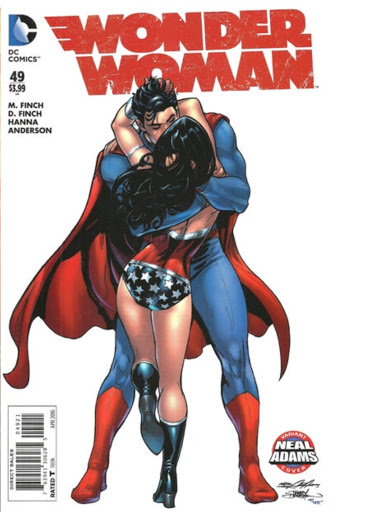 And it wasn’t used for a reprint in Egmont UK’s black and white reprint package, The Superheroes, which always opted for original painted covers. 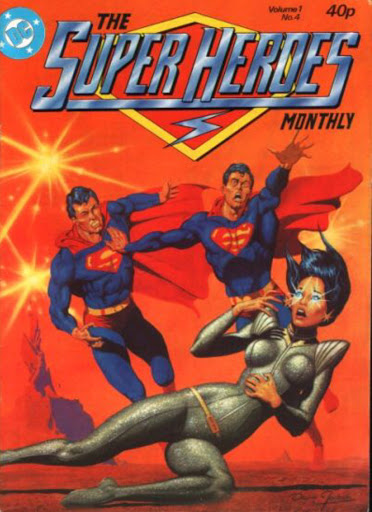 Superman #243 appeared during DC’s 52pp giant period, meaning that as well as a back-up there was a reprint. The new story is a Fabulous World of Krypton piece explaining why the planet has dangerous sky trails. 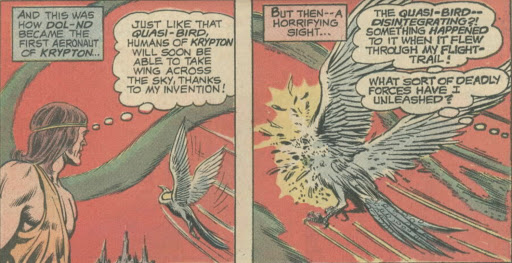 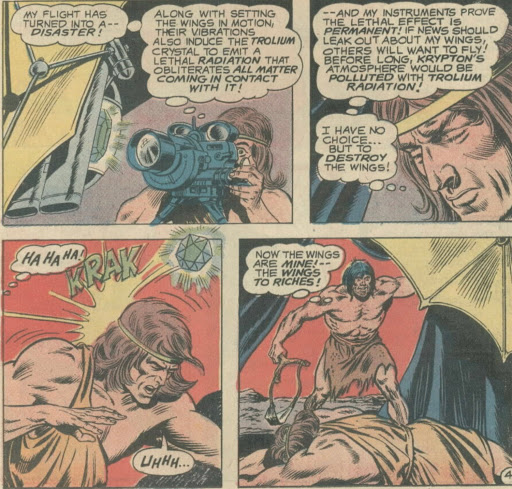 The reprint is a fascinating curiosity, originally presented in 1946’s Superman #38 but prepared a couple of years earlier. The War Office got wind of the story’s subject matter and had it pulled.

Had it been published as planned, it would, of course, have predated the surprise attack on Hiroshima which presaged the end of the Second World War. Supposedly writer Don Cameron came up with the term ‘atom bomb’ independently from the authorities. Spooky coincidence aside, it’s a cracking yarn, with Luthor extra-evil and Lois and Clark at their Golden Age screwball comedy best.

Terrific art, too, from Pete Riss and George Roussos. This Luthor panel is especially striking. 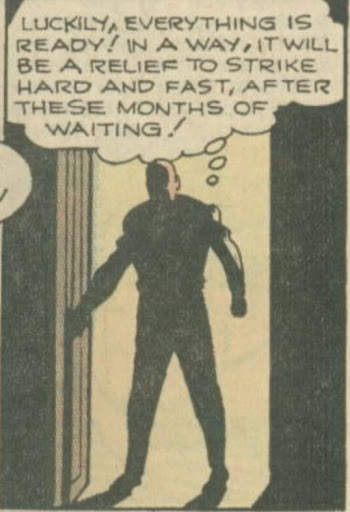 Add on a feature page of ‘Famous Firsts’ ... 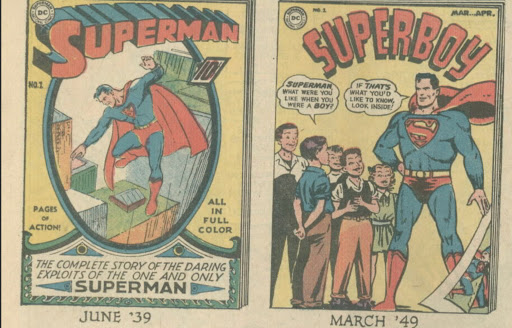 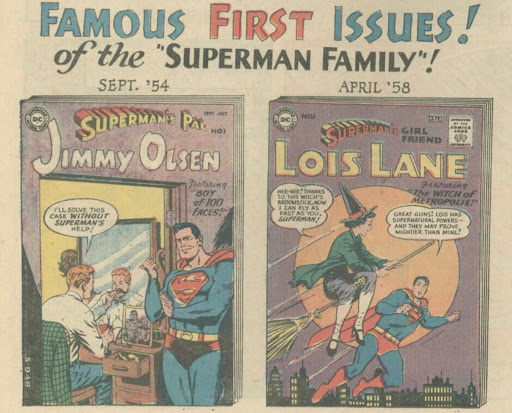 ... and two separate letter pages, and you have one of the most satisfying single issues of the Bronze Age - if you see it at a reasonable price - as I did in Quebec recently, this would be about £9 - snap it up! 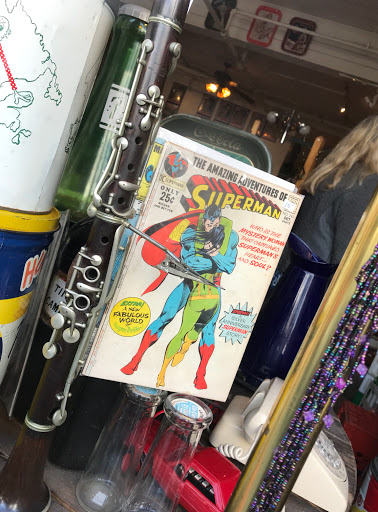