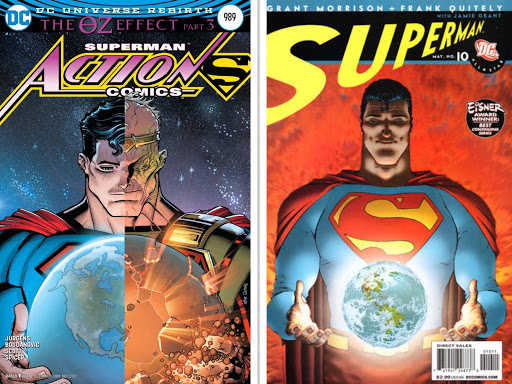 While Mr Oz continues his attempts to persuade Superman to abandon Earth... ... two of his agents have dark intentions for the Daily Planet. Lois tries to reason with the man, JB - who’s bought into some Trumpian ‘fake news’ agenda - stall him long enough for Clark to come and save the day. Sportscaster Steve Lombard is more into direct action, and pays the price. 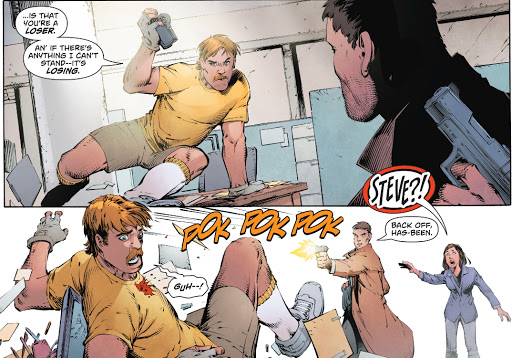 Jon Kent, meanwhile, who’s been visiting the newspaper, is itching to help out as Superboy. 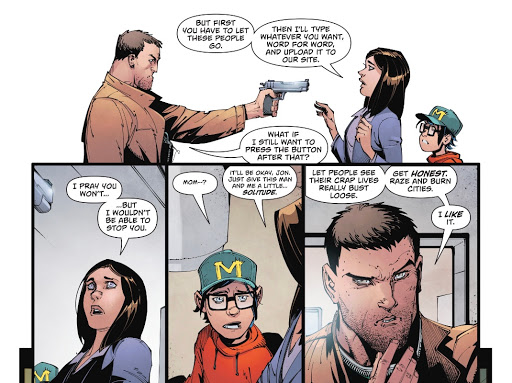 While Superman deals with the worldwide chaos sparked by Oz’s agents, Lois gets an unexpected helping hand. 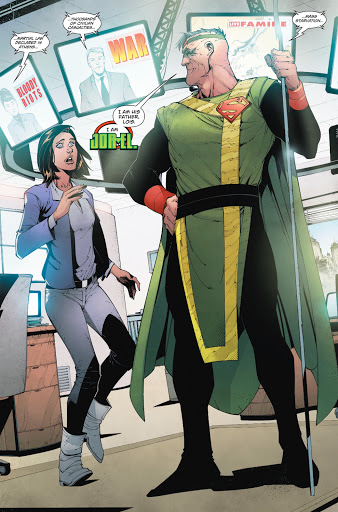 Mr Oz, who claims to be Superman’s birth father, uses Superman’s absence to try two new fronts in his campaign to steal Superman away from Earth - first Lois, then Jon. He tries different approaches for mother and son, assuming Jon is the weaker link. Writer Dan Jurgens’ dialogue is especially good this issue, starting with probably the first ever use of ‘pabulum’ in a DC comic and moving onto a delightful diss of Damian Wayne.

Entertaining as Mr Oz is as he plays Machiavelli, we mustn’t forget he’s busy engineering the deaths of thousands - hardly Grandpa Walton. I can’t see any of the Lane-Kents falling for his guff

This chapter of The Oz Effect is a treat for me as a lifetime member of the Daily Planet fanclub, with Perry, Jimmy, even Silent Jacquee, having roles. As for Steve, it’s good to see that, blusterer that he is, he’s nevertheless a courageous soul. Who’s to say he couldn’t take out JB - interesting initials, those - with a sticky tape dispenser, those things are heavy! It’s Clark, Lois and Jon who are the stars of the show, though, each gutsy and steadfast in their own way.

Victor Bogdanovic, this issue, works over Jurgens’ breakdowns, adding a super-animated feel to the solid layouts. Bogdanovic is aided on inks by Trevor Scott, while Mike Spicer colours, his choice of a red overlay on the splash page a smart choice to alleviate the horrors depicted. Rob Leigh, as ever, does a fine job on the letters. 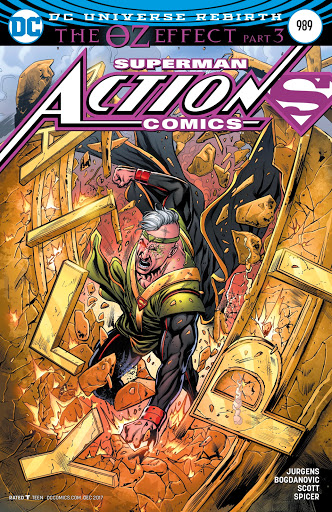 I’m not terribly keen on Nick Bradshaw and Brad Anderson’s cover homage to All-Star Superman #10, that chin shape was weird enough when Frank Quitely did it... I prefer Neil Edwards and Jeromy Cox’s Mr Oz-centred alternate. You can’t beat The Planet globe getting smashed.