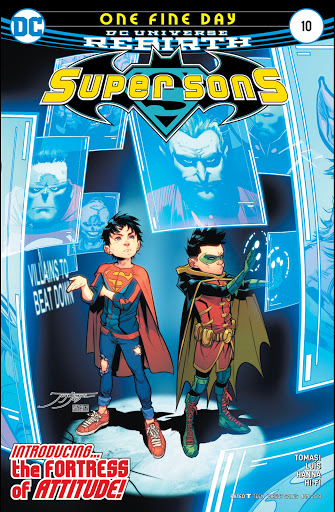 The family has moved to Metropolis but Jon Kent and dad Clark are back in the countryside, with their friends Damian and Bruce Wayne. 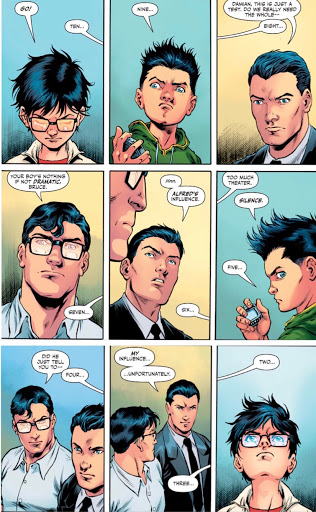 They’re testing Jon’s powers, which are kicking in by the day. 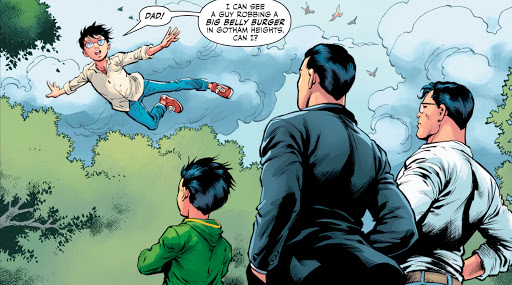 The kind-hearted Superboy wants his pal to share the experience of flight, providing a poignant moment. 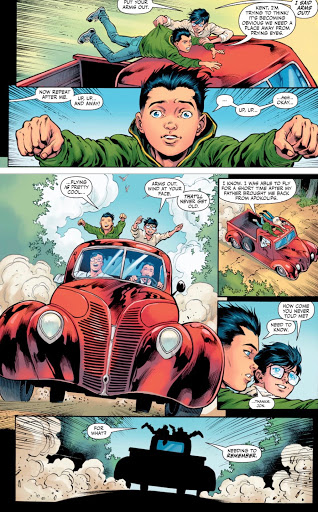 A few weeks later, Batman and Superman have a surprise for the diminutive duo. 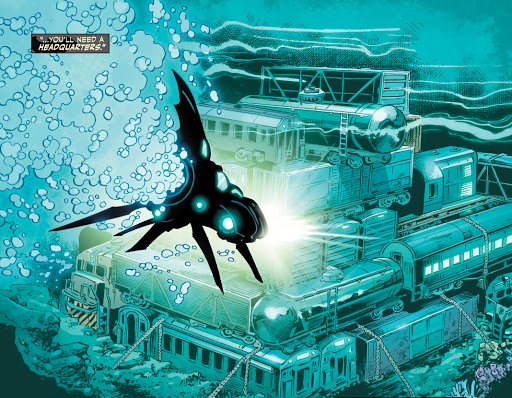 And they get wonderful toys. Damian appreciates the 3D batarang printer, teleport tubes and mission monitor board. As for Jon. 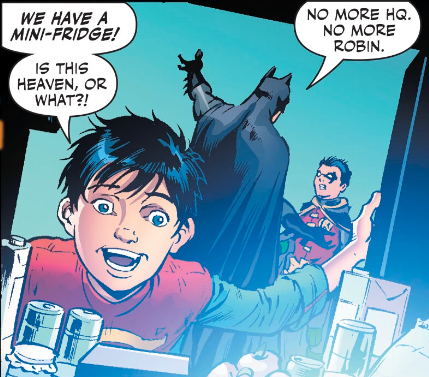 Damian is a tad suspicious, though, believing this ‘Fortress of Attitude’ has to come with a catch. And it does.

After the last several issues fighting a sentient cannibal world, Damian and Jon get to relax. The opening scene is a delight, though it’s maybe a little too Jon-centric... Bruce and Clark might have made it a joint training session, invited Damian to show off the new tricks he undoubtedly has. To his credit, Damian shows no resentment, and when Jon treats him to the world’s cheapest flight simulator he doesn’t try to hide his emotions. I began this issue suspecting Damian’s short time with super powers had been Rebirthed away, but writer Peter J Tomasi doesn’t let me down, using that bit of backstory to enrich the boys’ friendship. (I wonder if Clark and Damian have sat down to swap memories of being dead - I’d find it an irresistible opportunity.)

I’d make a terrible superhero - the idea of an underwater HQ would terrify me, but Superboy and Robin are thrilled at their new base, cobbled together from old railway carriages. It’s the ultimate den for non-claustrophobic super-adolescents.

One great thing about Damian and Jon’s burgeoning friendship is that as well as making the current Robin more human, it gives Clark and Bruce a chance to hang out without having to worry about saving the nearest multiverse.

As ever, Super Sons is choc-full of pitch perfect humour, and this issue’s best of a great bunch goes something like this. 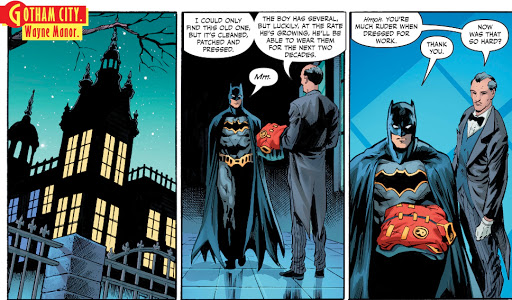 What’s not wonderful is a scene I’ve neglected to mention. Well, it’s wonderfully well crafted but it doesn’t thrill me. In a two-page ‘Intermezzo’, future Damian Wayne from Grant Morrison’s Batman run pops up in the present day, picking up right where he left off. I hugely dislike dark, grown-up versions of kid heroes hailing from distant dystopias. I know Tomasi and regular artist Jorge Jimenez will entertain me when this alternate Batman’s story gets properly underway, but I wish we could just keep away from depressing visions of the future.

As implied above, Jimenez isn’t drawing this issue. In his stead we have Jose Luís pencilling and Scott Hanna inking. As you can see, the results are pretty wonderful. There’s personality aplenty etched on our heroes’ faces, the storytelling is crystal clear and the backgrounds solid. I particularly like the little details, such as Bruce’s jacket flapping outwards as Jon speeds around him, the Superboy and the Ravers #15 poster on Jon’s bedroom wall and the way Damian stretches up towards dear old Dad when he’s irked. 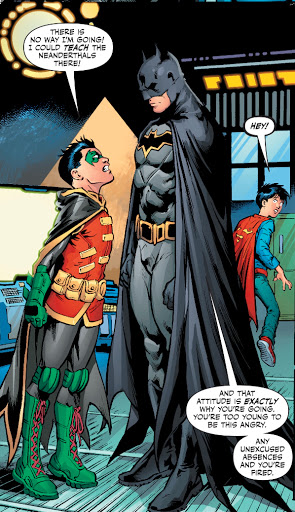 The colours of Hi-Fi set and underline mood as required while Rob Leigh’s letters are as bouncy and subtle as usual. 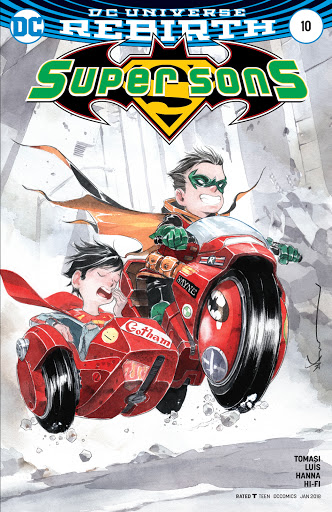 There’s a very likeable main cover by Jimenez and colourist Alejandro Sanchez and another fun variant by Dustin Nguyen. It all makes for another splendid confection from Tomasi and co. Why isn’t this one of DC’s fortnightly books?