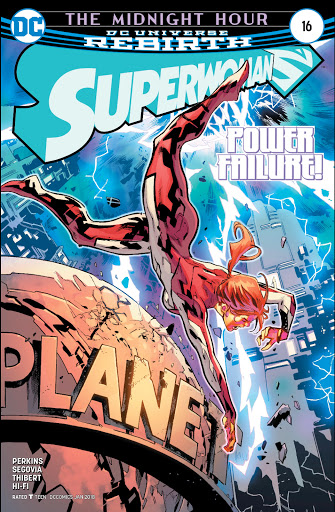 The mysterious Midnight has stolen Steel, sucked John Henry Irons through one of the mini-black holes that have popped up around Metropolis. When it tried to get Lois Lane, though, it failed. The injured Lois has managed to drag herself to the Steelworks, to warn Lana Lang, Superwoman, of the threat. There, she shocks Lana’s proteges, Natasha Irons and Traci 13.

In some pocket of limbo, Steel makes a discovery. 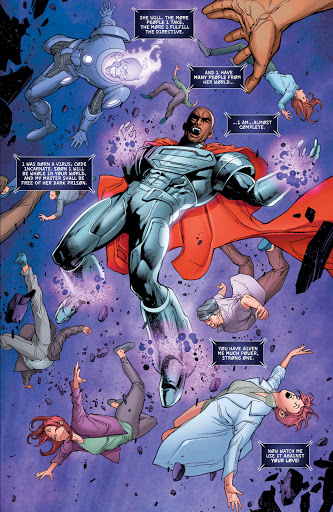 Meanwhile, a recovered Traci used her urban magic to learn just who the brains behind Midnight is. When Lana confronts them, she’s cut to the emotional quick by what she’s told.

I’m keeping the précis short because this isn’t the most dense of issues and if I reveal the villain and what they tell Lana, that’s pretty much the meat force-fed you. But both are satisfying, and make sense in terms of the rollercoaster ride that is the Superwoman series. More story would have been nice - the page count is 20 and fully six pages are spreads or splashes. But then, the pacing of this book has been weird of late, with the Smallville and Maxima stories weirdly, frustratingly truncated.

In terms of what there is, writer K Perkins provides an enjoyable script, and I like that she has a bow ready with which to wrap up the run. Artists Stephen Segovia and Art Thibert produce lovely, lively artwork, there’s a pleasing crispness, and it’s all coloured with energy by Hi-Fi. 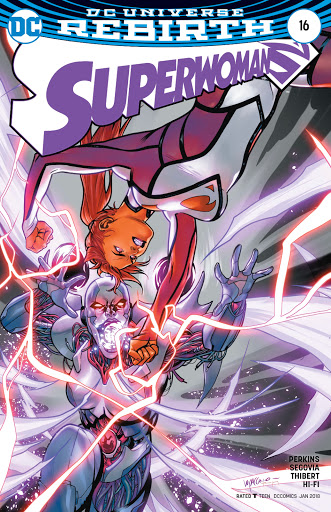 Ken Lashley’s main cover is pretty good, the blocky inking reminds me of the finishes on Seventies Kirby, but it could fit pretty much any issue of this series; I prefer Emanuela Lupaccino’s more targeted image on the variant.

Overall, this is a decent issue, with the up and down Lana having one of her better months, but I won’t be sorry to see this series end. Perkins, Segovia and co could be better deployed on a series without such a sullied core concept. Legion of Super-Heroes, anyone?