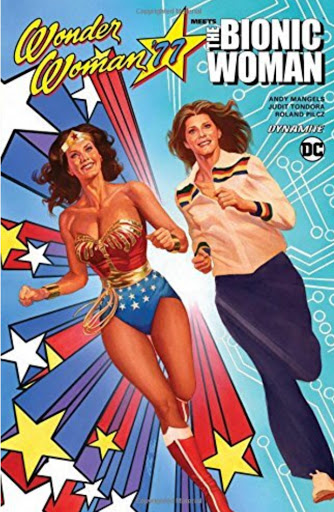 In the 1970s two fantastic females ruled American TV - Jaime Sommers, the Bionic Woman, and Diana Prince, Wonder Woman. They never crossed over at the time but four decades later the crimefighters finally meet in the pages of a comic series, now collected in a single edition.

As a longtime team-up fan I expected the usual formula: meeting, misunderstanding, melee and mutual mission. Refreshingly, writer Andy Mangels doesn’t give us that. He knows Diana and Jaime wouldn’t go down that route, they’re too clever and intuitive. So when they meet in the wake of a building explosion, the only sparks that fly are those of potential friendship. 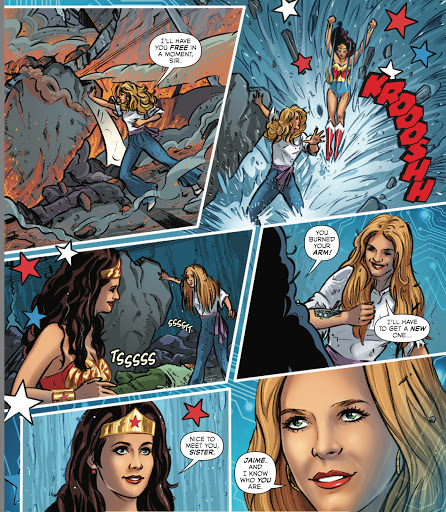 Soon, cyborg and Amazon are up to their necks in old enemies and faithful friends in a tale of revenge, ambition and love that perfectly melds two much-loved shows. It’s so long since I’ve seen either series that the likes of Fausta and fembots are dim memories... but fond ones. They feel like the myths and legends I read as a child. Mangels and artist Judit Tondora bring these fables back to brilliant life in six terrifically entertaining chapters that find and exploit logical links between the worlds of Jaime and Diana.

While the globetrotting spy caper motivates fight scenes aplenty, it’s the characterisation that makes this book such a delight. Every moment of our heroines getting to know one another rings true, whether they’re swapping origin stories, meeting loved ones or marvelling at MOs. 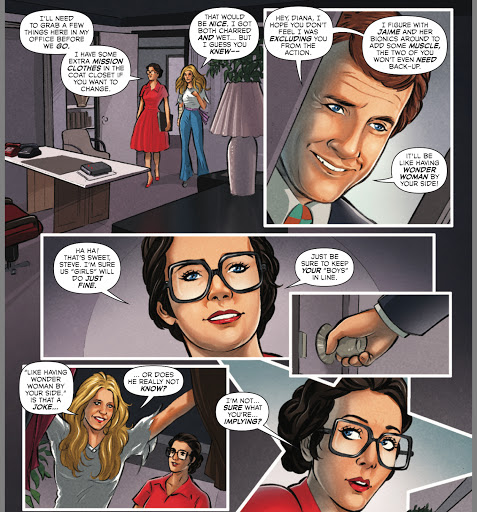 It’s not difficult to imagine Lindsay Wagner and Lynda Carter saying these lines, and having great fun with them.

If you’re too young to have seen either show, or simply missed them at the time, Mangels fills in the blanks with regular info-gobbets, occasionally poking fun at the fact he’s bringing everyone up to speed. 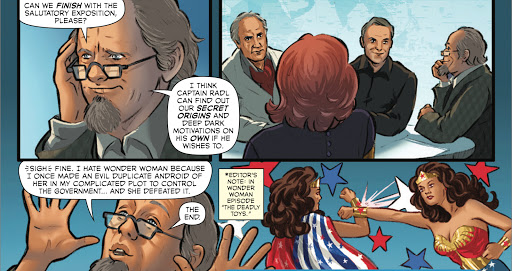 I won’t spoil the surprises, but it’s safe to say fan favourite characters from both dramas play important roles in resolving the joint OSI/IADC mission. Jaime and Diana, though, are the undoubted stars, their charisma surviving the transfer from TV to the page. 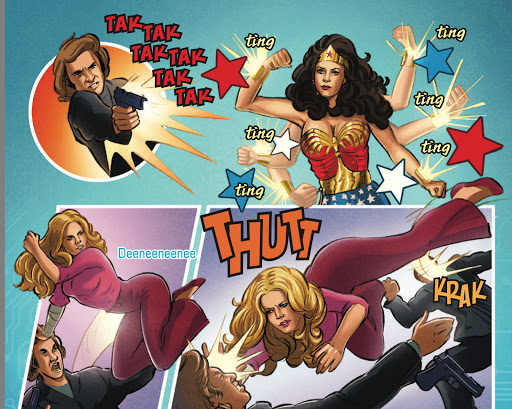 Tondora interprets the script with elan, proving a splendid storyteller, though, as is the case with most comic adaptations, there’s inconsistency, occasional iffy likenesses. Overall, though, Tondora and colourist Roland Pilcz produce a fast-moving, nice-looking book. Cat Staggs’ covers for the original six chapters are included and they’re a joy, as are the many variants by the like of Phil Jimenez and J Bone.

Using Christie Marston, granddaughter of Wonder Woman creator William Marston, as the model for Paradise Island’s historian is a lovely touch. A cameo by Mangels at the end may seem a tad self-indulgent, but you can’t blame one of the biggest Wonder Woman fans on the planet for wanting to enter her world, however briefly. And is that Tondora as the Amazons’ artist in residence?

Wonder Woman ‘77 Meets the Bionic Woman is a hugely enjoyable romp starring two of the most deservedly iconic heroines ever to appear on the small screen. Mangels, Tondora and friends do them justice in a big adventure that will likely having you grinning from ear to ear.

Now, when do we get a sequel?