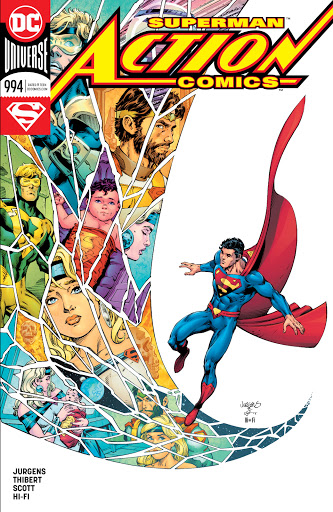 Booster Gold has followed Superman into Krypton’s past, but it’s not the one Clark expected - there’s a spaceport when interstellar flight was banned, his father Jor-El is palling around with General Zod.... There’s no time to ponder the mysteries as the authorities sic police in battle suits on the perceived saboteurs. 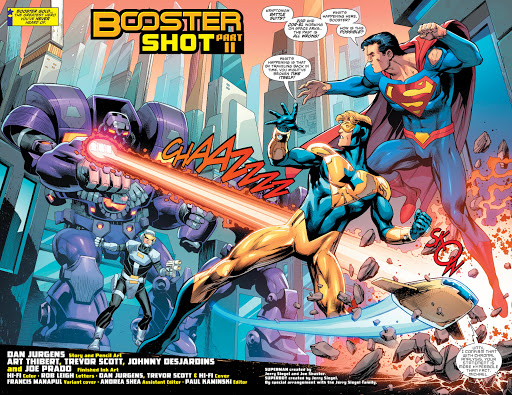 Our heroes manage to escape, and continue their disagreement. Superman wants to hang around long enough to discover whether or not his birth father was rescued at the moment of Krypton’s destruction, to become the terrible Mr Oz. Booster sees the bigger picture. 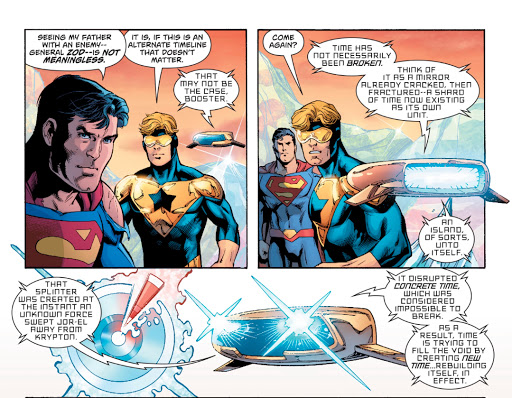 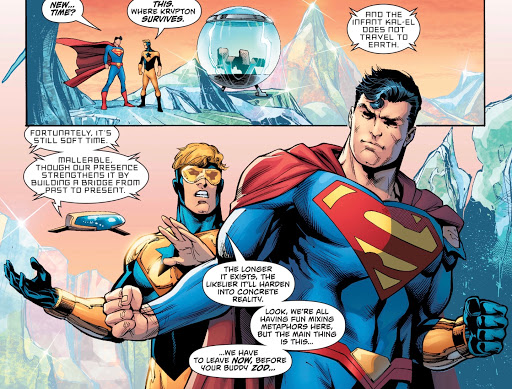 Meanwhile on Earth, Lois is processing the news that estranged father Sam Lane has been captured while on a black ops mission. Jon is confused. 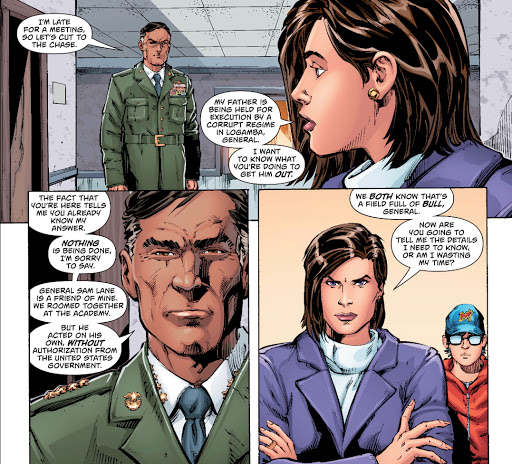 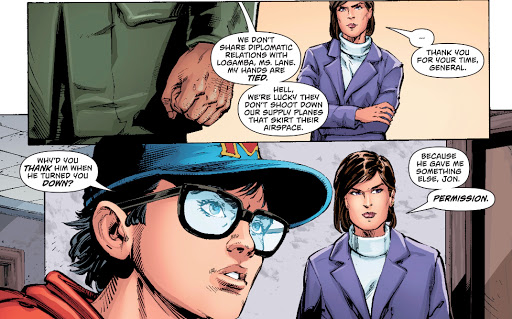 Back on Krypton, Zod has tracked our heroes down to the Jewel Mountains, and stepped up his attack. With deadly Eradicators facing them, Booster manages to force Superman into his time bubble, setting the coordinates for 2017, just after they left the Justice League satellite. As they speed forward through the timestream, they get a glimpse of what might have been. 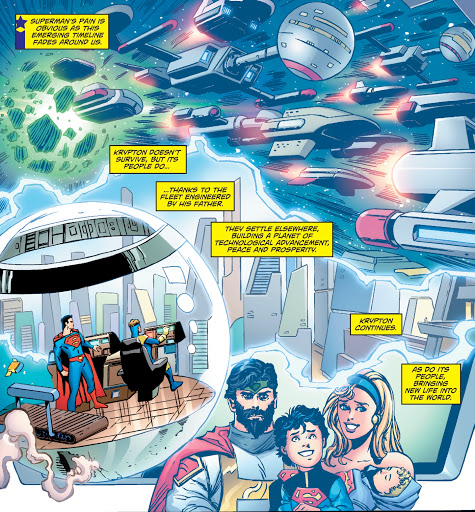 And then, Superman and Booster find themselves in another crazy situation.

I like this issue a lot. The riddle set last issue is quickly solved - Superman saw the future of this Krypton’s people a few years from when he finally lands, and we get another look as he leaves this time. Once again Booster narrates, his heroic character more evident than last time. It’s fun to see this story from the point of view of someone other than Superman - if Booster, a hero formerly known for jumping without thinking, reckons Superman is acting with little view to consequences, you better believe it. I like that Booster uses his old American football skills to force a very reluctant Superman into the time bubble, and it’s good to see Superman show an adeptness at using Booster’s weapons at one point - he doesn’t have his powers under a red sun but he’s not useless.

The couple of pages featuring Lois and Jon don’t much advance the Sam Lane subplot, but they show that Lois has real steel. The determination writer/artist Dan Jurgens gives her is quietly thrilling.

Jurgens’ pencils are strong throughout, doing his sharp script justice. His depictions of the battlesuit and Eradicators are suitably intimidating, and the character acting nicely nuanced. And page one, four panels of movement separated in time across an unmoving background, is especially terrific. The inking job is shared by Joe Prado, Johnny Desjardins, Trevor Scott and Art Thibert and you can see some of the joins, but the story doesn’t suffer. Trusty colourist Hi-Fi and letterer Rob Leigh contribute their usual strong work. 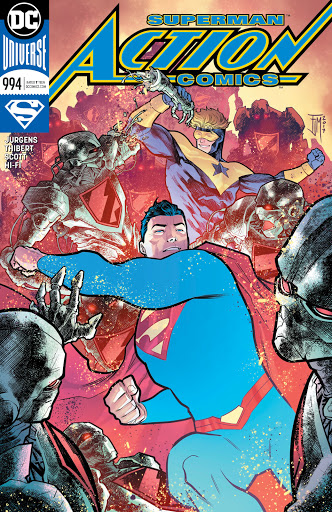 And both covers are smashers: Jurgens, Scott and Hi-Fi provide an eye-grabbing tidal wave of intriguing future Krypton images, while Francis Manapul’s battle with the Eradicators on the variant is a powerful piece, I love the Alex Toth-like simplicity of Superman’s uniform.

The Booster Shot arc is moving pleasingly fast, with the set-up for next issue very intriguing. We’ve not had a great extended Superman time travel story since Time & Time Again, a couple of decades ago... we may just be getting another right now.