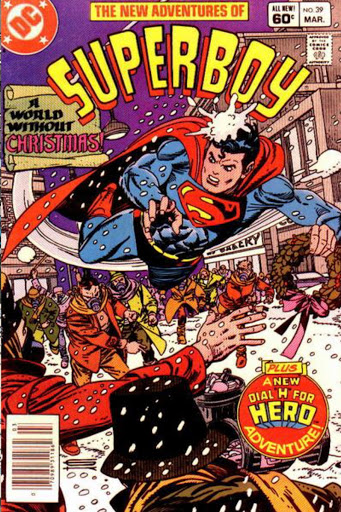 At the Kent home in Smallville, friends have gathered to celebrate Christmas. 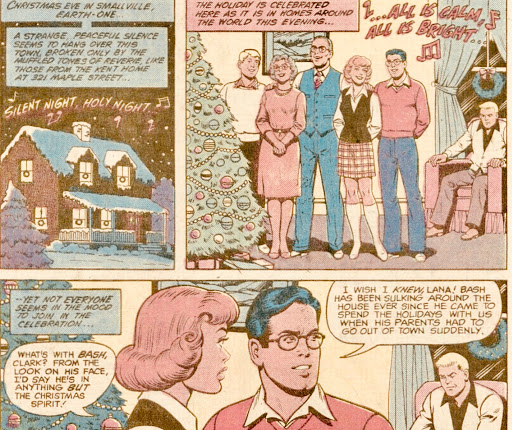 Clark thinks he knows why school bully turned prankster Bradley ‘Bash’ Bashford is so down that even Lana’s charms can’t turn that frown upside down. 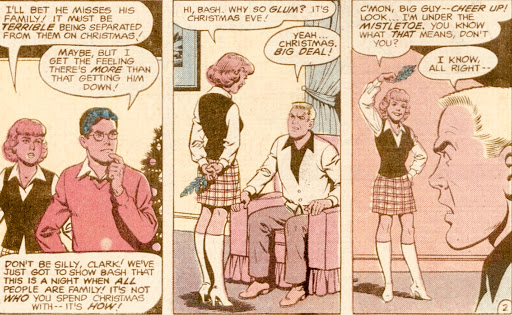 Shockingly, the reason shows Bash to have developed depth. 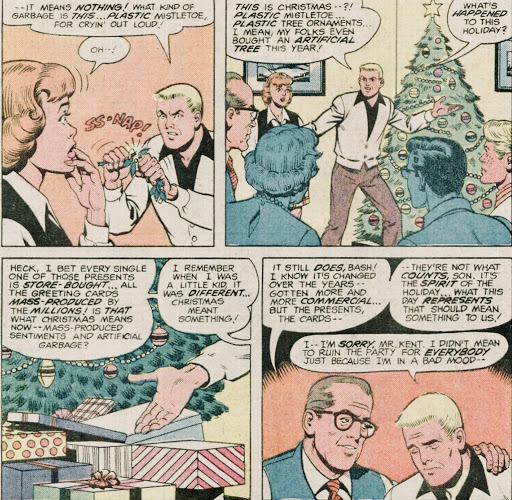 Disconsolate, Bash leaves to be alone with his thoughts. Who knew Bash had thoughts? Of course, this being a Superman Family entertainment, a person can’t be left alone to come to terms with their feelings, nope, they have to be taught a lesson. Superboy doesn’t put it like that, though.

Bash reminds Superboy that this is the Sixties and the world seems more of a mess than ever. 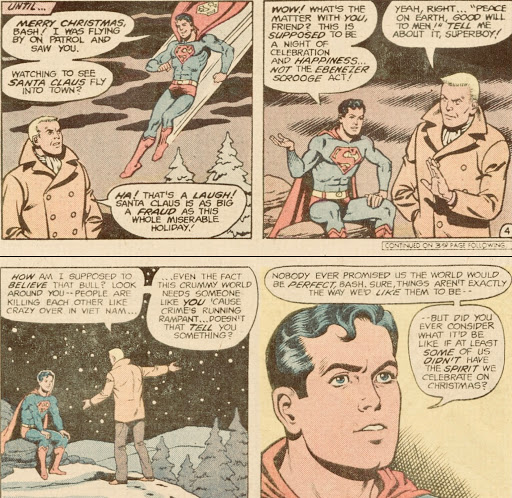 Our hero decides to show Bash that even though everything may be rotten in the state of Kansas and beyond, there are bound to be worse places. 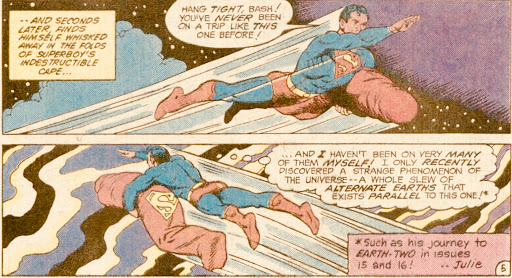 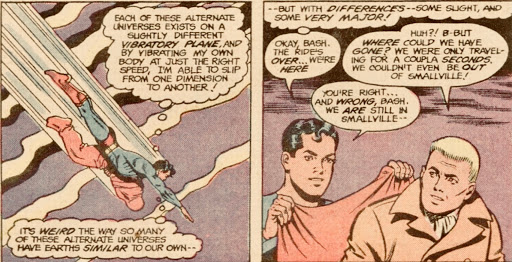 Time to cross the dimensions for a trip to a world where Smallville is more like Potterville. 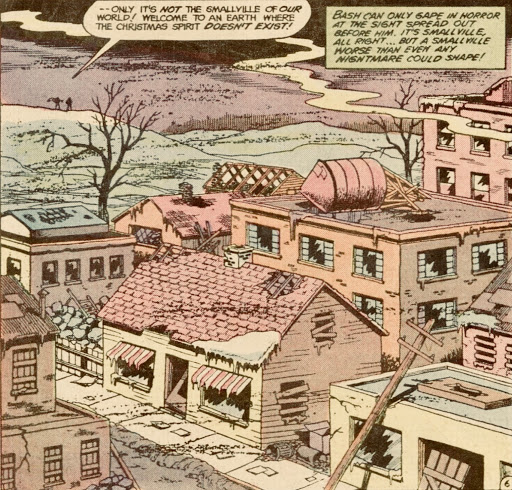 At first, the place seems deserted, then Bash sees a skulking figure. 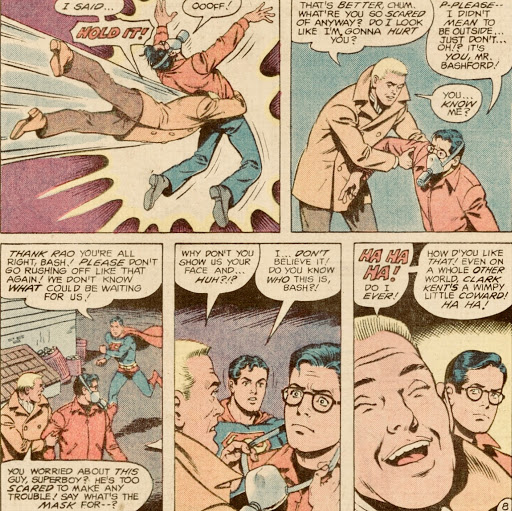 If this Clark has powers he’s doing a great job of hiding them. Meanwhile, the natives are revolting. 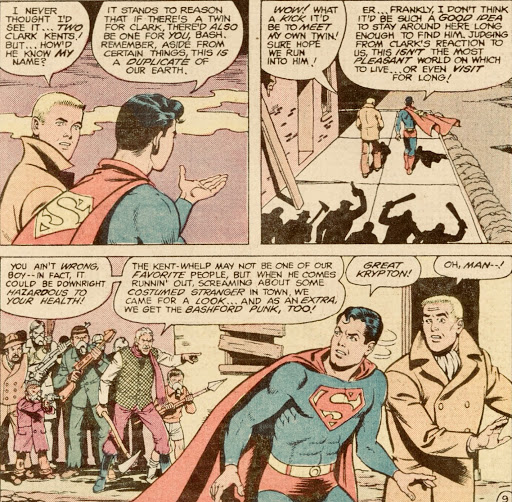 Superboy shows them who’s boss, shooing the itching-for-a-fight Bash away for his own safety. 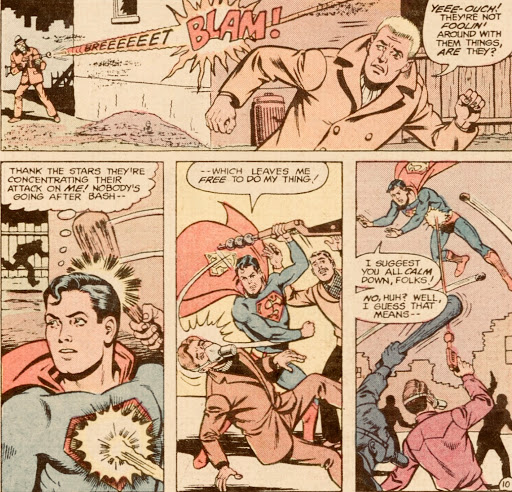 Bash runs into someone else - or vice versa. 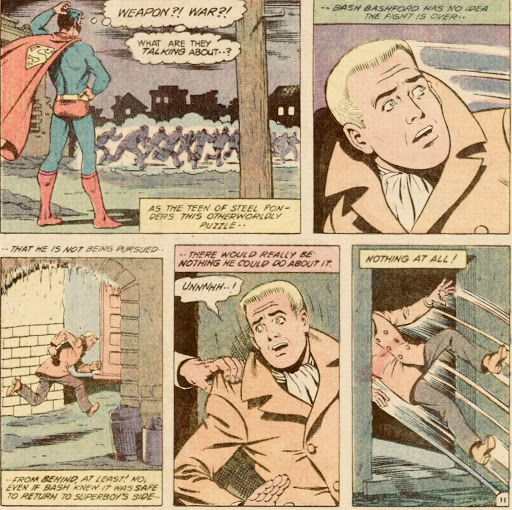 Having taken all pitchforks away from the villagers, Superboy decides its time to find Bash and get outta Dodge. But he sees someone in need of help. 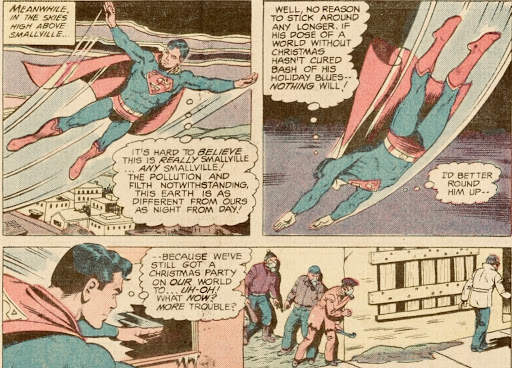 It turns out this was the stranger who was apparently abducting Bash; in fact, he was protecting him from further menacing by the mob. And the saviour has a very familiar face. 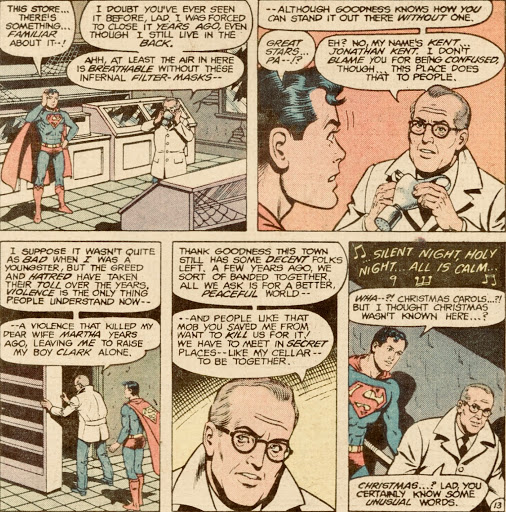 Jonathan is part of the Smallville underground, dedicated to fighting for a more peaceful world. If that’s not the spirit of Christmas, what is?

We meet the leader of the underground, and it turns out he’s a pacifist. Surely that’s not... 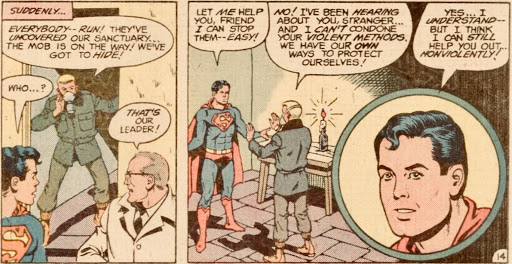 So Superboy helps the gang hide, rather than confront the mob. 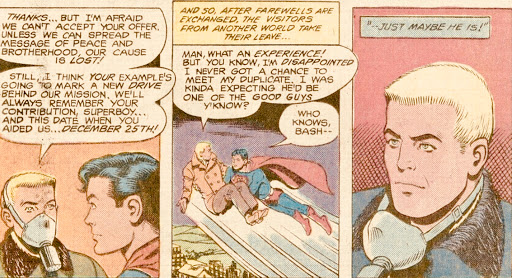 So it’s back to Earth One from this unnumbered wasteland, and an epilogue.

OK, there are holes. Why doesn’t the pollution bother Bash just a tad more than a tiny cough? How does Superboy happen to find a world without Christmas so quickly, and given messianic omnipresence, where the heck was Jesus 2000 years ago? Is Bash’s eyesight so bad he can’t recognise ‘himself’ wearing a gas mask? And does this world’s Clark lack powers or was his spirit so broken by Martha’s death that he simply hasn’t the heart to fight back.

To be honest, I don’t care. Everything I need to enjoy the story is there, and if I need more, I have an imagination. Writer Paul Kupperberg gives me a different type of Christmas story, one that makes Bash Bradford a better character - the way he acts here doesn’t contradict previous appearances, it complements them. While Bash is a surprising choirboy, he’s no instant angel - notice him laughing at cowardly Clarks all over the multiverse. We’re learning more about Bash and what we get makes me sad that along with Clark’s New Adventures gal pal Lisa Davis, he never appeared in comics again after this series ended (although I hear whisperings Bash will show up in Young Justice season 3).

See how Kupperberg made me care? Veteran Kurt Schaffenberger, on pencils and inks, further sells the story, with the sight of familiar faces in a dire, ongoing situation tearing at the heartstrings. I also like the oddball weapons never referred to in the dialogue. Nice touch.

And Biff looks suave as all get out in his Mac. Schaffenberger was a fantastic cartoonist.

Throw in a gorgeous Gil Kane cover, a fun - though un-festive - Dial H For Hero tale and New Adventures of Superboy is a typically fine issue of a series that is unjustly forgotten.