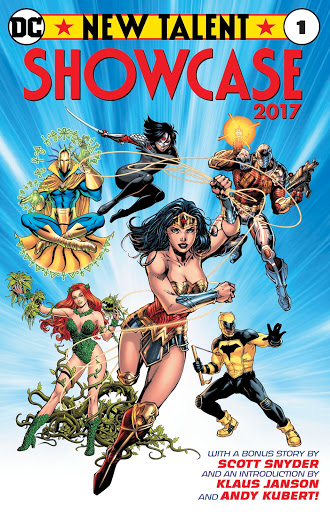 I reviewed the first of DC’s New Talent Showcase giants last year and my big complaint was that the stories weren’t self-contained. Most were set-ups for arcs we’d likely never see. And we never did see continuations. So how is the 2017 peek at the abilities of the young writers and artists from DC’s Talent Development Programme?

Better. Only a couple of the stories suggest or demand continuation. As for the quality, well, let’s see...

The issue opens with a team-up between Batman sidekicks Red Hood and Duke Thomas. 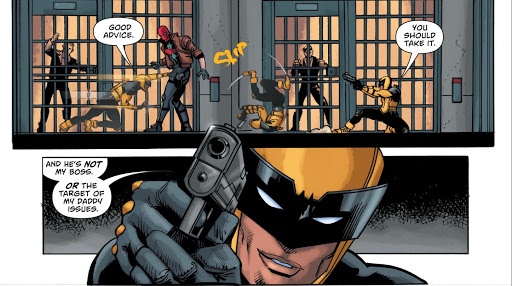 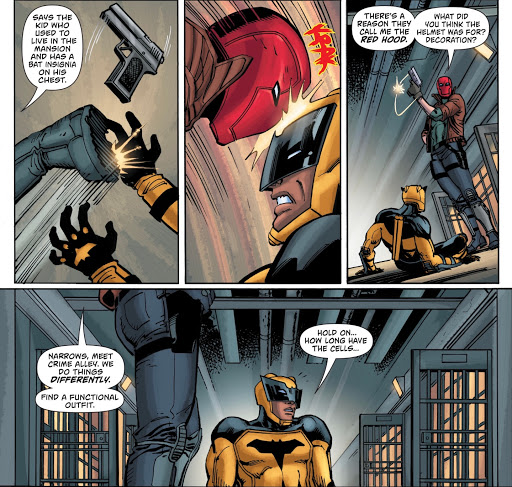 It looks like they’re tackling an Arkham Asylum breakout, but they’re in the Mud Room from Detective Comics, the Batman Family’s answer to the X-Men’s Danger Room. It’s a simple tale, but I enjoyed seeing Red Hood play mentor. Minkyu Jung’s pencils are very decent, the storytelling pretty good. Klaus Janson, one of the tutors on the talent programme, inks with a light touch - there’s not much in the way of embellishment, I suppose he wanted to foreground Jung’s work. Tony Patrick’s script is sparky, and bodes well for his upcoming gig as co-writer with Scott Snyder of Duke’s Batman and The Signal series. The big challenge? Make the kid interesting... he’s been around a few years now and I still had to look up his surname. 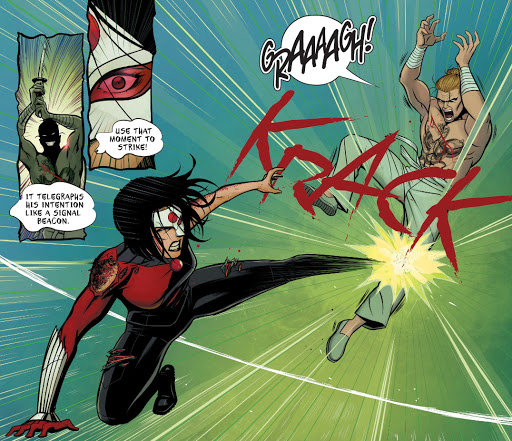 Story two features Katana, a character I’ve only occasionally found bearable, never mind appealing, since her debut in the Eighties. She likes to stab people and talks to her sword. She was at her best as an unlikely big sister to Halo in the Outsiders series, but away from Halo, she’s just not that interesting. So big kudos to Aaron Gillespie for a very readable tale examining her relationship to the sword Katana believes contains souls of the dead, including her husband. Amanda Waller is the utter stinker she’s been since 2011, I hope DC bring back the more nuanced Ostrander/Yale version one day soon. Lynne Yoshii’s illustrations are a treat, very dynamic, and experienced colourist Beth Sotolo does the newcomer proud. 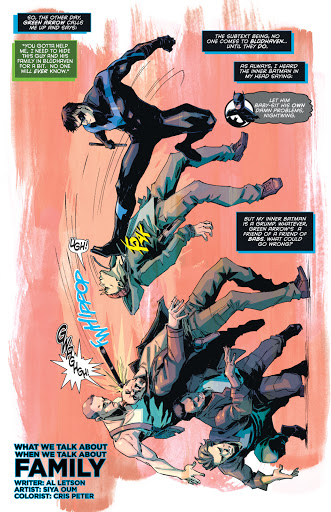 Next up, another story featuring a Batman character. Nightwing takes on Green Arrow baddie Count Vertigo with the gimmick being that whereas some people have an angel and a devil on their soldier, he has the entire Batman Family offering advice. On the one hand, Nightwing’s one of the most experienced heroes in the DCU, why would he be thinking about what his colleagues would do? On the other, who cares, it’s the type of story comics can do that most mediums can’t, and it’s terrific fun. I look forward to seeing what writer Al Letsom does next. Ditto artist Siya Oum, whose work is pretty good throughout, though never better than on a splash that works equally well in two directions. Another splash, showcasing the villain, is too scratchy, lacking the impact it should have. Cris Peters’ colours support the work, I especially like the use of washes, while Dezi Sienty deserves a big hand for the varied lettering. 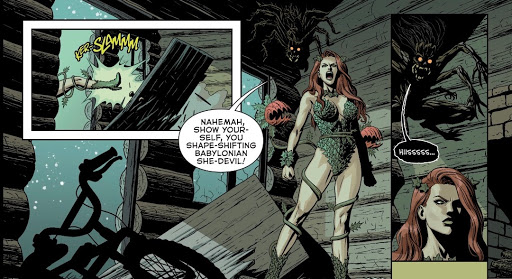 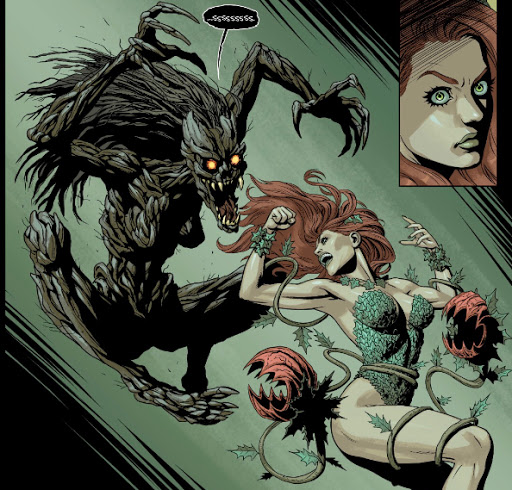 Next up, yet another story featuring a Batman character. It’s Poison Ivy vs ‘a shapeshifting Babylonian she-devil’ and the immediate attention grabber here is the art by Matt Merhoff, coloured by Dave McCaig. Poison Ivy appears on the first page in a gorgeous cape of leaves which shows she doesn’t need to be near naked to bewitch. She soon casts off the cape, but even then Merhoff avoids the excesses of some artists, putting her in pretty much Carmine Infantino’s original outfit. Merhoff also shows a flair for action sequences... I suspect he’ll have a bash at a regular series pretty soon. As for the story, Owl Goingback writes a fine Ivy, remembering that while she’ll fight for the world, she’s not especially fond of humans. Silent Screams is the best story in the book. 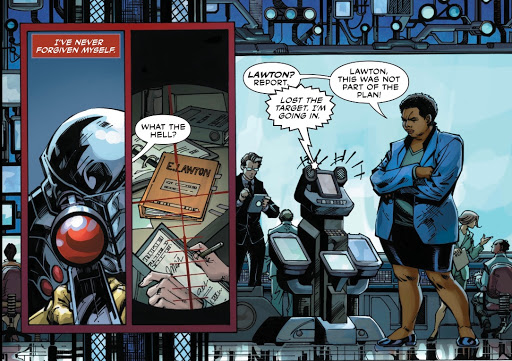 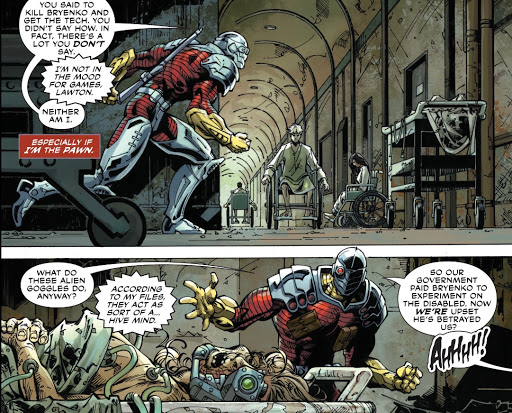 And then it’s another story featuring a Suicide Squad character. A mission in which Deadshot is the key player hits rather too close to home. Writers Erica Harell and Desirée Proctor’s story turns on an amazing coincidence and likely won’t enter Floyd Lawton’s canon, but I doubt they intend it to; it’s a neat, entertaining read that’s grown from their experiences on the DC programme. Lali Sharma’s pencils are effective, though there’s the odd rough spot, such as Deadshot’s extended right arm in the bottom panel above, which is awkward, and those fingers are a tad stumpy. I’m surprised inker Jagdish Kumar didn’t fix that one, but really, it’s something the penciller should get right in the first place. Overall, though, a pretty decent short. 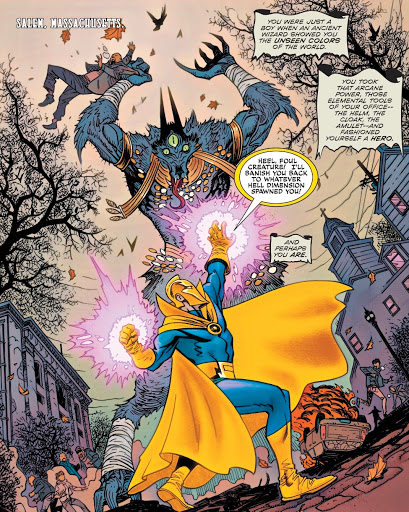 Hurrah for writer David Accampo, who gives us a story featuring a non-Batman, non-Suicide Squad character; it’s original Dr Fate Kent Nelson vs Anubis. The Golden Age hero has fought and beaten many a deity in his time, but there’s a hitch... The story ends with the big picture unresolved, but the villain’s been defeated, Kent’s origin has been recapped and there’s plenty of potential for Accampo to pick up a rather dramatic thread (hint: Nabu is, once more, a right old git). Sam Lotfi’s art is uneven, with the first and last page being the standouts, but the potential is there to see. Lotfi’s art is propped up at times by the excellent colouring of David Rauch, but I’m interested to see how Lotfi’s art develops. 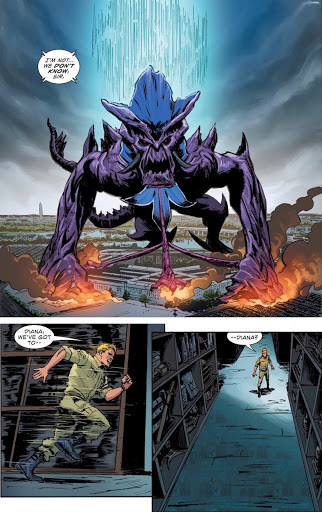 The book closes with a Wonder Woman story written by DC big name Scott Snyder. It’s basically Wonder Woman vs Warehouse 13 but elevated by Snyder’s strong characterisation of Diana and Steve Trevor. Sadly, it’s a bit of a downer as anthology stories go - the set-up is intriguing, the execution terrific, then... ‘The End’. Except it’s not. The Nightwing story also stops with a call to arms, but it’s obvious Count Vertigo’s going to be taken out five seconds later. Here, there’s a lot unexplained, unresolved. Come on Scott, you know I’m a fan, finish this up somewhere. And bring artist Ibrahim Moustafa along - his Diana and Steve are expressive, and move well on the page, and he gives great giant monster. Colourist Romulo Fajardo Jr also brings his talent to the table, with the lighting work especially effective.

Overall, this is a lot more satisfying than last year’s effort, which had mostly decent to good art, and promising stories which mostly failed to conclude. That’s beyond annoying when you’re shelling out $7.99. This year’s edition is better, giving us mostly done-in-ones, with story and art that wouldn’t shame professional writers and illustrators. Some of the contributions are very promising, one or two are excellent. It’s a shame, though, that barely anyone here seems interested in the DCU beyond Batman and Suicide Squad. Kids today!

I am confused, though, as to what artists Minkyu Jung, Siya Oum and Sam Lotfi are doing in here, as all featured in the 2016 comic (Jung’s art actually looked nicer in last year’s Catwoman/Wonder Woman chapter, with no additional inker). Were they held back a year for bad behaviour?