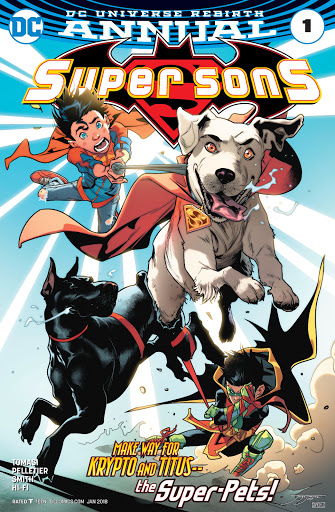 First it was Goldie. 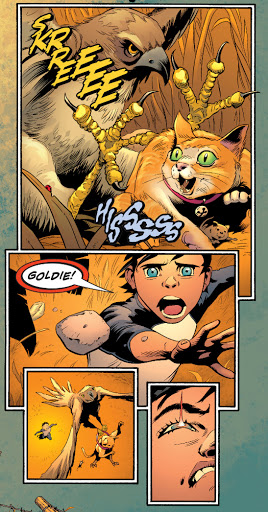 Then some nameless Apokoliptian pooches. 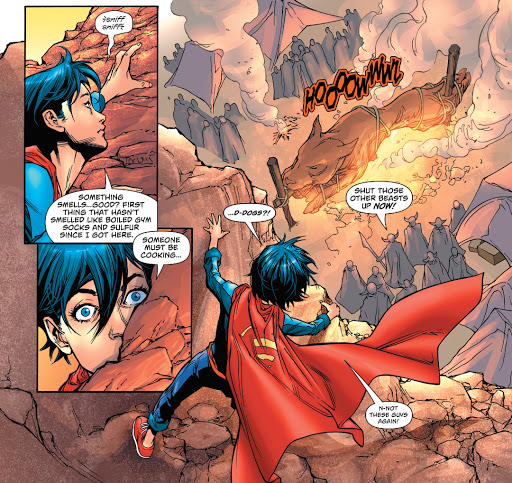 The extra-sized issue opens with a lost dog getting a sinister ‘helping hand’. 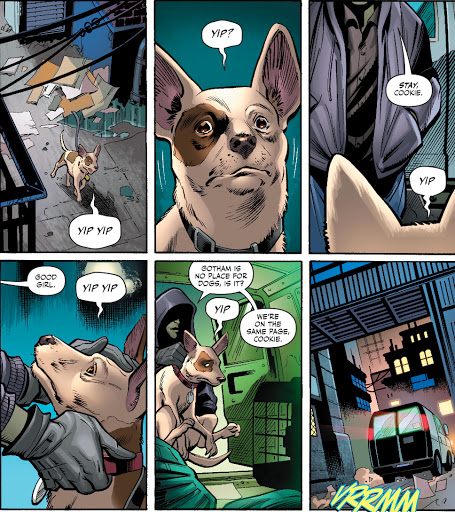 Then it’s over to the Jr World’s Finest team, Damian Wayne and Jon Kent, practising their ongoing team-up. As ever, they’re united in wanting to stop the bad guys, but they don’t half bicker. 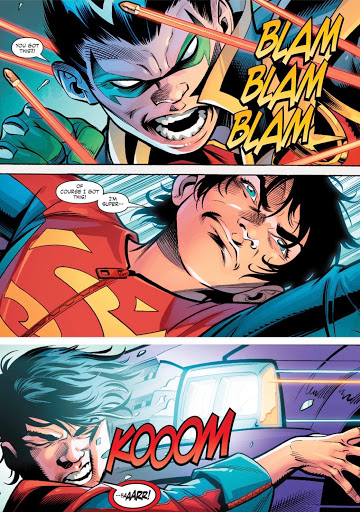 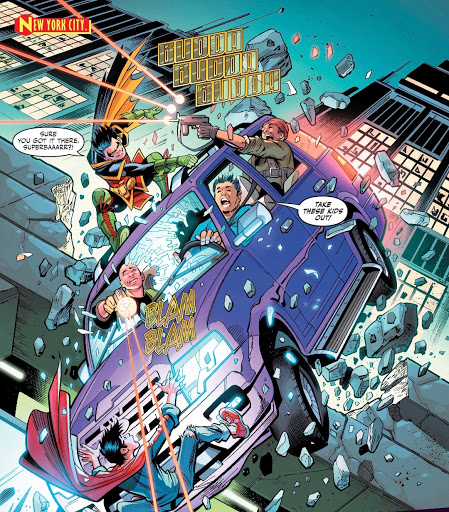 Later, Jon resolves to solve the mystery of Gotham’s disappearing dogs that kicked off this story, ‘Animal Planet’. Someone, though, isn’t willing to wait until morning, so it’s off to Wayne Manor to collect Damian’s pet pooch, Titus. 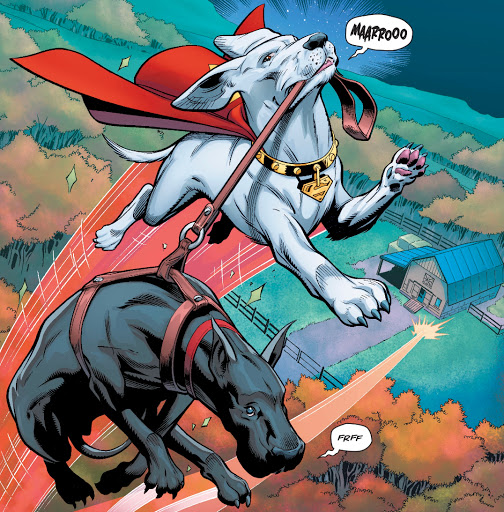 Then, a consultation with one of DC’s distinctive detectives, who guesses what’s on the Superdog’s mind. 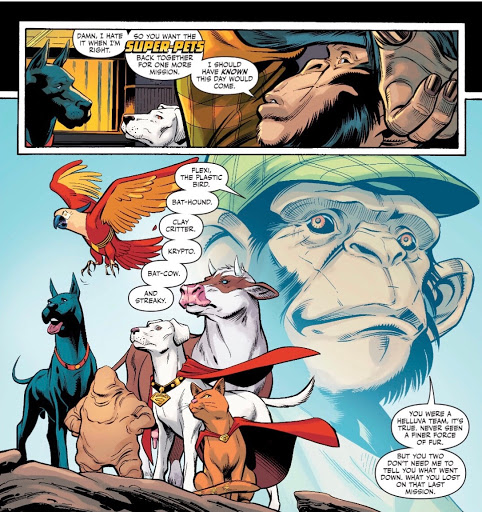 But why would Streaky the Supercat be angry with Krypto? Thats where the flashback comes in - Streaky blames Krypto for the death of a teammate. Still, she ultimately goes along with the ‘one more mission’ deal, the dogs are found and there’s a nice twist.

Slaughtered pet aside, this is a typically breezy peek at the world of the Super Sons. Sure, Jon and Damian aren’t around for most of the book, but it’s their pets who are leading the adventure, and they do bookend the story. I’m not sure who this Streaky is - current continuity Supergirl has no Supercat, and traditionally, Streaky is a male, - but in the reality-shifting world of DC Rebirth, anything is possible. I do wonder, though, why Ace has to remain at Wayne Manor, sleeping, rather than getting to go on the mission... shouldn’t he be Bat Hound by now?

A couple of things I especially liked - clarification of Krypto’s status in the Kent clan...

... and the second instance of a potentially running joke. 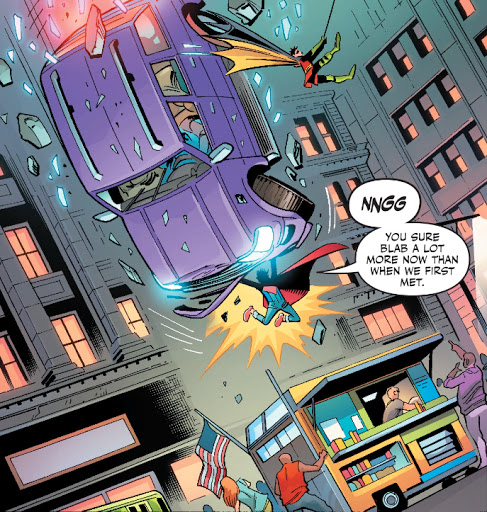 I’d love a variant cover for this issue homaging Detective Comics #38, with Flexi the Plastic Bird tearing through a paper hoop, because he really is the Character Find of 2017. Well, November 2017, at least. His heroics are key to the success of the mission, and he looks amazing. Again, I’ve never heard of Plastic Man having a pet bird, but maybe he’s visiting from Earth Animation, and lives with Plas and Penny and Offspring. Ach, who cares, he’s here and he’s terrific. 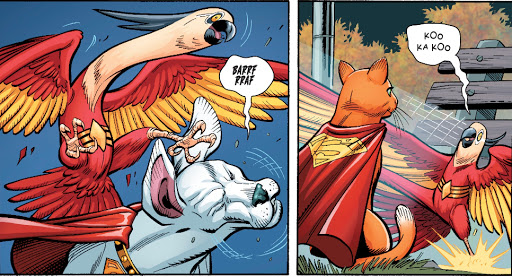 A big part of the success of this issue is the art by penciller Paul Pelletier and inker Cam Smith.

They not only give us a take on the Super Sons that fits nicely with the vision of regular artist Jorge Jimenez (note Jon’s trademark tongue-out-while-straining moment) without slavishly copying it, they produce utterly delightful animal art. Skittish, loving, fierce... these mercurial beasties ring true. The Super Pets aren’t anthropomorphic, but they are expressive as all out, which is vital given Tomasi foregoes the tradition of having them speak to one another via English language thought balloons.

The underrated Pelletier gives us dynamic storytelling, while Cam Smith goes for clean keylines and subtle shading. The combination works beautifully, with the finishing touch of colour expertly applied by Hi-Fi. And I love that letterers Travis Lanham and Carlos M Mangual use an attractive Art Deco-style font for the change of scene notices.

Jorge Jimenez and colourist Alejandro Sanchez’s cover is a hoot, wonderfully composed and executed, making this book hard to pass over.

Oh, and one more thing - a new toy for Damian.