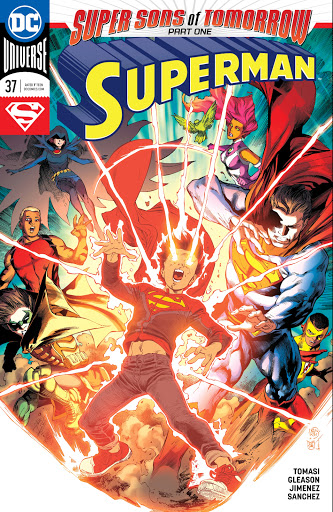 It’s a dark night and Bruce Wayne is in the study at Wayne Manor, brooding. It looks like history is repeating itself. 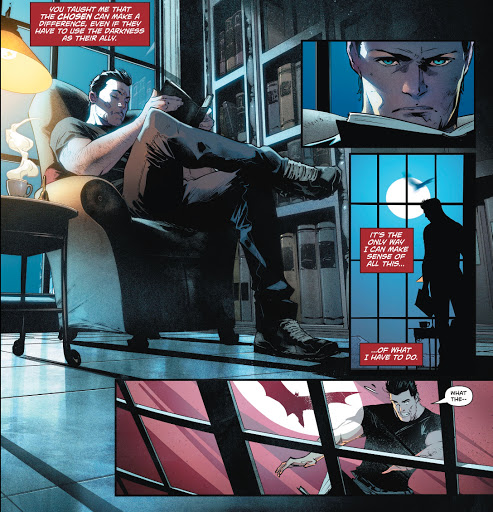 In fact, it’s a matter of future history - or so Tim Drake, the Batman from a Hypertime world, believes. There follows a brutal battle between the heavily armoured Tim and a Bruce who was having a rare night off. 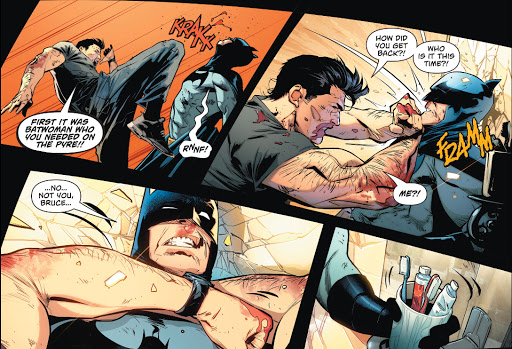 The result isn’t inevitable, but it’s not surprising. Call it Round One.

Later, in the Fortress of Solitude, Superman is righting a wrong. 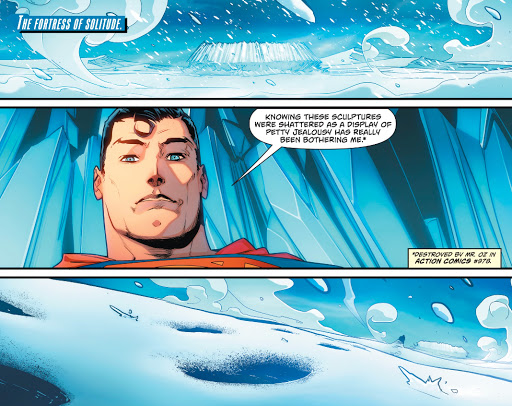 It turns out Tim only called at the Batcave to collect one of Bruce’s patented ‘Take down a Justice Leaguer’ boxes. He needs to get Superman out of the way - it’s not a member of the Batman Family he’s after, this time!

Fortress drone Kelex is the first to encounter Tim, but Superman isn’t far behind. 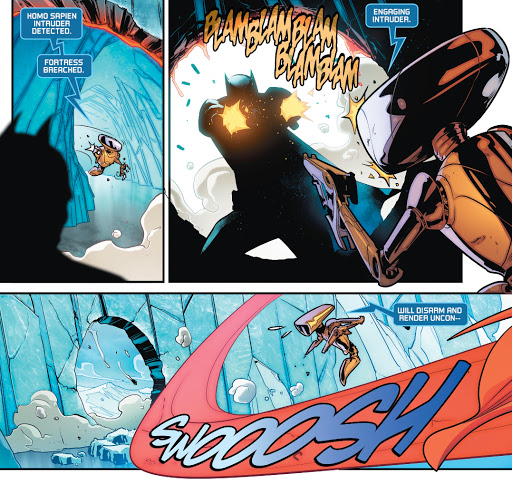 I wonder if anyone will complain that the first half of this issue is entirely Batman and Tim? While this is an issue of Superman, it’s also part one of a crossover with Teen Titans and Super Sons, both of which feature Batman’s son, Damian Wayne. When it’s collected, any ‘But this is a Superman book’ complaints will be moot, as it’ll likely be published under the Super Sons imprint. Really, I can’t imagine any superhero fan not enjoying a fight scene of rare intensity.

The encounter between Superman and Tim is similarly satisfying, if less one-sided. Here, Tim is at a disadvantage, only stopping Superman via patented Bat Ex Machina tricks. The visuals from regular Super Sons artist Jorge Jimenez are eye-poppingly good, endlessly dynamic and characterful. One splendid panel among a bucketload sees Jimenez use triple images of Tim to show him descending into the Batcave with a bloody Bruce.

And the dialogue from writers Peter J Tomasi and Patrick Gleason is terrific, especially as they have a pissed-off Bruce face up to Tim. Suddenly the Batman of the Future isn’t so cocky. 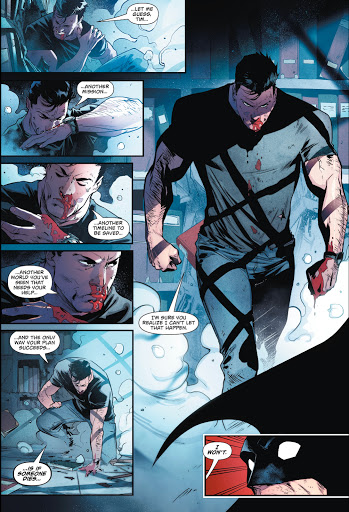 And that’s my only complaint about this first chapter. Like Bruce, and later, Superman, my perspective is, ‘what, again’? It’s barely a month ago, our time, that Tim was trying to kill Batwoman over in Detective Comics because she was going to make his future world an apocalyptic dystopia blah blah. He failed, it became apparent this wasn’t actually his timeline and he vanished in a puff of continuity. So what the heck has him convinced that, actually, it’s lovely little Jon Kent who’s going to ruin the future?

I like that while Tim surprises them both, Gleason and Tomasi have the World’s Finest heroes immediately guess his game... good on Batman for filing those reports, and Superman for reading them!

Another nice thing is that Kelex gets to do more than sweep up the Fortress - is a team-up with Booster Gold’s drone pal Skeets too much to hope for?

Colourist Alejandro Sanchez impresses with moody, dramatic work, while letterer Rob Leigh continues to be a big asset to the Superman books. 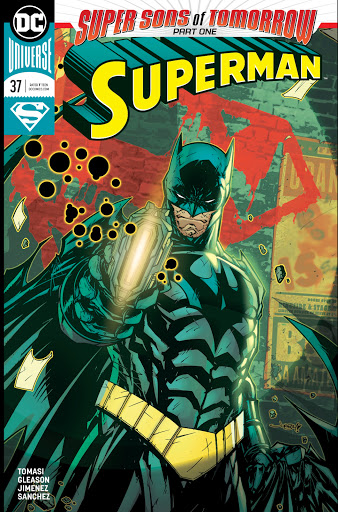 Penciller Ivan Reis and inker Julio Ferreira give us a pleasantly Alan Davis Superman on a corker of a cover, with Marcelo Maiolo’s colours the popping candy on the cake. There’s also a powerful image of Tim on Jonboy Meyer’s variant.

So, a great opening chapter - and no need to wait for part two, with Super Sons #11 published this very week and reviewed on this very blog!