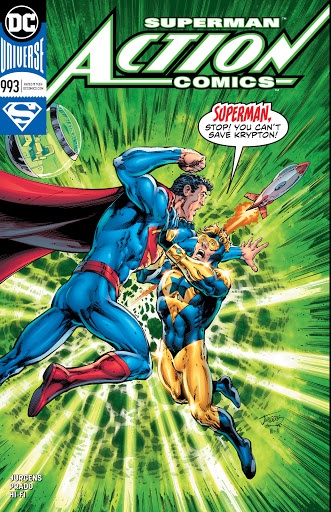 Superman has used the Cosmic Treadmill to head for Krypton in its last moments, wanting to know for definite if birth father Jor-El was saved from death by a strange force that plucked him away. If that’s so, then the monstrous Mr Oz is likely telling the truth when he claims he is Jor-El - something Superman doesn’t want to believe.

Time travelling hero Booster Gold turns up at the Justice League satellite a second or two too late to stop Superman. His drone pal Skeets says there’s no point going back into the timestream and trying again.

Before Booster can form a new plan, Barry Allen, inventor of the treadmill, turns up and unleashes some Flash fury. 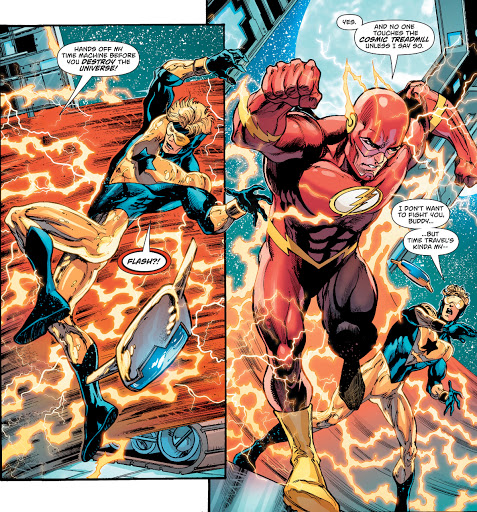 Meanwhile - relatively - Superman is watching Krypton as he emerges from the timestream. 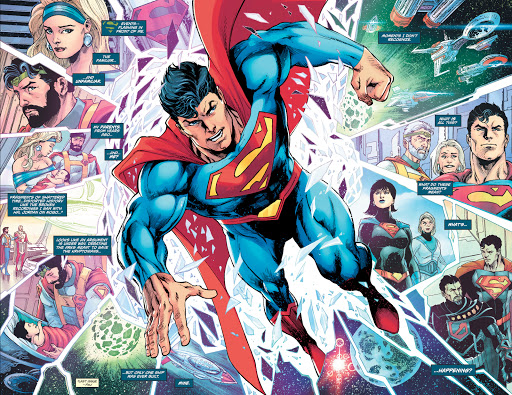 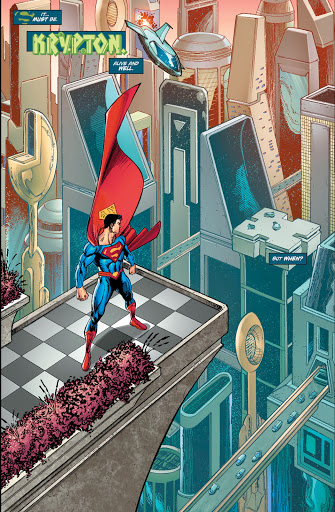 Back/forward in 2017, Super Son Jon Kent is still at the Daily Planet, and Steve Lombard is showing him his office. 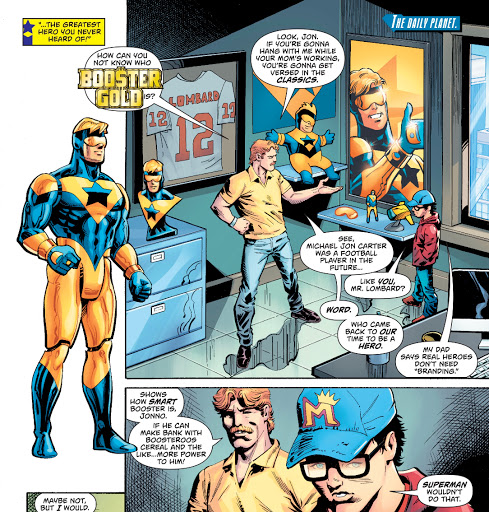 An unimpressed Jon makes his excuse and leaves, then hears his mother, Lois, receive awful news from editor Perry White. 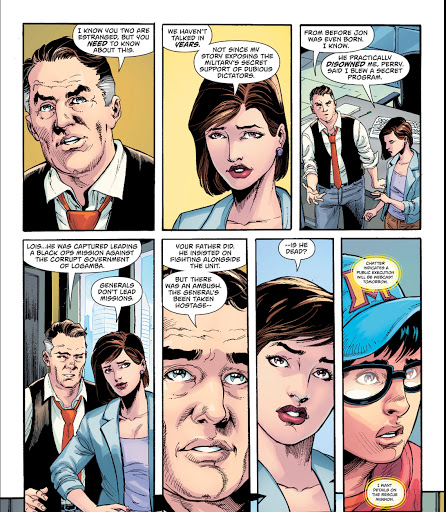 At the JLA satellite, Skeets uses his hi-tech knowhow to  take out Barry, freeing them to follow Superman...

... and there’s more, in an issue that truly tickles my nostalgia nerve. Booster Gold and Superman are the two characters with whom Dan Jurgens is most associated, and here he is, not only writing, but pencilling them again. The issue opens with Booster narrating, we’re getting his perspective on events, making it feel as much his story as Superman’s. Heck, DC could have pasted the old DC Comics Presents logo on the splash page and no one would have blinked.

It’s surprising that Superman should almost blithely travel back to Krypton with no thought to the fact he won’t have his powers.

Another big Blimey is how much of a hothead the Flash is; yes, time travel is dangerous, but he’s being rather hypocritical - which hero here messed up everyone’s timeline with a selfish, rash chronal cock-up? I’d rather Jurgens had Barry offer an assist... I know Booster has had his public image problems but Barry should have given him a fair hearing.

I enjoyed Booster checking with Skeets which social media platforms are currently popular - a guy zooming in and out of the timestream would have problems keeping it straight. But, him taking even a moment from this incredibly urgent mission to consider having something posted, well, I thought he’d grown beyond that.

The ‘time vortex’ messing up Skeets’ control of the time bubble is very reminiscent of Silver and Bronze Age Time Trapper tampering... I’d love it were a version of that baddie to be thrown into this story, and Dr Manhattan proved a red - or rather, blue - herring.

The Krypton montage is hugely intriguing - pieces from the origin that we know, with Krypton dying, and moments showing an aged Jor-El and Lara Lor-Van, Jor-El working with Zod, Lara with... Ursa? A grown-up daughter?

So Steve Lombard is to Booster what Bibbo is to Superman, his biggest, well, booster. I don’t recall Booster’s origin being public knowledge, but that could be my aged brain cells. 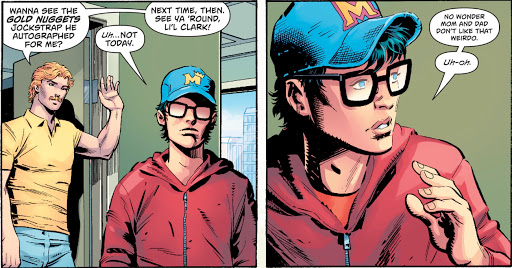 If not, I’m No Prizing it that when Booster met Steve he shared the info with a fellow American Football player (wouldn’t it be fantastic if Booster told Steve he was a legend in the future?). Credit to Jurgens for the work he’s been doing with Lombard of late, sure, the sportscaster is a bit of an ass, but he’s showed courage, and been nice to Jon. And the elliptical pause that shows career regret, it’s very human. I’m actually disappointed with our new Superboy for being quite so dismissive of the guy.

Sam Kent has been presented as a militaristic pillock for so many years that I can’t say I’m happy he’s coming into the book. I’d not see him executed, though, so good luck, Lois! Who knows, Jurgens may write him with more subtlety than we’ve seen for a long while. And Logamba again! It’s the new Qurac.

I read Jurgens saying he wasn’t originally going to draw this issue, but found he couldn’t resist. I could not be happier, no one draws Booster better than his creator, and it’s always a treat to see his Superman again. But it’s Lois who really benefits, she looks so lovely, graceful and intelligent. I don’t know if finishers Joe Prado and Cam Smith split the pages on a Krypton/Booster basis, but the whole issue looks good. As well as the Lois scene, memorable images include the Krypton flashback/forward, Superman’s meeting with Booster and the Flash fight.

As ever, colourist Hi-Fi keeps things popping, while letterer Rob Leigh deserves extra credit for the new Krypton logo on the city splash page, it reads as English but evokes the traditional Kryptonian letterforms. 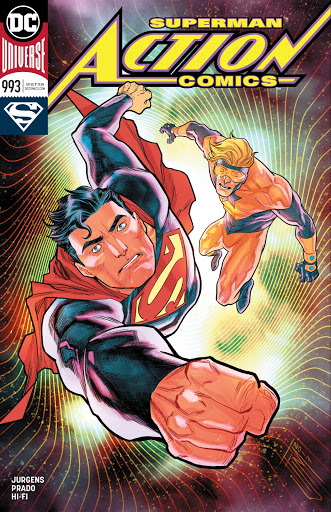 We’re once again offered two covers: the mass market version by Jurgens, inker Trevor Scott and Hi-Fi is a nice old fashioned teaser, complete with word balloon and the explosive green that came with John Byrne’s Superman, while Francis Manapul’s variant is a poster-style treat.

Everyone involved, from the above-named craftspeople to editors Paul Kaminski and Andrea Shea, should take a bow for an issue that is packed with mystery, action and character, and looks fantastic - it’s everything the first chapter of a new storyline should be.