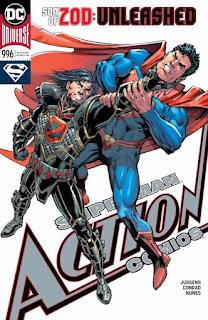 Today Lois Lane sneaks into the African country of Logamba in a bid to save her military man father from execution. 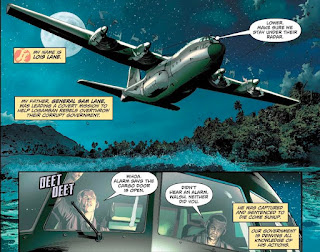 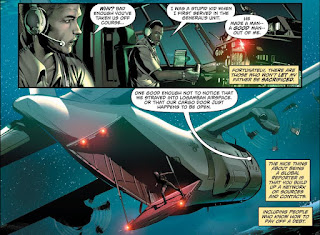 Decades from now, Superman and Booster Gold try to survive New Krypton long enough to get the necessary materials to repair their broken time bubble and return to 2017. 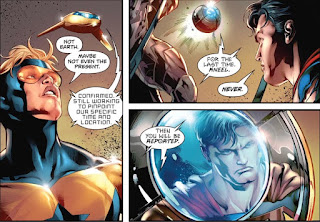 It won’t be easy for either Mr or Mrs Superman. But Lois has allies, from the US pilot loyal to her father to Logamban journalist Hambi to religious sister Borhonna. 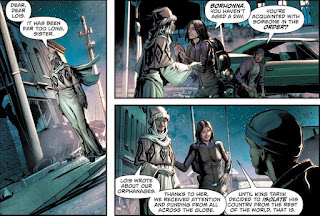 And while she has a guardian angel watching over her unseen... 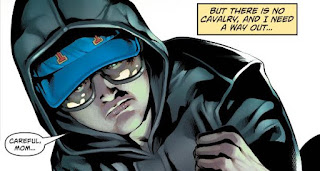 ... so far, Lois is managing on her own merits. 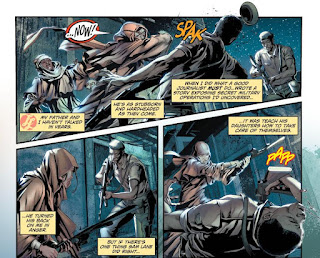 On New Krypton, Booster and Superman deduce that this is a world conquered by General Zod, partner Ursa and their son Lor-Zod. And while Booster’s robotic pal Skeets can help them get close to where they need to be, they aren’t expecting to meet not an Eradicator droid, but the real thing. Then again, the Eradicator wasn’t expecting a fighting mad Man of Steel.

It’s part four of the Booster Shot story, which began with Superman on a desperate, ill-considered mission to see Krypton’s end and learn whether birth father Jor-El survived its destruction. Time-travelling hero Booster Gold intercepted his doings, knowing that Superman risks messing up his own history. A spiky relationship has transformed into a nascent friendship, as Superman has seen what a hero Booster - initially presumed to be a selfish glory hound - is.

Dan Jurgens’ arc just keeps on getting better, with this issue brimful of excellent character moments and story beats. From the insight into Lois’ relationship with father Sam Lane, to son Jon seeing what a formidable heroine his Mom is, to a Superman who’s finally started listening to the advice of experienced time cop Booster, this is a fine read.

There’s a standout piece of internal dialogue from Lois:
‘Normally I’d ask Clark for help but he’s God-knows-where - or when - trying to find his own father. So it’s up to me. And I’m up to the task’.
Lois isn’t all action heroine, we see from her interactions and responses what a compassionate woman she is, while Clark gets to be confident without tipping over into cockiness. And good on Jon for being smart enough to not jump into the fray at the first sign of trouble for Lois.

Hambi, Bohanna and the unnamed pilot are nice additions to Lois’ story and I’d be happy to see any of them again... Hambi could easily be slotted into a Metropolis storyline via an exchange job at the Daily Planet, giving us the chance to see the City of Tomorrow through the eyes of an outsider. Bohanna, who carries herself with amazing grace while risking her life in a war zone, deserves more than a single appearance. And the fact that Sam Lane inspires his men, that’s something I wasn’t expecting - between the pilot and Lois, the belligerent general gets a spot of redemption without even appearing on panel.

Jurgens drops a dialogue Easter egg for readers of Silver Age Legion of Super-Heroes stories with a mention of a future war between Earth and Krypton, but this is DC Comics, everything old is new again, eventually.

I’ve said this previously, but I’m so tired of the ‘kneel before Zod’ business and it comes up again here... still, it hardly wrecks a splendid read.

And the art, wow! Will Conrad, recently seen on the excellent Fall and Rise of Captain Atom mini-series, and regular colouring collaborator Ivan Nunes tell the story with real skill; whether it’s Lois’ arrival in Logamba or the reveal of the prime Eradicator, this is sleek, but never soulless, work. A Lois special illustrated by these artists would indeed be something special. 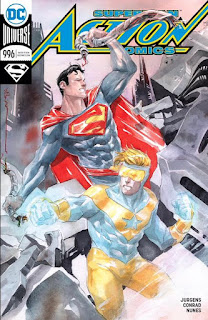 The regular cover by Jurgens, inker Trevor Scott and colourist Hi-Fi is nicely executed - I do like it when logos are used in the art - while the variant by Dustin Nguyen is a serene dream.

This serial continues to build - there’s no treading water with this middle chapter - and I can’t wait to see where things go next. When this year’s Superman issues are collected in various volumes, Booster Shot could be the best of the lot.