Batman and the Signal #1 review 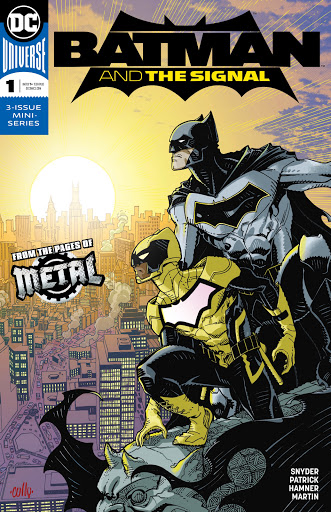 Kids are developing powers in Gotham, and Duke Thomas - newly minted hero The Signal - aims to get to the bottom of it. Gotham cop Alex Aisi is investigating from another direction. Both have personal reasons for wanting to know what the heck is going on.

Batman and the Signal is Duke Thomas’ moment to shine. There’s very little Batman in here, the focus is almost totally on the latest Bat-sidekick. Oops, sorry, it’s already been stated that Duke isn’t going to be a sidekick, he’s not a Robin in training... despite his shortlived We Are Robin gig. Batman even says so once more in this first of three issues. 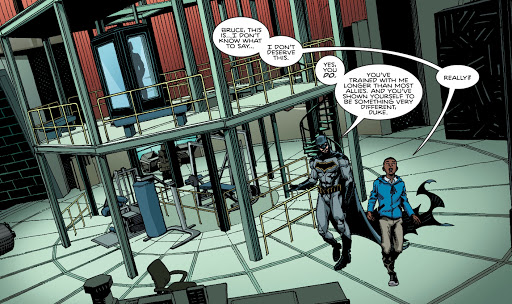 I’ve not seen Duke’s unique selling point, but he’s a smart, good kid, so let’s give him a chance.

The opening of this book could not be more on the nose, as writers Scott Snyder and Tony Patrick throw down the gauntlet. 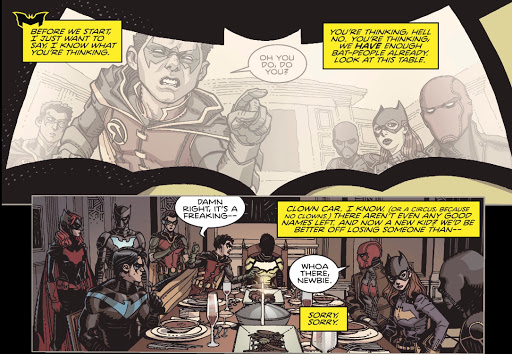 Why does Gotham need another member of the Batman Family, there’s already a veritable Bat-talion. The obvious answer is ‘diversity’, it’s rather nice to have another non-Caucasian in there alongside Cassie aka Orphan. Character-wise, though, what does Duke have to offer? Well, for one thing, he’s recently discovered he has powers, courtesy of the Metal crossover. 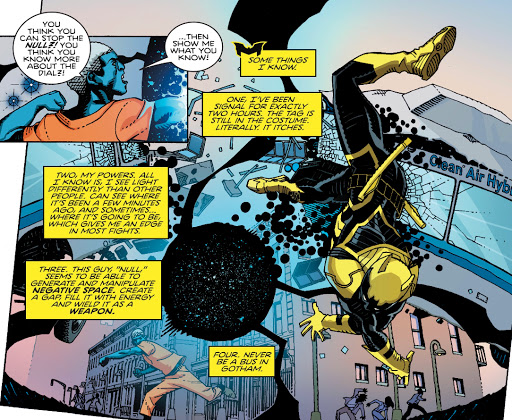 Got that? I haven’t. He can see where light has been, and maybe where it’s going to be?

The other unique selling point of this book is that it stars a Bat-side... oops, sorry, partner - who operates in the daytime! Yep, the conceit that Batman and co only go out at night - the daftest idea since Batman Is An Urban Legend - is back with us. We’re meant to accept that the criminals of Gotham honour some kind of Bat-curfew and never get naughty in the daytime. Certainly these solid citizens of Gotham Narrows believe it. 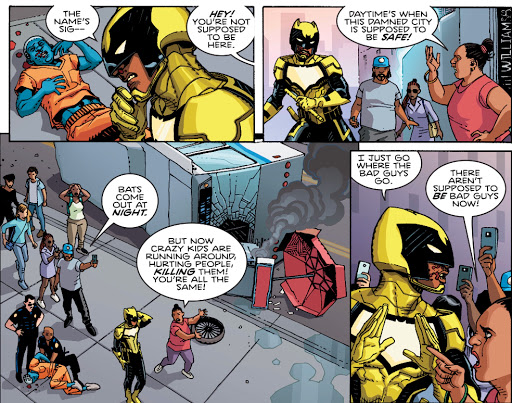 Apparently they think Batman and co are either vampires or daytime soap opera addicts. It really is very silly. OK, I accept that most crime will occur at night, because shadows are handy for springing from, gun in hand... but such a large proportion that up until now no one bothers with a daylight robbery?

The night/day contrast is further emphasised with the introduction of GCPD detective Alex Aisi, who has recently transferred from night shift to daytime duties.

It seems her arm was lost lately, in connection with the appearance in Gotham of mutant kids. I wonder if a personal injury payout covered the cost of that non-standard prosthetic arm.

If you’re not a Batman reader, Let It Be Known that The Narrows is Gotham’s version of Metropolis’s Suicide Slum, a place of poverty and pain, but plucky people aplenty, such as Harper and Cullen Row, created by Snyder during his time as regular Batman scribe.

As well as Alex, who’s probably less cybernetic than Marvel’s Misty Knight, we meet another new - to me, at least - character in Uncle Jay. I thought Duke was living at Wayne Manor, but apparently he’s under the care of Uncle Jay, who lays down the law... 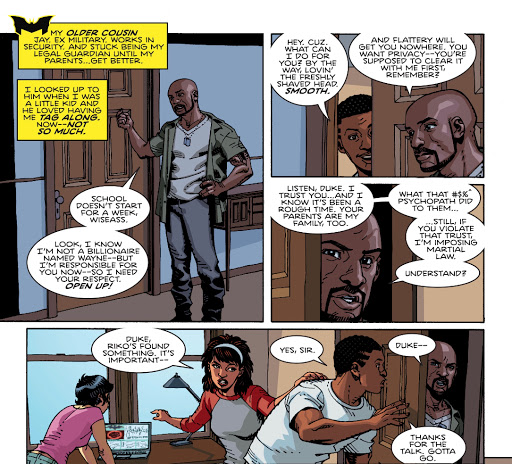 Anyway, despite the daytime/nighttime business, this is a very readable debut issue. A couple of aspects of Duke’s powers are defined as the book goes on, and Patrick’s narration makes Duke good company. The emerging mutants storyline doesn’t excite me, and I’m not convinced by Alex’s apparent belief that there’s something fundamental in Gotham that would stop people developing powers without an outside agency.

Still, there’s enough going on to bring me back for the second issue. Maybe we’ll even see more of the top-billed star beyond a brief moment of gift-giving... if not, that’s fine by me, it’s Duke who needs room to develop. If that means pretending this is a proper Batman comic, fine.

That’s the second time in one page we get a reference to the non-slummy sections as ‘Gotham Proper’. I call it ‘trying to make Fetch happen’. It’s just ‘Gotham’, with neighbourhoods.

I like that Duke’s We Are Robin time is fully embraced, with characters from that series showing up, and the idea of weekly Bat-breakfasts is a hoot, please let it be more than Duke’s dream. I’m glad he’s no longer thinking of Lark as his superhero name, it is, as Batman suggests, a tad wet - but the reasoning behind Signal is awkwardly contrived. 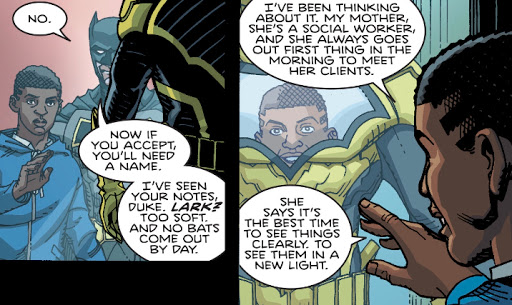 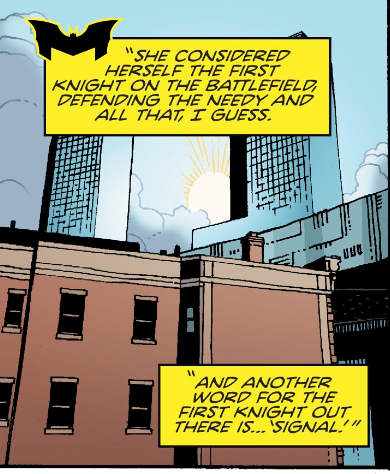 I was expecting him to be named for the Bat Signal - as it brings hope of help at night, he brings it to the daytime. Oh well.

Null has potential, and a decent visual. I doubt he’s related to old World’s Finest villains Null & Void, but I’d not be surprised if the ‘Dial’ he witters on about is the H Dial from DC history, which has a habit of giving teens powers. So the meta-kids wouldn’t be mutants after all. Phew.

Duke’s personal HQ is a bit underwhelming, with exercise kit, bike parking space and not much else: I guess Batman wanted to leave plenty of room for trophies. And I do hope he comes up with a name better than Batman’s - The Hatch would actually suit a Robin, or a Lark, but a Signal? Reader contest, please!

There’s some nice business about Duke’s super suit being so new it still has the label in it. I wonder if superhero tailor Peter Gambi (brother of Rogues stylist Paul) has opened a Gotham branch.

Patrick is a graduate of DC’s talent programme, and he likely emerged with humours, as his pacing is good and dialogue sharp. Working with veteran Snyder is a great jumping off point, and I look forward to him, like Duke, flying solo soon. Mind, I’m not sure ‘regroup’ can be used in a singular sense, as happens twice - ‘rally’, maybe? And at the end Duke tells us how long he’s been in the suit, but seems to be out by two hours.

Curly Hamner is another longtime servant of DC and Duke is lucky to have him. He brings a mastery of character to the book, and his layouts fair fizz with style. I’d be pleased were he to tweak the Signal helmet a tad, so it looks less like that of a Catwoman sidekick. And if he’s an outsourced independent, Duke needs to lose the Bat imagery.

Laura Martin’s colours are pretty darn snazzy throughout, as is the lettering of Derron Bennett, who looks to be homaging John Workman with his balloon shapes.

Hamner’s main cover is perfect for a book pretending Batman is the main attraction, but illustrator Declan Shalvey and colour artist Jordie Bellaire’s is the one that better represents the issue (I’m looking forward to seeing where the Signal Skipping Rope comes in). They’re both excellent. 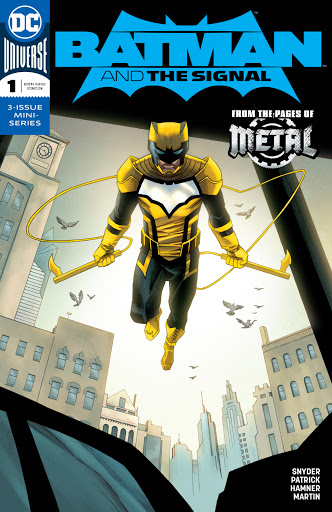 This isn’t a knockout first issue; there’s no big surprise to rival Thunderbolts #1, say, or character reinvigoration a la Giffen, DeMatteis and Maguire’s Justice League debut. It is a solidly entertaining, good-looking read, though, and definitely worth the cover price. If you have the spare cash, give Duke and friends a chance.