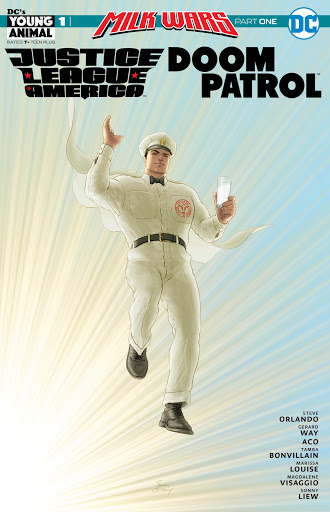 What have the Doom Patrol and Justice League of America got in common? They’ve both been based in the seaside town of Happy Harbor, Rhode Island, in a cave below a mountain. So the quiet community is the perfect spot for them to come together. Even before either group arrive, though, things take a weird turn. Say hello to Milkman Man. 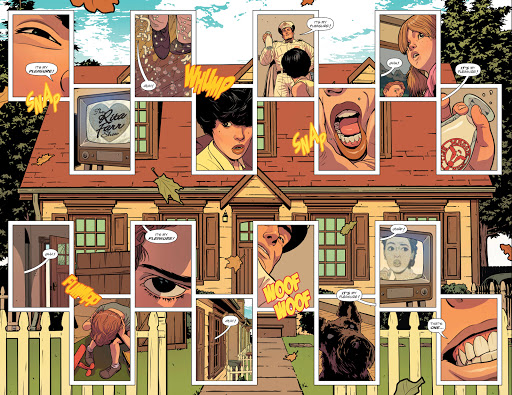 As special deliveries go, mystically murderous milk isn’t the most welcome. Hope arrives in the colourful form of Danny the Ambulance and his pet people. And plush. 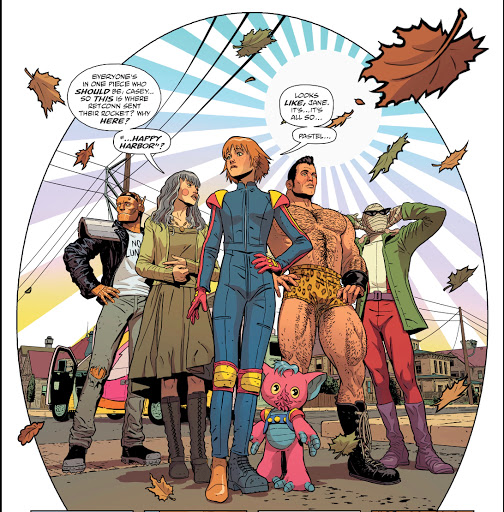 They enter the home of Gardner Fox, where it’s not a case of milk churning, but stomach churning - they’re confronted with not only dead bodies, but a monstrous goat.

Rather than rescue, the solid citizens who haven’t yet succumbed to a diet of deadly dairy want the ‘hooligans’ to go away - and community hero Carl Lobo intends to make that happen. 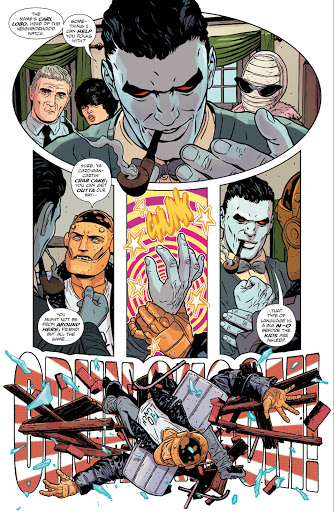 And after a crack of doom sounds, he isn’t alone... 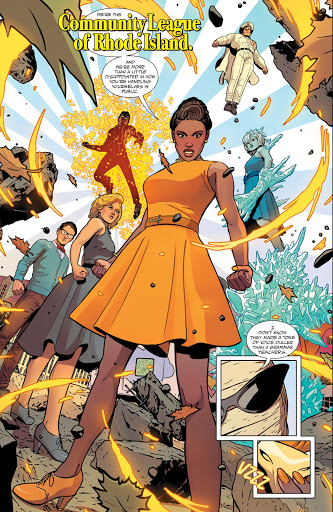 For once, Robotman (Cliff Steele), Crazy Jane (Kay Challis, but I wouldn’t bother), Space Case (Casey Brinke), Negative Man (Larry Trainor), Flex Mentallo and ‘What the?’ Fugg aren’t the world’s strangest heroes. That would be the transformed Justice League of America.

This Stepford League looks demure, but don’t let the cardigans and A-line skirts fool you - Vixen, Atom, Frost, The Ray, Black Canary and Lobo are angry. How dare these intruders unsettle suburbia? Jane tries to reason with leader Vixen, who’s trying to take down Negative Man... 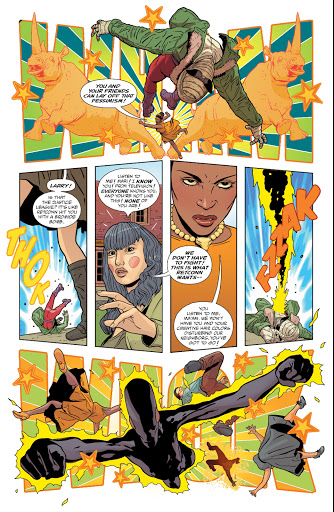 Elsewhere, in the offices of sinister extradimensional corporation Retconn, another drama is playing out - commerce. And the potential buyer of Earth Prime is a familiar face. 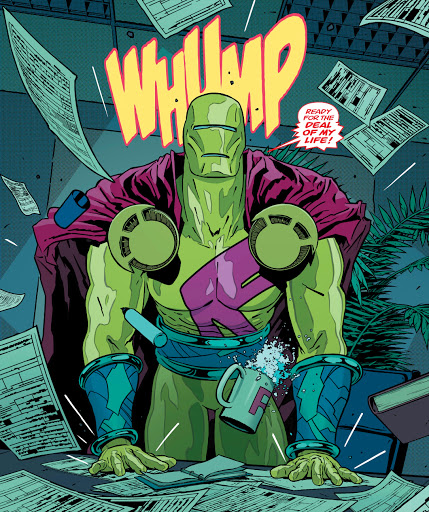 Back in Happy Harbor, the battle rages on, with no team looking set to emerge victorious anytime soon. Then Jane has an idea..

This is one wonderful comic book. In 36 pages, behind a blindingly good Frank Quitely cover, the Retconn subplot that’s been running in the Doom Patrol series moves from and centre, dragging in another of my current favourite DC teams, Steve Orlando’s Justice League of America. So it’s appropriate that Orlando joins Patrol author Gerard Way for the event opener, which explains Retconn well enough for JLA-only readers to get with the nutty programme. The result is a real winner, a massively enjoyable tale that manages to get very meta without disappearing up its own high concept.

It also gives us the best single showcase of the latest version of the Patrol to date; even in her origin issue, Casey Brinke wasn’t this well defined a character. There are also great moments with Cliff, Larry and Flex, but it’s Jane who really steals the show. One of her classic alternate personalities makes a comeback, and a massive difference, sparking the biggest moment in an issue that’s full of them.

And they’re all illustrated in instant classic style by Aco, whose extremely imaginative art has previously been seen in the likes of Midnighter and Nick Fury. His layouts are inventive, for example, milk bottle-shaped panels for the arrival of Milkman Man, and a hero-delivering lightning storm shown within its own sound effect. 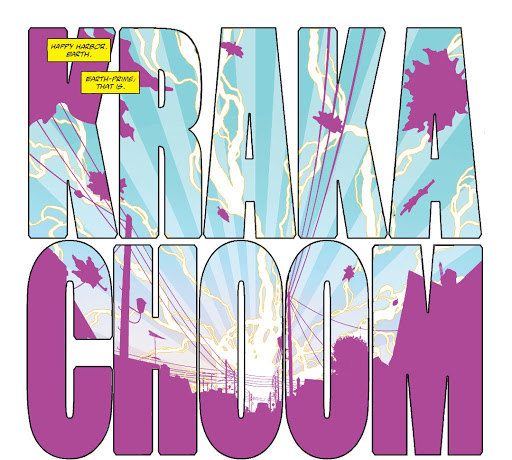 On the nose? You betcha. And they’re all the better for being so shamelessly literal. There’s none of your ‘cinematic’ storytelling here, every panel a monotonous letterbox; this is pure superhero comic book fun.

Every page has some outstanding aspect, with the quiet moments as fascinating as the bigger ones are dazzling. And then there’s the double spread - that’s four pages of comics - of the two teams sparring which shows you don’t have to be a plagiarist to produce pure Pop Art. I won’t demean it by shrinking it for this review - it has to be seen at full size, and in full context, when the massive moment has been earned. It’s just a shame it’s not been printed as a continuous fold-out.

Partnering Aco are two superb colour artists, Patrol regular Tamra Bonvillain and, in what seems to be her first DC work, Marissa Louise. I don’t know who did what and it really doesn’t matter, because there’s no tonal disparity - these comic creators know what they’re doing, and they’re doing it together.

Another Midnighter alumnus, Hugo Petrus, steps in for a single page, as the Patrol’s Rita Farr subplot comes closer to the surface. If you didn’t know he was there, you’d likely never notice, as Petrus very professionally matches Aco’s work.

The veteran of the creative team is Clem Robins, who’s been lettering for decades, long before there were computer font packages. I don’t know whether he’s still crafting the words manually, but one way or another this issue benefits from his personality-filled work.

While he’s associated with an earlier version of the League, the Bwaa-Ha-Ha bunch, Manga Khan fits into the Retconn business beautifully, and having a character named Gardner Fox in this issue is a nice tribute to the first writer of both the Silver Age League and its Golden Age predecessor, the Justice Society of America. This guy invented the super-team and were he not in Comic Legends Valhalla I think he’d approve of how Way, Orlando and friends are using the concept. The writers also nod to earlier years with Jane and Cliff referencing the end of the original Patrol. 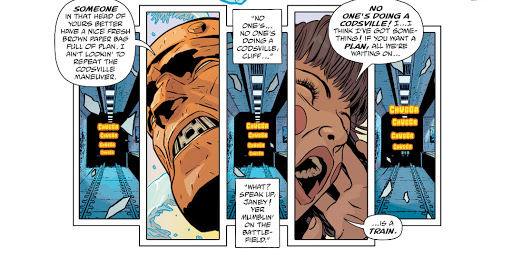 While this issue has many a flashy scene, my favourite is the spread in which Leaguers and Patrollers get to know one another, with the exchange between Frost and Crazy Jane especially heartening. 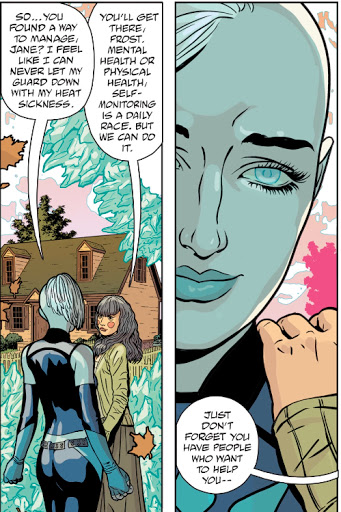 Another great instance sees the dreaming Larry revealed to have lived the life of the man who founded what would become DC Comics. Now that’s a deep cut, and one perfect for this particular issue.

But wait. That’s not all. A two-page back-up strip homaging Fifties sci-fi comics by writer Magdalene Visaggio, artist Sonny Liew and letterer Todd Klein is odd. And delightful. And maybe an alternate world version of Rita Farr. I dunno, I’ll get back to you if it actually continues anywhere!

Am I gushing? Because it’s the last day of January and I think I’ve just read the best comic of 2018. It has a witty, dramatic script, inventive visual storytelling, social satire, feels to melt the hardest heart and a love of the comics medium beating throughout.

Do not miss it.