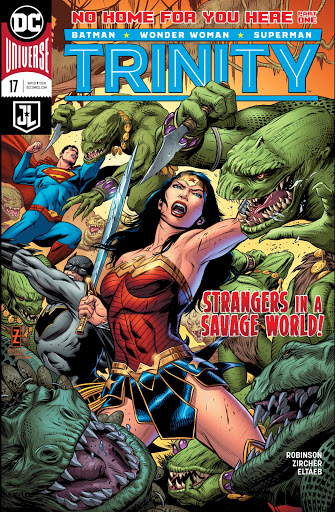 Superman and Batman are helping Wonder Woman search for Paradise Island, which has been hidden from her by godly hands. Signs of a possible interdimensional portal send the heroes flying to the North Atlantic. 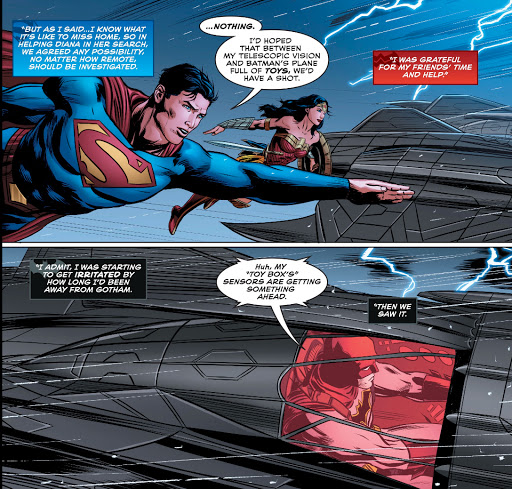 And they do indeed come across a doorway to another world; it may not lead to Themyscira, but it’s certainly worth investigating. More immediately, a small boat is being pulled towards its energies. Magical energies. 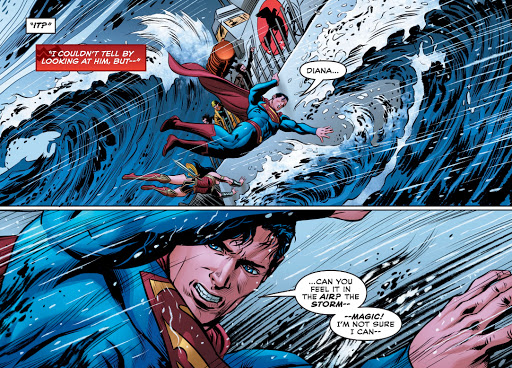 The heroes save the vessel and its crew, but get close enough that the doorway pulls them into another realm. Magic permeates the very air, negating Superman’s powers and causing - Diana posits - her to lose her sight. Not that she’s helpless.

Soon, they see they’re not the first people from the outside world to reach this place. 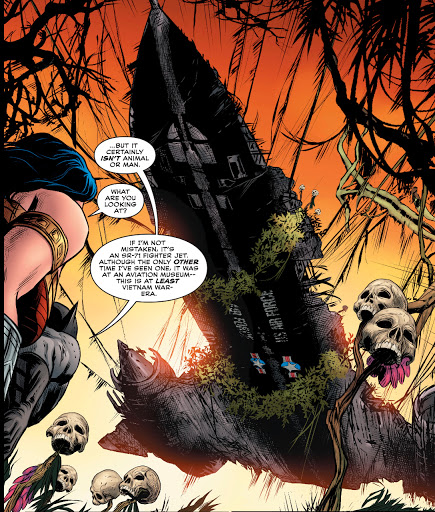 If you’ve been reading DC Comics awhile, you’ll have worked out just where our heroes have wound up, whose lost world they’ve entered. If not, I heartily recommended you buy this first issue by the new Trinity storytelling team of James Robinson and Patch Zircher. The set-up is simple, but it allows for nice moments of characterisation shedding light on the relationship of DC’s Big Three, their different approaches and personalities. I particularly like that Superman has had such a rotten time with magic over the years that he can pretty much sense it. And of course the Amazons train with blindfolds, it’s just one more restraint. I’m not usually a fan of back-and-forth narrations, and here we do have Diana, Bruce and Clark narrating, but Robinson has their voices down pat, so the three perspectives complement rather than clash. The narrations are set up by a framing sequence in which Zircher shows how a fine artist can show personality through body language.

Zircher apparently spends a great deal of time sketching from life. Whether it’s the pitch perfect facial expressions, the fearsome waves, even something as ordinary as a chair, he impresses with his devotion to details. His placement of blacks for shadow and atmosphere is superb, and he’s not afraid of tricky compositions, such as that shot looking down at our heroes from the trees.

And when the storyline’s special guest star shows up on the last page, blimey, that is one manly man! It’s just a shame this is one of those comics where someone reckons it’s a marvellous move to put the title and credits at the end, rather than the beginning; if the title is linked to a surprise, OK, but otherwise, as here, it’s random and gets in the way.

Colourist Gabe Eltaeb looks to be having a whale of a time unleashing the unearthly oranges for skies and choosing sickly greens for lizard men, while Josh Reed’s lettering is exemplary.

Zircher and Eltaeb’s main cover is well composed and coloured, while Bill Sienkiewicz’s variant is worthy of a 1930s pulp mag - it’s stunning. 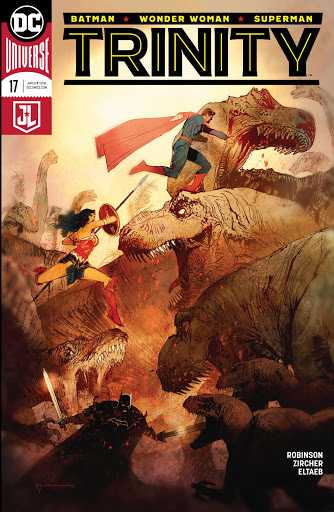 So if you fancy a story melding high adventure with superheroics, Trinity #17 has it all.